Bill Nye warns ‘the planet’s on f***ing fire’ as he calls on viewers to address the climate change ‘crisis,’ in profanity-laden tirade on HBO’s Last Week Tonight

In a profanity-laden tirade from one of TV’s most famous liaisons of science and learning, viewers were dealt a stark warning about the disastrous effects of climate change.

Bill Nye — most well-known for his popular 90’s educational television show, ‘Bill Nye: The Science Guy’ — reprised his iconic character in a cameo on the latest episode of HBO’s ‘Last Week Tonight with John Oliver,’ to highlight the world’s failure to address climate change.

Instead of Nye’s characteristic passion for science and learning, however, the commentator and TV personality delivered a different, more adult, kind of impassioned speech.

After instructing viewers to ‘put on your safety glasses,’ Nye launched into his plea.

In a profanity-laden tirade from one of TV’s most famous liaisons of science and learning, viewers were dealt a stark warning about the disastrous effects of climate change

‘By the end of this century, if emissions keep rising, the average temperature on Earth could go up another four to eight degrees. What I’m saying is the planet’s on f***ing fire,’ said Nye as he set fire to a wooden globe sitting on a disk in front of him.

‘There are a lot of things we could do to put it out — are any of them free? No, of course not. Nothing’s free, you idiots.

‘Grow the f**k up. You’re not children anymore. I didn’t mind explaining photosynthesis to you when you were 12. But you’re adults now, and this is an actual crisis, got it? Safety glasses off, motherf***ers.’

Nye proceeds to blow on the globe which is still sizzling as he storms off-camera.

In a separate segment during which Oliver enlisted Nye to help explain carbon pricing — a proposal to charge emitters of greenhouse gases more for their pollution — to give one of his signature demonstrations.

‘When we release carbon, say, by burning coal or driving an SUV, all of us pay for that in the form of things like fires, floods and crop failures,’ said Nye.

‘Putting a fee on carbon creates incentives to emit less carbon, and, more importantly, it also incentivizes the development of low-carbon technology, which is huge, because that’s vital to reducing emissions globally.’

But Nye wasn’t done yet.

‘And because for some reason, John, you’re a 42-year-old man who needs his attention sustained by tricks, here’s some f***ing Mentos and a bottle of Diet Coke. Happy now?’ 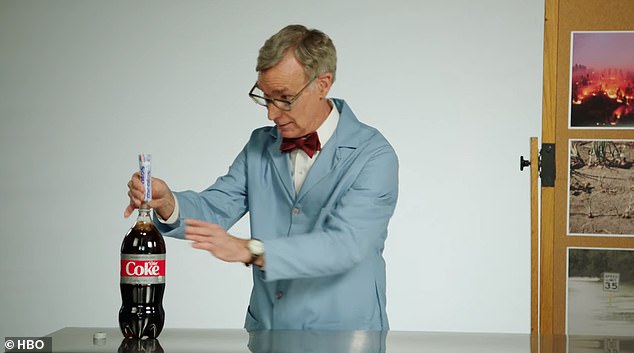 While Nye’s cameo on the show was played for laughs, a growing body of evidence has shown that humans efforts to mitigate climate change have fallen woefully short, and as a result, climate models have become increasingly dire.

This month, CO2 in the Earth’s atmosphere hit the highest levels in the history of the human race, rising to 415 parts per million.

Even if countries were to meet the benchmarks outlined in the Paris Agreement, signed by more than 170 world governments in 2016, the UN says the world is ‘locked in’ for temperature rises in the range of 3 to 5 degrees Celsius.

In Oliver’s latest episode, the host highlights various models of helping to slow the funneling of greenhouse gases into Earth’s atmosphere, like carbon cap and trade and a carbon tax.

The host also seized the opportunity to talk about the proposal and subsequent backlash of the ‘Green New Deal’ put forth by freshman US Representative, Alexandria Ocasio-Cortez.

Global sea levels could rise as much as 1.2 metres (4 feet) by 2300 even if we meet the 2015 Paris climate goals, scientists have warned.

The long-term change will be driven by a thaw of ice from Greenland to Antarctica that is set to re-draw global coastlines.

Sea level rise threatens cities from Shanghai to London, to low-lying swathes of Florida or Bangladesh, and to entire nations such as the Maldives.

It is vital that we curb emissions as soon as possible to avoid an even greater rise, a German-led team of researchers said in a new report.

Targets set by the accords include cutting greenhouse gas emissions to net zero in the second half of this century.

In addition, water naturally expands as it warms above four degrees Celsius (39.2°F).

Every five years of delay beyond 2020 in peaking global emissions would mean an extra 20 centimetres (8 inches) of sea level rise by 2300.

‘Sea level is often communicated as a really slow process that you can’t do much about … but the next 30 years really matter,’ lead author Dr Matthias Mengel, of the Potsdam Institute for Climate Impact Research, in Potsdam, Germany, told Reuters.

None of the nearly 200 governments to sign the Paris Accords are on track to meet its pledges.