The Most Dangerous Man In America by Bill Minutaglio and Steven L. Davis is a suitably head-spinning account of LSD High Priest Dr Timothy Leary

The Most Dangerous Man In America

Dr Timothy Leary was the godfather of the psychedelic 1960s. Turn on, tune in, drop out: that was his catchphrase. If everyone took LSD, he said, there would be no more wars. As if that weren’t reason enough, it was ‘the most powerful aphrodisiac ever discovered’.

Between September 1970 and January 1973, he was also an international fugitive. This book describes a ‘madly careering 28-month global hunt for one man’, as the authors put it in characteristically breathless style.

The chase began with his escape from the Californian jail where he was serving a ten-year sentence for possession of cannabis – two burnt-out joints found in his car ashtray. The imbalance between punishment and crime shows how desperate the authorities were for any excuse, however piffling, to put the high priest of LSD out of circulation. 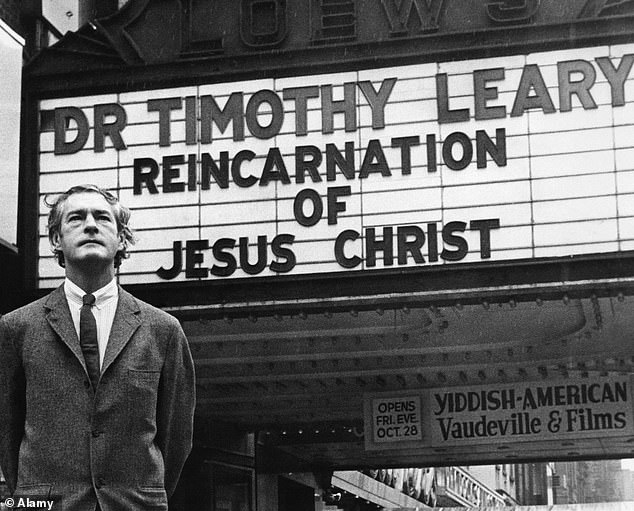 This book tells the story of the time spent on the run by Dr Timothy Leary, the godfather of the psychedelic 1960s, once dubbed ‘the most dangerous man in America’ by President Nixon

The jailbreak was possible only because he had wangled a transfer to a low-security prison by scoring perfect marks on personality tests. Leary knew how to make himself appear as docile as possible: he had designed many of the questions himself, in his previous incarnation as a Harvard psychologist.

His academic career had ended in 1963 after he discovered the joys of LSD, then a little-known chemical. Sacked by Harvard for urging students to join him on acid trips, he spread the hallucinatory gospel more widely. His 1970 prison escape was financed by the Brotherhood of Eternal Love, a group of hippies, bikers and surfers who had made a fortune producing a form of LSD called Orange Sunshine.

This book, told mostly in the present tense, is also suitably head-spinning. As Leary cartwheels across four continents – from Chicago to Paris, Algiers to Cairo, Geneva to Vienna, Beirut to Kabul – he seldom tries to hide his whereabouts, not least because he is usually out of his mind on drugs. Yet somehow he evades his pursuers from the FBI and the CIA.

When penury looms, a cheque arrives in the nick of time from John and Yoko. And wherever in the world he fetches up, there is usually a rich hippy to provide a safe house – and drugs galore. The dizzying odyssey ends when a US agent kidnaps Leary in Afghanistan and escorts him back to Los Angeles.

In Folsom State Prison, an unseen convict in the neighbouring cell whispers through the air shaft: ‘I knew you’d end up here.’ It is Charles Manson, another 1960s burn-out.

‘We were all your students, you know,’ the psychopath reveals. But he disagrees with Leary’s assertion that life is ‘all love’. It is, Manson says, ‘all death’.

At Leary’s own deathbed, in May 1996, his final words were: ‘Why? Why not? Beautiful.’ A year later seven grams of his ashes were blasted into space aboard a Pegasus rocket.

Once described by President Nixon as the most dangerous man in America, Dr Timothy Leary remained in orbit for six years until the rocket burned up on re-entry to Earth’s atmosphere, scattering his ashes around the planet. In death as in life, he was high as a kite.