THE HISTORY OF MAGIC

The 2011 Census revealed that 56,620 of us said we were pagans, 11,766 described themselves as Wiccans and 1,276 people confessed they were signed up to witchcraft. Twenty-seven per cent of the British population also maintained that ‘communication with the dead is possible’.

Some may scoff, but how many of us are made uneasy by a black cat crossing our path, Friday the 13th, walking under ladders, breaking a mirror and spilling salt? Feng Shui is popular, as are the reading of palms or tea leaves, touching wood, crossing fingers, visiting spirit mediums and sitting around a Ouija board.

Many millions glance at their horoscope in the paper every morning. Peter Sellers glanced at several, until he found the one he wanted to believe in.

Chris Gosden has penned a new book exploring the history of magic, as a Census reveals a portion of the British population practices witchcraft. Pictured: Stonehenge

We are superstitious creatures, doing our utmost, in the words of this book, ‘to keep out the devil’.

I was never convinced by the argument that as institutional religion took hold, magic declined and, indeed, the deep fascination of Gosden’s book is that it shows how religion and magic can be seen as the same thing — ‘a humanisation of the universe’, a way of comprehending and quantifying matter and energy, a search for structure.

Magic was an early version of science and medicine, with its incantations against snake bites and scorpions. Herbs and compounds were ‘magic cures’ that later shaded into pharmacology.

Stonehenge, built 3,000 years BC, was ‘an instrument of astronomical calculation of great sophistication’, intended to link the movement of bodies in the sky with the cycle of the year and ‘that of human life and death’. Glastonbury is at the centre of the network, ‘connecting up the religious sites of Ancient Britain into a cosmic grid’.

Gosden goes back thousands of years further still and ranges across the world to gather his evidence — Turkey, Iraq, China, Aboriginal Australia and Egypt — establishing that tribes and societies, no matter how disparate, had the common denominator of wanting some means of harnessing human and supernatural powers, so they devised rituals, altars, shrines and figurines, and came up with ‘an active system of magic, full of blood, fear, procreation and death’. That covers most things, I think.

Archaeological digs from Tibet to Tasmania have unearthed priestly regalia, wands, masks and amulets. Clusters of stones at burial sites map the phases of the Moon, and may be interpreted as primitive calendars, which plot the appearance of meteors and the meaning of cloud formations. 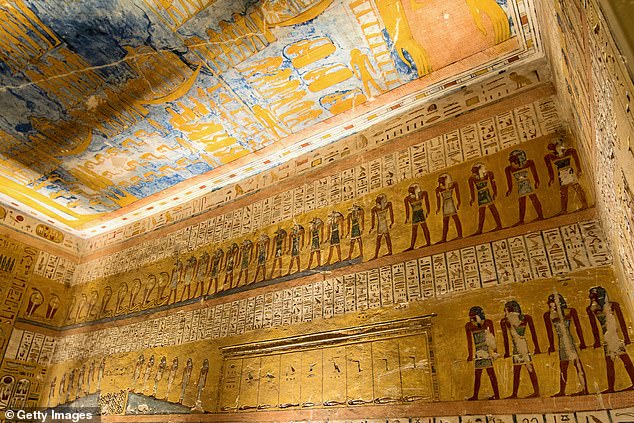 Chris explained that the position of plants and stars have been viewed as vital indicators for understanding the state of things on earth. Pictured: An Egyptian tomb

‘The position of planets and stars were vital indicators in the heavens of the state of things on earth,’ says Gosden. Vital, because what counted was the weather. The heavens had to be watched and appeased to guarantee a good hunting season and plentiful harvests of wheat, barley and oats.

‘Famines resulted from divine displeasure,’ it was believed.

It was always hoped the dead could intercede, hence the prevalence of elaborate ancestor worship, many tribes keeping skulls dangling from the ceiling, or bodies under the floorboards, within easy reach. Our modern equivalent is the photograph, kept in pride of place, with a candle nearby. Fertility rites, the celebration of spring, blood sacrifices, ‘chanting, drumming, dancing, sensory deprivation and the use of drugs’ — from the Aztecs to 1960s flower-power hippies in California, everyone was doing things with feathers, shells and bones to ward off disaster and disease, bring rain, give peace a chance. 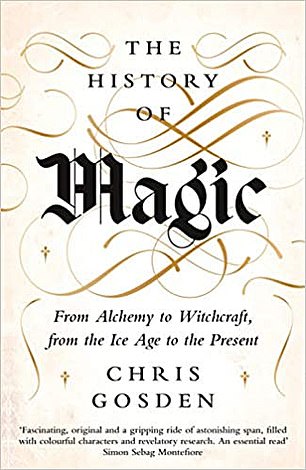 The purpose of magic, as of religion, is to show that something other than what we see with our own eyes is possible. It speaks to our need for an illusion of perfection, harmony, grace, as otherwise life is meaningless, which is why 80,000 witches were tortured and burned during the 16th and 17th centuries. Agents of Satan rather than Christ, they were said to bring harm or discord with their voodoo dolls and evil paraphernalia.

As this new book shows, what a lot survives from bygone ages — a lucky rabbit’s foot, St Christopher medallions, horse shoes over the door. There are still rural communities in Britain where old men carry potatoes in their pocket to ward off rheumatism, onions are hidden up the pub chimney to repel the Puritan temperance brigade and slugs are impaled on blackthorn to prevent floods.