One in three young Americans are at risk for developing severe COVID-19 if they contract the virus, a new study suggests.

The new research comes as young adults are making up a growing proportion of coronavirus cases.

Scientists at the University of California, San Francisco (UCSF) analyzed data on about 8,400 Americans between ages 18 and 44 and found that about a third of them have at least one risk factor for severe disease.

High rates of obesity, diabetes, asthma and, especially, smoking, could mean that the droves of young coronavirus patients being identified in the US could face hospitalization or even death.

A new University of California, San Francisco study found that one in three young Americans between 18 and 44 are vulnerable to getting severely ill if they catch coronavirus (file)

When coronavirus came to the US, public health officials warned that it was a disease that predominantly affects the elderly, and believed children people might even have some degree of protection.

It’s now abundantly clear that that is not the case.

Most healthy young people still only develop mild infections, and many have no symptoms at all.

But the virus does not discriminate and young adults are certainly not immune to getting infected or severely ill.

At the height of New York City’s  coronavirus epidemic, more than 40 percent of hospitalized patients were between 18 and 44.

In Florida, where new daily infections have hit new record highs every few days for the past two weeks, the average age of an infected person has dropped from 65, in May, to 35.

Hospital systems in parts of Texas have nearly buckled under the weight of coronavirus patients. More than half of the infected people there are under 45. 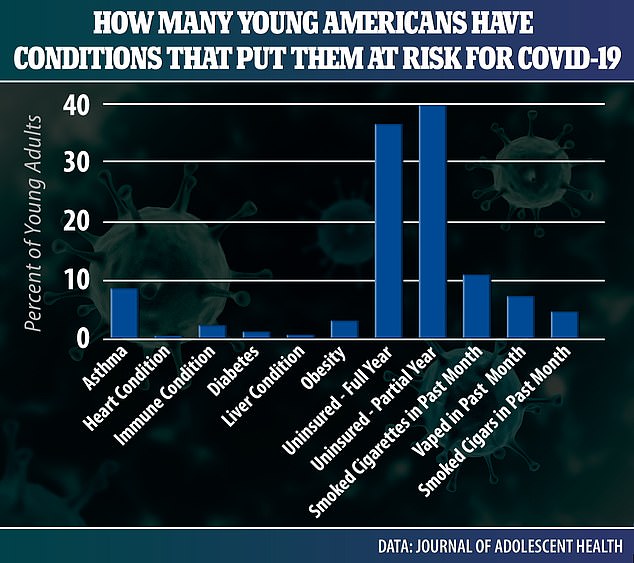 Nearly 40% of young adults in the US have been uninsured for at least part of last year, three percent are obese, nearly 11% smoke and nearly 8% have asthma

It’s much the same in Arizona. More than half of the nearly 124,000 people who now have coronavirus in the state are between 18 and 44.

Officials in some states have leaned on the generally low rates of serious disease among young coronavirus patients as evidence that even with reopenings proceeding, daily fatalities will continue to decline.

But upticks in the number of deaths are beginning to appear in states like Florida and Texas, and the new study suggests those increases will only grow steeper as the virus continues to spread among young people.

The UCSF team analyzed Centers for Disease Control and Prevention (CDC) data on about 8,400 young adults.

Another 1.2 percent of the group had diabetes, and three percent were obese.

Developing evidence suggests that coronavirus damages far more organs than just the lungs, as previously thought, including the liver and pancreas – the latter of which is involved in diabetes.

Moreover, people who are obese have a higher baseline level of inflammation, and it’s often the body’s out-of-control inflammatory response to coronavirus that kills patients. 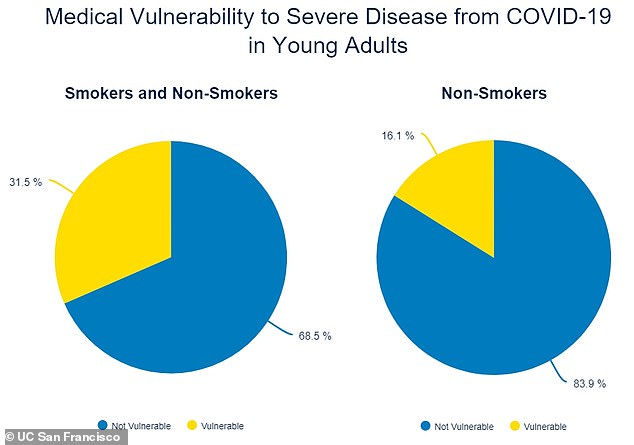 Rates of medical vulnerability – including chronic health conditions and lack of insurance – were higher among young smokers than among non-smokers, the study found

The damage that smoking does to the lungs leaves them weakened to fight off respiratory infections like coronavirus.

Some early, controversial studies suggested that rates of hospitalization were actually lower among smokers, but pulmonologists and infectious disease specialists insist that smoking does raise COVID-19 risks.

Emerging evidence suggests that while smokers may not be more likely to catch coronavirus, their risks of dying of the infection may be higher.

‘Smoking may have significant effects in young adults, who typically have low rates for most chronic diseases,’ said study co-author Dr Sally Adams, meaning that smoking may have a more dramatic effect on their risks of severe disease because they have fewer confounding risk factors.

The UCSF study, published in the Journal of Adolescent Health, found that nearly 11 percent of 18- to 44-year-olds in the US had smoked cigarettes in the past 30 days, 7.2 percent had vaped and 4.5 percent had smoked cigars over the same time period.

‘Efforts to reduce smoking and e-cigarette use among young adults would likely lower their vulnerability to severe disease,’ said Dr Charles Irwin, a second study author and physician in the UCSF Division of Adolescent and Young Adult Medicine.