Facebook is taking a stance on anti-mask rhetoric by removing one of the largest groups dedicated to the topic for spreading misinformation.

As reported by The Verge, the group, called ‘Unmasking America!’ had about 9,600 members and had a self-proclaimed mission to ‘spread the TRUTH about masks!’

Facebook is removing some groups like the one pictured above for spreading misinformation about COVID-19, while others have remained on the platform

The group reportedly made several claims which have been widely debunked, including suggestions that masks obstruct oxygen flow and that wearing them has a psychological toll.

‘It is a psychological anchor for suppression, enslavement and cognitive obedience. When you wear a mask you are complicit in declaring all humans as dangerous, infectious and threats,’ a post in the group stated.

Facebook’s decision to take the group down came after an inquiry from The Verge and according to a comment given after its banishment, the company will assess other such groups on its platform.

‘We have clear policies against promoting harmful misinformation about COVID 19 and have removed this group while we review the others,’ Facebook spokesperson Dami Oyefeso told The Verge in an email.

Despite the group’s removal, The Verge reports that there are still plenty of other such organizations on the platform including the ‘Million Unmasked March’ group which has 7,800 members. 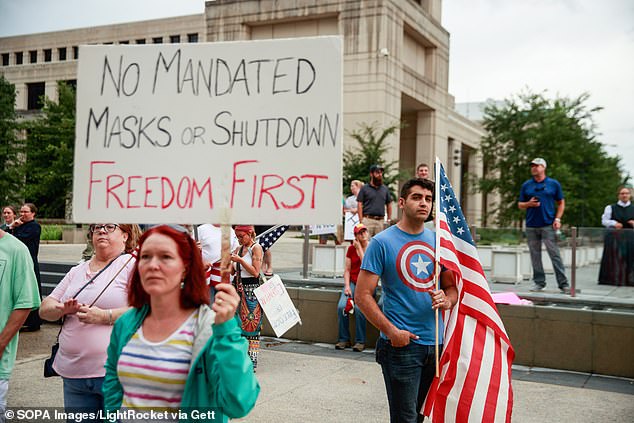 That group’s ‘About’ section reads:

‘We believe that our children wearing masks to school is physically and psychologically damaging. Join us in saying NO MORE MASKS!’

Facebook, like other major platforms, has at times struggled to tamp down on the influx if misinformation surrounding coronavirus.

According to a report from the human rights group Avaaz, just 100 piece of misinformation were shared 1.7 million times were viewed another 117 million times.