Lockdowns have not had a big impact on coronavirus death rates around the world, scientists have claimed, and the health of nations beforehand was more important.

Dozens of countries have been forced to tell people to stay home and close shops in a bid to stop the Covid-19 pandemic since it broke out in January.

But now a study has claimed the drastic measures don’t even work. They found that whether a country was locked down or not was ‘not associated’ with death rate.

Levels of obesity and the amount of money people had were two of the most influential factors for a country’s death rate, the study claimed.

High levels of obesity, with more than 30 per cent of adults seriously overweight, were linked to a 12 per cent increase in the number of deaths per million people.

A graph in the paper showed that countries with a median age over 40 suffered more than 150 Covid-19 deaths per million people, compared to fewer than 25 per million for those where the median average was below 30.

And a lower average income pushed the per-million fatality rate up by three per cent. This was measured against a middling income of $23,122 (£18,173).

The data could explain why countries such as Britain – with one of Europe’s worst obesity rates, and Italy, which has a high average age – have had such a high death toll despite tight regulations.

The early closure of international borders seemed to lower cases, but did not translate to real lives saved.

Numbers of nurses did protect lives, however, and countries with more than 6,000 nurses per million people saw significantly fewer deaths than those with half as many.

Despite the researchers’ insistence that lockdowns did not reduce death rates, they admitted that the drastic measures were linked to lower numbers of Covid-19 cases. 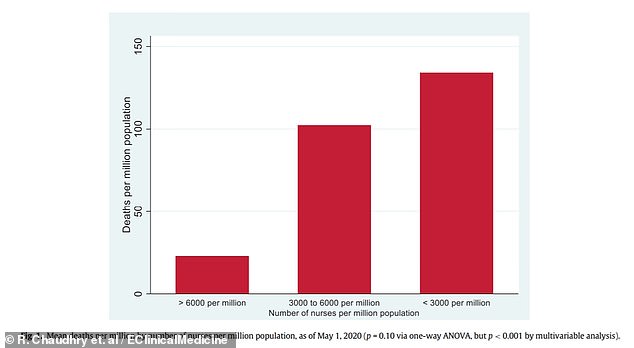 The study showed that countries that had more nurses per person had significantly fewer deaths from the coronavirus, and the opposite was true

The study compared mortality rates and cases in 50 different countries worst hit by the pandemic up until May 1.

WHAT FACTORS DID THE STUDY FIND TO BE IMPORTANT?

That rate, however, has since increased markedly, and is now at 80 per million globally, and still rising. Britain has seen 670 deaths per million.

The researchers constructed a mathematical model to measure the impact of each country’s response on coronavirus cases and deaths.

They then compared this to demographic factors such as age, smoking and obesity.

This was the UK Government’s primary aim when it imposed restrictions back in March – to protect the NHS and ultimately save lives.

Data in the study showed that the factors affecting the numbers of cases a country had were the time it took to go into lockdown, the ages and obesity of the population, how long it took to close international borders, and how much testing a country did.

Countries with higher average ages saw a 10 per cent increase in cases compared to a nation where the median age was 40.

WHAT DO OTHER STUDIES SAY ABOUT LOCKDOWN SUCCESS?

Another study from University of East Anglia suggested draconian stay-at-home orders and shutting all non-essential businesses had little effect on fighting coronavirus in Europe.

But the same scientists discovered closing schools and banning all mass gatherings did work in slowing outbreaks across the continent.

Other leading scientists have claimed Britain’s COVID-19 outbreak peaked and started to decline before the official lockdown began, arguing that Number 10’s drastic policy to shut the UK down was wrong.

However, some studies directly contradict the theory that lockdown was pointless.

A scientific paper from Imperial University in London published in June found lockdown likely saved almost half a million lives in the UK alone.

The UK, Germany, Spain, France and Italy each dodged up to 500,000 coronavirus deaths or more because of their draconian policies, the team estimated.

A separate study also published in June suggested around 500million Covid-19 cases were prevented by lockdowns in six countries, including the US.

Researchers measured how numbers of Covid-19 cases changed over the course of the pandemic and whether they dropped in the days following strict rules.

Physical distancing measures such as closure of schools, workplaces and public transport, a ban on mass gatherings, and full-scale lockdowns led to a larger reduction in cases when they were implemented early than late – 14 per cent compared with 10 per cent.

It took an average of nine days for countries to recommend social distancing once the first case was detected there. But some countries took far longer.

Britain was one of the slowest to introduce the life-saving lockdown measures along with Thailand, Australia and Canada.

It took 45 days from the first reported case, on January 31, for Prime Minister Boris Johnson to advise social distancing on March 16. The full lockdown didn’t come for another week, starting on March 23.

Cases shrunk by 17 per cent as a result, which was higher than the average but low compared to fast-reacting Andorra where cases dropped by 36 per cent.

The researchers said they had a ‘significantly higher caseload’.

The study also showed that a lockdown seemed to significantly increase the proportion of patients who recovered, despite its key finding that it did not reduce deaths.

Restricting movements and closing borders also had no significant impact on Covid-19 fatalities, even if early border closures appeared to significantly lower cases and lessen the peak of transmission, preventing hospitals from being overwhelmed.

Countries with widespread mass testing did not appear to have fewer critical cases, or deaths per million, the study claimed.

‘Government actions such as border closures, full lockdowns, and a high rate of COVID-19 testing were not associated with statistically significant reductions in the number of critical cases or overall mortality.

‘The number of days to any border closure was associated with the number of cases per million.

‘This suggests that full lockdowns and early border closures may lessen the peak of transmission, and thus prevent health system overcapacity, which would facilitate increased recovery rates.’

But the scientists didn’t find any evidence that this actually saved lives.

It was population demographics and underlying health – particularly obesity rates – which has determined which countries have been worst-hit by the virus, the researchers found.

Nations with above-average obesity rates were 12 per cent more likely to have significantly higher death rates than those without.

It’s relevant for Britain – which has one of the biggest obesity problems in Europe – with two thirds of adults and a third of children overweight.

The authors wrote: ‘Consistent with reported COVID-19 outcome data from Europe, the United States, and China, higher caseloads and overall mortality were associated with comorbidities such as obesity.’

Countries with a higher median population age were 10 per cent more likely to have a large caseload.

A surprising finding was that nations with higher smoking rates had fewer deaths.

It adds weight to the emerging argument that tobacco use may protect against coronavirus, with a slew of studies finding bizarrely low levels of smokers among hospital patients.

The researchers, however, warned the findings may just be because countries with high smoking prevalence tend to be those with younger populations.

Young people are less likely to get severely ill from the coronavirus, and therefore countries with a younger population have tended to be less badly hit by the pandemic.

The team also found wealthier nations had fared worse, probably because international travel meant more cases were imported at the beginning of the crisis.

This, they believe, is due to ‘accessibility to air travel and international holidays’, as ‘travel was identified as an important factor contributing to international viral spread’.

The team, writing in the Lancet online journal EClinicalMedicine, said: ‘Government actions such as border closures, full lockdowns, and a high rate of Covid-19 testing were not associated with statistically significant reductions in the number of critical cases or overall mortality.’

Some experts are skeptical of the findings, however, suggesting the findings have been exaggerated.

Professor Sir David Spiegelhalter of the University of Cambridge, said: ‘A large number of possible predictors are put into a model with only 50 observations, and then the resulting formulae are over-interpreted.’ 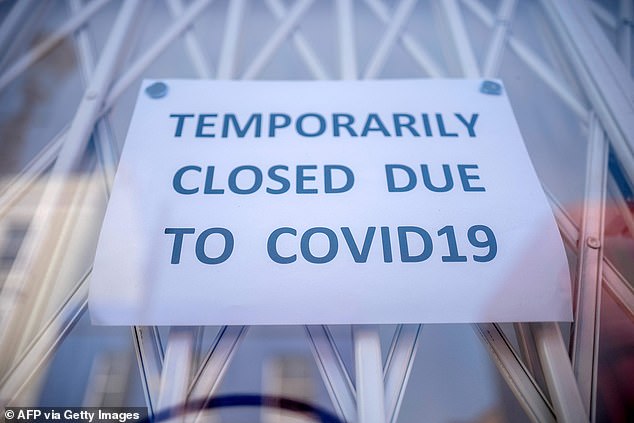 Lockdowns have not had a big impact on coronavirus death rates around the world, scientists have claimed. Pictured, a closed shop in Britain

Dr Louise Dyson of the University of Warwick, said: ‘While population demographics such as median age and obesity prevalence were found to be associated with increased mortality, this should not be interpreted as implying that these were more important than government interventions such as lockdowns.’

It comes amid mounting concern that the full-scale shutdown on Britain’s movement will have devastating consequences.

The resulting economic impact is expected to drive up physical and mental health problems both in the short and long term.

Professor Mark Woolhouse, an infectious diseases expert at Edinburgh University and a member of the UK Scientific Advisory Group on Emergencies, warned earlier this month: ‘When the reckoning comes we may well find that the cure turned out to be far worse than the disease.’

But other British scientists have been adamant the lockdown was necessary, and was so important it should have been enforced weeks before it was, on March 23.

Professor Neil Ferguson – the academic whose work led to Britain’s lockdown – says the lockdown likely saved almost half a million lives in the UK alone.

His team at Imperial University in London found coronavirus lockdowns across Europe probably prevented up to three million Covid-related deaths.

‘Professor Lockdown’ has also conceded that, in hindsight, tens of thousands of lives could have been saved if the lockdown had come a week earlier.

A separate study also published in June suggested around 500million Covid-19 cases were prevented by lockdowns in six countries, including the US.

SCIENTISTS FOUND LOCKDOWNS IN EUROPE HAD ‘LITTLE EFFECT’ ON TRANSMISSION

A study published in May suggested that draconian stay-at-home orders and shutting all non-essential businesses had little effect on fighting coronavirus in Europe.

But the same scientists discovered closing schools and banning all mass gatherings did work in slowing outbreaks across the continent.

University of East Anglia researchers said relaxing the stay-at-home policy and letting some businesses reopen could have been done sooner without jeopardising public health.

Other leading scientists have claimed Britain’s COVID-19 outbreak peaked and started to decline before the official lockdown began, arguing that Number 10‘s drastic policy to shut the UK down was wrong.

Transport use plummeted and fewer people were visiting GPs with tell-tale coronavirus symptoms the week before lockdown, suggesting the government’s call for the public to work from home where possible and to only take essential travel was effective enough.

They cautioned that the study, which was funded by the National Institute for Health Research Health Protection Research Unit in Emergency Preparedness and Response at King’s College London and Public Health England,wais experimental.

Banning mass gatherings, along with closing schools and some non-essential businesses, particularly in the hospitality sector, were the most effective ways at stopping the spread of the disease, the researchers found.

One of the scientists involved in the research, Dr Julii Brainard, said they found clear distinctions between which measures were more effective.

‘We found that three of the control measures were especially effective and the other two were not,’ she told BBC Radio 4 this morning.

‘It pains me to say this because I have kids that I’d like to get back into education, but closing schools was the most effective single measure, followed by mass gatherings.

‘[This was] followed by what were defined… as the initial business closures. So that was the point when, in the UK for instance, they closed gyms and clubs.

The research added to claims from Dr Johan Giesecke, of Stockholm’s Karolinska Institutet, that total lockdowns were unnecessary because the virus is unstoppable.

Although he admits the benefit of preventing hospitals from becoming overwhelmed which, the UK Government said, had been its aim all along.