The President of Belarus has announced he tested positive for Covid-19, after describing fears over the pandemic as ‘psychosis,’ and prescribing remedies including vodka and saunas.

Speakng ahead of the country’s election in two weeks time, Alexander Lukashenko, 65, told military leaders he caught the coronavirus, which has killed more than 500 people in Belarus, but said he recovered ‘on his feet,’ with no sign of any symptoms.

Public frustration over his handling of the pandemic, including a lack of any strict lockdown measures, has fuelled the biggest protests in years against his rule ahead of a presidential election on August 9.

The President of Belarus, Alexander Lukashenko, pictured in Minsk today, has revealed he tested positive for Covid-19, but was ‘asymptomatic’

He has jailed two of his main electoral rivals in a widening crackdown on dissent.

‘Today you are meeting a man who managed to survive the coronavirus on his feet. This is what doctors concluded yesterday. Asymptomatic,’ Lukashenko said.

‘As I said, 97% of our population carry this infection asymptomatically,’ he added. He did not give a source for that figure.

Belarus, with a population of 9.5 million, has registered 67,366 coronavirus infections with 543 deaths.

Lukashenko did not say when or how he might have contracted the virus. He met Russian President Vladimir Putin at a military parade in Moscow last month. Putin was fine, TASS news agency quoted Kremlin spokesman Dmitry Peskov as saying. 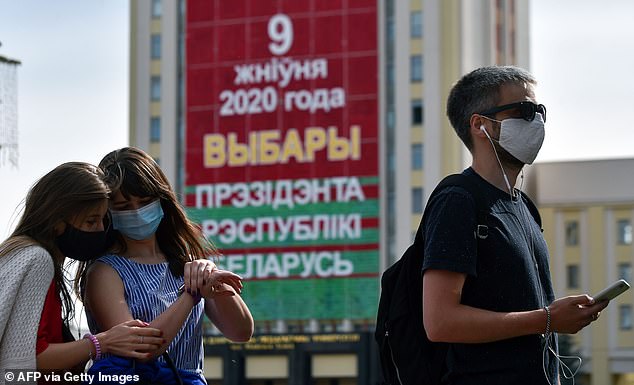 Lukashenko, a former Soviet collective farm boss, said in April that no one would die from the coronavirus in Belarus, and that any deaths would be a result of underlying conditions, such as heart disease or diabetes.

In stark contrast to other European countries, Belarus kept its borders open and even allowed soccer matches in the national league to be played in front of spectators.

His attitude sharpened discontent against the president, whose iron-fisted rule since 1994 saw him dubbed ‘Europe’s last dictator’ by Washington. 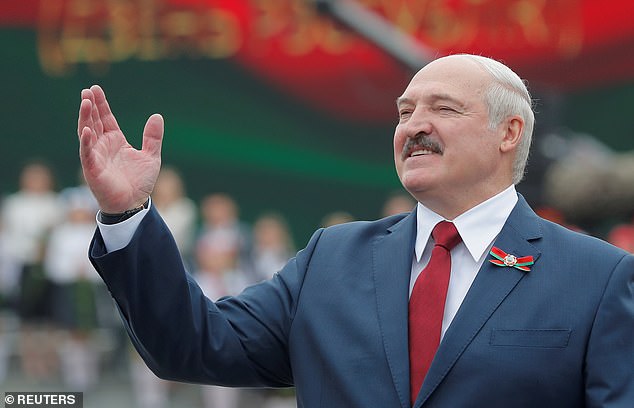 Lukashenko was speaking on Tuesday at a military base, after overseeing televised drills by special police who fired tear gas and used a water cannon in a practice crackdown on street protests. Lukashenko urged police to be tough.

‘Under no circumstances should you create provocations,’ he instructed the riot police chief. ‘But you also should not allow (the protesters) to insult the guys.’

Lukashenko has made several such visits to military units and the army staged exercises with tanks last weekend on the streets of Minsk.

‘The authorities hope that the display of muscle and threats will keep people from going out into the streets,’ he said. 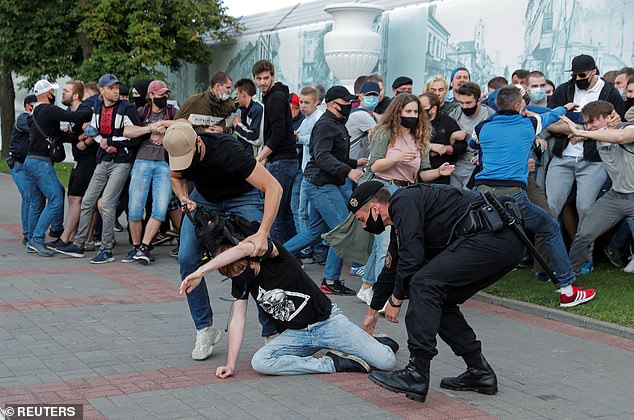 Human rights groups say more than 1,100 people have been detained in recent weeks. Protesters have rallied behind Svetlana Tikhanouskaya, the wife of one of the jailed candidates, who is campaigning in her husband’s place.

On Tuesday, several journalists were briefly arrested outside the state security service (KGB) headquarters, taken to a local police station and then released.

Lukashenko has compared the opposition to criminal gangs and accuses protesters of wanting to stage a violent revolution with the help of foreign backers. (Additional reporting by Polina Devitt in Moscow; Writing by Matthias Williams Editing by Gareth Jones and Nick Macfie)