A young family who ditched city life and half their income have said they have no regrets about quitting the rat-race to stay in a field.

Tom Jackson, 42, and wife Jen, 41, left their jobs as a corporate sales account manager and a teacher and sold their house in Bradford-on-Avon, Wiltshire, to start afresh.

The couple, along with their children Gilly, nine, and Flo, seven, used the money to buy a 13-acre plot near Bath, Somerset, while renting a place in their old town.

Tom Jackson, 42, and wife Jen, 41, (pictured with children Flo and Gilly) quit their jobs as a corporate sales account manager and a teacher and sold their house in Bradford-on-Avon, Wiltshire, to start afresh 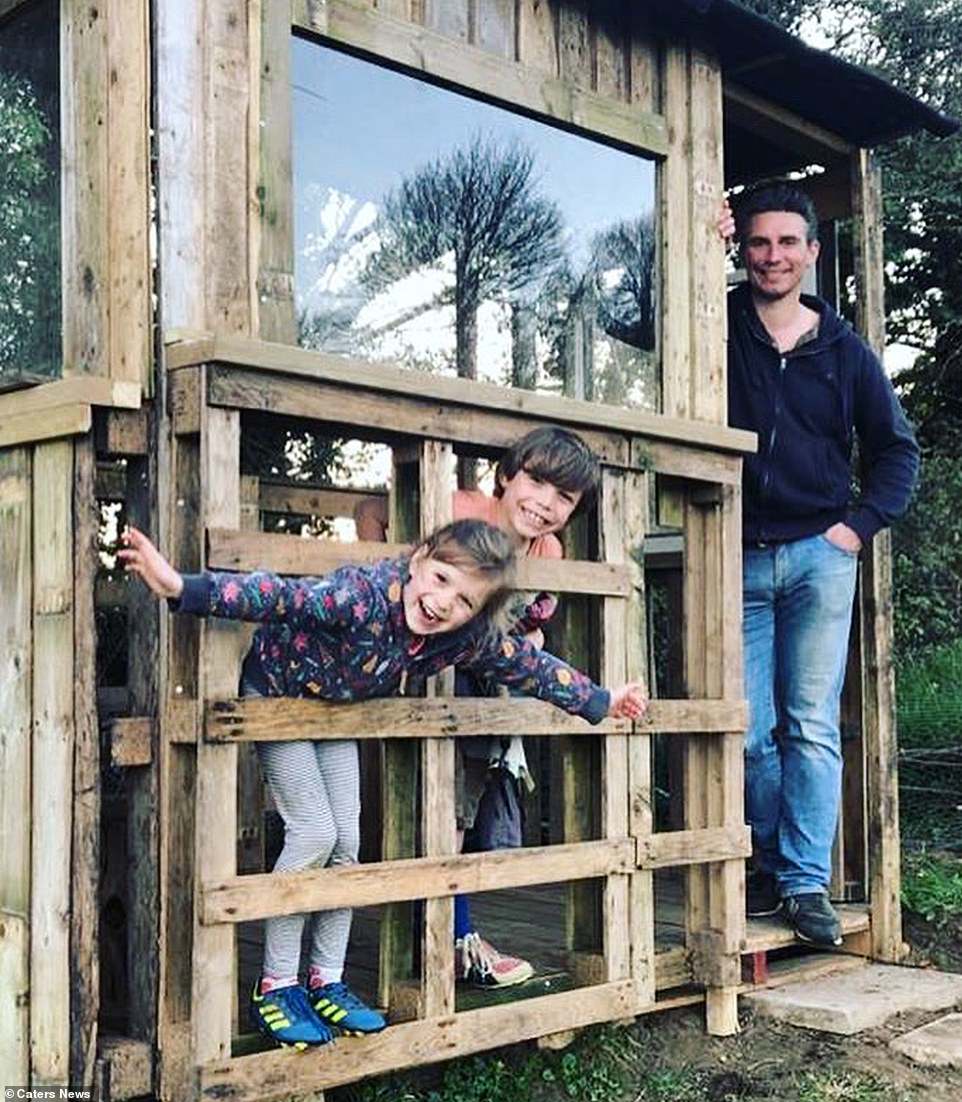 The couple and their two children – nine-year-old Gilly and seven-year-old Flo – used the money to buy a 13-acre plot (pictured) near Bath, Somerset 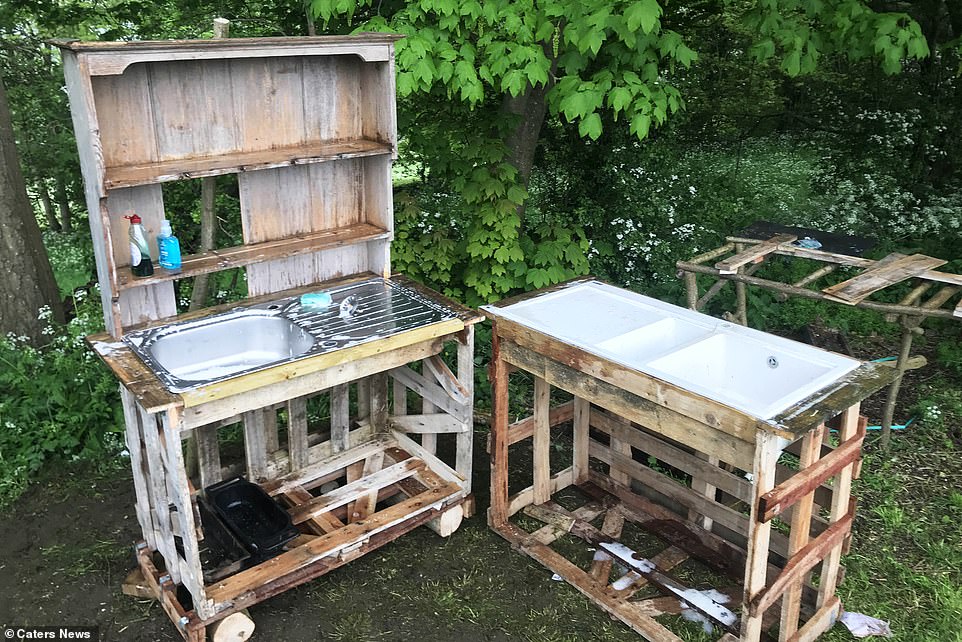 They have spent the last few months setting up their new lives on the land – dubbed Hazelwood farm – building an outdoor kitchen (pictured), bar and lounge area with a straw sofa 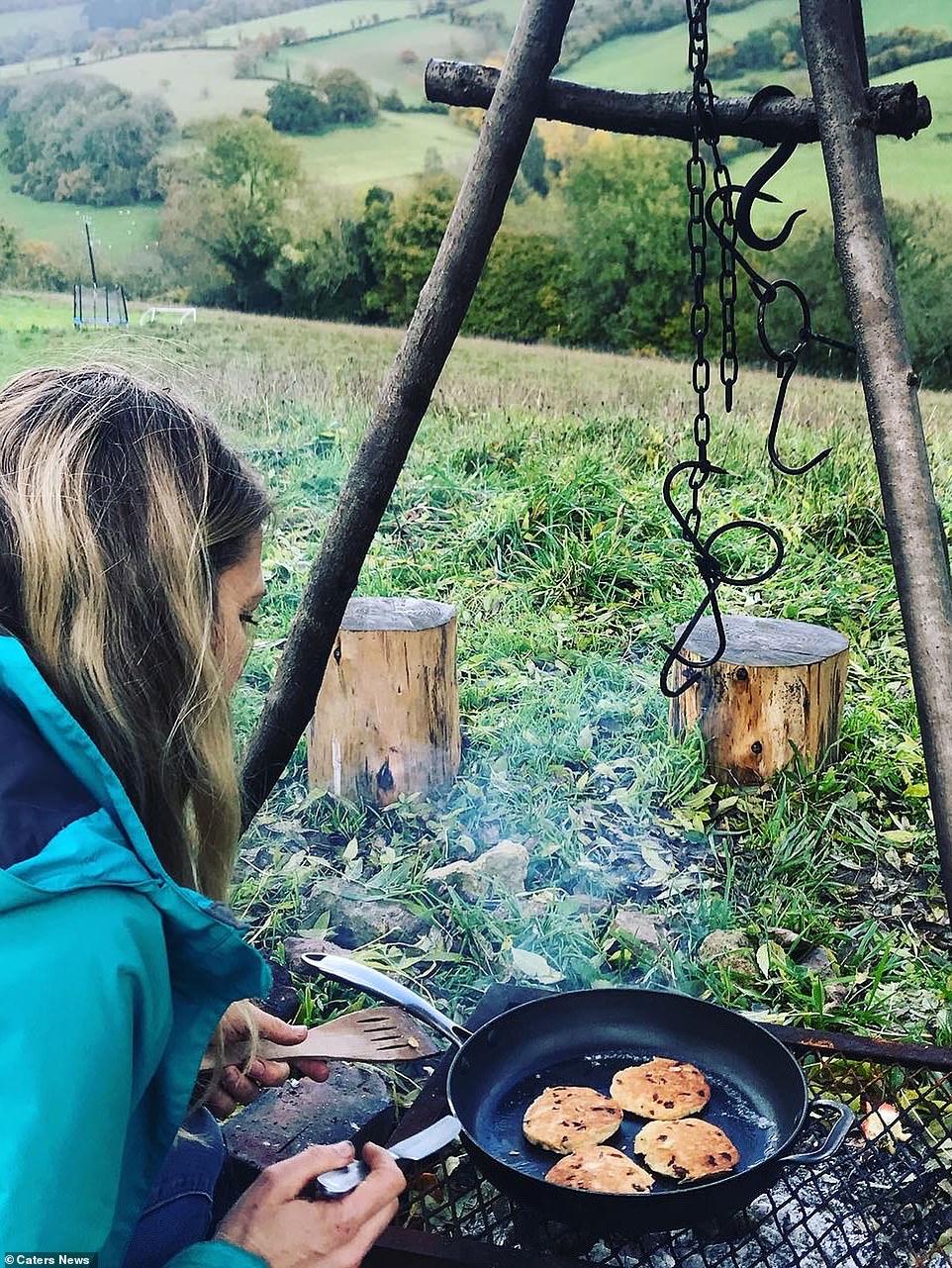 Mrs Jackson cooks up breakfast for the four of them on an outdoor stove they made at the site, with the rolling hills of Somerset in the background

The family, who featured on Channel 4’s Britain’s Best Parents, spent the first few months of the year in the sun setting up their new lives on Hazelwood farm, building an outdoor kitchen, bar and lounge area with a straw sofa.

Mr Jackson, who used to commute into central London, said the family are ‘winging the dream’ and ‘learning as they go’.

But he said they are sticking with their new lives, having planted fruit, vegetables, apples for cider, grapes for wine and hops for beer.

The family, who also rent a house in Bradford-on-Avon, have also set up a forest school and hope to launch back to basics courses and glamping pods in the future. 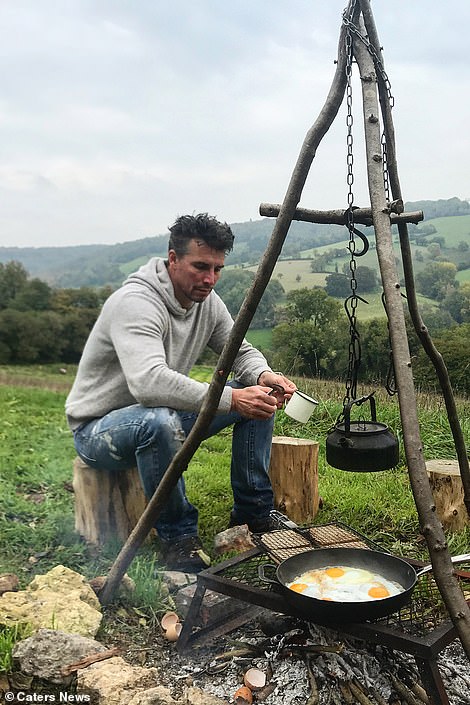 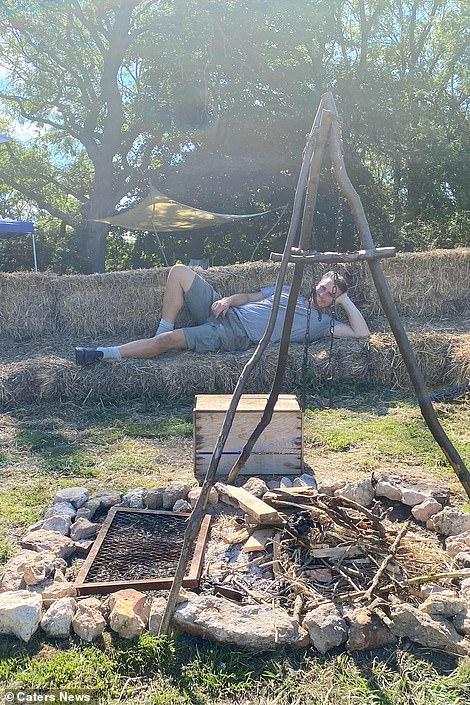 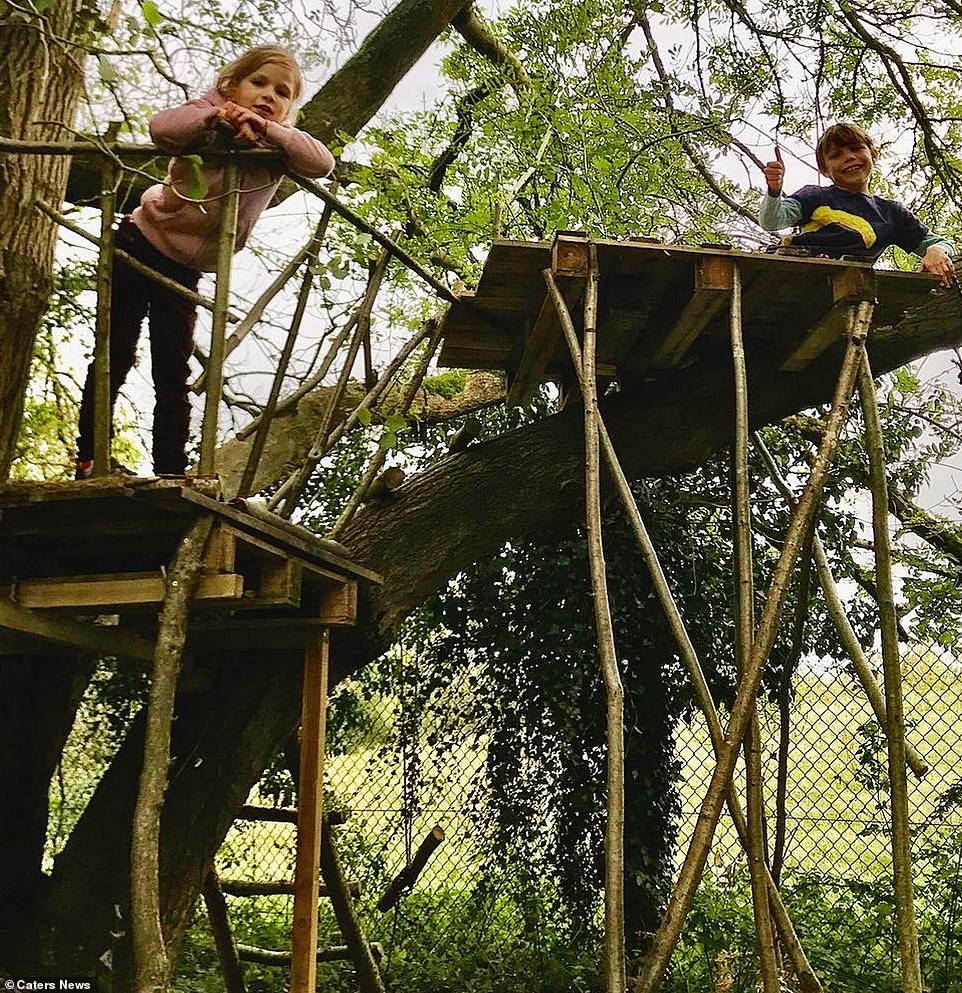 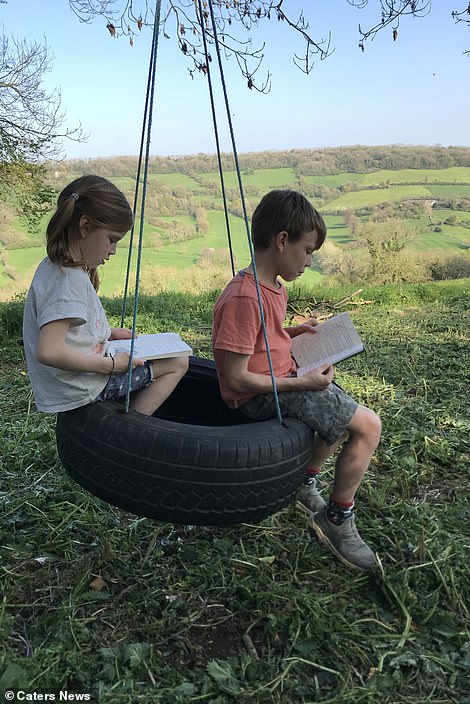 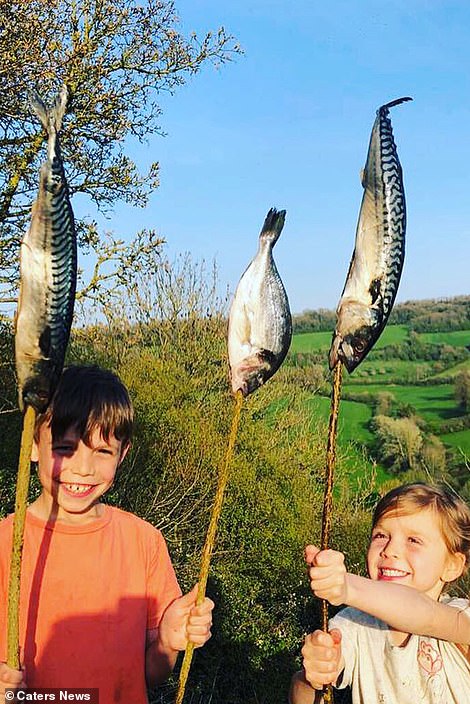 Mr Jackson said: ‘It was something we had thought about for a while and one day we just decided to go for it.

‘Some people might think we are a bit bonkers or crazy but the kids are the perfect age to enjoy it too and we just thought it would be madness not to have given them this experience when we could.

‘They are always outside digging holes, cooking on the fire and climbing trees rather than inside on computers all day and they love it as much as we do. Life’s for living and I don’t miss the daily grind at all.

‘Yes, our income has decreased by around 50 per cent but we save money in so many other ways like upcycling, making our own furniture, growing our own food and brewing our own beer. 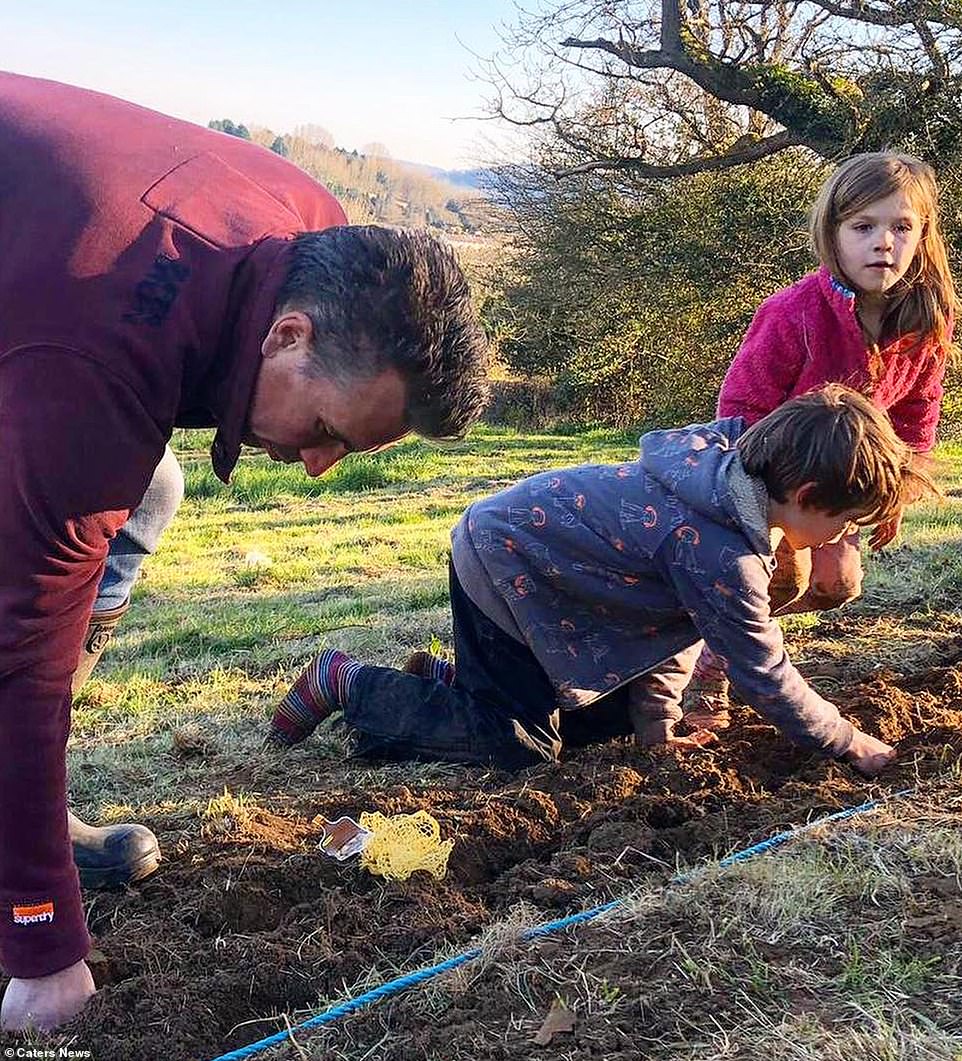 Back to basics: Mr Jackson teaches young Gilly and Flo how to plant seeds on their land as they look to live off the land in Somerset 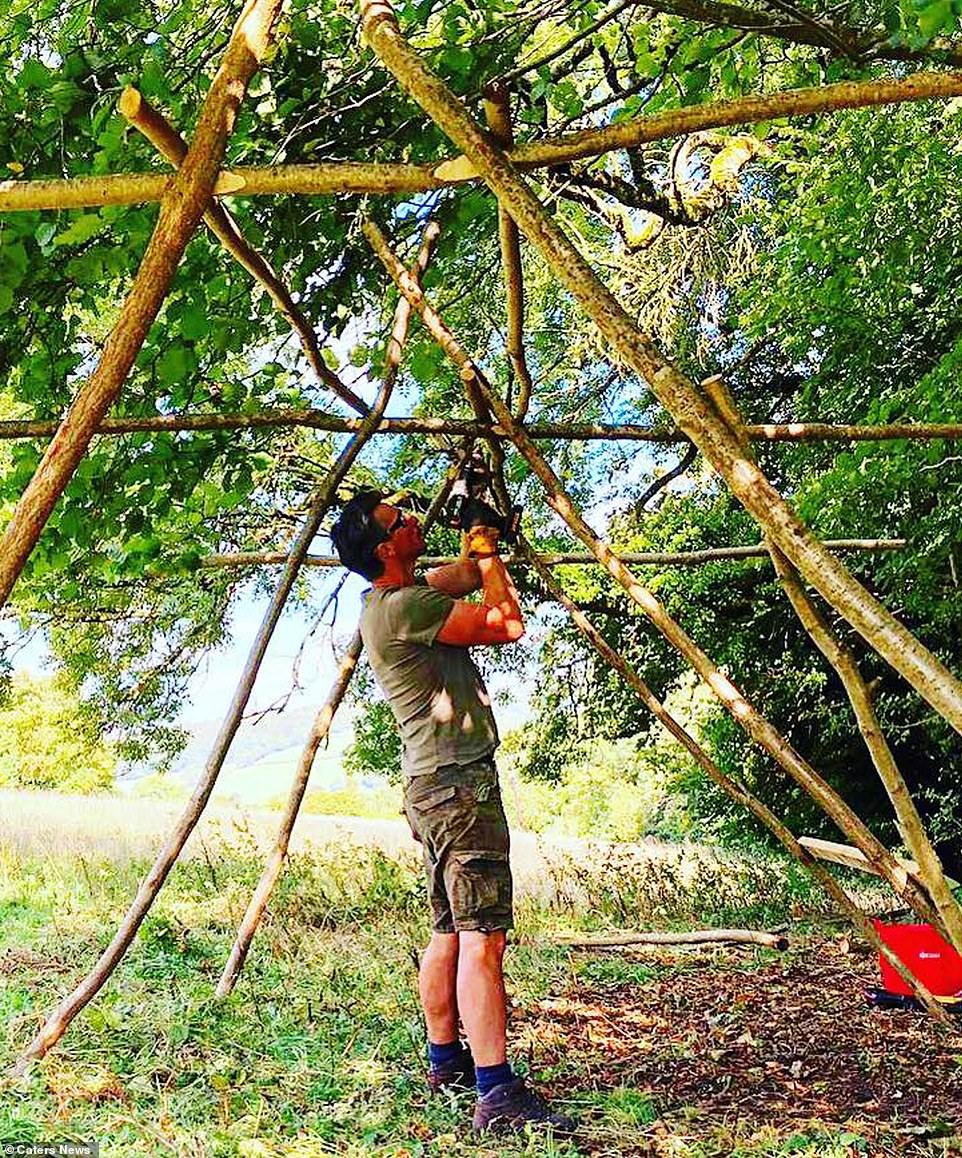 Mr Jackson, who previously commuted into London for his job as a corporate sales account manager, builds a structure out of wood on the land 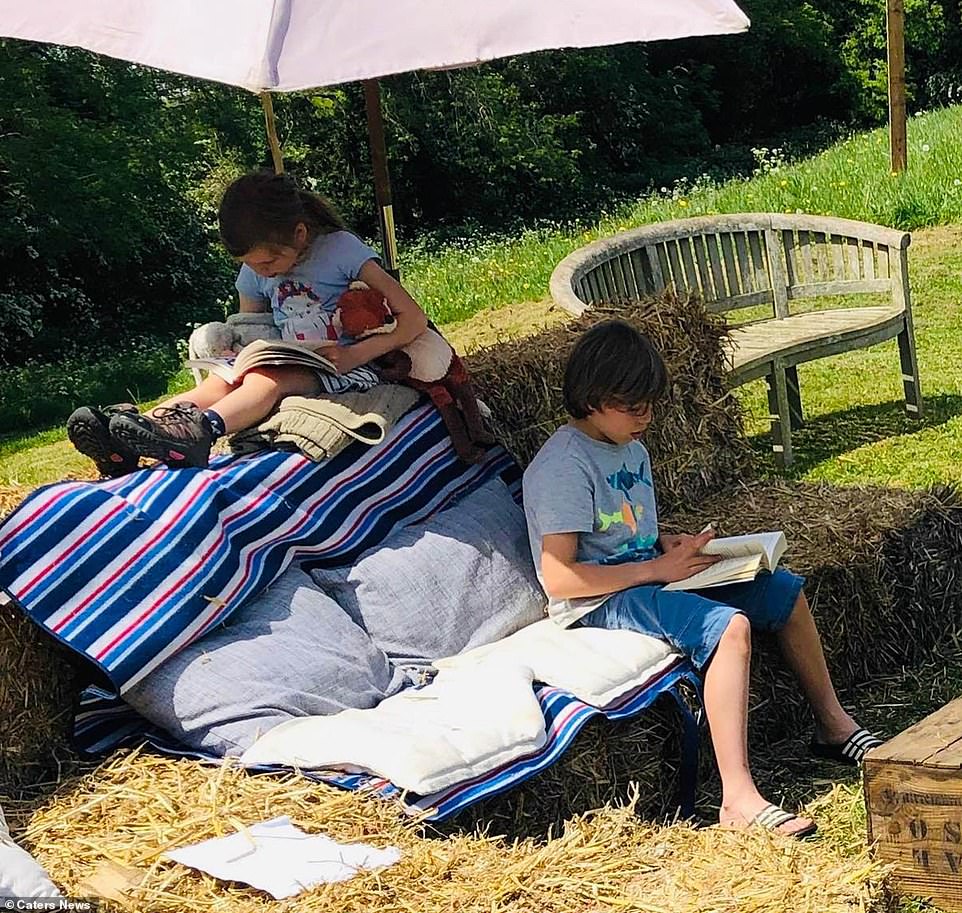 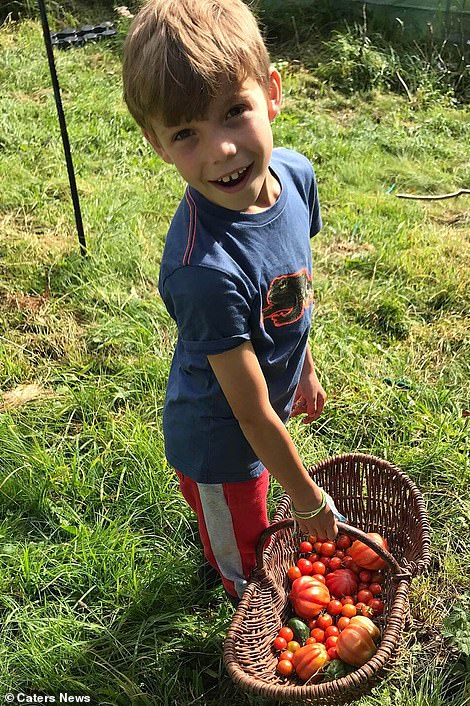 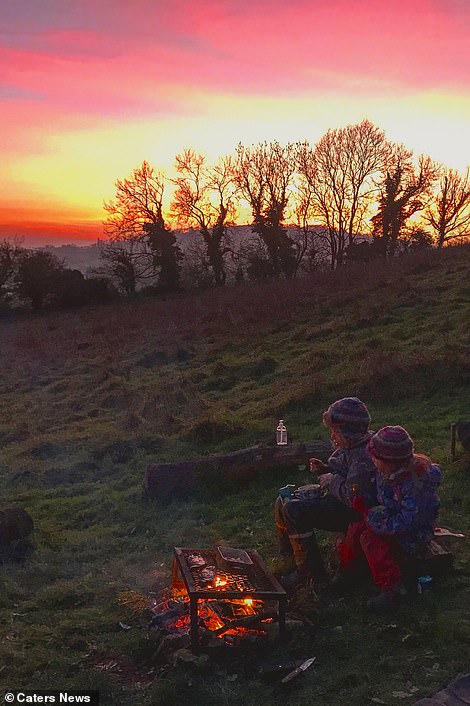 Gilly smiles as he shows off his haul of freshly-picked tomatoes (left), and the siblings sit in front of a fire in the stunning countryside (right)

‘There are no coffees on the way into work and we have saved so much money on cinema visits and meals out. It really is the simple life but we love it and so do the kids.

‘We had to sell our house and we rent a house now but to be honest we are enjoying having no mortgage. We used the money to buy land and that’s how we hope to make some money back in the future.’

He added: ‘When friends come to visit they realise we haven’t completely lost the plot and we are actually living the dream. I’m just glad we were brave enough to do it when we did and didn’t leave it too late.’