Decreased iron levels in seawater due to climate change is making mussels loosen their grip on the rocks on which they live, a study has shown.

The shelled molluscs attach themselves to surfaces — like rocks or ropes — using a sticky ‘plaque’ and hair-like threads that link the plaque to the mollusc’s inner tissues.

However, mussels need enough iron to make this adhesive — but changing ocean acidity is reducing the amount of useful iron in the water for the creatures to use.

As oceans become more acidic, iron dissolves and is less available to filter feeders — like mussels — that strain solid iron particles out of the seawater.

Researchers the US have shown that mussels form weaker attachments to surfaces in iron-deficient seawater — risking coming free and becoming damaged.

Decreased iron levels in seawater due to climate change is making mussels, pictured, loosen their grip on the rocks on which they live, a study has shown

‘Learning how organisms create biomaterials from the elements around them is a continually developing story.’

‘Gaining this knowledge arrives within the context of a changing climate as the oceans experience alterations to acidity, temperature and oxygen levels.’

‘The subsequent uptake of nutrients required to forge structural components may then become more challenging for biology.’

In their study, Dr Wilker and colleagues kept mussels in different tanks of artificial seawater that contained low, normal and high iron levels.

Each mussel was grown in one of the tanks for three days, during which the creatures formed attached to aluminium plates.

At the end of this period, the researchers cut off the connective threads near the shell and pulled upward on them to measure the force required to remove each mussel’s plaque from the plate it had attached to.

The team found that the plaque’s stickiness generally increased as the concentration of iron in the water increased, and vice versa — except at the highest iron level, when it became slightly less sticky. 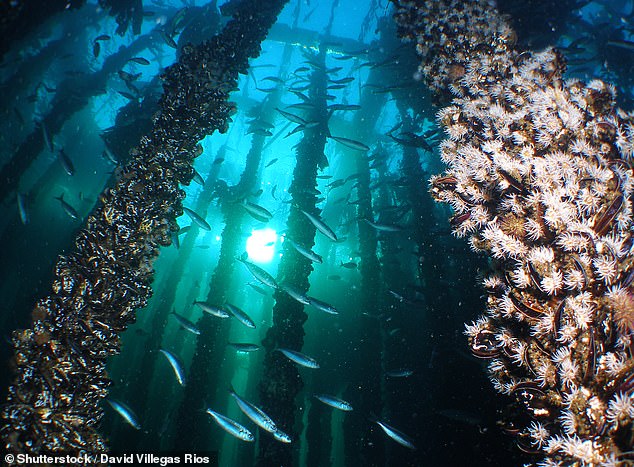 The shelled molluscs attach themselves to surfaces — like rocks or ropes, pictured — using a sticky ‘plaque’ and hair-like threads that link the plaque to the mollusc’s inner tissues

The team also observed that the plaques became smaller, darker and more porous as the iron concentration increased.

This study is the first to examine how changing iron levels affect the performance of a biological material in a whole animal, the researchers said.

The full findings of the study were published in the journal Environmental Science and Technology.