Holiday giant Tui is to close 166 high street stores in the UK and the Republic of Ireland, the UK’s biggest tour operator has announced.

The decision was made following changes in customer behaviour as a result of the pandemic, the firm said in a statement, with the Anglo-German company calling COVID-19 the ‘greatest crisis’ the airline industry has ever faced.

It announced it would cut 8,000 roles worldwide after posting losses of £747million in 2020 compared to £255million in the same period last year.

Tui said that it would seek to move 70 per cent of the 900 staff affected by the closures to homeworking sales and services roles, and it would aim to relocate other employees in the remaining high street stores.

In statement released today, Tui’s UK and Ireland managing director Andrew Flintham said: ‘We want to be in the best position to provide excellent customer service, whether it’s in a high street store, over the telephone or online, and will continue to put the customer at the heart of what we do.

Holiday giant Tui is to close 166 high street stores in the UK and the Republic of Ireland , the UK’s biggest tour operator has announced 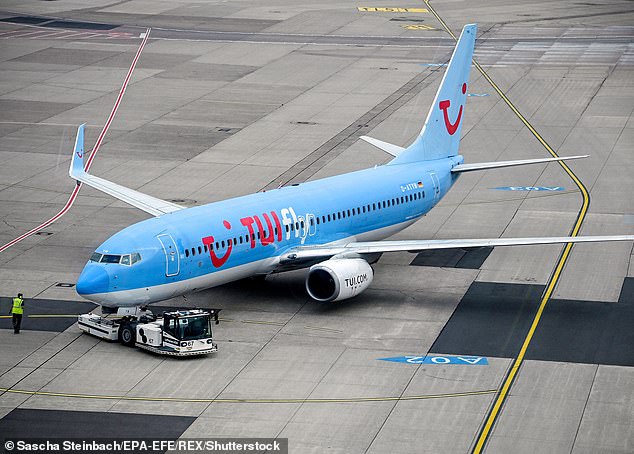 The decision was made following changes in customer behaviour as a result of the pandemic, the firm said in a statement, with the Anglo-German company calling COVID-19 the ‘greatest crisis’ the airline and travel industry has ever faced

‘It is therefore imperative that we make these difficult cost decisions, look after our colleagues during such unprecedented uncertainty and also offer a modern customer service.

Flybe: Europe’s largest regional airline collapsed on March 5 after months on the brink, triggering 2,400 job losses and left around 15,000 passengers stranded across the UK and Europe.

British Airways: The International Airlines Group, which also includes Iberia and Aer Lingus, said on March 16 that there would be a 75 per cent reduction in passenger capacity for two months, with boss Willie Walsh admitting there was ‘no guarantee that many European airlines would survive’. The company has since said it wants to reduce the number of staff by 12,000.

easyJet: The airline with 9,000 UK-based staff including 4,000 cabin crew grounded its entire fleet of 344 planes on March 30. The Luton-based carrier said parking all of its planes ‘removes significant cost’ as the aviation industry struggles to cope with a collapse in demand.

Loganair: The Scottish regional airline said on March 30 that it expects to ask the Government for a bailout to cope with the impact of the pandemic.

Jet2: The budget holiday airline has suspended all of its flights departing from Britain until April 30. A number of Jet2 flights turned around mid-air last month while travelling to Spain when a lockdown was announced in the country.

Virgin Atlantic: The airline said on March 16 that it would have reduced its lights by 80 per cent by March 26, and this will go up to 85 per cent by April. It has also urged the Government to offer carriers emergency credit facilities worth up to £7.5billion.

Ryanair: More than 90 per cent of the Irish-based airline’s planes are now grounded, with the rest of the aircraft providing repatriation and rescue flights. Ryanair CEO Michael O’Leary said his airline would be forced to shed 3,000 jobs while seeking pay reductions of up to 20 per cent by those who remain.

‘Customer behaviours have already changed in recent years, with 70 per cent of all Tui UK bookings taking place online.

‘We believe COVID-19 has only accelerated this change in purchasing habits, with people looking to buy online or wishing to speak with travel experts from the comfort of their own home.

‘We have world-class travel advisers at Tui, so we hope many of them will become homeworkers and continue to offer the personalised service we know our customers value.’

Tui has already closed down 70 travel agent stores in France, with job losses of nearly 600 in the European nation.

It’s hoped the restructure ‘should then enable Tui France to break even from 2021 onwards’.

Tui said that going forward they will focus on the ‘high-margin business with a few core brands’ as it plans to cut costs globally by 30 per cent.

In a statement Tui said: ‘The project foresees a reduction of 583 jobs, in the scenario of the closing of all own retail shops, which is approximately 60 per cent of the current Tui France staff base.’

‘The changes are now being discussed with the relevant committees and employee representatives in France.’

It added: ‘Tui France was already loss-making before the pandemic. In a structurally challenging market with a high cost structure and low margins, the company had been making losses in recent years.

‘In the wake of the corona pandemic, the situation for Tui France has again deteriorated significantly. A far-reaching package of measures is now needed to create a perspective for the company within the group.’

Tui previously said: ‘We are targeting to permanently reduce our overhead cost base by 30 per cent across the entire group. This will have an impact on potentially 8,000 roles globally that will either not be recruited or reduced.’

Fritz Joussen, chief executive of the firm, said the company should ’emerge from the crisis stronger’.

He added: ‘It will be a different Tui and it will find a different market environment than before the pandemic.

‘This will require cuts: in investments, in costs, in our size and our presence around the world.

‘We must be leaner than before, more efficient, faster and more digital.’

The company’s report said: ‘The tourism industry has weathered a number of macroeconomic shocks throughout the most recent decades, however the Covid-19 pandemic is unquestionably the greatest crisis the industry and Tui has ever faced.’

It added that losses also came as a result of the grounding of the Boeing 737 Max aircraft after two crashes with other airlines.

The global airline industry has been hammered by the impact of coronavirus, with the huge slump in demand for international travel leading to thousands of planes being grounded and staff numbers slashed. 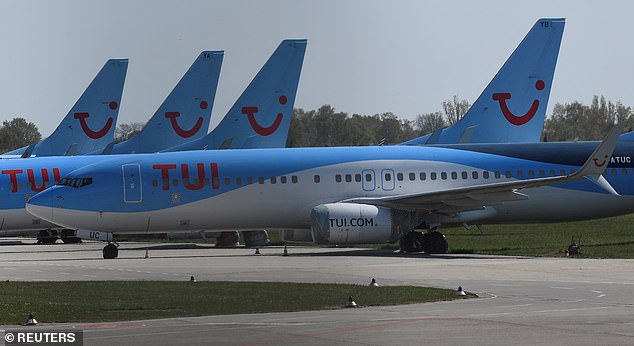 The company that owns BA alongside Iberia and Aer Lingus said on March 16 that there would be a 75 per cent reduction in passenger capacity for two months.

Its boss, Willie Walsh, admitted there was ‘no guarantee that many European airlines would survive’.

The company has since said it wants to reduce the number of staff by 12,000.

Easyjet grounded its entire fleet of 344 planes on March 30, while Ryanair is only operating at 10 percent capacity.

Countless holidays have been cancelled since the Foreign Office advised against all but essential travel in March.

With no end date in sight, and the Government now looking to enforce a 14-day quarantine period for travellers returning to Britain by air, it is highly likely that many families will be unable to go abroad for the foreseeable future.

Despite this, scores of readers today told Money Mail they are still being asked to pay more money for trips they are certain they won’t be able to take.

At least 66,102 jobs are at risk across the UK amid the ongoing coronavirus crisis