Europe is facing a summer heatwave with river beds drying up in France and 14 cities on red alert in Italy while Germany suffers a month-long drought.

Paris is set to reach 104F (40C) temperatures in the shade after several French cities hit record highs on Thursday ahead of a heavy holiday travel weekend.

A dramatic wildfire in the French Atlantic resort of Anglet destroyed nearly a dozen homes and forced around 100 people to evacuate before it was finally brought under control today, while rivers ran dry in eastern France.

Spain is also roasting in the heatwave caused by hot air coming in from Africa, just as Madrid tightens its rules on mask-wearing to combat a second wave of coronavirus cases.

Large swathes of Germany are also under a heat warning this weekend after the country saw just 65 per cent of its expected rainfall over the month of July.

NETHERLANDS: A crowd of beachgoers enjoy the summer weather at the seaside near the Brouwersdam in Holland, where temperatures were expected to reach nearly 90F (32C) today 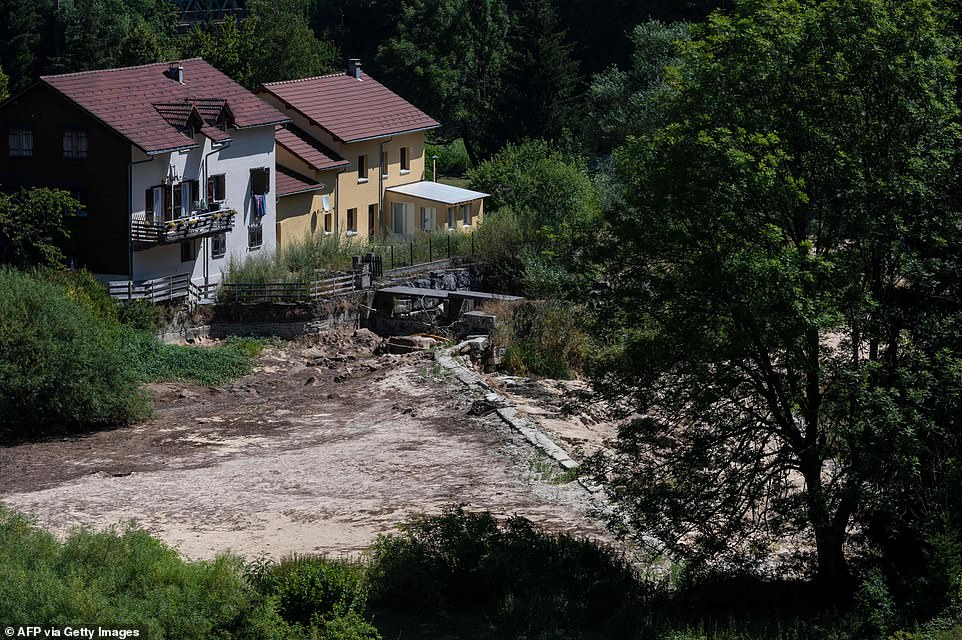 FRANCE: Houses next to the dried-up Doubs river in Maisons-du-Bois-Lievremont in eastern France today as numerous French cities saw record temperatures during a summer heatwave 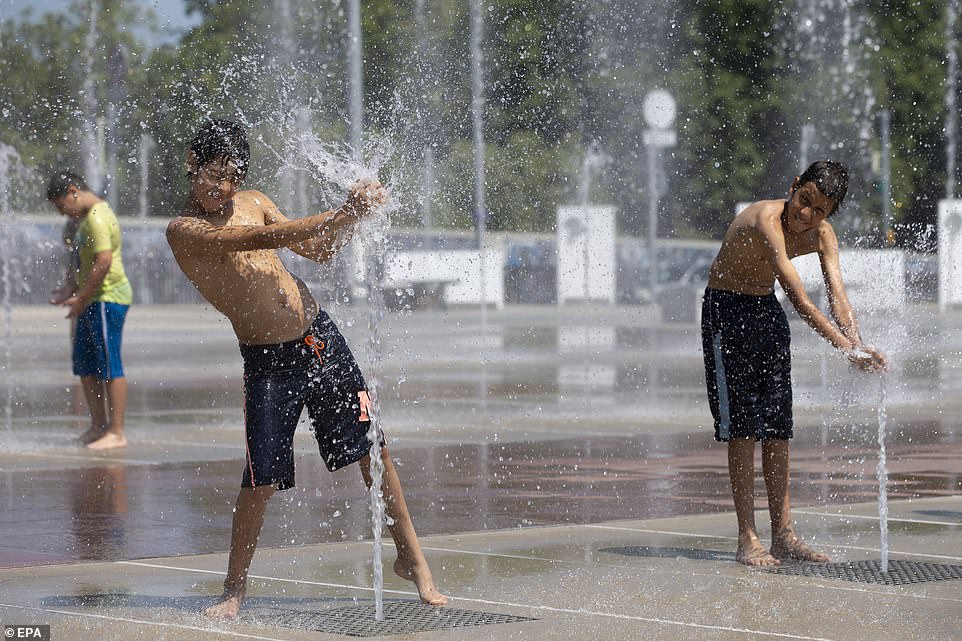 SWITZERLAND: Two children, Mohamed and Hatim, cool off with water jets in the fountain at the Place des Nations during a hot summer day in Geneva on Friday 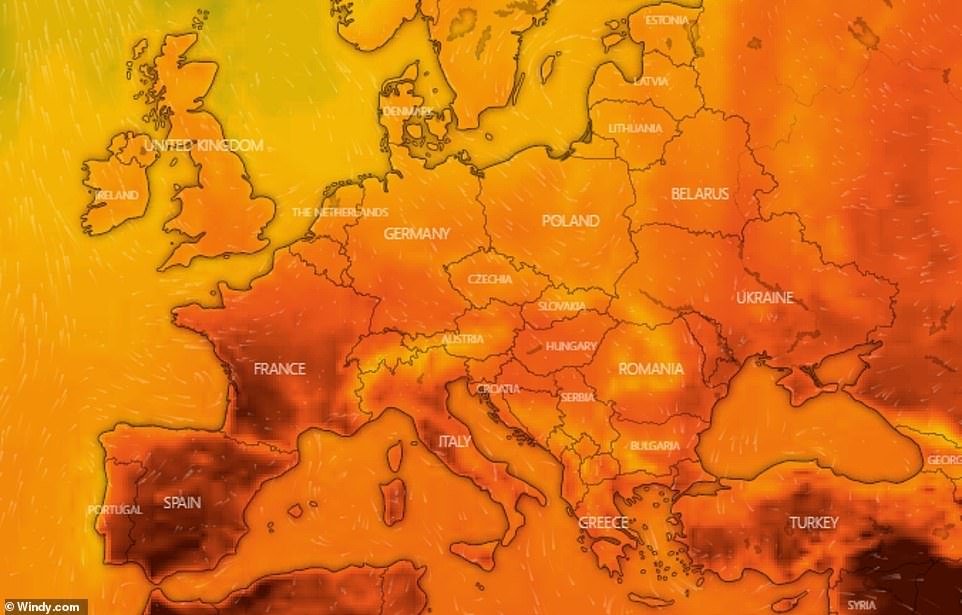 The website Severe Weather Europe says today is expected to be the hottest day of the year so far in Western Europe, warning of ‘extreme heat’.

Authorities in Paris imposed driving restrictions to limit ozone pollution as tens of thousands of people prepared to flee to cooler climes, according to the nation’s traffic surveillance agency.

‘The heatwave requires the state to be vigilant, and everyone to be cautious,’ Prime Minister Jean Castex said while visiting firefighters in Bourg-en-Bresse, southeast France.

The blaze in Anglet erupted late Thursday in the Chiberta forest park in southwestern France, where the beaches just north of Biarritz draw surfers from around the world.

It was the latest of several fires that erupted in southern and central France this week, kicking off the annual fire season which officials warn could be worsened by the drought and dry heat.

‘Ninety per cent of these fires are caused by humans,’ Environment Minister Barbara Pompili told BFM television, asking people to use ‘common sense.’

Officials also urged families and neighbours to check in on the elderly, and retirement homes are on high alert since air-conditioners are being discouraged over fears they could foster coronavirus contagions. 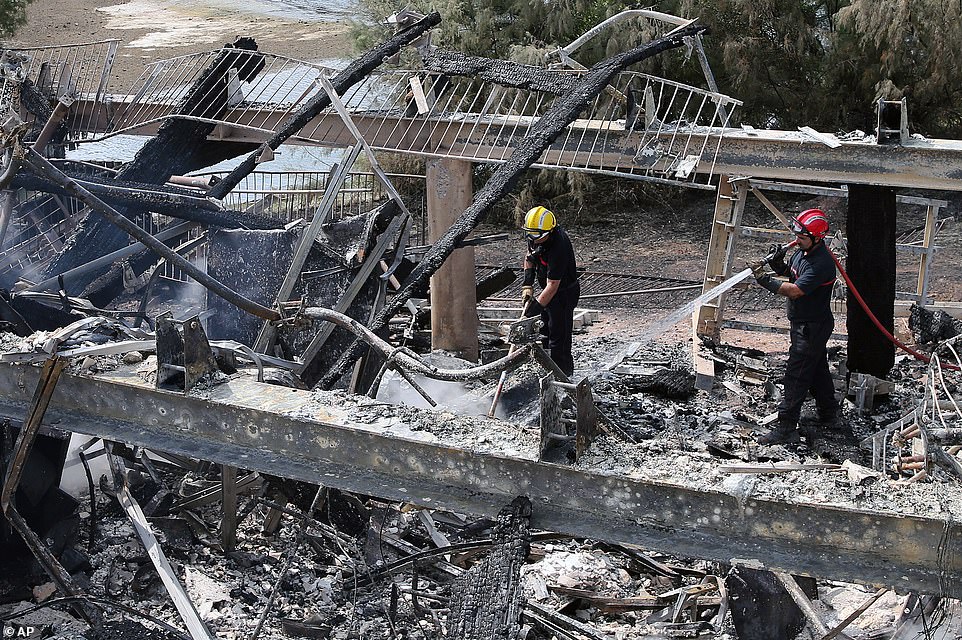 FRANCE: Firefighters work at a building on an ornithological reserve in Izadia, near the Chiberta forest in Anglet, where a wildfire burned nearly 250 acres of forest early today 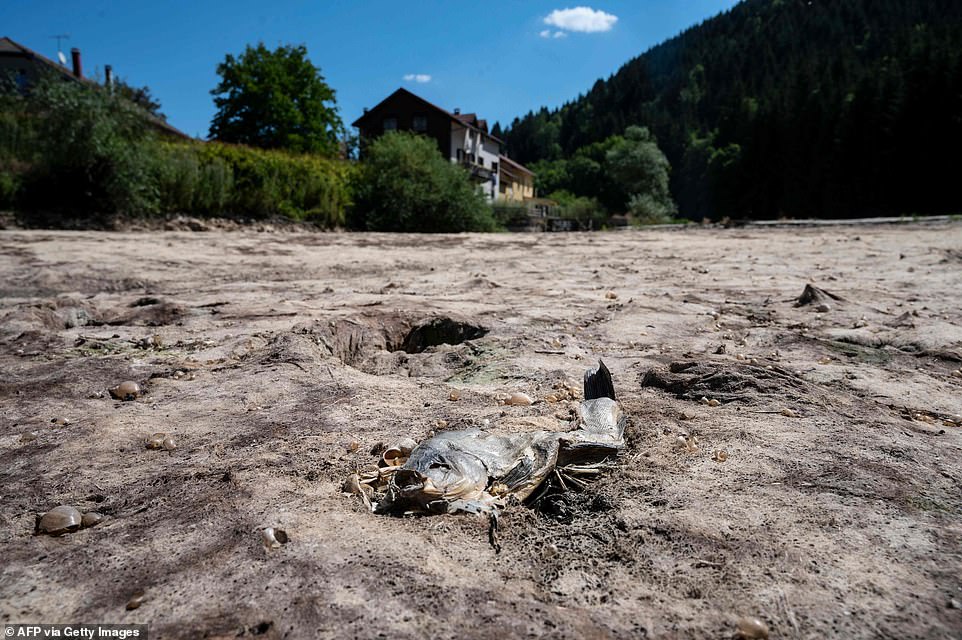 FRANCE: A dead fish in the Doubs river in eastern France which has dried up because of the heatwave hitting western Europe 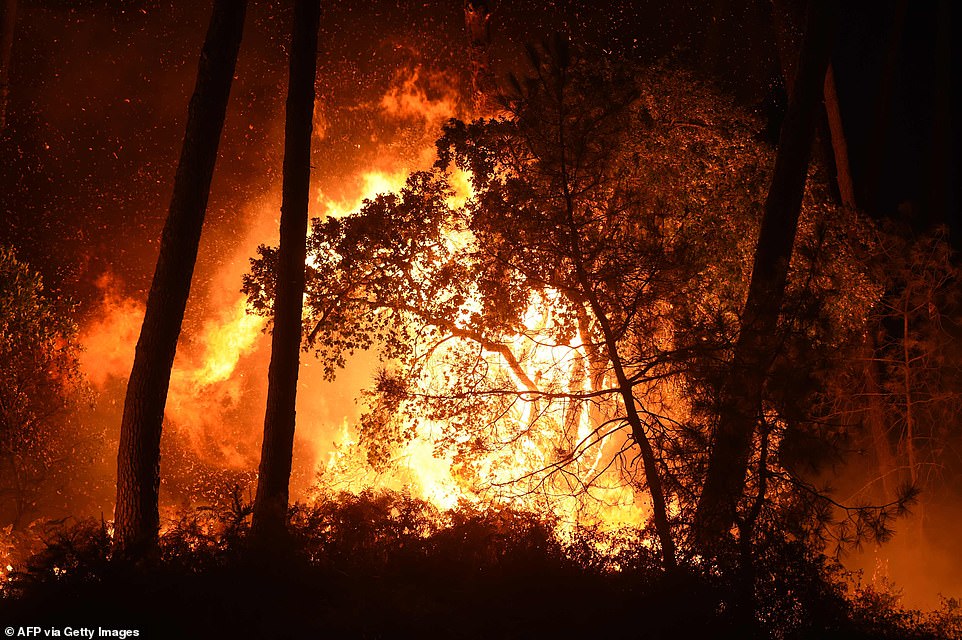 FRANCE: A fire in the Chiberta forest in Anglet destroyed nearly a dozen homes and forced around 100 people to evacuate before it was finally brought under control today 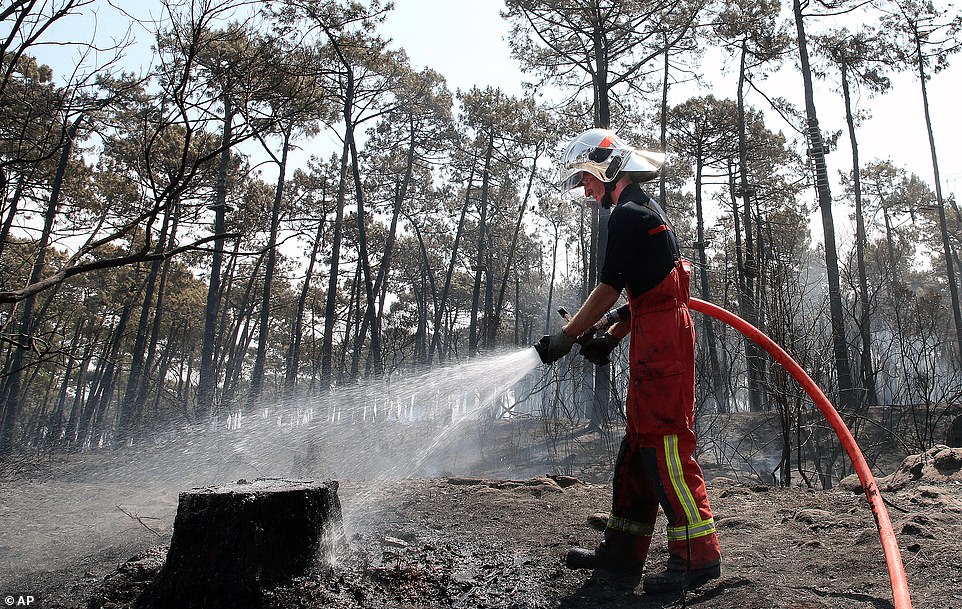 FRANCE: A firefighter works in the Chiberta forest in Anglet where several houses were destroyed by the wildfires 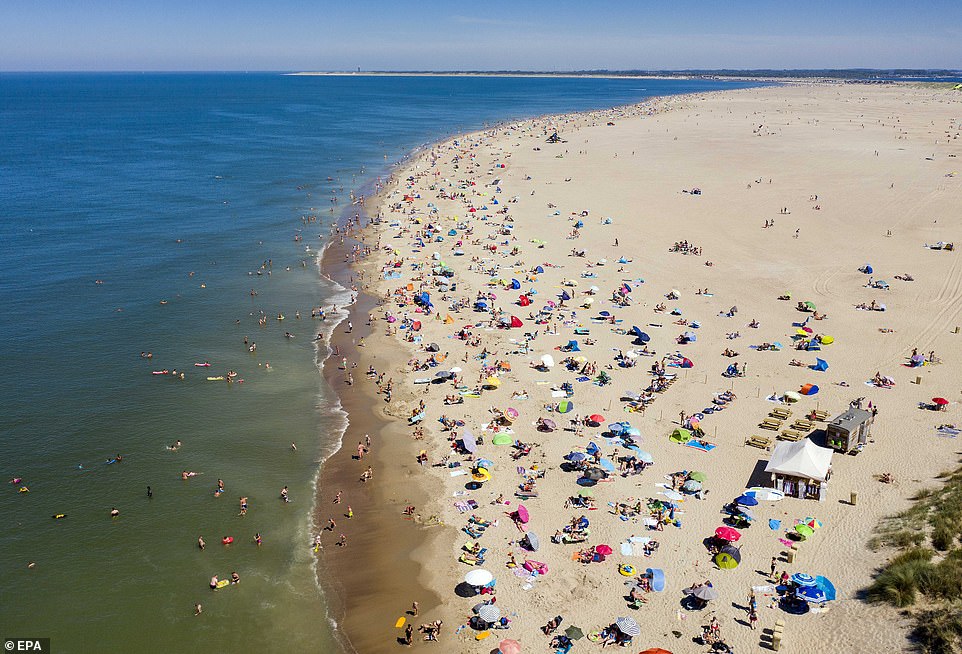 NETHERLANDS: An aerial view of summer crowds on the beach near the Brouwersdam in the Netherlands on Friday 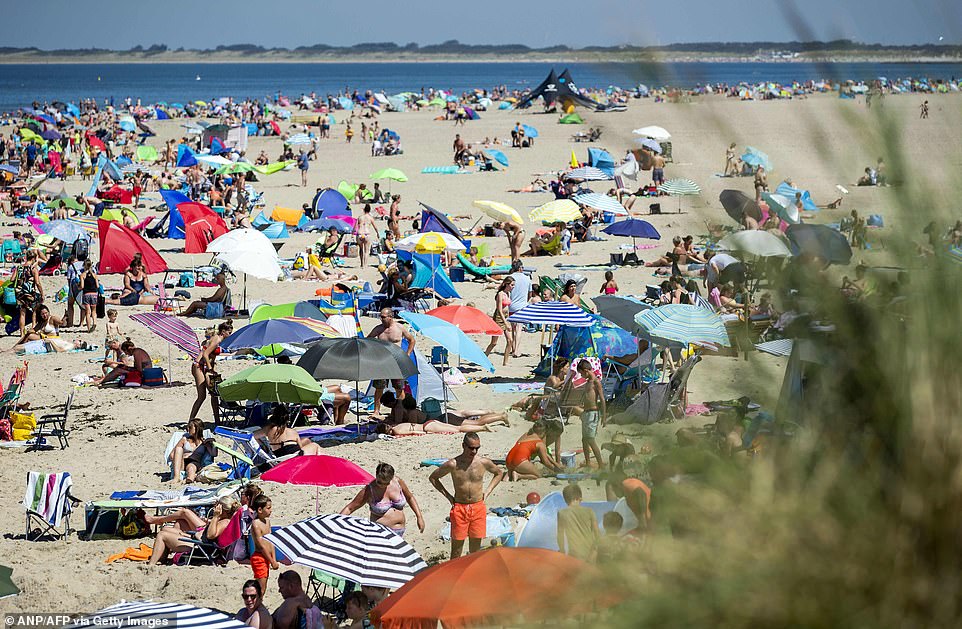 NETHERLANDS: Beachgoers enjoy the sunshine as they sunbathe and play in the sea on a beach in Ouddorp today 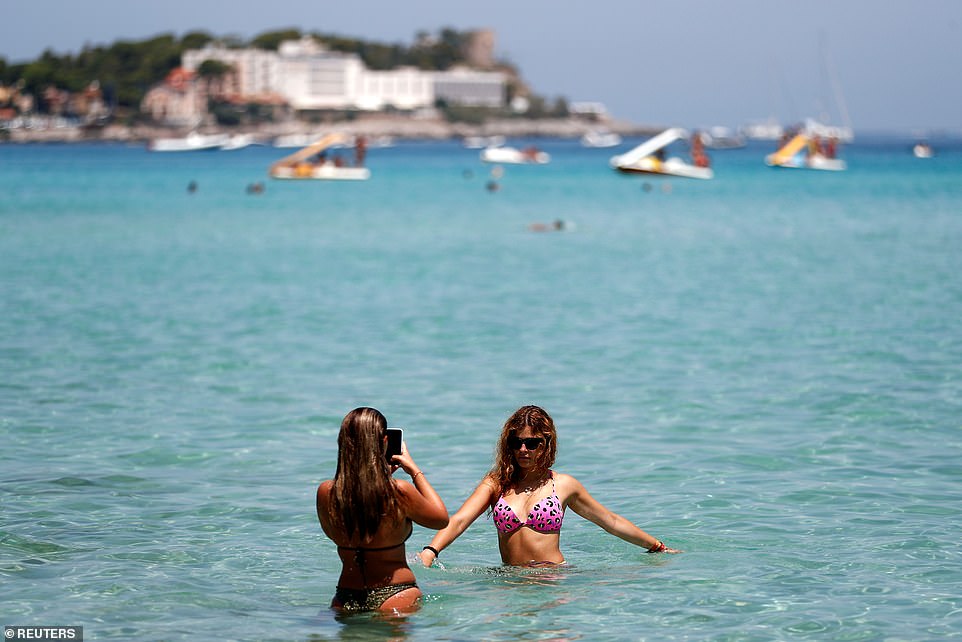 ITALY: A woman takes her friend’s picture as the paddle in the water at Mondello beach in Palermo today amid the heatwave

An increase in Covid-19 cases prompted French officials to tighten face mask requirements in several cities this week, with many making them mandatory outdoors despite the heat.

Last year was France’s hottest on record, and Meteo France has warned that global warming could double the number of heatwaves by 2050.

Meanwhile in Spain, a heatwave hit on Thursday just as Madrid made mask-wearing compulsory to prevent a surge in coronavirus infections.

‘Your breath gets very warm – your glasses, there are lots of problems,’ said Madrid resident Ana Gonzalez. ‘But you put it all aside when you think that it’s protection and there’s no choice about wearing it.

‘You forget about the face mask and that’s it. It’s the only way. At least, that’s what I do.’

Spain’s meteorological agency said the hot air was coming from Africa and would last until Saturday, as holidays are scaled back in some parts of the country because of the virus pandemic. 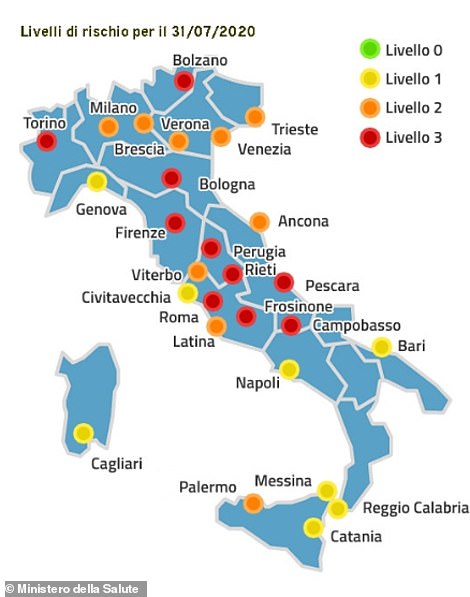 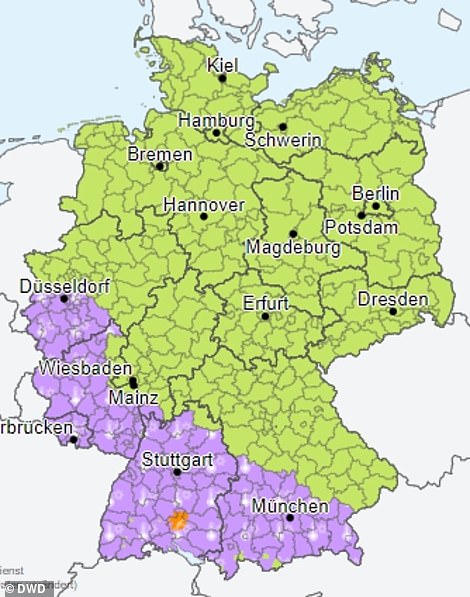 In Italy (left), 10 cities (marked in red) are at the highest alert level today while 14 are in the same category for Saturday, while in Germany (right) a large swathe of the country close to the French border (in purple) has been put on a heat warning 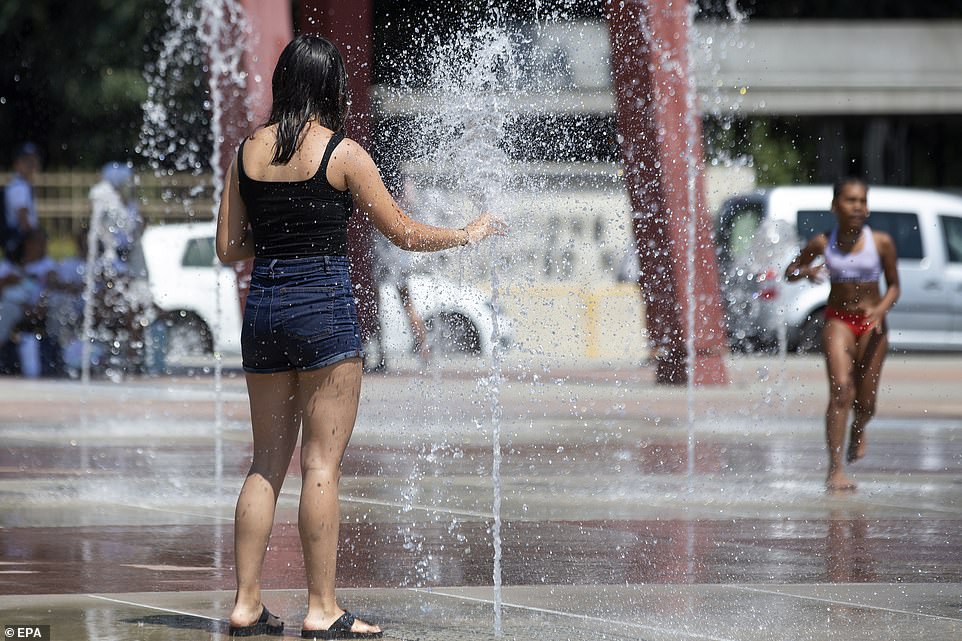 SWITZERLAND: A woman cools off in the Place des Nations fountain in Geneva today as weather agency MeteoSwiss issued a heatwave alert for parts of the country 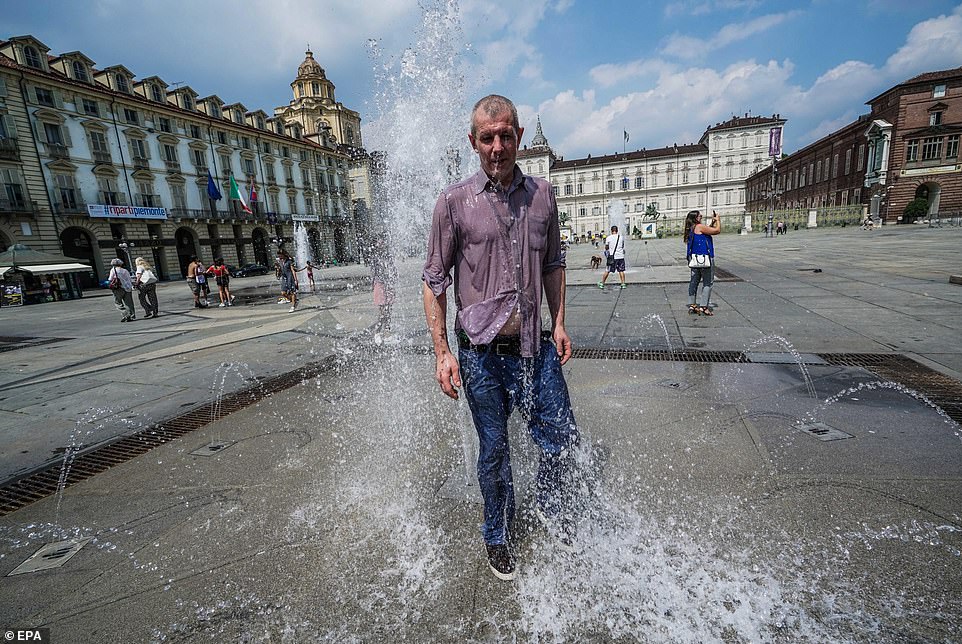 ITALY: A man cools off in a fountain during a hot day in Turin, one of the cities which has been put on the highest alert level

In Rome, where the temperature hit 100F (38C) on Thursday and was set to go to 102F (39C) on Friday, authorities told the elderly and children not to go out in the hottest part of the day.

Italy’s health ministry has put 10 cities on a red-alert warning for Friday and 14 cities for Saturday, including Rome, Turin and Bologna.

On Cyprus, the heatwave hit earlier this week, with temperatures already up in the 100s Fahrenheit since Monday.

Germany’s weather service has also issued a heat warning for much of the south and west of the country near the French border where temperatures are expected to reach 95F (35C) at the weekend.

Officials say July saw only 65 per cent of the expected rainfall in Germany, with some areas in the south-west seeing only 10 litres of rain per square metre compared to the national level of 50.