Drunken passenger Adam Lennon caused so much havoc on a commercial flight the captain decided to land at Bristol Airport.

Lennon was flying with a friend by Ryanair from Murcia in Spain to Dublin on New Year’s Eve, 2019, Bristol Crown Court heard yesterday.

But after necking back vodka he and his friend started play-fighting and, when spoken to, Lennon threatened to punch cabin crew staff before telling one to ‘f*** off’.

Adam Lennon, 22, from Dublin, Ireland, was jailed for four months after his behaviour on a Ryanair flight back home meant the captain had to land at Bristol, costing almost £6,000

Because Lennon continued to be disruptive the aircraft’s captain decided to divert to Bristol, where police were waiting in the wings.

The diversion landed Ryanair with costs of almost £6,000. Lennon, 22, whose address was given as Baldoyle in Dublin, pleaded guilty to being drunk on an aircraft.

The court heard he had not cooperated with his legal team, had absented himself, and was thought to be in either Ireland or Italy.

Judge Michael Longman concluded he was legally able to deal with and jail Lennon in his absence, and jailed him for four months.

The judge said: ‘One can imagine his behaviour was alarming, in a closed space and at altitude, and such that it caused annoyance and disruption to a number of passengers.’

He said Ryanair should be notified of the outcome of the case, and they could decide if they want to prohibit Lennon from flying with them.

Mark Worsley prosecuting, said all was well at the start of the flight, until staff noticed Lennon and his friend drinking their own alcohol, drunk and play-fighting.

The court heard when staff spoke to them Lennon threatened to punch them, and the two men were separated.

Lennon went on to tell a cabin crew member to ‘f*** off’, Mr Worsley said, and the pilot put out a message reminding passengers not to drink their own alcohol on board and comply with cabin crew.

Due to continuing disruption the captain decided to divert the aircraft to Bristol, where police, airport security, and fire services were waiting. 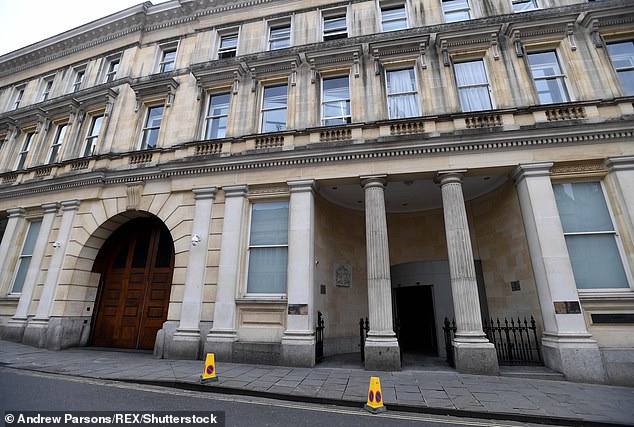 Mr Worsley said: ‘Police went on the plane and Mr Lennon presented his hands for handcuffs immediately. He was taken off the plane.

‘He was clearly drunk and slurring and had a half empty bottle of vodka between his knees.’

Lennon was interviewed the next day, said his companion bought the vodka and denied threatening to punch cabin crew.

Mr Worsley told the court: ‘He said his behaviour was unacceptable. It is clear others on board were worried about what happened.’

He added that authority states persons convicted of being drunk on an aircraft must expect a custodial sentence.