Muslims around the world continue to celebrate Eid al-Adha as they slaughter livestock amid scaled back festivities because of the coronavirus pandemic.

Today marks the second of the four-day Feast of the Sacrifice, which coincides with the last days of the Hajj in Saudi Arabia.

Eid al-Adha commemorates Muslims’ belief that prophet Abraham was willing to sacrifice his son as an act of obedience to God, before God replaced his son with a ram to be sacrificed instead.

Many Muslims who can afford it sacrifice cattle as part of the celebrations, as well as camels, goats, sheep or rams.

Muslim devotees slaughter cattle during the Eid al-Adha, the feast of sacrifice, in Lahore 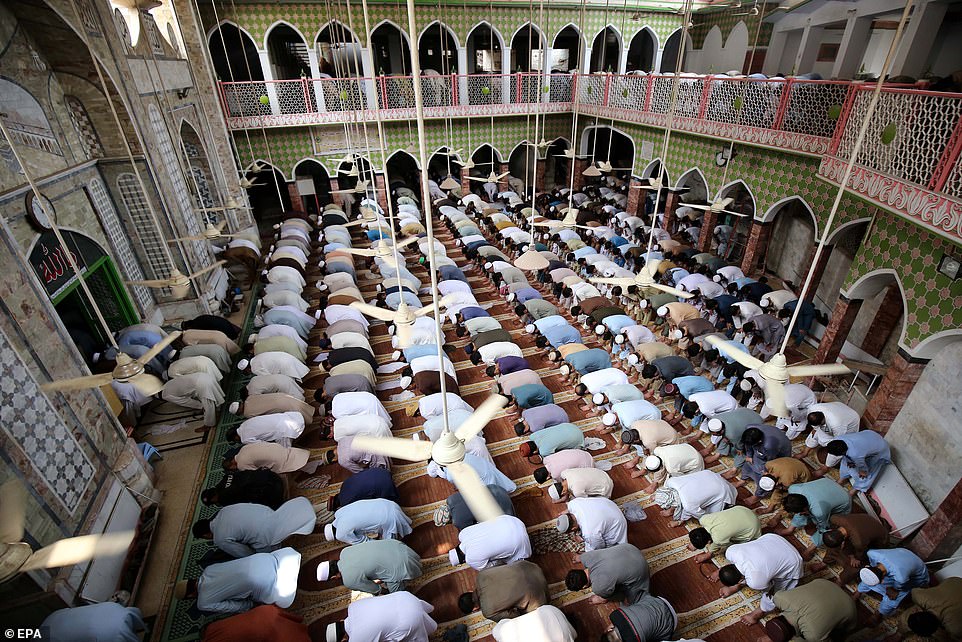 Muslims attend prayers at a mosque in Peshawar in Pakistan. Eid al-Adha is the holiest of the two Muslims holidays celebrated each year and it marks the yearly Muslim pilgrimage Hajj to visit Mecca 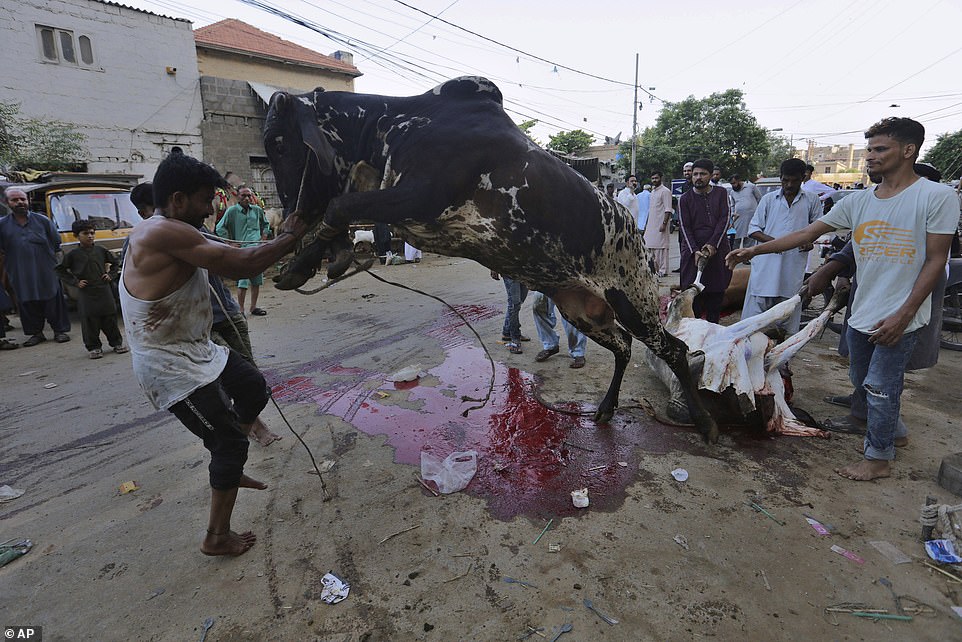 People struggle to control a bull for slaughtering for Eid al-Adha in Karachi, Pakistan 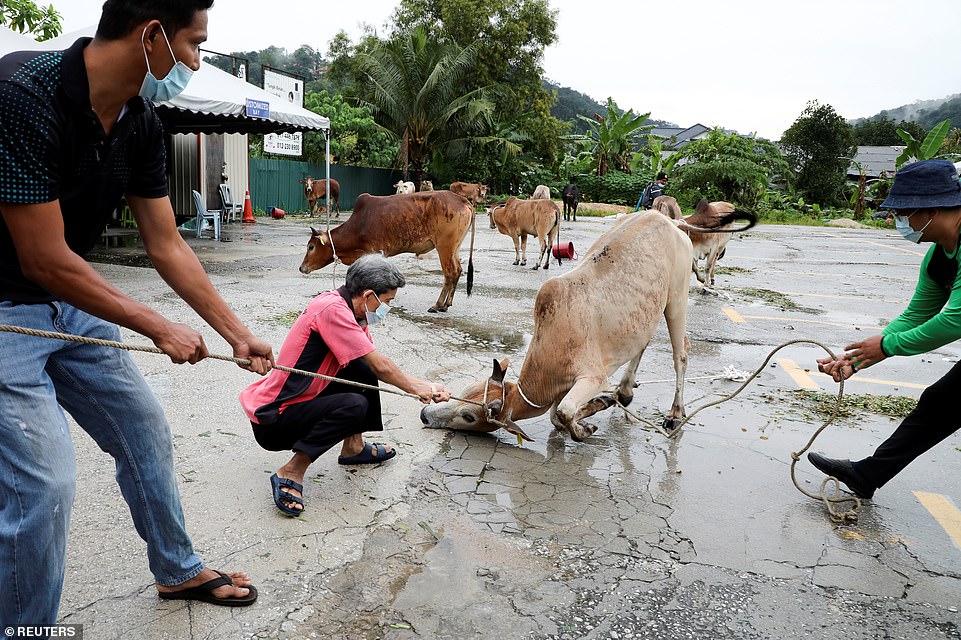 The meat is distributed to the poor to commemorate the prophet Abraham’s willingness to sacrifice his son, but the economic crisis means that many cannot afford livestock.

Rule of the sacrifice include that the animal can only be slaughtered after the Eid prayer, and that is has to be an adult at the time it is slaughtered.

Water should also be offered to the animal before the time of the slaughter, and every animal that is sacrificed must be completely healthy without any physical defects.

The coronavirus has cast a shadow over this Eid, with fears of another spike in infections prompting authorities to warn people to minimise movement, avoid cattle markets and refrain from public gatherings to witness the slaughter of sacrificial animals.

Eid al-Fitr, marked in May, was followed by a spike in Covid-19 infections with new daily cases. 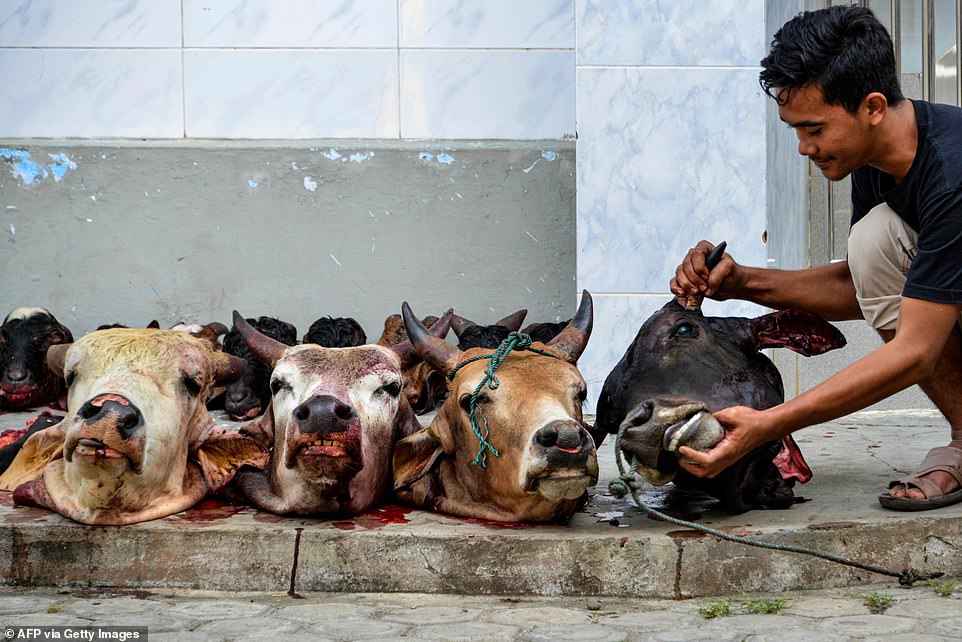 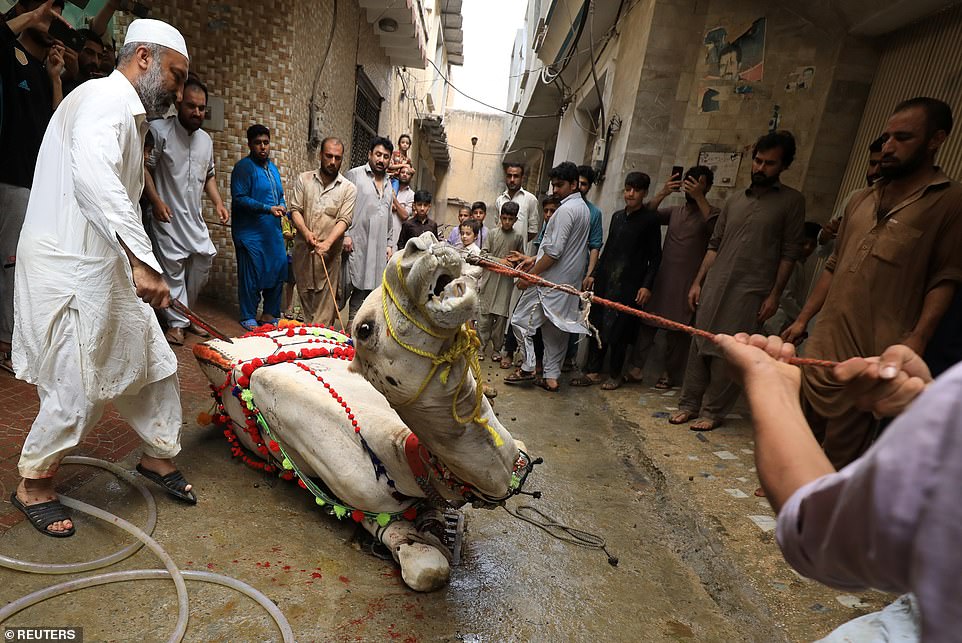 Mosques have imposed strict hygiene rules to prevent the virus from spreading at Eid prayers, while families in many countries are unable to gather as they normally would.

Kosovo and the United Arab Emirates have also closed mosques to limit the spread of the virus.

In Lebanon, Muslim worshippers prayed in mosques under tight security, despite a partial lockdown imposed Thursday that will continue until August 10.

The pandemic has pushed millions of people around the world closer to the brink of poverty, making it harder for many to fulfill the religious tradition of purchasing livestock.

In Somalia, the price of meat has slightly increased. Abdishakur Dahir, a civil servant in Mogadishu, said that for the first time he won’t be able to afford goat for Eid because of the impact of the virus on work.

‘I could hardly buy food for my family,’ Dahir said. ‘We are just surviving for now. Life is getting tougher by the day.’ 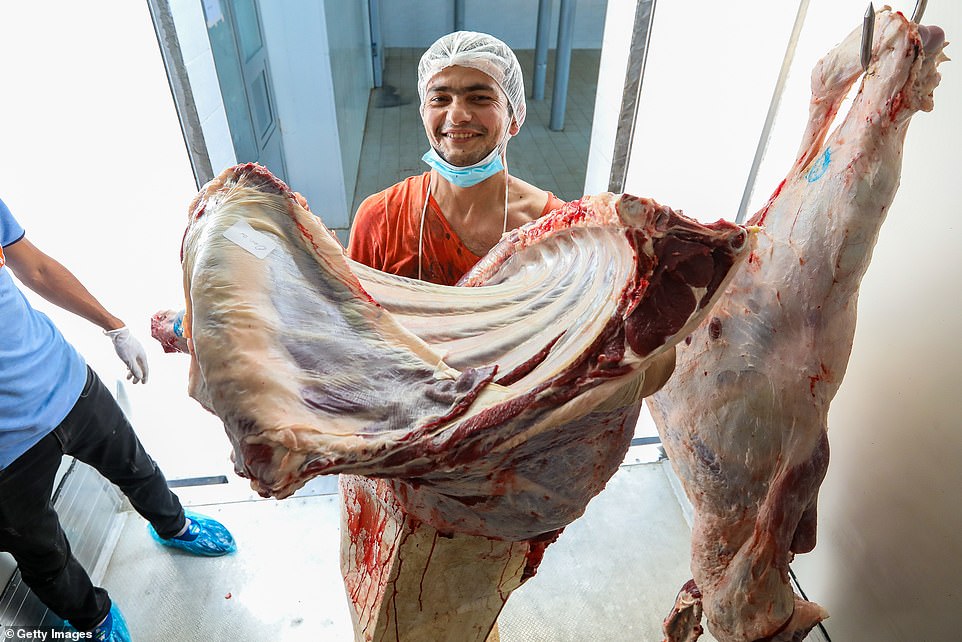 Butchers load a truck with meat from livestock during Eid Al-Adha on in Baku, Azerbaijan 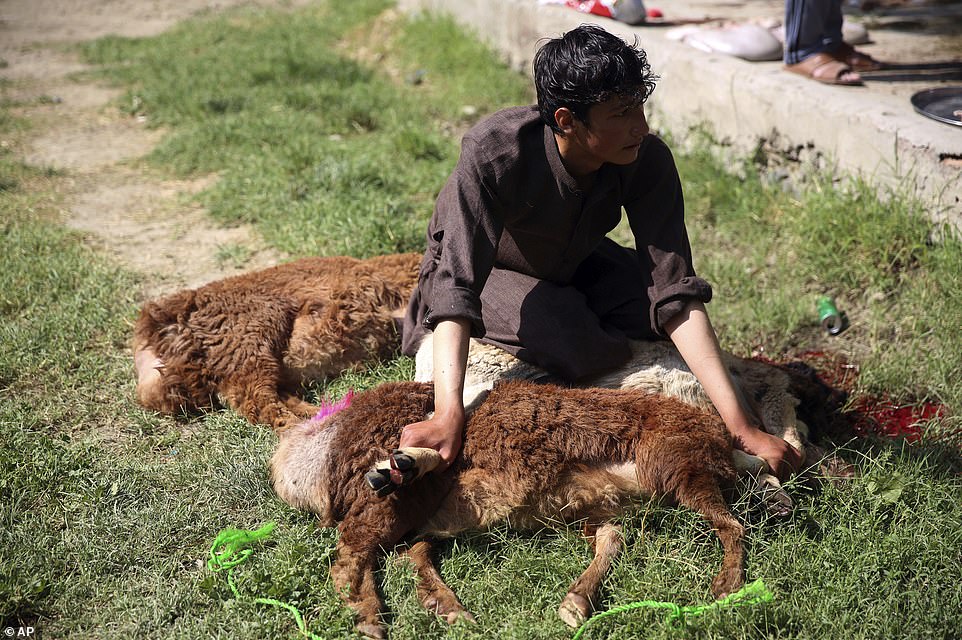 A man helps slaughter sheep for Eid al-Adha, which typically sees meat distributed to the poor, in Kabul, Afghanistan 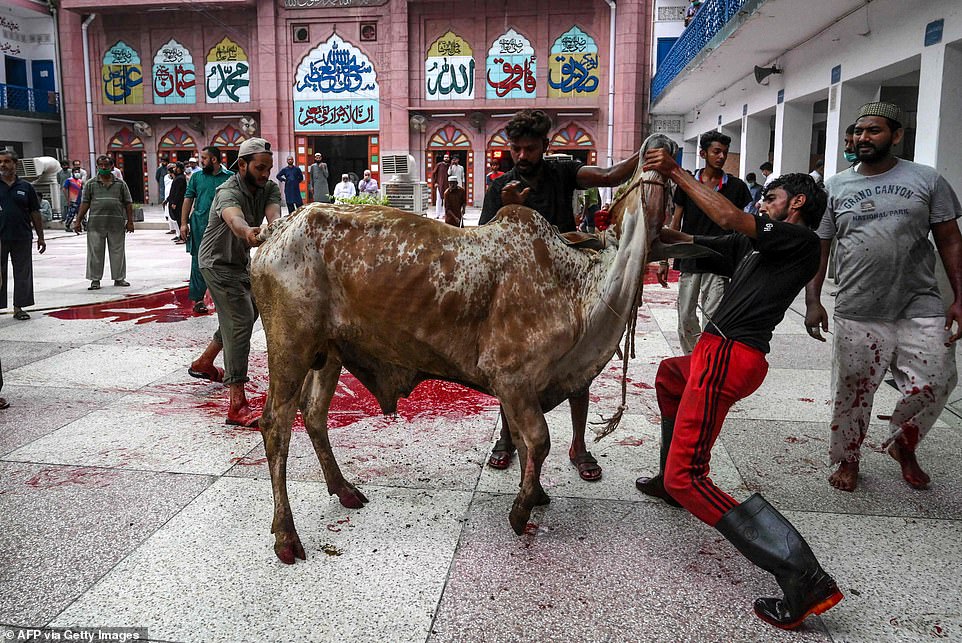 Pictured above, devotees prepare to sacrifice a camel in Lahore as part of their celebrations 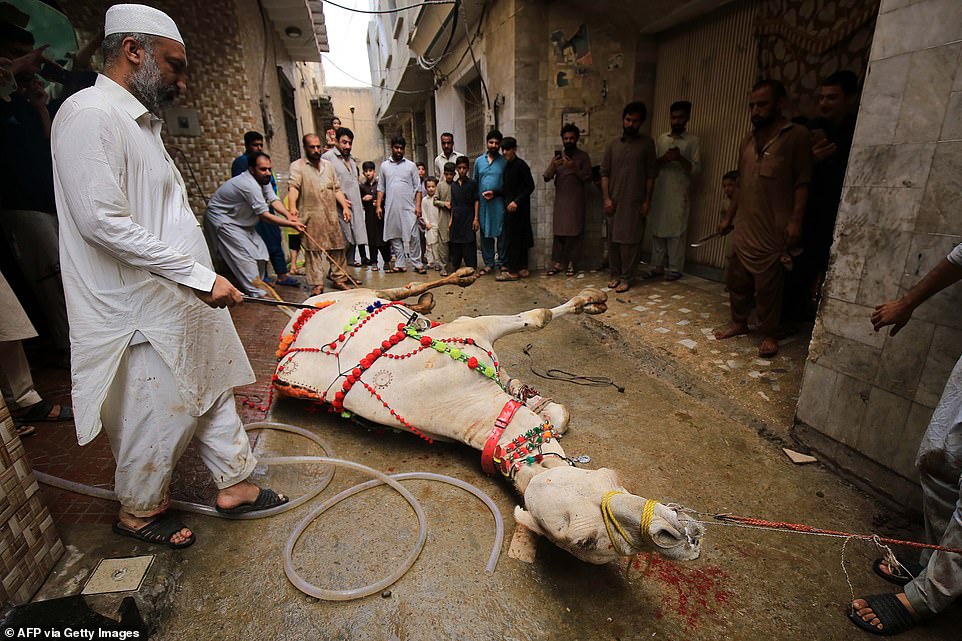 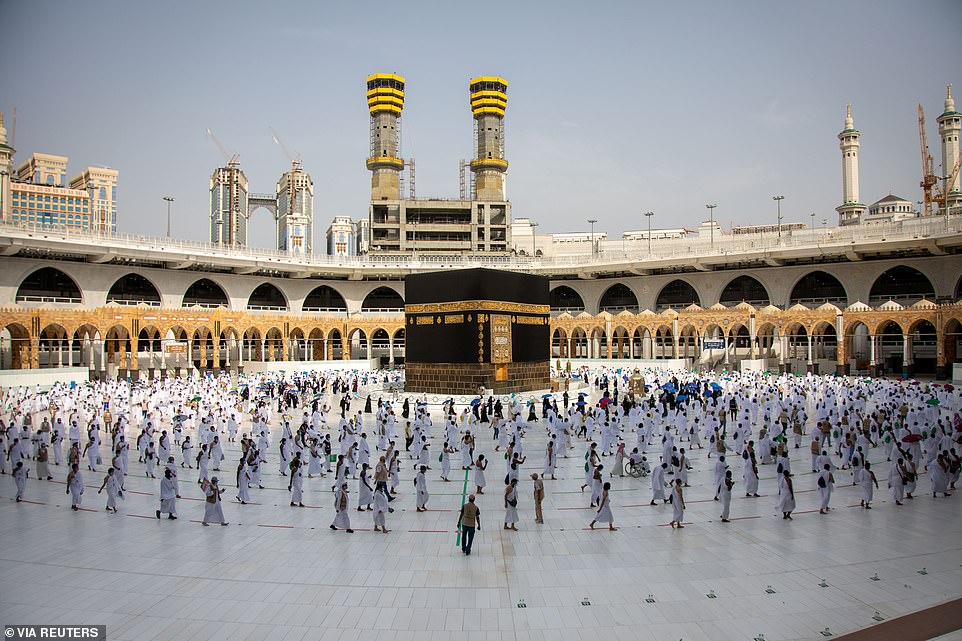 Muslim pilgrims keep their distance as they walk around the holy Kaaba while performing the Hajj pilgrimage in Mecca’s Grand Mosque, which coincides with Eid al-Adha 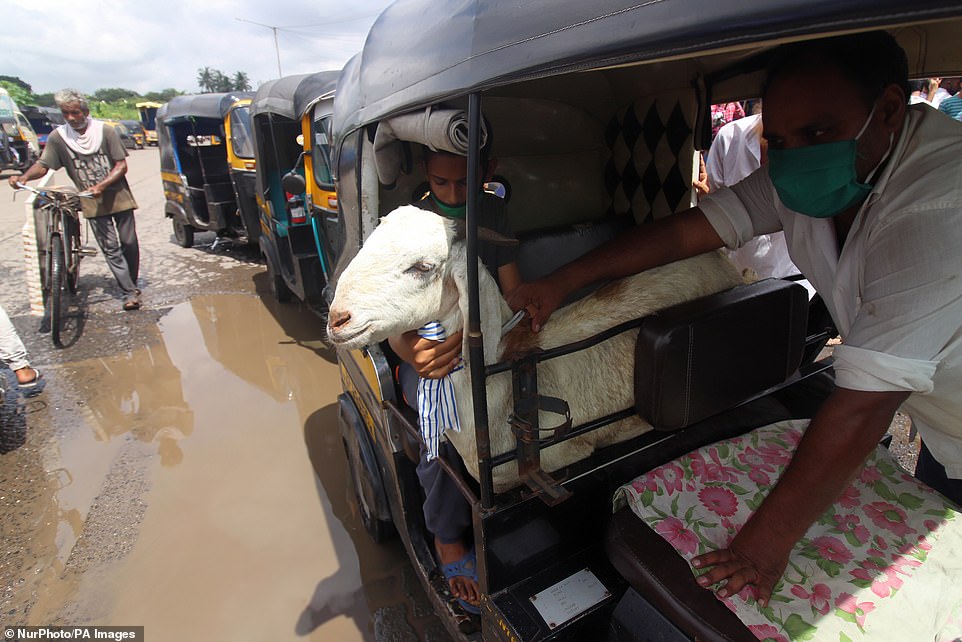 People transport a goat by rickshaw for the start of Eid al-Adha in Mumbia, India, which is taking place in the unprecedented circumstances of the pandemic which has pushed many people closer to poverty 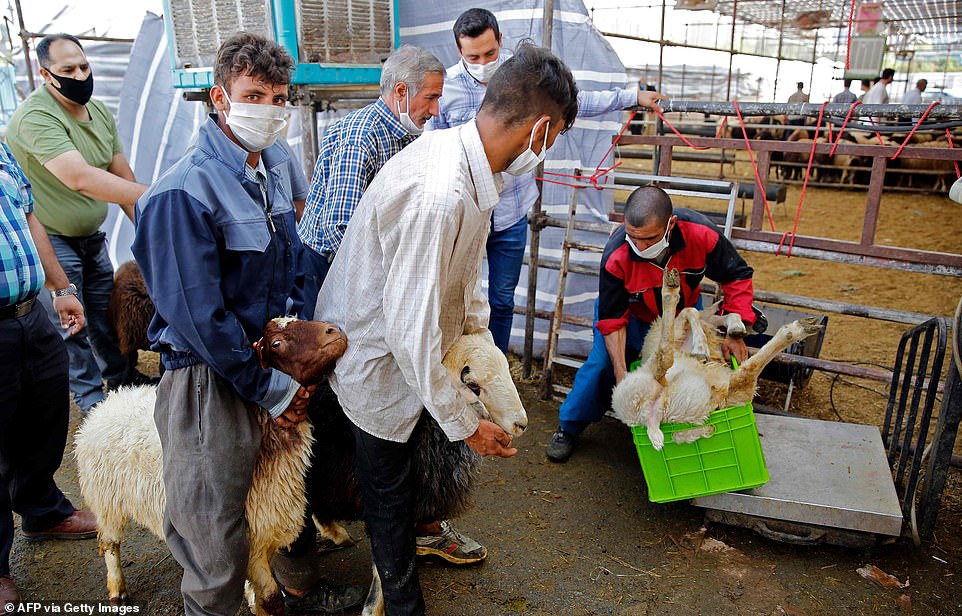 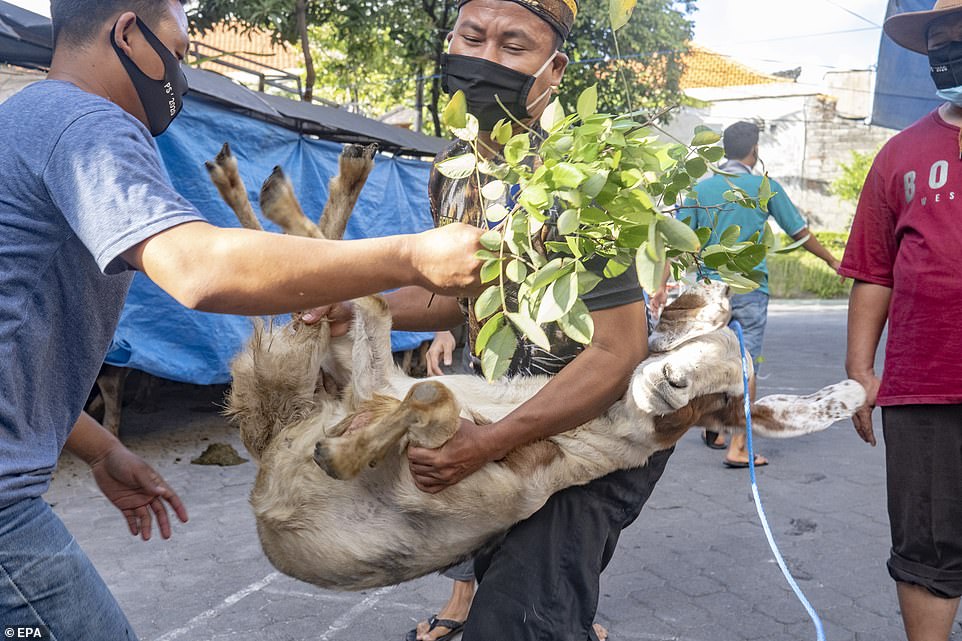 A man carries a sacrificial goat which is typically shared out to celebrate Eid al-Adha in Denpasar, Indonesia

The hajj pilgrimage has also been drastically impacted by the virus. Last year, some 2.5 million pilgrims took part, but this year as few as 10,000 pilgrims already residing in Saudi Arabia were allowed to take part.

The Saudi Health Ministry said there have been no cases of the Covid-19 illness among this year’s pilgrims.

The government took numerous precautions, including testing pilgrims for the virus, monitoring their movement with electronic wristbands and requiring them to quarantine before and after the hajj.

Pilgrims were selected after applying through an online portal, and all had to be between the ages of 20 and 50 years old.

Sheikh Abdullah al-Manea, member of the Supreme Council of Senior Scholars of Saudi Arabia, used the hajj sermon Friday to praise the kingdom’s leadership for their ‘wise decision’ to limit the number of pilgrims and protect human life.

‘We thank the positive role of Muslims around the world that have complied with the regulations of the country to protect them from the spread of this virus, which leads to the protection of Mecca and Medina,’ the sheikh said.