TALK OF THE TOWN: Kate Rothschild’s dilemma over her ex-boyfriend Jay Electronica calling rabbi a ‘coward’ and ‘devil’ before recommending anti-Semitic passages from the Bible to his 373,000 Twitter followers

What is it with rappers and anti-Semitic rants on Twitter?

Just weeks after English grime star Wiley’s tirade against Jewish people saw him banned from the platform, now a member of one of the world’s highest-profile Jewish dynasties, Kate Rothschild, finds herself embroiled in a new storm thanks to her ex-boyfriend Jay Electronica.

The New Orleans rapper, 43, attacked a rabbi who was interviewed earlier this month by American television host Nick Cannon on his YouTube channel. Cannon himself has been suspended by US TV network ViacomCBS for propagating anti-Semitic conspiracy theories. 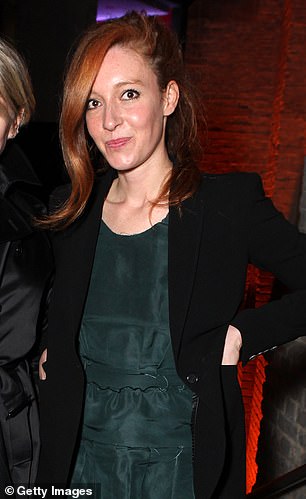 Kate Rothschild, 38, pictured left with Jay Electronica in 2015 and right, at The Roundhouse in London, finds herself embroiled in a new storm thanks to her ex-boyfriend

Electronica blasted in a tweet: ‘Rabbi Abraham Cooper is a coward who lied to our brother Nick Cannon about the history of the Caucasian race. Ask him does he stand behind the vile teachings of the [sacred Jewish text] Talmud? Don’t be a coward next time Cooper you devil.’

He then went on to recommend anti-Semitic passages from the Bible to his 373,000 followers.

Kate, 38, has been conspicuous in her silence over the comments. She remains professionally connected to the musician: he is signed to Jay-Z’s record label Roc Nation, where she holds a senior management position.

Electronica’s tweet, in which he called Rabbi Abraham Cooper a ‘coward’ and ‘devil’ before going on to recommend anti-Semitic passages from the Bible to his 373,000 followers

Kate caused her family great embarrassment when she began an affair with Electronica which ended her marriage to first husband Ben Goldsmith. Kate and Ben split in 2012 after he found text messages on her phone from the American rapper.

Neither Kate nor Electronica, responded to requests for comment. Roc Nation has also not responded.

I hear that eco-friendly Ed Sheeran has turned his country estate into a carbon-neutral oasis.

I’m told Ed, 29, has installed ground-source heat pumps – costing about £18,000 each – linked to underfloor heating systems in the houses on his Suffolk spread.

That means his gas and electricity bills will go down – but with a reported fortune of £200 million, I don’t think he’ll notice…