Two new game-changing tests will be offered to millions of Britons in a major advance in the war on coronavirus.

Hailed as ‘transformative’, the tests – which give results in 90 minutes – will start being rolled out from next week. One is so simple it could soon be deployed in airports, offices, schools, pubs and restaurants – bringing testing to the bulk of the population.

Health Secretary Matt Hancock last night described the move as ‘lifesaving’ as the Government looks to avert a second wave of the disease, prevent the need for draconian lockdowns and restart the stalled economy.

The two tests will initially be introduced in the NHS and care homes before being made available more widely over the next few months.

Matt Hancock described the introduction of two new game-changing tests for coronavirus, which give out results in 90 minutes, as ‘lifesaving’

Unlike current tests given mainly to patients who already think they  have the virus, the new methods will be used to routinely screen members of the public who show no symptoms.

Officials hope they will flag up local outbreaks before they take hold, avoiding the need for local lockdowns such as that imposed in the North West last week.

Crucially, both tests can also tell patients if they have the flu even if their result is negative for Covid-19. This means health authorities will be able to track the spread of the two viral illnesses around the country and carry out flu jab campaigns.

Ministers are anxious to avoid a major flu outbreak this winter amid fears it will coincide with a spike in Covid and put an unprecedented strain on the NHS.

One of the methods, the Lampore test, involves taking a sample of saliva, unlike existing methods which require invasive and difficult nose and throat swabs.

Professor Andrew Beggs, a genetics expert at the University of Birmingham, who has been trialling the Lampore test, described it as ‘transformational’.

He said: ‘A rapid test which works off saliva and gives you a result in a maximum of two hours is enormously powerful. It’s definitely an advance on the tools we have at the moment.’

The other test, known as DNANudge, will be launched next month. It analyses DNA in nose swabs but saves time as the results do not need to be sent to a laboratory. Results of current methods can take from 24 hours to four days to come back. 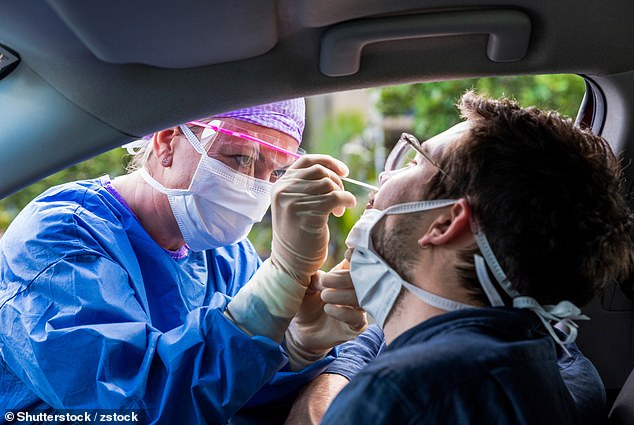 One of the methods, the Lampore test, involves taking a sample of saliva, unlike existing methods (above) which require invasive and difficult nose and throat swabs (file photo)

The companies involved would not reveal the cost but claim it is similar or cheaper to current tests – which are around £18 privately but less to the NHS.

Today’s announcement offers new hope after days of grim warnings of a second wave. Figures last week showed new infections had risen by a third, prompting the Chief Medical Officer Professor Chris Whitty to tell the country it had ‘reached the limits’ of its lockdown easing.

A major incident has been declared in Greater Manchester due to increases in coronavirus infection rates across ‘multiple localities’.

Sir Richard Leese, of Manchester City Council, said people ‘should not be alarmed’.

He said: ‘This is standard practice for complex situations which require a multi-agency response.’

He added: ‘Although the council and partner organisations have been working closely to tackle the impacts of the pandemic since early this year, declaring a major incident means we can ramp this up further.

‘It allows the establishment of a central command structure to oversee the response and enables agencies involved to draw on extra resources.’

Mr Hancock described the tests as ‘life-saving innovations’. He said: ‘Millions of new rapid coronavirus tests will provide on-the-spot results in under 90 minutes, helping us to break chains of transmission quickly.

‘The fact these tests can detect flu as well as Covid-19 will be hugely beneficial as we head into winter, so patients can follow the right advice to protect themselves and others.’

Neither of the new tests need to be administered by medically-trained professionals. The developers of the Lampore test, Oxford Nanopore, hope it can be routinely used at airports, avoiding the need for quarantine.

The DNANudge test has been trialled in eight hospitals, on cancer, accident and emergency and maternity wards. Now 5,000 ‘Nudgebox’ machines will be rolled out across hospitals nationwide.

The Government has the capacity to test 220,000 people a day but ministers want to increase this to 500,000 by autumn.

Niall Dickson, chief executive of the NHS Confederation, said: ‘The news of quicker tests is encouraging and should mean we have a further weapon in our armoury to defeat the virus.’

Saffron Cordery, deputy chief executive of NHS Providers, said: ‘Having the ability to rapidly test and report the results will help the NHS and other care providers with the challenge of continuing to restart routine services, plan for winter and deal with a potential second surge in Covid-19.’

The development came as ministers ditched a promise to test all residents and staff in care homes throughout the summer due to supply problems.