A decision to remove the pews inside a 700-year-old church in case obese couples struggle to walk down the narrow aisle has been met with outrage among parishioners.

The 32 Victorian pews have been put up for sale for £200 each as part of alterations to the inside of Grade II listed St Andrew’s Church in the Dorset village of Okeford Fitzpaine.

The wooden seats, which are fastened to the floor, will be replaced with modern chairs that can be easily moved to create space when necessary.

Parishioners, including Dolly the dog, gathered to protest in the grounds at St Andrew’s Church in the village of Okeford Fitzpaine, Dorset 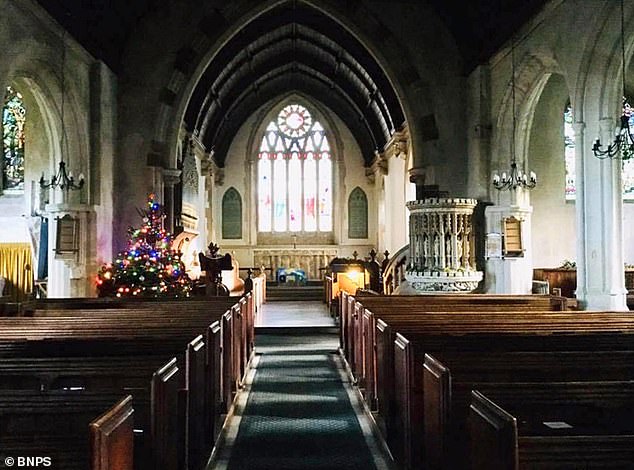 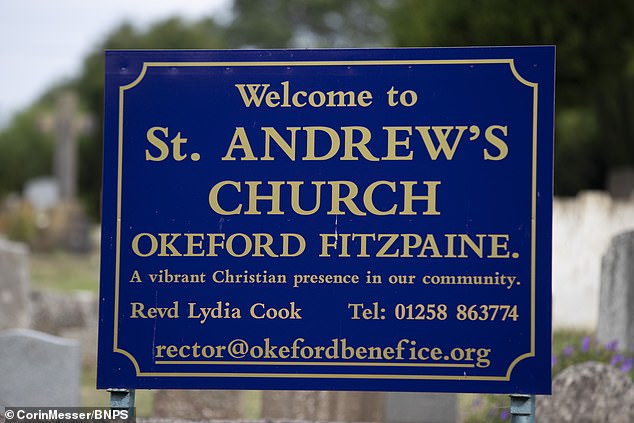 The church authorities state this will make it easier for disabled people and wheelchair users to access the nave as well as allow the congregation to socially distance.

But they also say that getting rid of the 16 rows of pews would remove a potential ’embarrassment’ involving overweight brides and grooms squeezing down the aisle.

A report by the Parochial Church Council (PCC) states: ‘We have also had occasions at weddings where the couple have been too large to be able to walk side by side down the aisle. With chairs we would be able to widen the aisle.’

And doing away with the historic pews would also remove the health and safety risk of people tripping over them.

The pews have been listed for sale in the parish magazine and on Facebook and will be collected by the buyers next week ahead of the work starting.

In the meantime an ugly row in the picturesque village has ensued, leading to claims and counter claims between the rector, Reverend Lydia Cook, and her parishioners.

They claim she has locked them out of the church as a result of their protests which have included a demonstration with banners reading ‘Save the pews from the devil within.’ 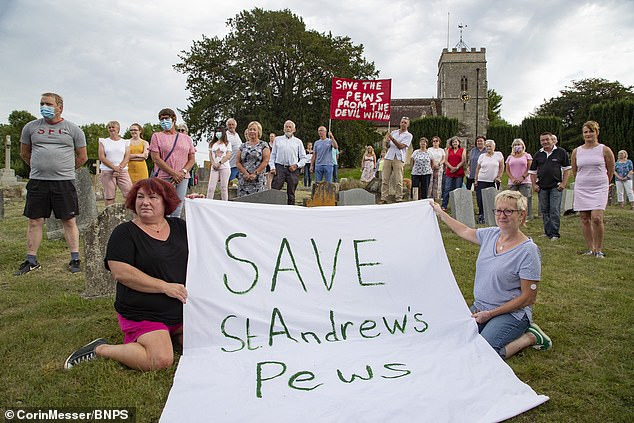 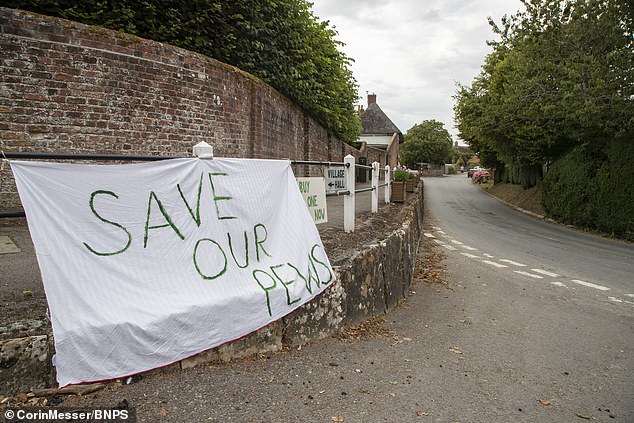 Rev Cook has reported a perceived threat of criminal damage to the building to the police.

Helen Sherwood Clinkard, a spokeswoman for the Save St Andrew’s Pews group said: ‘There are about 1,000 people in Okeford Fitzpaine and I would have said three quarters of them are against what is happening.

‘We were totally unaware about the gutting of the church and the removal of the pews until they were recently listed for sale.

‘The pews are part of the history and heritage of the church. If you strip out the pews then the soul of the church is gone.

‘I have seen a picture of the chairs that will replace them. They are horrible. They look cheap and cheerful.

‘I wrote to the vicar and she sent me this statement of needs from the PCC.

‘I was gobsmacked when I read some of the reasons for wanting rid of the pews.

‘There have been weddings in that church for generations and to my knowledge there has never been an issue before about large people not being able to fit down the aisle.

‘How is it that the human body is now so different to that of our great-great grandparents? 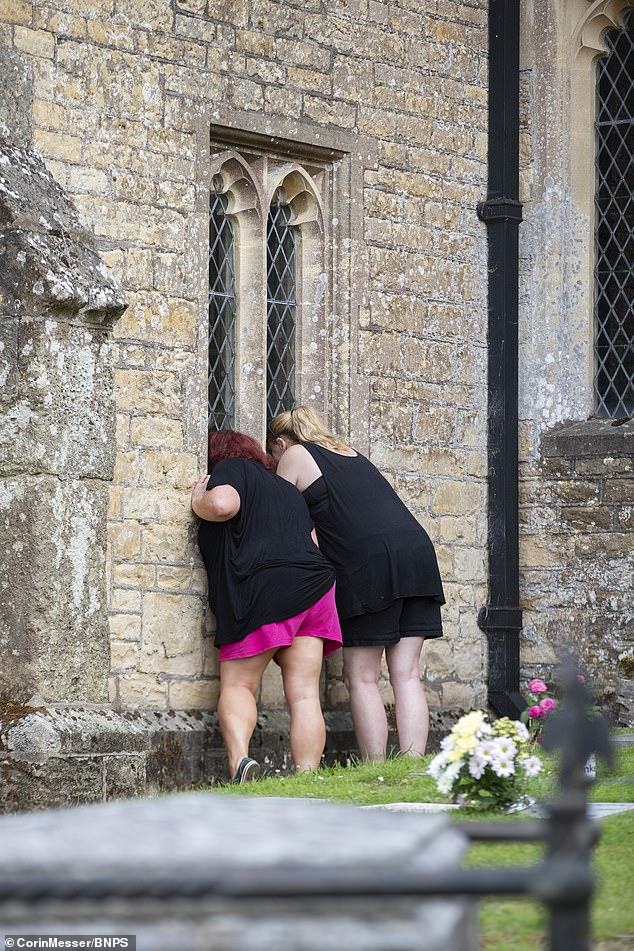 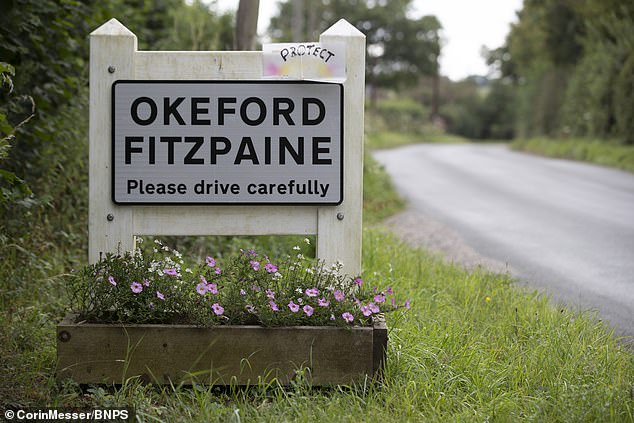 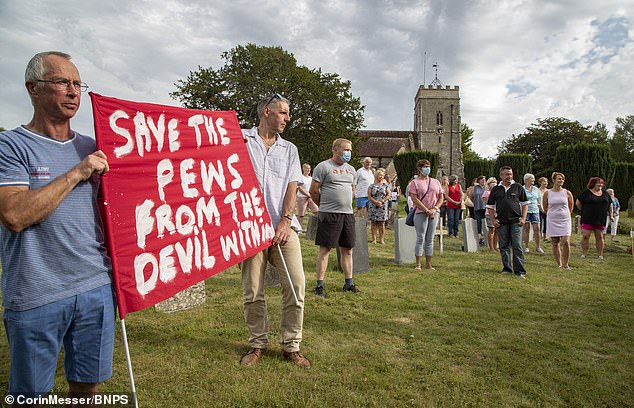 Helen Sherwood Clinkard, a spokeswoman for the Save St Andrew’s Pews group, said around three quarters of the 1,000 people who live in Okeford Fitzpaine are against what is happening

‘I am 68 and I have been to that church most of my life. I have never seen or heard of anyone trip over one of the pews before.

‘It all seems like a poor excuse to rip out the pews.’

In creating an open and versatile space the church will be able to host more community events, such as messy church and jumble sales.

But objectors point out that the village hall, which is unconnected to the church, currently holds those types of events and the two buildings would be in competition with each other.

The decision to strip out the pews was made after a four year legal process and consultation with villagers that was undertaken by the PCC.

Leaflets were delivered to every household in the village and a public meeting was held.

The changes were for underfloor heating to be installed and a toilet added but the objectors claim they were not aware the re-ordering meant getting rid of the pews until they read an article in the parish magazine about the ‘replacement of the Victorian pews with new chairs’ last autumn.

Since then the pews have been listed for sale in the same magazine.

A spokesman for the Diocese of Salisbury confirmed St Andrew’s church is closed until mid-September but only because of COVID-19 restrictions.

He said Rev Cook had received an email that lead her to inform the police of a possible threat of vandalism to the church.

The PCC cited an example from another church of a newly-wed couple who were left distressed and embarrassed that they could not fit down the aisle and they wanted to avoid a similar situation at St Andrews’s which has a particularly narrow aisle.

In a statement the Bishop of Salisbury, the Right Reverend Nicholas Holtam, said he fully supported the changes to St Andrew’s Church.

He said: ‘Churches are community buildings which have to adapt to the needs of the community as those needs change.

‘The changes have come after a very wide consultation and ample opportunity over a long period to comment on the proposals.

‘Although I am unable to control what the PCC does with the church building, I am able to say that I am fully supportive of their plans which are designed to enable the church building to continue to be a valuable asset to the community into the future.

‘Some pews are being removed and have been offered for sale on Facebook. Such a public sale is hardly consistent with a suggestion that has been made that the works are being conducted secretively.

‘The removal of the pews will make it easier to achieve social distancing at public worship.’