Despite not being able to talk, dogs process speech in the same way as humans do, according to a new study.

Both dogs and human brains separately process the intonation – how a voice rises and falls – and the meaning of the words spoken.

‘Exploring speech processing similarities and differences between dog and human brains can help a lot in understanding the steps that led to the emergence of speech during evolution,’ said study author Anna Gábor at Eötvös Loránd University in Budapest, Hungary.

‘Some years ago, we discovered that dog brains, just as human brains, separate intonation and word meaning – but is the hierarchy also similar?

‘To find out, we used a special technique this time – we measured how dog brain activity decreases to repeatedly played stimuli.’

Dogs are well-known to have a sensitivity to human communicative signs, including vocal signals.

Both intonation and the meaning, or lexicality, of the words carry information for our canine companions.

When we praise dogs with a high toned voice, they may notice the positive intent and appear happy.

Dogs can respond to various words and phases, such as sit, lie down, play dead, wait or heel – but it’s not just the intonation that carry their meaning.

Many dogs still recognise the word or phase and respond in turn even if we’ve changed the intonation. 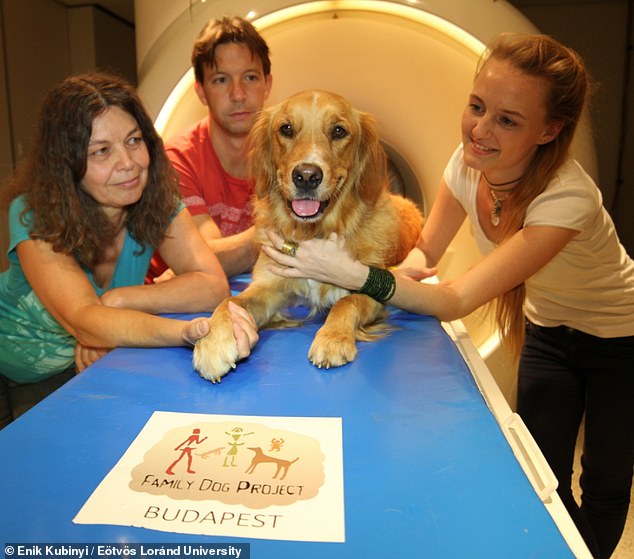 A dog and researchers at the scanner. The research team previously found that dogs separately analyse lexical and intonational cues to decipher meaning

However, researchers have known very little about on what is going on in doggy brains during these interactions.

Dogs listened to familiar praise words or phrases – ‘clever’, ‘well done’, ‘that’s it’ – and unknown, neutral terms – ‘such’, ‘as if’, ‘yet’ – both in praising and neutral intonation.

‘Stronger decrease in a given brain region to certain repetitions shows the region’s involvement.’

Simpler, emotionally loaded cues, such as intonation, are typically analysed at lower stages, while more complex, learnt cues, such as word meaning, are analysed at higher stages in multiple species, including humans.

Interestingly, older dogs distinguished words less than the younger dogs in the study.

‘Although speech processing in humans is unique in many aspects, this study revealed exciting similarities between us and a speechless species,’ said study author Attila Andics at Eötvös Loránd University.

‘The similarity does not imply, however, that this hierarchy evolved for speech processing. 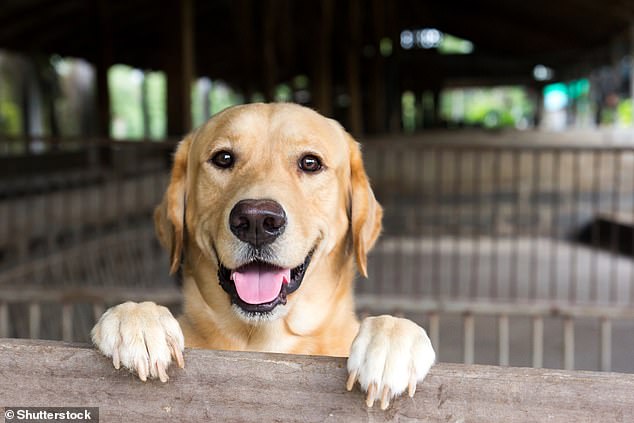 Much of the relationship between dog and human is based on speech from the latter. Dogs’ sensitivity to human communicative signs is well known

‘Instead, the hierarchy following intonation and word meaning processing reported here and also in humans may reflect a more general, not speech-specific processing principle.

‘What our results really shed light on is that human speech processing may also follow this more basic, more general hierarchy.’

The research team previously found that dogs separately analyse lexical and intonational cues to decipher meaning, published in Science in 2016.

Doggy methods to separately analyse and integrate word meaning and intonation suggest that this capacity can evolve in the absence of language, the team said.

This new study has been published in Scientific Reports.

How fMRI scans track what happens in the human brain

Functional magnetic resonance imaging (fMRI) is one of the most recently developed forms of neuroimaging.

It measures the metabolic changes that occur within the brain, such as changes in blood flow.

Medical professionals may use fMRI to detect abnormalities within the brain that cannot be found with other imaging techniques, measure the effects of stroke or disease, or guide brain treatment.

It can also be used to examine the brain’s anatomy and determine which parts of the brain are handling critical functions.

A magnetic resonance imaging (MRI) scan uses a magnetic field rather than X-rays to take pictures of body.

The MRI scanner is a hollow machine with a tube running horizontally through its middle.

You lie on a bed that slides into the tube of the scanner.

Equipment used in fMRI scans uses the same technology, but is more compact and lightweight.

The main difference between a normal MRI scan and a fMRI scan is the results that can be obtained.

Whereas a normal MRI scan gives pictures of the structure of the brain, a functional MRI scan shows which parts of the brain are activated when certain tasks are carried out.

This includes language, memory and movement.