Queuing chaos struck again at Heathrow Airport last night as UK arrivals were forced to wait in long lines with no social distancing measures – while Border Force chiefs pointed the finger of blame at passengers for not filling in the right forms.

Rows of face mask wearing passengers were last night seen queuing around the barriers of an escalator – in close proximity to each other –  as they approached passport control at Heathrow’s Terminal 5.

The queues mirrored similar scenes on Saturday, where hundreds of passengers were crammed into queues after just three officers were left to check passports.

Saturday’s scenes were branded dangerous by one leading Labour MP, while Heathrow Airport chiefs blamed the Border Force and called on officials to put more staff on at passport control.

Border Force chiefs last night apologised for the delay but blamed passengers for not complying with the passenger locator forms as well as a number of big family groups, preventing them from using e-gates. 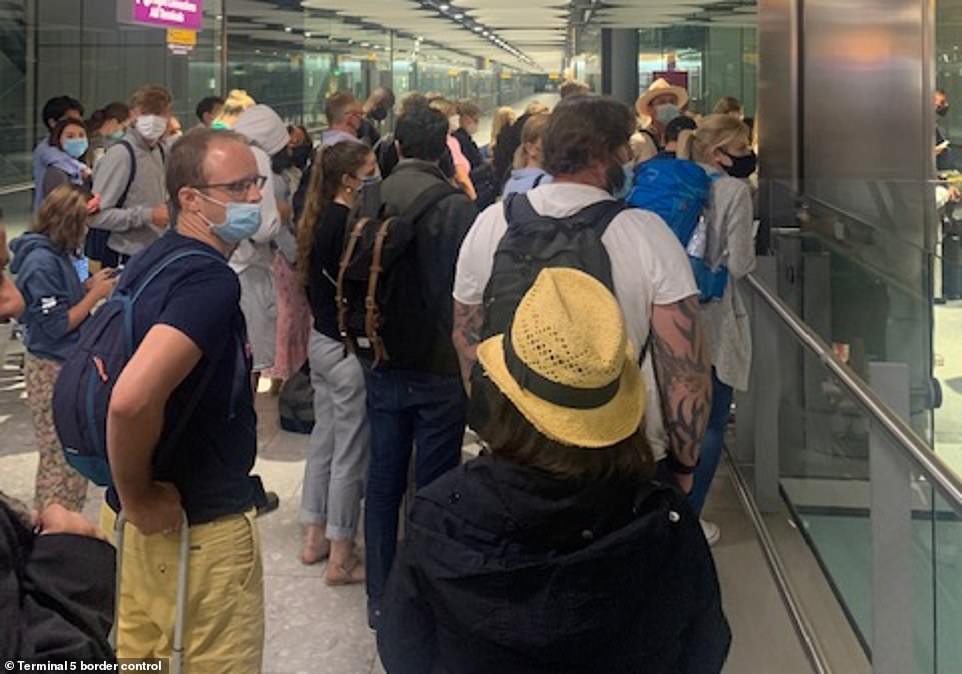 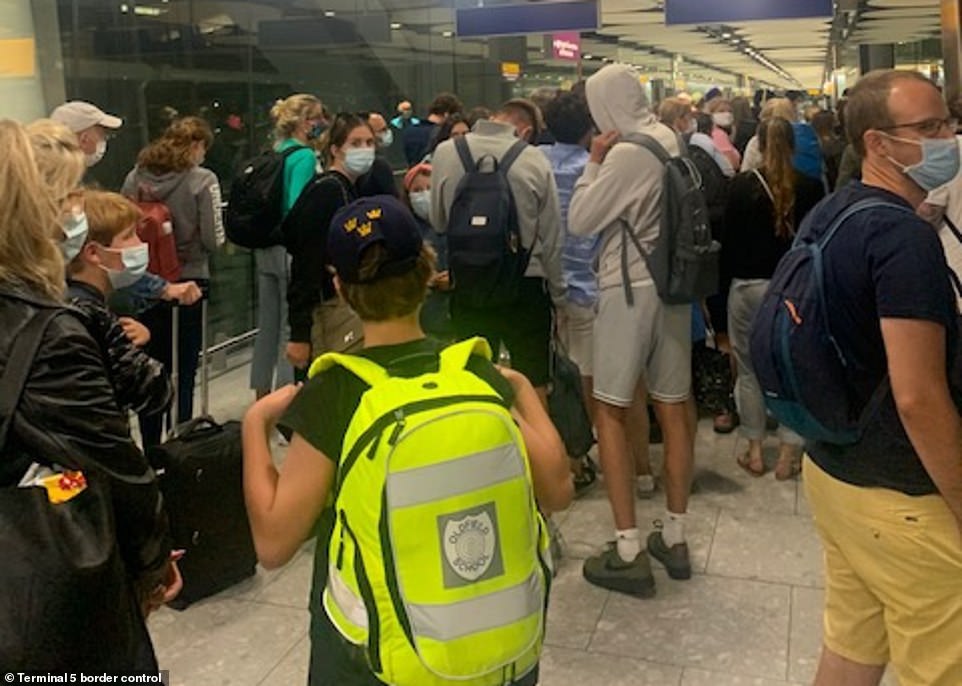 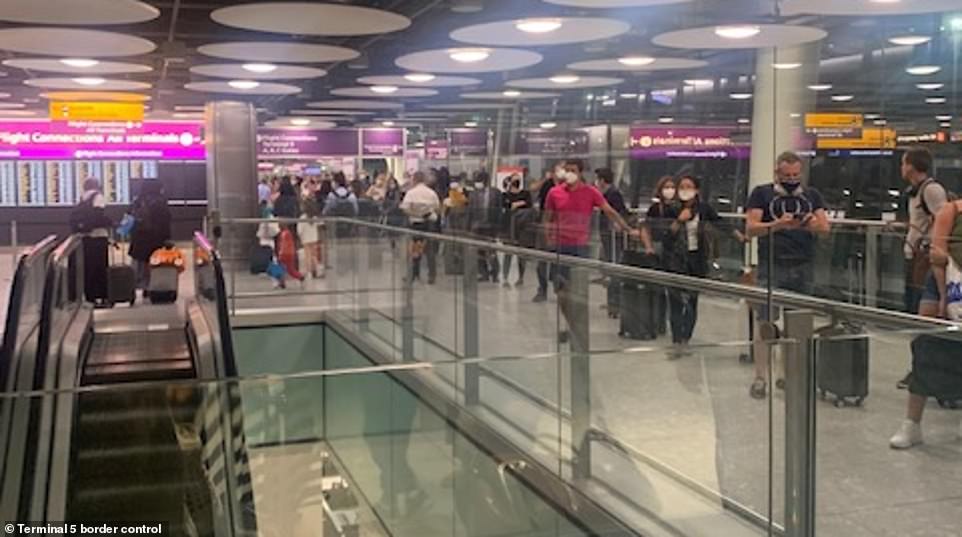 The queues went around the barrier to an escalator near to one of the passport control areas, as passengers made their way towards the arrivals area 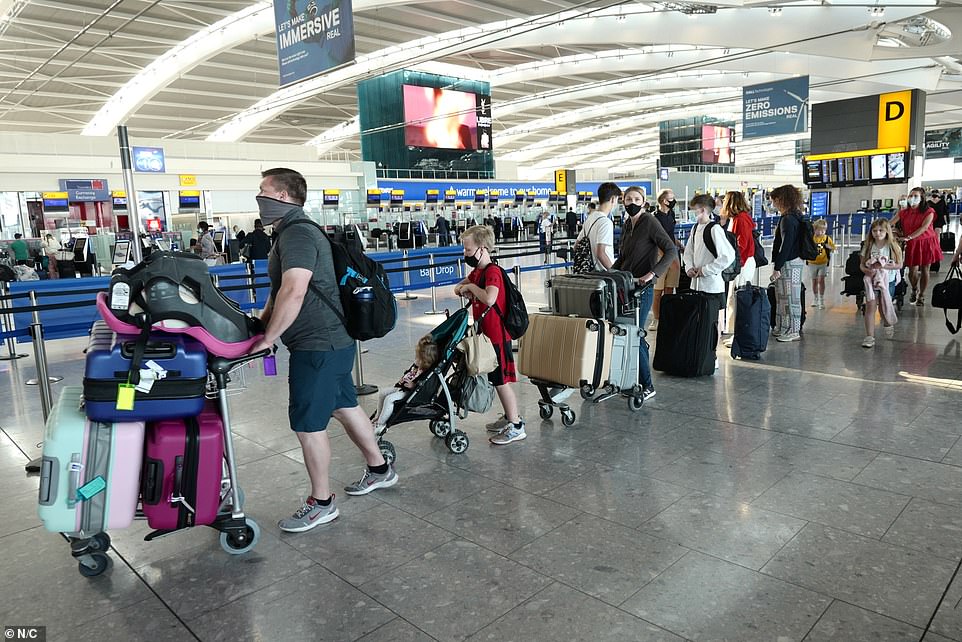 Queues for departures today were also busy at Terminal 5 today, though measures were in place to keep passengers apart 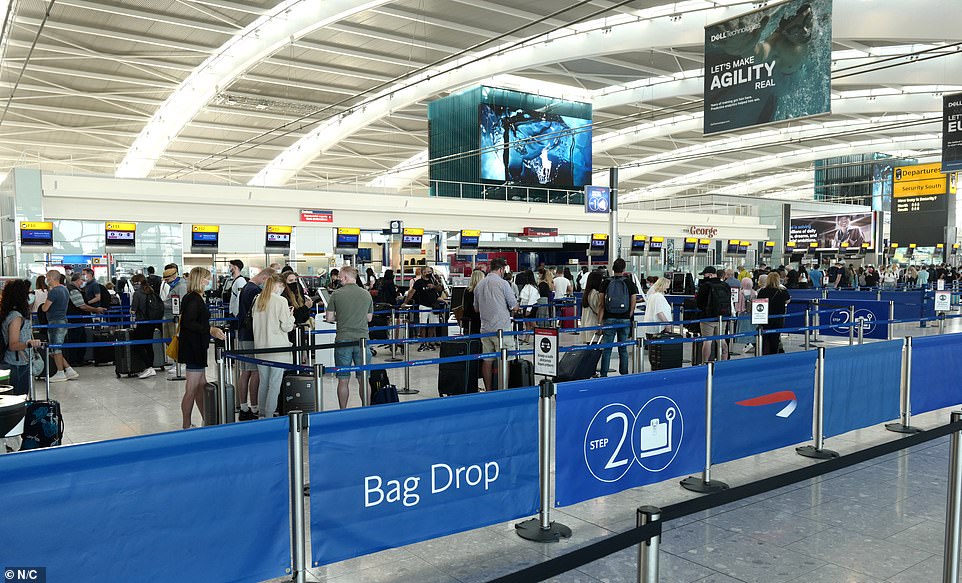 Passengers queued at the bag drop for British Airways at Heathrow this morning, where queuing systems are in place

Passenger locator forms must be filled in before passengers arrive in the UK and are used by the government to contact those who have travelled with someone who has developed Covid-19 symptoms.

The are a legal requirement and those who refuse to fill one in can face a £100 fine.

The latest queuing chaos took place around 11pm last night as passengers arrived back in the UK from international flights.

What are passenger locator forms and what happens if you refuse to fill one out?

Passenger locator forms must be filled in before passengers arrive in the UK.

The service is free and is used by the government to contact those who have travelled with someone who has developed Covid-19 symptoms.

Passengers need to show a completed form when you arrive at the UK border, either by printing a copy, or showing it on a phone.

The forms are a legal requirement and those who refuse to fill them in could face a £100 fine.

If a passenger needs to self-isolate the the government will use the information to contact them and to check that they are self-isolating.

You do not need to complete the form if you’re travelling from Ireland, the Channel Islands and the Isle of Man and you were there for 14 days or more.

Passengers were seen joining a long queue which hugged a barrier around an escalator and towards passport control.

Though passengers were all seen wearing a mask – which is now a legal requirement at airports – many appeared packed in together, seemingly in breach of social distancing rules.

Photographs and video appear to show little or no social distancing or queuing measures in place as passengers queued for passport control at Terminal 5 – which along with Terminal 2 are currently the only two terminals open at Heathrow.

On Saturday, photographs and videos showed hundreds of passengers queuing up to wait at for passport control at Heathrow.

The travellers, many with young families, even chanted ‘we want more staff’ as the lines in the ‘poorly ventilated’ room stretched for at least an hour.

One passenger, Natalie Crane, 32, from Surrey, had arrived back from a holiday to Majorca with her husband, mother, and three young children when she was faced with a two-hour delay.

She said: ‘We queued with about 500 or 600 people; there was no social distancing, no ventilation – it would have been impossible to socially distance that many people in the room. It was just barbaric.

While the central London airport’s self service E-gates were operating, Natalie and dozens of other parents couldn’t use them because of age restrictions on children, and had to see a border officer.

‘After a while we found out there is only three people on the counters checking passports, so then everyone started chanting get more staff get more staff, this a disgrace. 10 minutes later all of a sudden you’ve got about 10 staff on.

‘When we complained to one of the staff on the counters because he wasn’t making people aware he was available, his response was ‘don’t go on holiday’.’

‘There was no compassion from the staff whatsoever.’

A spokesperson for Heathrow Airport told MailOnline that the queues were ‘totally unacceptable’, but that Border Force have forecasting systems to help avoid passenger queues on arrival. 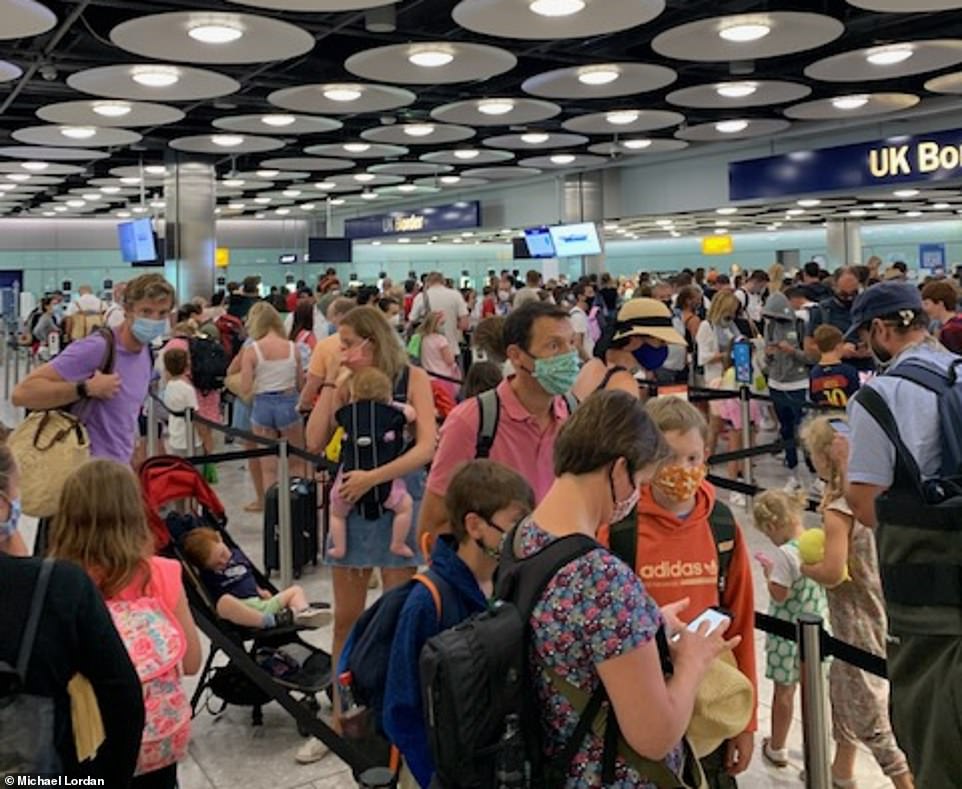 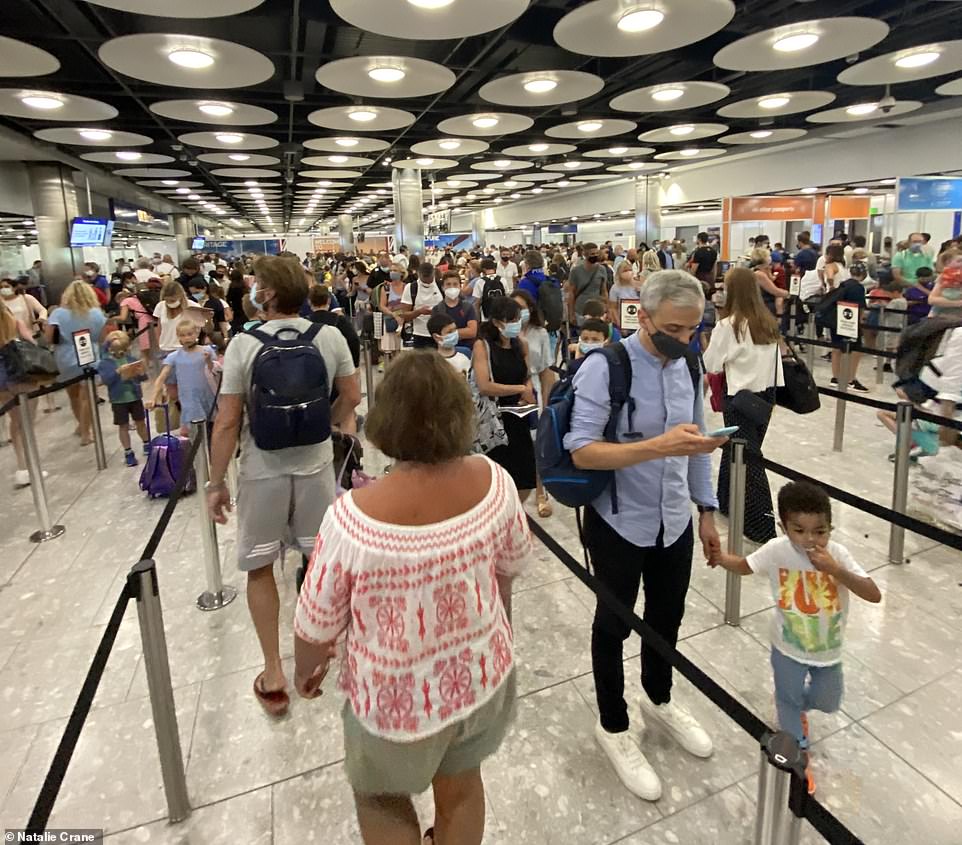 The travellers, many with young families, even chanted ‘we want more staff’ as the lines in the ‘poorly ventilated’ room stretched for at least an hour

The spokesperson also called for the Border Force to ‘sort out’ its resourcing in order to prevent issues in arising again in the future.

Emma Moore, Border Force Chief Operating Officer said: ‘Border Force apologise for the extensive queues and delays that occurred at Heathrow Airport. We understand the significant inconvenience and discomfort this would have caused those affected.

‘We are working with Heathrow Airport to ensure this does not happen again and social distancing measures are maintained while dealing with the increased number of passengers arriving at the airport.

‘We would urge travellers to fill in their passenger locator forms before travelling to the UK to avoid any delays.’

Nick Thomas Symonds, Labour’s Shadow Home Secretary, described Saturday’s scenes at Heathrow as ‘unacceptable’ and ‘dangerous in the midst of a global pandemic’.

Mr Symonds told MailOnline: ‘These scenes at Heathrow Airport show that Border Force have been over-stretched, which is totally unacceptable.

‘The Home Office needs to get a grip of this issue – it is a huge inconvenience for travellers, unfair on Border Force staff and frankly dangerous in the midst of a global pandemic.’