From the outside, it has elements of the celebrity haunt Soho Farmhouse, while on the inside there is a Playstation console-shaped kitchen island and a Mr Benn-inspired walk-in wardrobe.

And as you’d expect from that, the Long Barn is a house with a story to tell.

The property is a 200-year old building that was painstakingly converted over four years.

The work started in 2015, with owner Jason Howlett and his three children living in a static caravan on the six-acre rural site just outside of Royal Wootton Bassett, in Wiltshire.

The Long Barn is on the market for ‘offers over £1.9million’ via Richard James estate agents

It was back to basics from the onset, with the family having no mains-connected water or electricity for their first summer at the site.

Mr Howlett bought the plot with the derelict barn for £500,000 and then proceeded to spend a further £1million renovating it.

By his own admission, he ‘overdeveloped’ the site, but this was never about making money for him – rather rescuing a building that was ‘falling down’ and turning it into a family home. 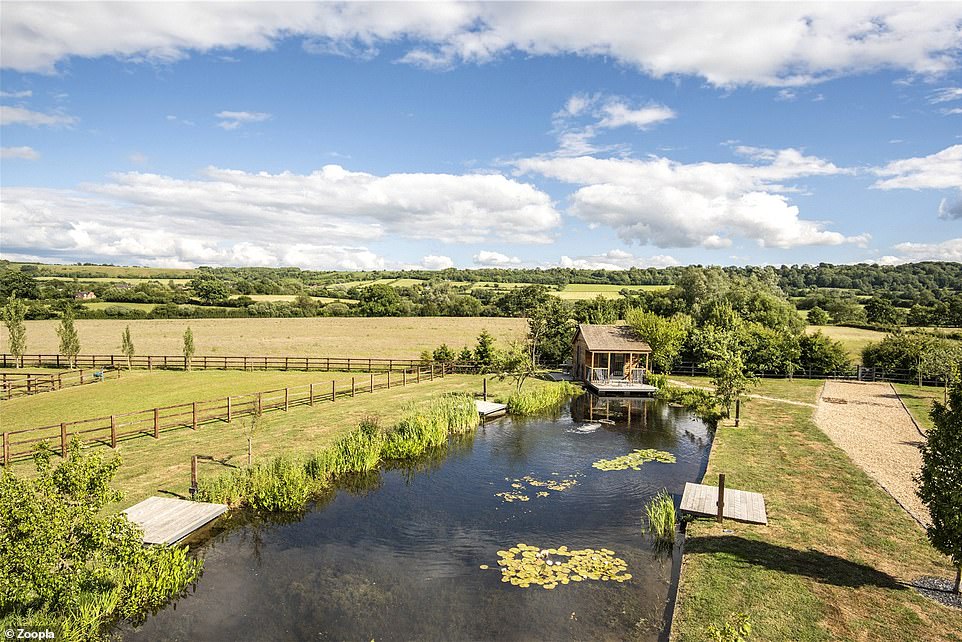 Idyllic countryside property: The Long Barn is near Royal Wootton Bassett, in Wiltshire and features a natural swimming pond

MailOnline Property took an exclusive tour around the property and spoke to Mr Howlett about his passion for the renovation work at The Long Barn.

We arrived on a sunny summer’s day when the property couldn’t have looked more idyllic or tempting, especially during lockdown when demand is high for large open green spaces – especially if they are private.

And this space is certainly that with equestrian facilities, landscaped gardens and an oxygenated natural pond that is so clear you can swim in it. 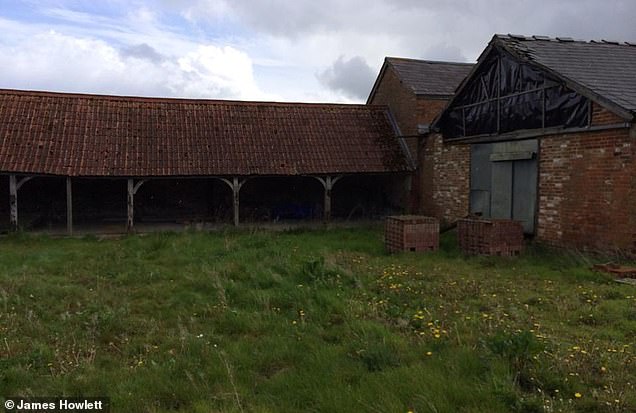 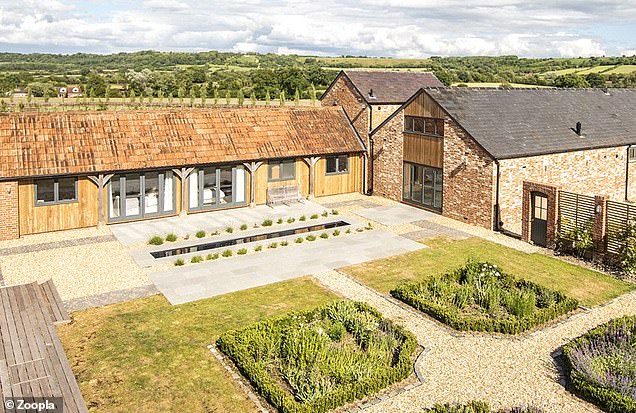 Before and after! The renovation works were started in 2015 and took four years to complete 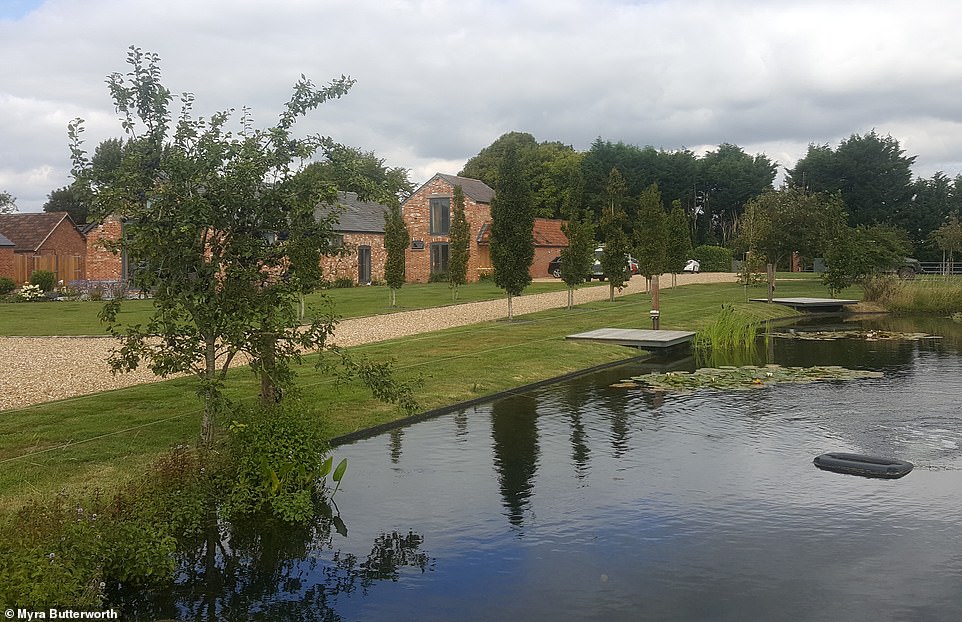 Taking a closer look: We took an exclusive tour around the property and spoke to the owner Mr Howlett 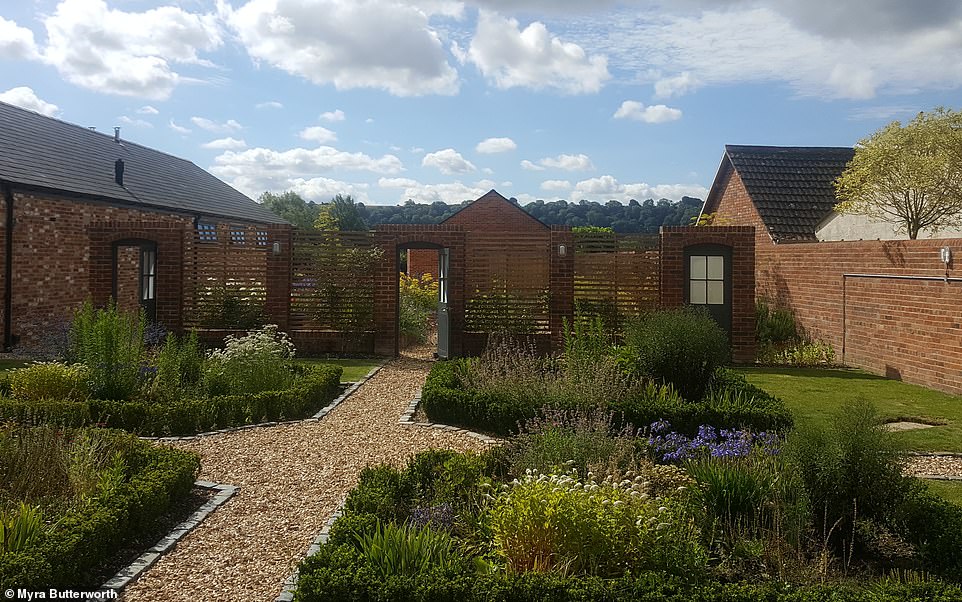 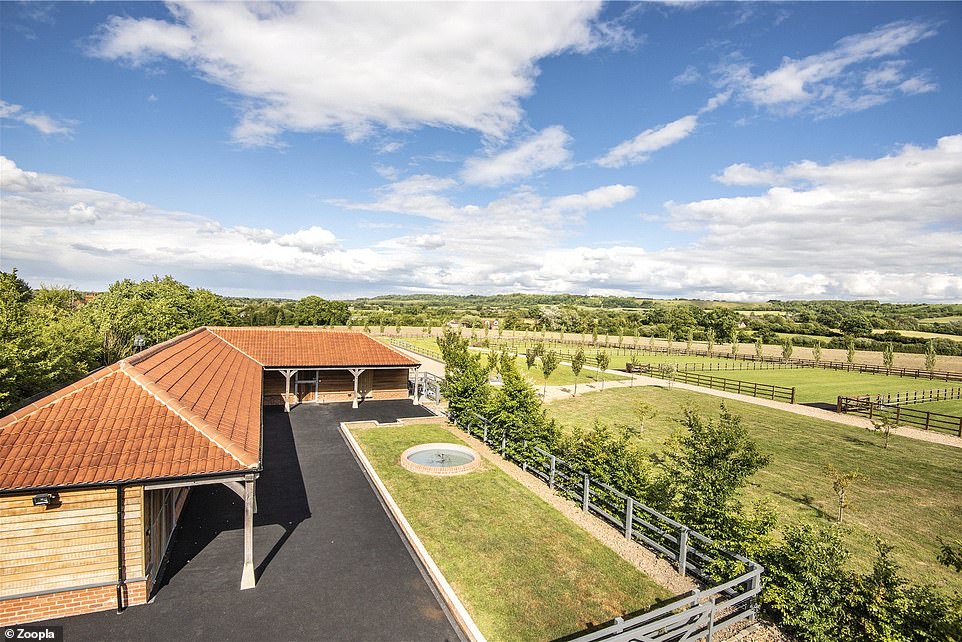 Mr Howlett explained why he first bought the property, saying: ‘I have always loved barns. I used to live in Woking and I yearned for the country life and ponies.

‘I wanted a project and something that was beautiful. I saw it for sale and it needed rescuing. I love rescuing things that are falling down.’

He took his time over the renovation saying he ‘didn’t want to rush any decisions’.

‘I wanted to retain the heritage of the building and merge the old with the new,’ he said.

While he had an architect – Simon Chambers of LPC – he did not use an interior designer, instead researching everything himself.

‘My first vision was a stainless steel kitchen but I reined it in as it could have been too industrial and masculine. I tried to make it lighter and softer with glass.’

He said: ‘The property has a Soho Farmhouse feel to it. For my tastes, I have never seen such a beautiful property and I know every inch of it.

‘For example, he points out the stone signs, which are handmade and reveal the chisel where the name was carved out – but only if you look closely enough.’

The 40 foot vaulted kitchen took seven months to complete and includes £10,000 worth of taps. And the high quality appliances feature names such as Gaggenau and Miele. 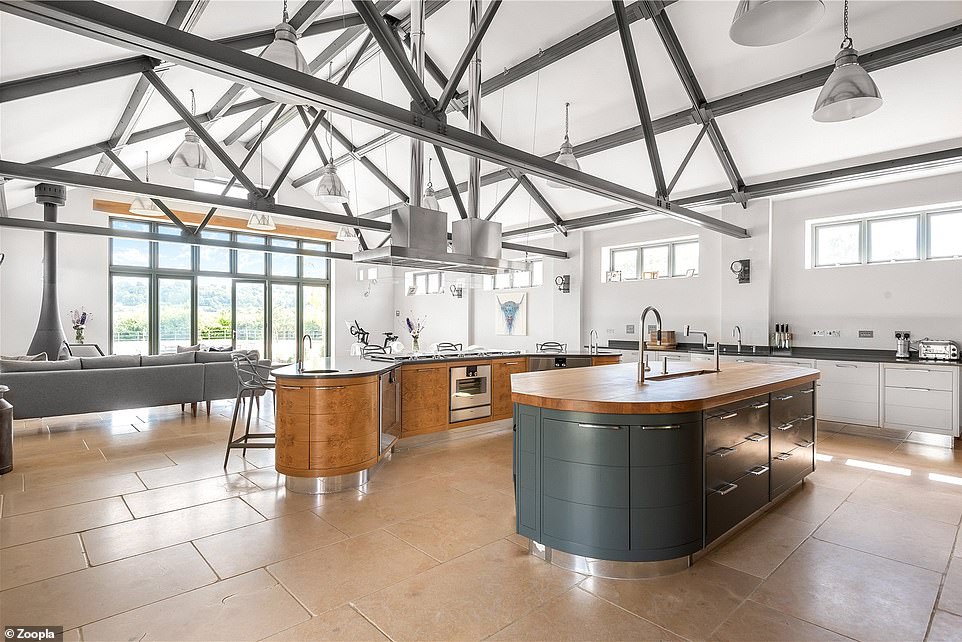 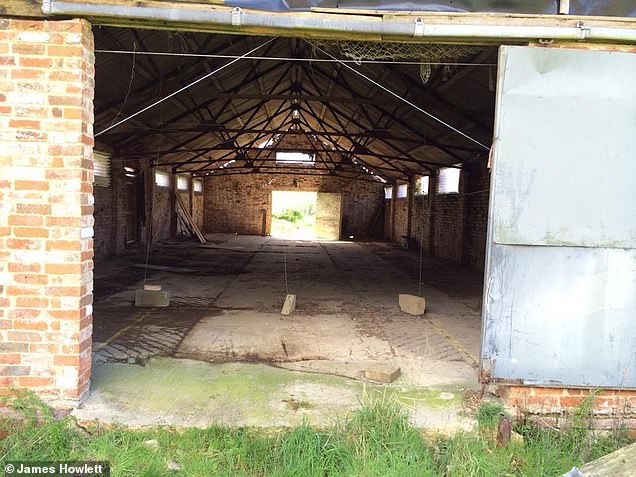 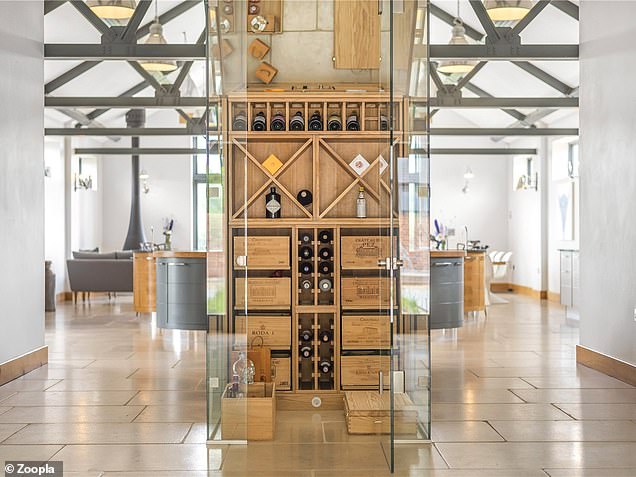 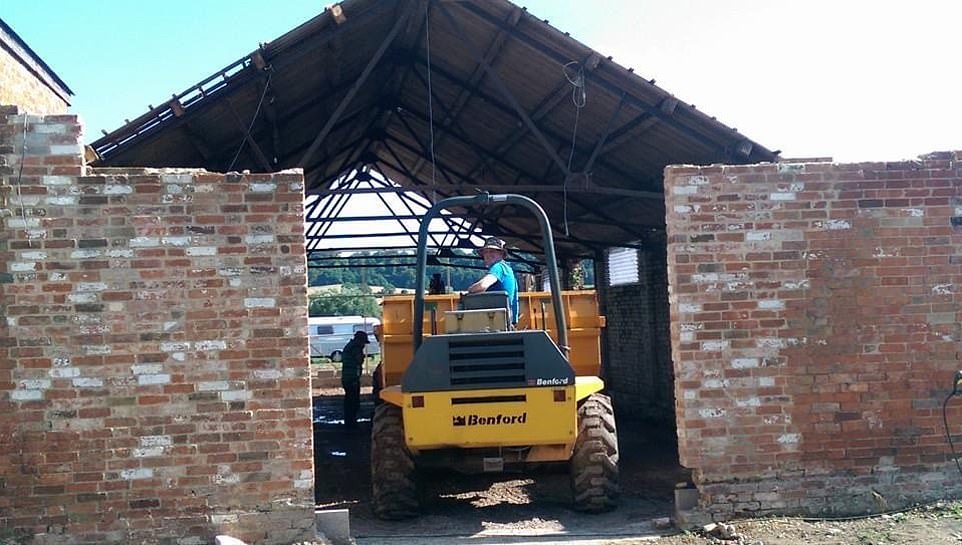 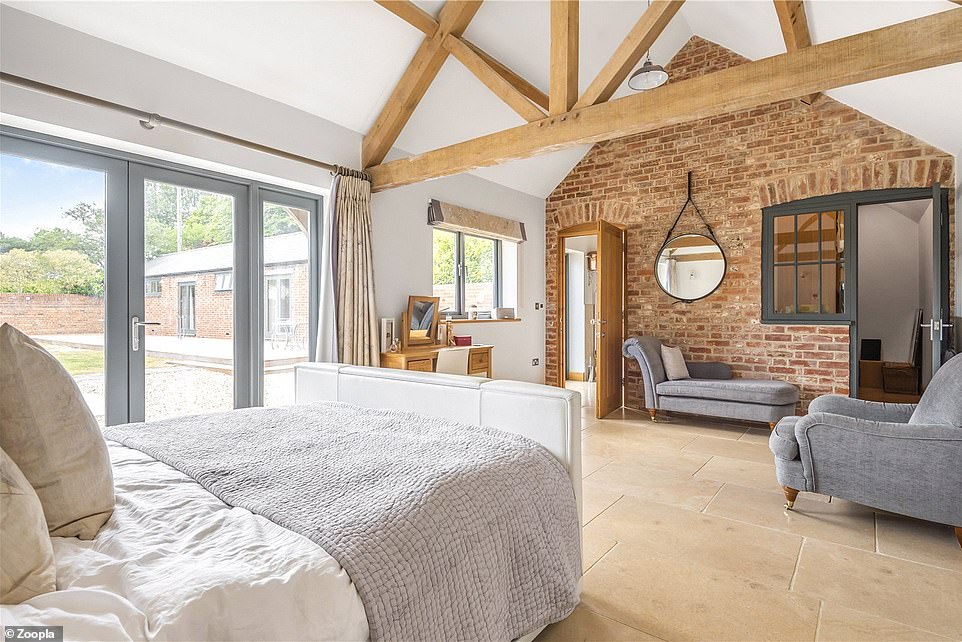 Inside the main bedroom, there is a walk-in wardrobe that took its inspiration from the  1970s children’s TV programme Mr Benn 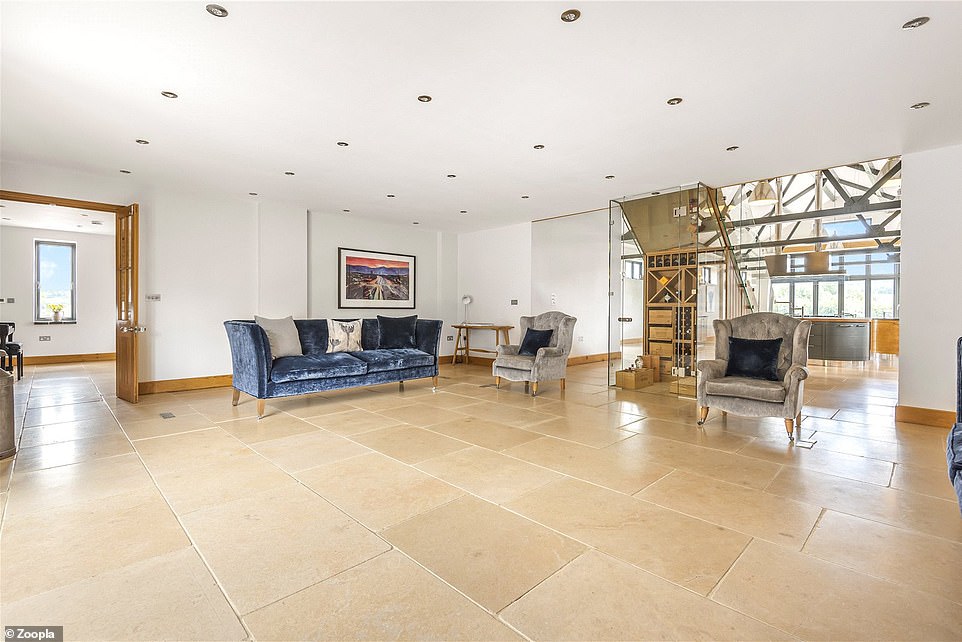 The conversion of the barn provided a lot of space to fill, including this large living area

With his children now at university, it is time for the family to move on.

The property is on the market for offers over £1.9million with Richard James estate agents handling the sale.

Mr Howlett said: ‘I’ve met a new partner who lives in the New Forest, so we are moving to that area. The children have all gone to university and so this is too vast for us. It needs a new family who will take it over.’ 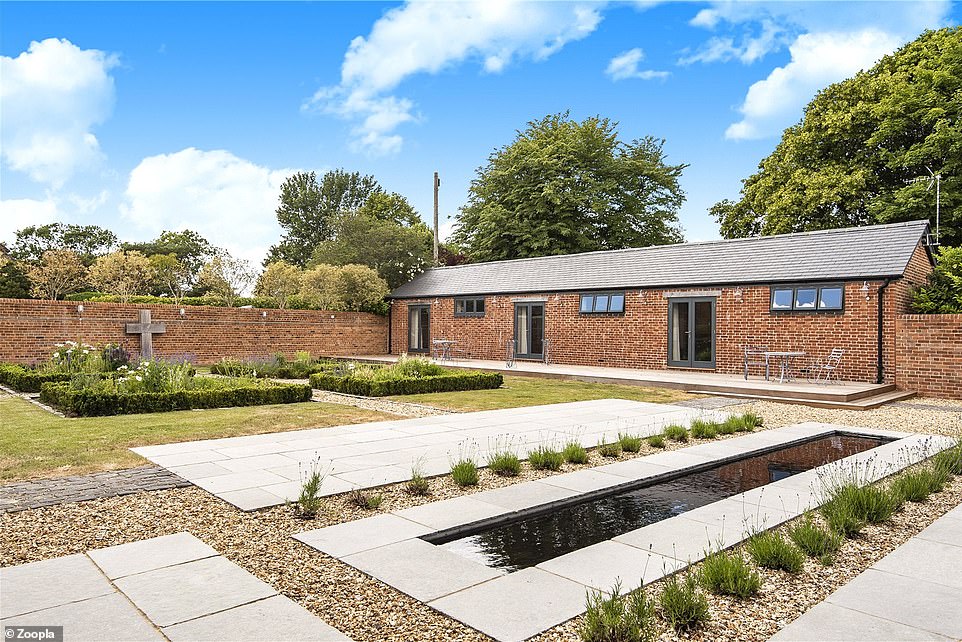 For many, completing such a project while bringing up children and running a recruitment company based in Surrey’s Richmond, would mean they were searching for a quieter life. Perhaps in the shape of a completed house.

But Mr Howlett says he has not been put off doing another build, far from it – although this time he shall be building from scratch to avoid having to deal with a listed building and all the restrictions that go with such a renovation.

There are four bedrooms in the main house at The Long Barn, with a staff flat next to the stables, and two separate guest cottages.

The two cottages are currently rented out until October, having reopened for guests after lockdown on July 4. At their current rate, they are on target to generate an annual income of £40,000. 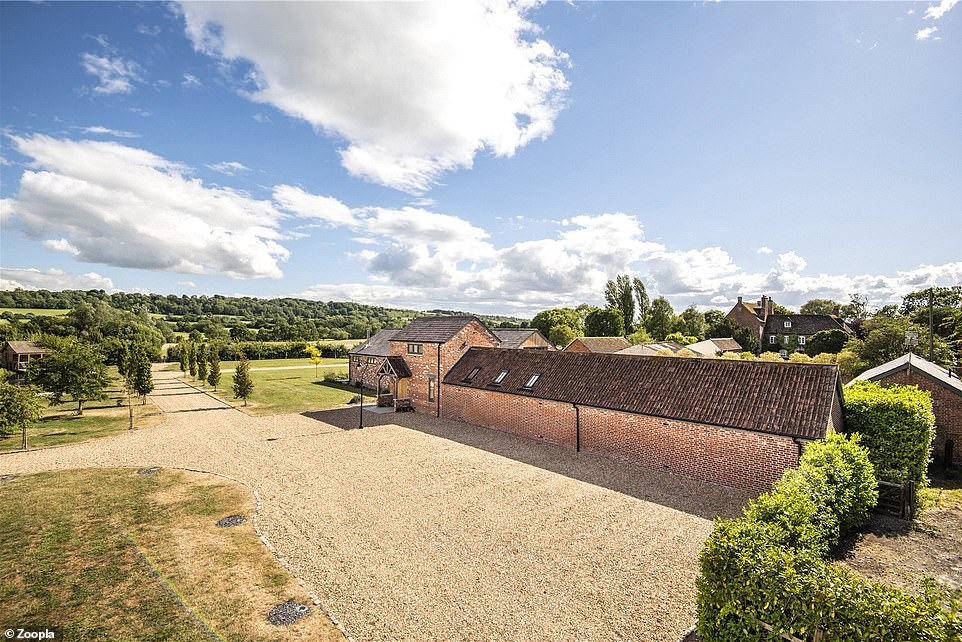 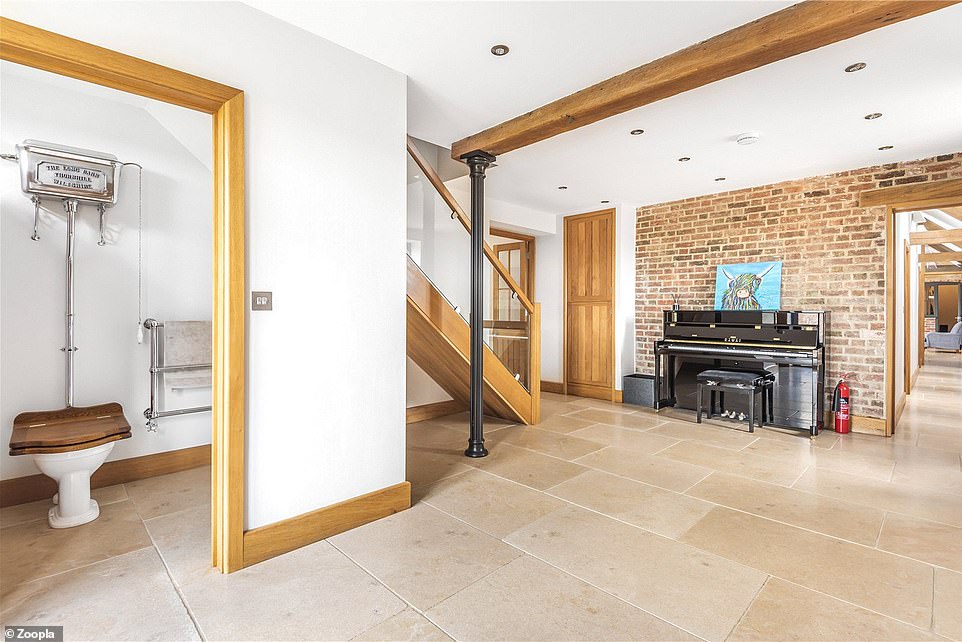 The property is in Thornhill, a village within a short distance of Royal Wooton Bassett.

There is easy access by car to the M4, A419 and Swindon railway station. Local schools include Marlborough College, St Mary’s Calne and Dauntsey’s School in West Lavington.

Alex Hornby, of Richard James estate agents, said: ‘This property is tucked away in the Wiltshire countryside and has plenty of enclosed space.

‘There is plenty of accommodation and entertaining space for your friends and family. You couldn’t wish for much more.’ 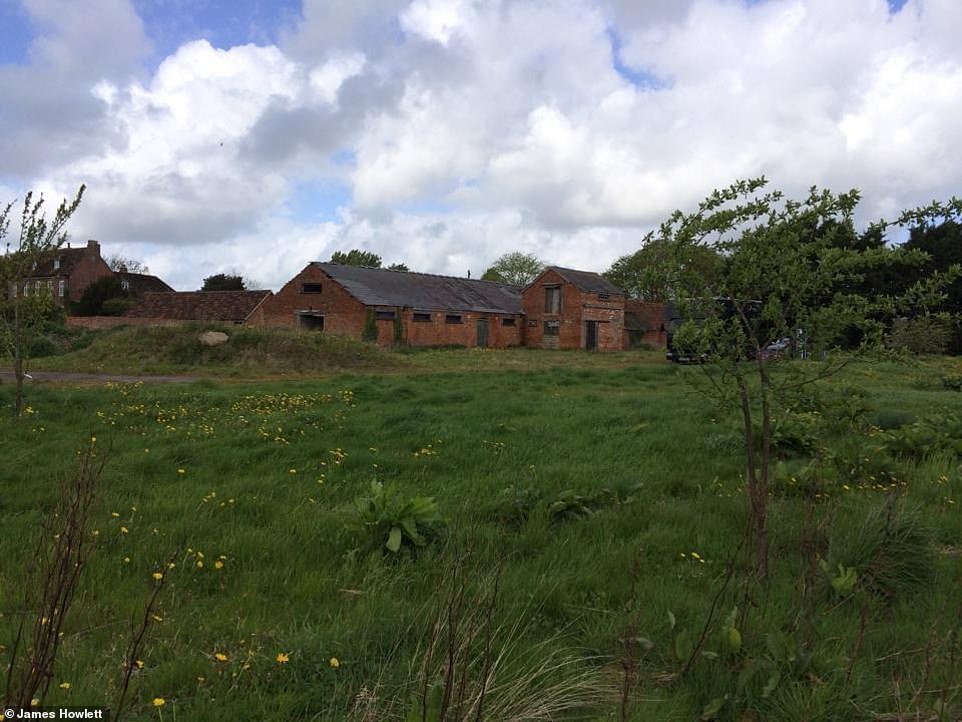 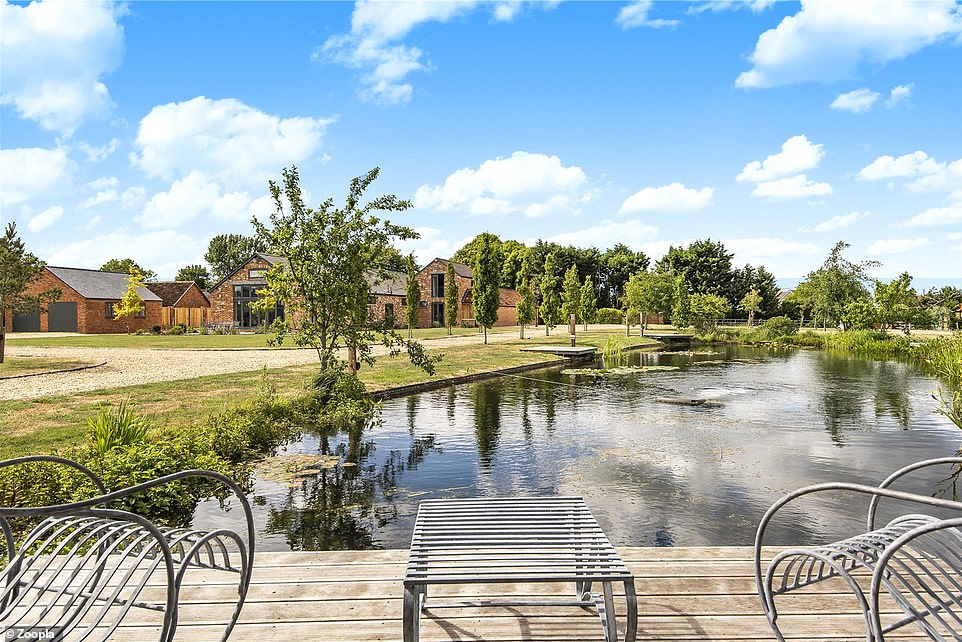 With the children now at university, the owner says it is time for a new family to enjoy the property 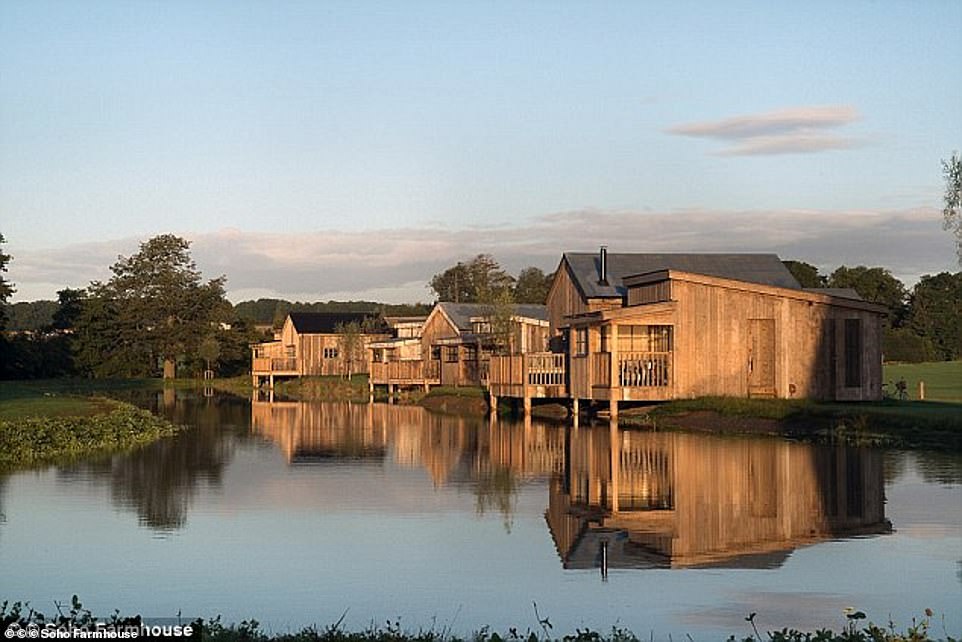 From the outside, The Long Barn has a similar feel to Soho Farmhouse (pictured)

Tom Parker, at Zoopla, said: ‘Lockdown has meant homes with wonderful gardens or swimming pools now come at an even greater premium and for the more discerning buyer space to entertain and separate rooms for guests to stay are an absolute must.

‘Surrounded by water on several sides and with a luxurious yet rustic feel throughout, the Long Barn is the perfect rural sanctuary, combining the practicality of benefiting from a short commute to the city with the joy of the countryside.’