Tony Bennett was hailed by a number of his high-profile musical peers as he turned 94 on Monday.

Stevie Wonder, Elton John, Sting and Billy Joel were among the artists to wish the famed jazz singer a happy birthday via social media.

Bennett’s camp took to Twitter with a picture of the iconic crooner, writing: ‘Happy 94th birthday to Tony Bennett! We would love to share your warm wishes with him today. Feel free to share your message here, and tell us which album you’re playing to celebrate! – Team Tony.’

Birthday wishes: Tony Bennett was hailed by a number of his high-profile musical peers as he turned 94 on Monday. He was snapped last fall in NYC

There was not shortage of birthday blessings for Bennett, the famed voice of classics such as I Left My Heart In San Francisco and Rags To Riches.

‘I’m so happy that you’re here on this planet,’ Wonder said, crediting Bennett for his long-standing support of the civil rights movement.

Elton John tweeted: ‘Happy Birthday @itstonybennett! Thank you for spreading so much joy throughout my lifetime. Sending you all my love – E xx #TheBestIsYetToCome.’ 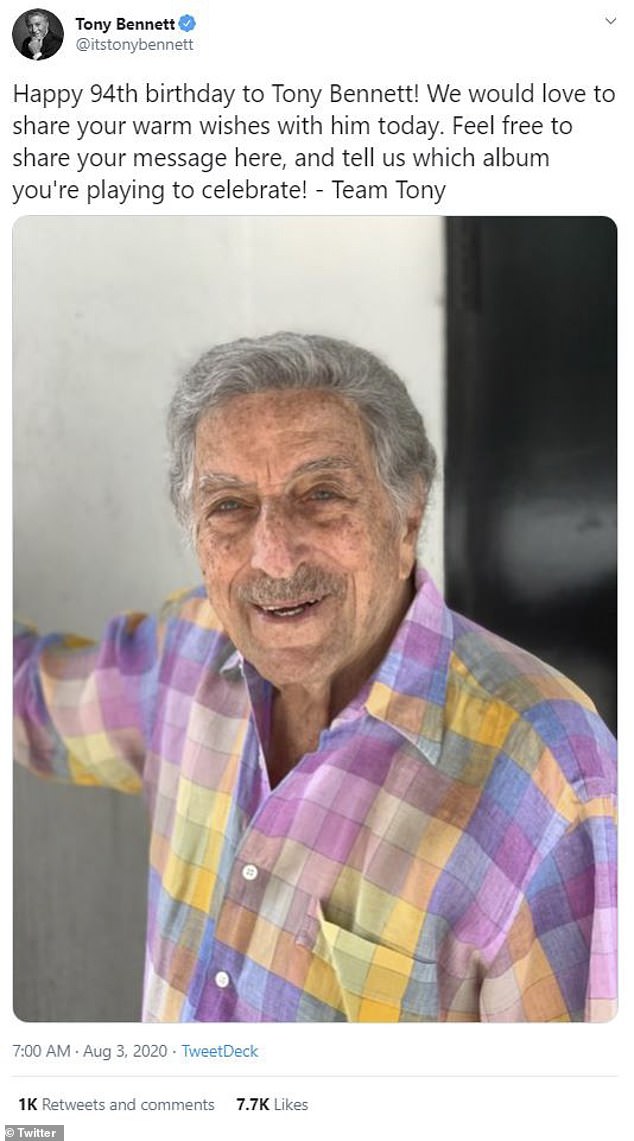 And many more: Bennett’s camp took to Twitter with a picture of the iconic crooner 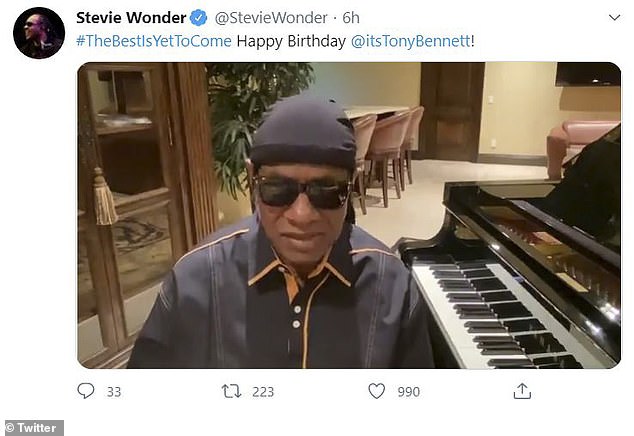 Tribute: Wonder credited Bennett for his long-standing support of the civil rights movement

The Rocket Man singer credited Bennett for his optimism in an accompanying clip.

‘You are an amazing man, an amazing artist and someone we should all look up to,’ John said.

Billy Joel shared a few pictures of them together, writing, ‘To my good friend, @itstonybennett – Thank you for bringing the songs I wrote to such glorious life. Happy Birthday! Love, Billy Joel #TheBestIsYetToCome.’ 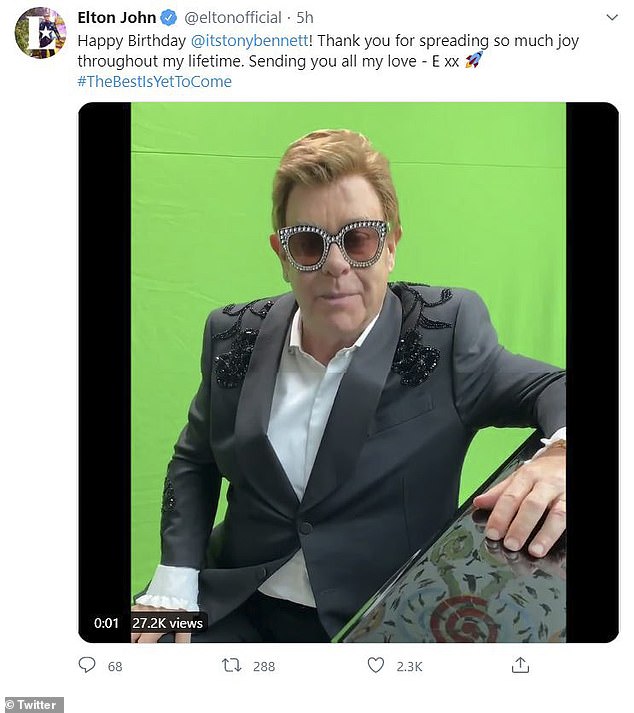 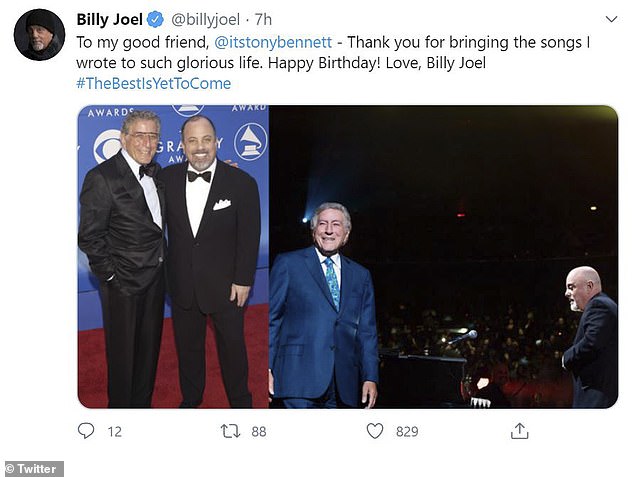 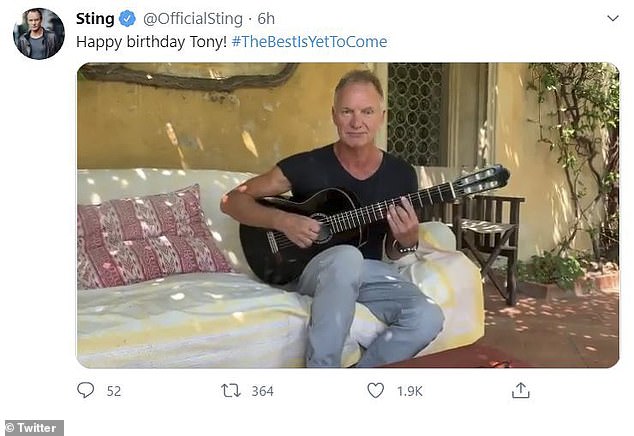 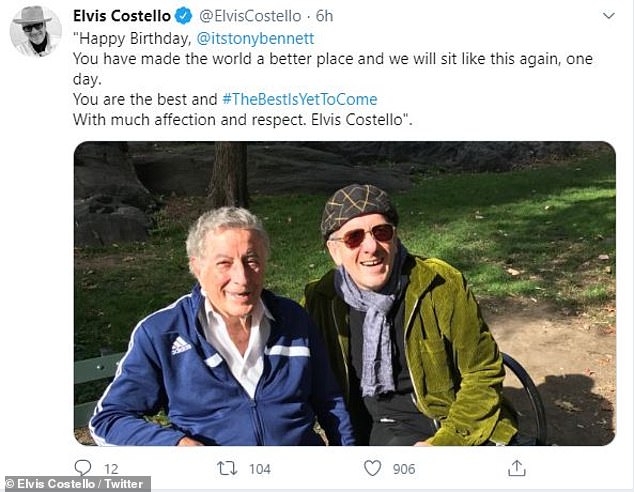 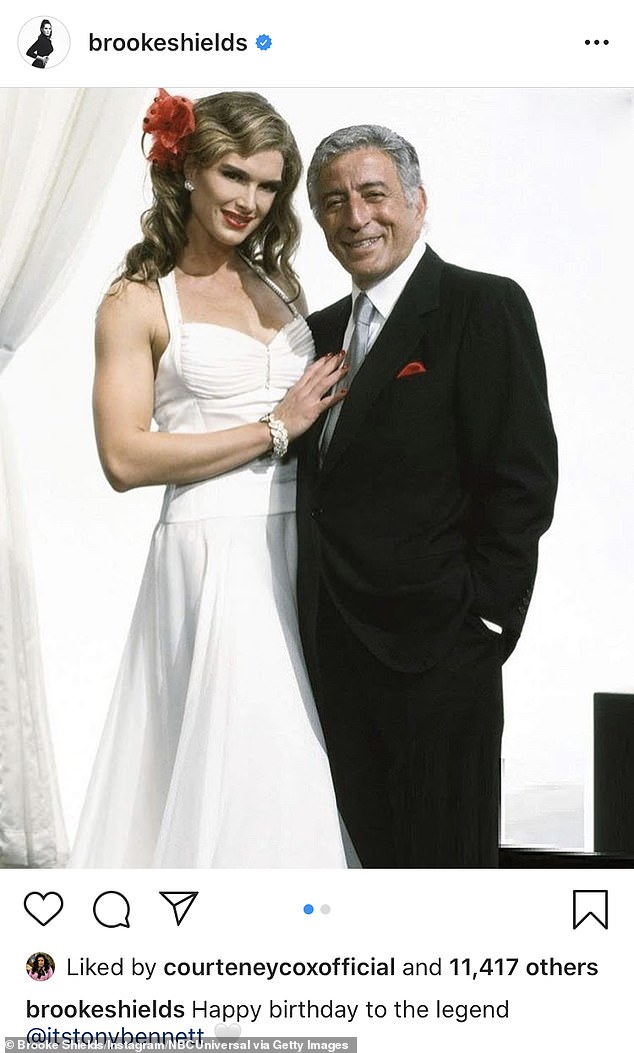 Kind words: Brooke Shields shared a shot of herself and the iconic entertainer

Legendary singer Elvis Costello shared a shot of the pair together on a bench with a kind message for his fellow artist.

“Happy Birthday, @itstonybennett,’ he said. ‘You have made the world a better place and we will sit like this again, one day. You are the best and #TheBestIsYetToCome

With much affection and respect. Elvis Costello.’ 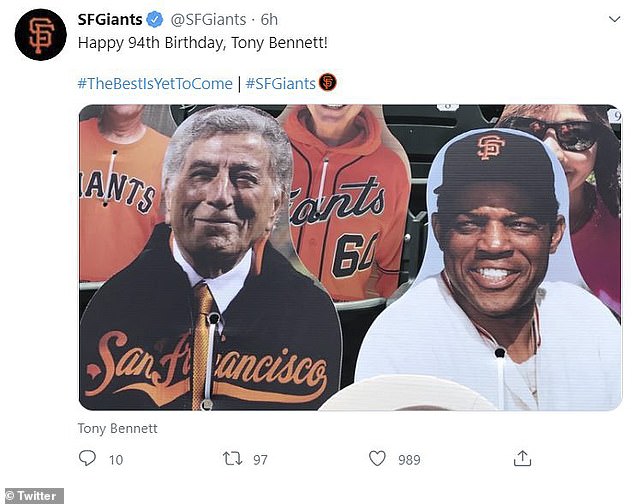 Home run: The San Francisco Giants honored the famed crooner on the day

He told People at the event, which was held at New York City’s Radio City Music Hall, that he was feeling spry marking his milestone birthday.

‘I’m very fortunate,’ he told the magazine. ‘I’m still wide awake! My doctor likes to kick me out of his office and say, “There’s nothing wrong with you – don’t bother me!”‘

Bennett told the outlet he was focused on ‘staying in top shape’ to bring his best to the stage.

‘Usually people are still respected if they show up at 90, but they say, “He’s not like he used to be,” and all that,’ Bennett said. ‘And it’s not happening with me. I still have a lot of energy when I hit the stage, and I feel blessed about the fact that I’m still going strong.’

Bennett, who’s been married to wife Susan Crow, 53, since 2007, said it was ‘a blessing’ to continue to play to sold-out venues