Pizza Express has said it could close around 67 of its UK restaurants, with up to 1,100 jobs at risk, as part of a major restructuring plan.

The chain said it is planning to launch a company voluntary arrangement (CVA) in the ‘near future’ in a bid to push down its rents amid a ‘significantly more challenging environment’ after the coronavirus pandemic.

The outcome has ‘yet to be decided’, Pizza Express said, but it may end in the closure of around 15 per cent of its 449 restaurants in the UK, affecting 1,100 staff.

Pizza Express said it has also hired advisers from Lazard to lead a sale process for the business.

The company added: ‘This decision is a very difficult one; however, against the current unprecedented backdrop, Pizza Express believes reducing the size of its estate will help it to protect 9,000 jobs.’

The company closed all its UK restaurants on March 23 after the Government-mandated lockdown, and has been gradually reopening them since July 9.

The news was revealed on the second day of Chancellor Rishi Sunak’s Eat Out to Help Out scheme, which Pizza Express has signed up to, giving diners 50 per cent off meals out on Mondays to Wednesdays throughout August.

Pizza Express also said it had put itself up for sale after bringing in experts. The sale will be run independently to its other plans and was started today, it revealed.

Separately, it announced plans to sell its business in mainland China and has brought in restructuring experts to help deal with its £735million debts.

UK and Ireland managing director Zoe Bowley said: ‘While the financial restructuring is a positive step forward, at the same time we have had to make some really tough decisions.

‘As a result, it is with a heavy heart that we expect to permanently close a proportion of our restaurants, losing valued team members in the process.

‘This is incredibly sad for our PizzaExpress family and we will do everything we can to support our teams at this time.

‘As we continue to reopen our restaurants for dine-in and delivery, we will successfully navigate the extended period of social distancing expected in the months ahead and, in so doing, protect 9,000 jobs. 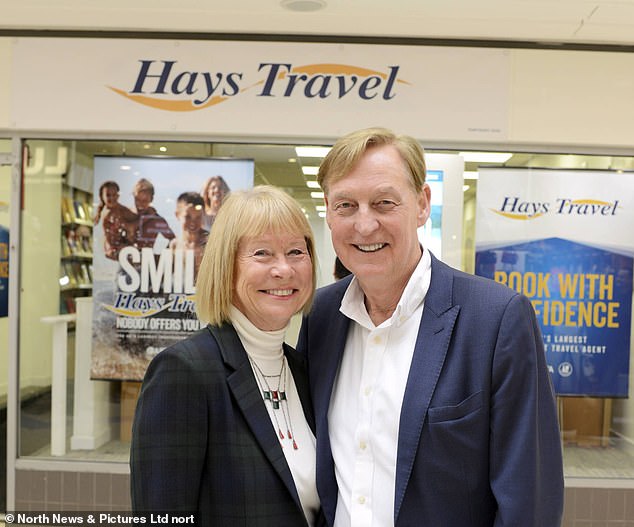 Hays Travel (whose owners John and Irene Hays are pictured) announced yesterday that it is to cut up to 878 jobs out of a total workforce of 4,500 people

‘The initial signs from the restaurants that have been reopened have been very encouraging and we hope that our loyal customers continue to support us now more than ever.’

Andy Pellington, group chief finance officer, said: ‘While we have had to make some very difficult decisions, none of which has been taken lightly, we are confident in the actions being taken to reduce the level of debt, create a more focused business and improve the operational performance, all of which puts us in a much stronger position.

‘We can now plan to invest in both our UK&I and international businesses as well as support our teams as they return to work.’

It comes after Hays Travel announced yesterday that it is to cut up to 878 jobs out of a total workforce of 4,500 people.

The travel company said it has ‘made every possible effort’ to avoid job losses ‘during these extraordinary and distressing times’.

It was ‘on track for recovery’ when the Foreign and Commonwealth Office stopped advising against all non-essential travel in early July, but the recent decision to reintroduce restrictions for people going to Spain ‘triggered the cancellation of hundreds of thousands of holidays’.

Owners John and Irene Hays said: ‘We are devastated that after all of our efforts and the huge investment we’ve made we now face losing some of our valued employees, through no fault of their own.

‘Following the decision to ban travel to Spain and the changes in furlough conditions coming at the same time, we have had no choice.

‘We are also devastated for everyone who may lose their job and we will do all we can in consultations to help them, as we focus on retaining as many people as possible and rebuilding consumer confidence through our renowned friendly and knowledgeable customer service.’

Shadow business minister Lucy Powell said the move was ‘devastating’ and called for targeted support for firms struggling during the pandemic.

‘The Government’s illogical decision to withdraw furlough support from businesses across the board, regardless of sector or circumstance, is putting so many jobs at risk,’ the Labour MP said.

‘With forecasts of a 10 per cent unemployment rate and regular mass redundancies, it is clear the Government must urgently target support where it is needed and protect people’s livelihoods.’

Hays surprised many in October 2019 when it said it was taking charge of all of Thomas Cook’s 555 travel agents across the UK, after the 178-year-old firm went out of business.

This prevented thousands of staff from losing their jobs. Hays said it has had ‘no significant redundancies in its 40-year existence’.

It is consulting with 344 employees who are training as travel consultants and 534 who work in its foreign exchange division.

Rival firm Tui announced last week it is to close nearly a third of its high street stores in the UK and the Ireland because of the coronavirus pandemic and in response to changes in customer behaviour.

It plans to move 70 per cent of the 900 affected jobs to a new ‘home-working sales and service team’.

Last Friday, business leaders warned that Boris Johnson postponing a further easing of England’s coronavirus lockdown was a ‘hammer blow’ to the economy.

The British Chambers of Commerce said businesses and consumer confidence will be damaged again after the Prime Minister warned the UK ‘cannot be complacent’ amid a rise in the Covid-19’s prevalance in communities.

BCC co-executive director Claire Walker said: ‘While tackling the public health emergency must be the priority, these announcements – made at short notice – will be a hammer blow to business and consumer confidence at a time when many firms were just starting to get back on their feet.

‘Businesses communities need as much clarity as possible from government if they are to plan ahead and rebuild their operations in the coming months.

‘Ministers must also consider extending support to all firms, many of whom will be forced to close for an even more prolonged period, as well as targeted measures to help businesses placed under localised lockdowns.’

Also last Friday, Matthew Fell, the Confederation of British Industry’s chief UK policy director, said: ‘This news will come as a real disappointment for some businesses, but firms know that public safety comes first. Businesses will continue to do what is necessary to avoid an infection spike.

‘Delayed reopening will unfortunately lead to even more financial pressure for some companies. So there may yet be a need for more direct support to shore up cash flow, including extended business rates relief.’