Top of the agenda for many big firms across Britain and the world in recent years is to find ways  to help reduce their environmental footprint and become more sustainable.

This has been driven by consumer demand for change and warnings over irreversible damage by large companies, who can make small improvements to help that add up.

One such way is vertical farming and it has seen one middle-class supermarket favourite get involved at some stores.

Marks and Spencer is the latest UK retailer to adapt vertical farming into its stores, with a selection of herbs now freshly grown and harvested in stores across London for shoppers to buy.

It has partnered with Infarm, a fast growing vertical farming firm based in Berlin, that also now operates in other supermarket chains across Europe.

Ocado has also invested £17million in vertical farming while John Lewis plans to grow salads in store in the future in a partnership with LettUs Grow.

Aside from Marks and Spencer, Infarm has recently partnered with the online sustainable supermarket Farmdrop, which stocks a selection of herbs and salad leaves.

It added it will be announcing some new retailers it has teamed up with in the next few months.

Inform also works with a number of chefs in Europe, some of whom have installed farms into their restaurants so they can access the herbs at the freshest point, whenever they want.

In the UK, it supplies produce to Zala Grill in Camden Lock, but it doesn’t have a farm in the restaurant.

Meanwhile, in Germany, Infarm currently has eight restaurants with farms including the Michelin starred Sky Kitchen at Vienna House Andel’s.

How does it work?

Vertical farming works by growing fruits and vegetables in stacked layers that takes place in a controlled environment, often without the use of soil and instead the use of light energy.

Emmanuel Evita, global communications director at Infarm, said: ‘Our approach allows us to be climate independent and grow under any conditions, despite changing climate, extreme weather, or disasters which normally interfere with food production and distribution.

‘Our vertical farms can be installed directly in any urban space, which is where the majority of the global population will live in the next few decades.’

Its plants are also all locally-grown and free of chemical pesticides, making them better for both consumers and the planet.

When the food comes to harvest, it’s just one person in store, moving the produce about a meter from the growing with no machinery, storage or long-distance haulage.

Infarm’s hubs are used to initiate the growth seeds.

Once these seeds have developed to a certain maturity, they are delivered to the in-store farms at retailers, to complete their growth cycle and be offered to the consumer.

The hubs grow seeds across more than 65 combinations of herbs, microgreens and leafy greens and also deliver special varieties, like Peruvian Mint or Wasabi Rucola, directly to chefs for use that day. 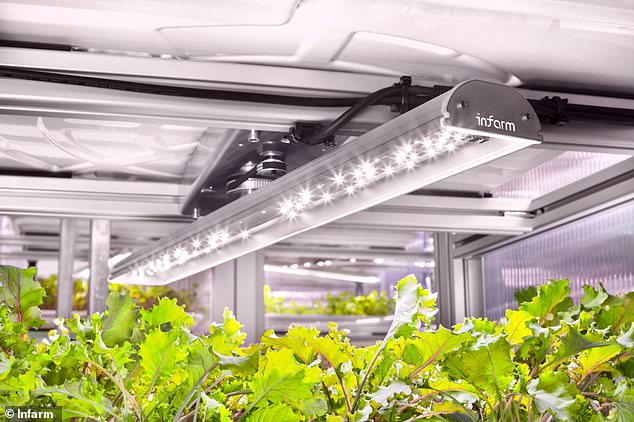 One reason vertical farming can help reduce the ecological waste associated with traditional industrial farming, according to Infarm, is that it uses 95 per cent less water and 75 per cent less fertiliser.

It also uses no chemical pesticides, no genetically modified seeds and says it is able to save 14 litres of water per kilogram of produce.

‘People want to eat the same foods at all times of the year, and this, combined with lengthy transportation routes, and overtaxed soil take a heavy toll not just on the environment but also on the taste and nutrition of what we eat.’

He believes that more retailers are now interested in vertical farming due to the current climate uncertainty.

However, vertical farming is not the cheapest resource out there and has been predicted by some agriculture experts to be three to five times more expensive than traditional farming.

But Infarm say that the product they provide is worth the extra money, especially with the benefits it brings to the environment.

Retailers set the price for the produce Infarm provide in store with M&S currently charging £1.20 for herbs.

It said the price does not tend to be significantly higher than their other produce offerings. 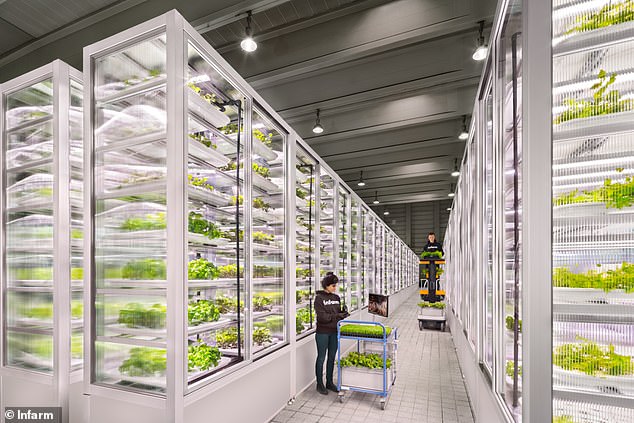 Evita added: ‘We find that in recent years, investors from around the globe have been drawn to innovation that addresses the need for sustainable solutions to the challenges that affect our planet.

‘Certainly these are challenges that many countries and regions are dealing with now, and they are becoming increasingly urgent for all of us.’

Coronavirus has also posed many problems to the vertical farming industry, including the need to implement social distancing measures at hubs, although Infarm said it has been able to keep growing during this period.

It added that the global pandemic has seen increased interest from both investors and consumers in the industry with Infarm clients experiencing a 222 per cent sales growth in the second quarter of this year.

This means the business has more than doubled its employees since June last year.

The future of vertical farming definitely looks bright. Infarm started just under a decade ago and since then, it has grown to more than 700 farms in supermarkets and distribution centres all around the world, allowing it to harvest over 250,000 plants a month and growing.

It is now expanding from just Europe to the United States with Kroger and Canada with Sobeys as well as recently announcing plans to enter Japan and build the first vertical farming network in Asia through a new partnership with Konikuniya.