The British Library has announced it is now ‘reviewing’ its Sir Hans Sloane manuscripts as ‘woke’ activists target one of scores of London landmarks – including the famous Sloane Square – which are named after the pioneering doctor.

The move was revealed in a note on its website, and coincides with a wider review of Sloane’s legacy that saw the British Museum – which he founded – remove his bust from a pedestal and attach the label ‘slave owner’.

The 18th-century philanthropist partly funded his collection of 71,000 artefacts with money from his wife’s sugar plantation in Jamaica, which used slave labour.

A statue of his likeness on Duke of York Square, off the Kings Road, has attracted the ire of protesters.

But today the multi-million pound Cadogan Estate which manages the site on behalf of his descendant, the billionaire Earl Cadogan, resisted calls for the statue to be removed.

They pointed to his astonishing legacy, which included pioneering the smallpox vaccine and the use of quinine to treat malaria. He is also credited with inventing hot chocolate.

The questioning of his legacy could also see campaigns to rename the scores of streets that memorialise him – many of which are located on the Cadogan Estate.

As well as the British Museum, Sloane also founded the Natural History Museum, the Foundling Hospital and the Chelsea Physic Garden. All these sites include references to Sloane that could now come under threat.

Another target could be the famous Sloane Square and its well-heeled denizens… nicknamed Sloane Rangers, of which Princess Diana was considered to be an archetype.

Sir Hans Sloane’s huge legacy includes a series of street names on land still owned by his descendant, the billionaire Earl Cadogan, and the Chelsea Physic Garden, which he helped create 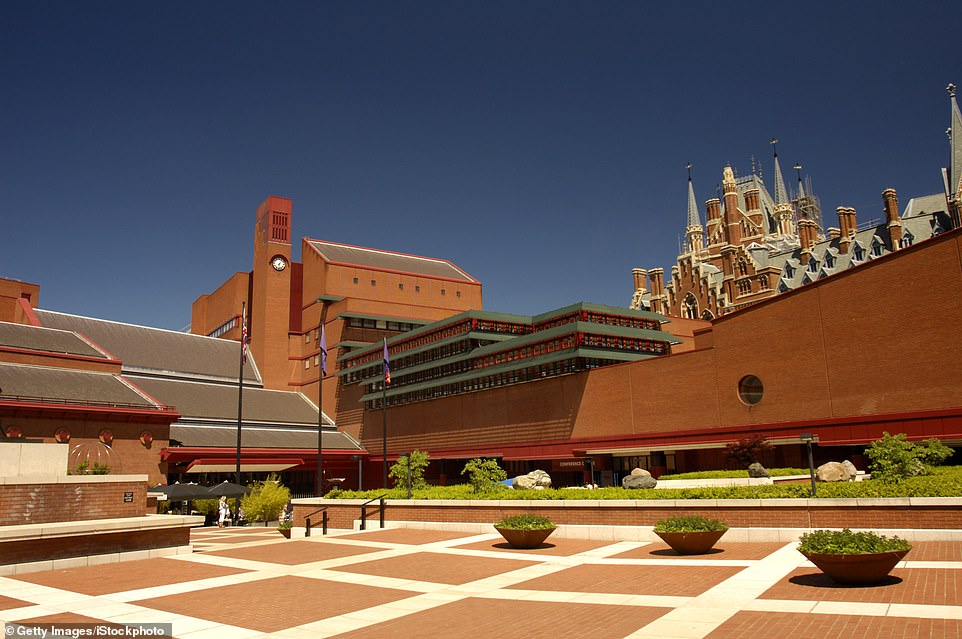 The British Library’s move was revealed in a note on its website, and coincides with a wider review of Sloane’s legacy that saw the British Museum – which he founded – remove his bust from a pedestal and attach the label ‘slave owner’ 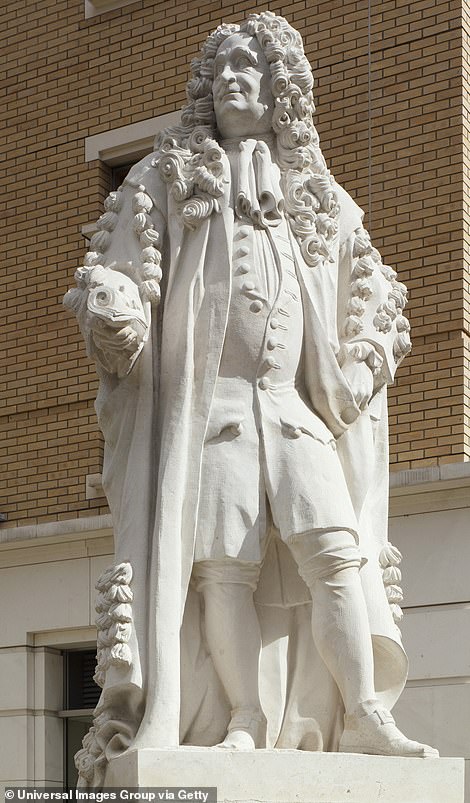 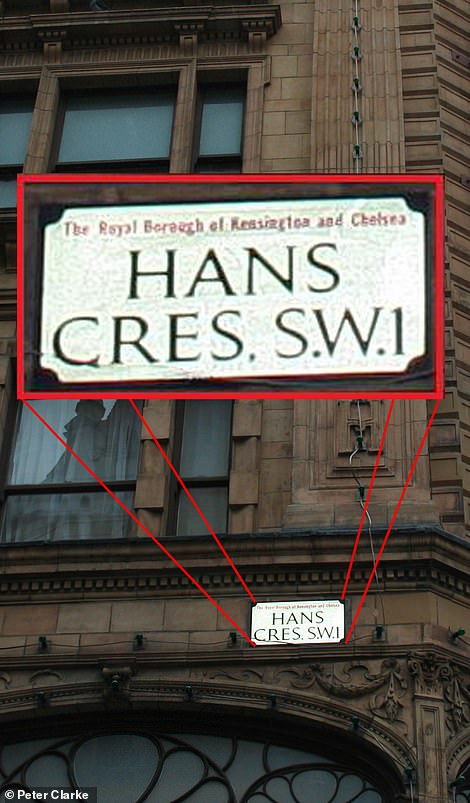 The British Museum, the Foundling Hospital (now the children’s charity Coram – which includes a room named after Sloane),  the Chelsea Physic Garden, the Natural History Museum.

Sloane’s descendant, Earl Cadogan, has a seat in the House of Lords and still owns swathes of some of the most exclusive real estate in London as part of his inheritance.

Much of this land is named after the eminent physician and collector, including Sloane Street, Sloane Avenue, Sloane Terrace, and a network of three streets bearing his first name, Hans.

There is also a statue of Sloane on Duke of York Square, an exclusive shopping, dining and residential complex off the Kings Road that sits at the heart of the 300-year-old Cadogan Estate.

The statue attracted a petition in favour of its removal which led to a minor protest on Friday, prompting a counter petition.

This reached 1,300 signatures in a matter of days – whereas the one in favour of toppling took months to hit the same figure.

Today the Cadogan Estate resisted calls to remove the monument, explaining that they understood his controversial legacy but believed removing the monument would ‘achieve nothing’.

Sloane also helped to found the Natural History Museum – which displays some of his artefacts as part of the Sloane collection – and the Chelsea Physic Garden, which has a statue of him.

A spokesman told MailOnline today that it would not rename the collection.

Richard Bingley, from campaign group Save Our Statues, today called for Sloane’s legacy to be protected.

He told MailOnline: ‘We are now potentially looking at a domino effect whereby our statues and cultural memorials will fall.

‘Calls to remove the Sloane statue at Duke of York square reflect that the ‘genie is out of the bottle’ and perhaps Boris Johnson’s biggest challenge will be to put the lid firmly and politely back on.’ 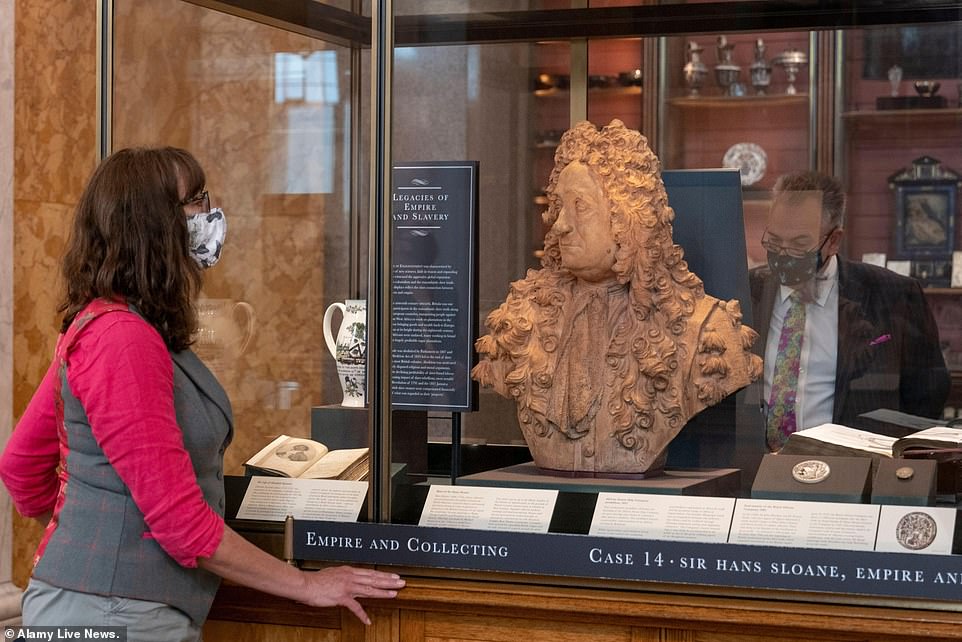 Sloane’s bust has been removed from its pedestal in the British Museum and is now kept in a separate display case, where he is labelled a ‘slave owner’

However, historian and broadcaster David Olusoga suggested it was right to challenge aspects of Sloane’s legacy.

Discussing the British Museum’s decision to move the bust, he told BBC Radio 4’s Today Programme: ‘Very often with these busts and statues the problem is the pedestal. The pedestal means affirmation, it means validation. It means heroisation of the person and their actions. 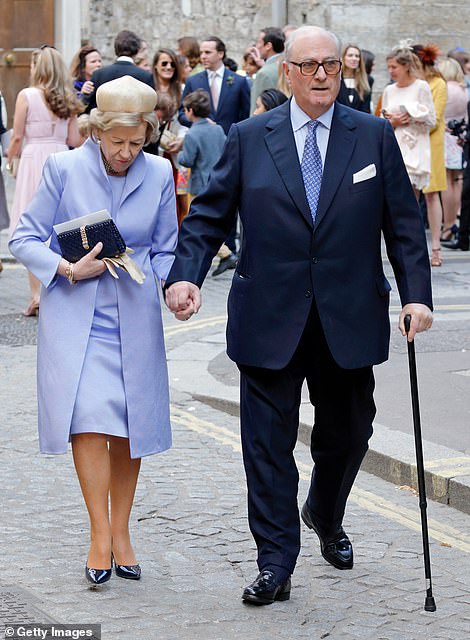 Sloane’s billionaire descendant Charles Cadogan, the 8th Earl Cadogan, at a wedding in London in 2016

‘When people talk about toppling statues what they mean is removing them from that position on a pedestal that says this was a great and good man and we should not question them.

‘They should be on display, Hans Sloane is a historic figure, but is he really somebody in all aspects of his life that we went to celebrate and validate? I think it’s a really useful step forward.’

Sloane’s vast collections are a testament to his extraordinary life as one of the driving forces of the British Enlightenment, which saw him interact with esteemed figures including Sir Isaac Newton, Robert Hooke and the philosopher John Locke.

Cadogan Estates said: ‘Sir Hans Sloane achieved many great things in his life, being a noted intellectual, benefactor and philanthropist, he helped found the British Museum, the Natural History Museum, the Foundling Hospital, the Chelsea Physic Garden and promoting an early form of vaccination for smallpox – all of which helped advance our understanding of the wider world.

‘But we recognise that he benefited from profits made from enslaved people, which we do not condone or excuse. We are aware of the British Museum’s decision to reposition his bust.

‘We do not believe that removing the statue from Duke of York Square will help our understanding of the past or improve the area and believe that Sir Hans should be assessed in his proper historical context and are actively considering how to contextualise the statue. We are also engaging with the Commission for Diversity in the Public Realm and will await their recommendations.’

MailOnline has also contacted the Natural History Museum, the Chelsea Physic Garden and Coram for comment. 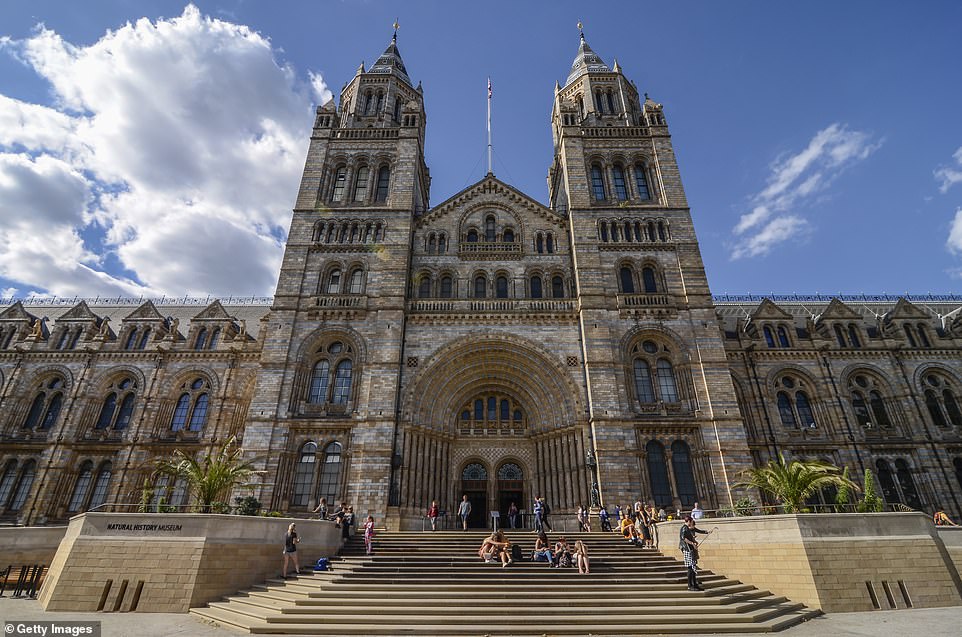 The Natural History Museum in South Kensington includes a Sloane collection. He amassed 71,000 objects throughout his lifetime

Sir Hans Sloane: Enlightenment physician and collector who pioneered the use of quinine for malaria, jabs for smallpox, and drinking hot chocolate – but who earned a fortune from his wife’s sugar plantation 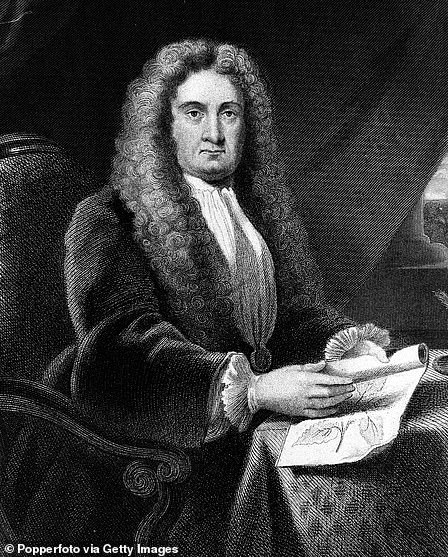 Sir Hans Sloane was one of the most influential figures of the 18th-century British Enlightenment who left a huge legacy that continues to influence the country today.

He was born in Killyleagh, Ulster in 1660 to a relatively modest family, who had arrived in the province as immigrants from Ayrshire in Scotland.

He studied medicine and botany in London, Paris and Montpellier before moving to London and setting up a medical practice at 3 Bloomsbury Place in 1689.

Sloane’s reputation quickly grew and he amassed a list of wealthy and influential patients including Queen Anne and Kings George I and II.

He pioneered the use of quinine for malaria and inoculations for smallpox, while also promoting the supposed health-giving properties of drinking chocolate mixed with milk.

His career as a collector began in 1687 when he left for Jamaica as physician to the colony’s governor, the Duke of Albermarle.

Sloane was linked to the slave trade by his work as a doctor on slave plantations.

He also married Elizabeth Langley Rose, an heiress to sugar plantations in Jamaica, meaning that slavery contributed greatly to his fortune and his ability to build up a substantial collection of cultural and natural artefacts.

By his death in 1753 he had collected more than 71,000 items, which are now spread across the British Museum, British Library and the Natural History Museum.

His vast collections are a testament to his extraordinary life as one of the driving forces of the British Enlightenment, which saw him interact with esteemed figures including Sir Isaac Newton, Robert Hooke and the philosopher John Locke.

He is commemorated in a series of place names on land that is still owned by his descendants, the Cadogan family. He is buried at Chelsea Old Church. 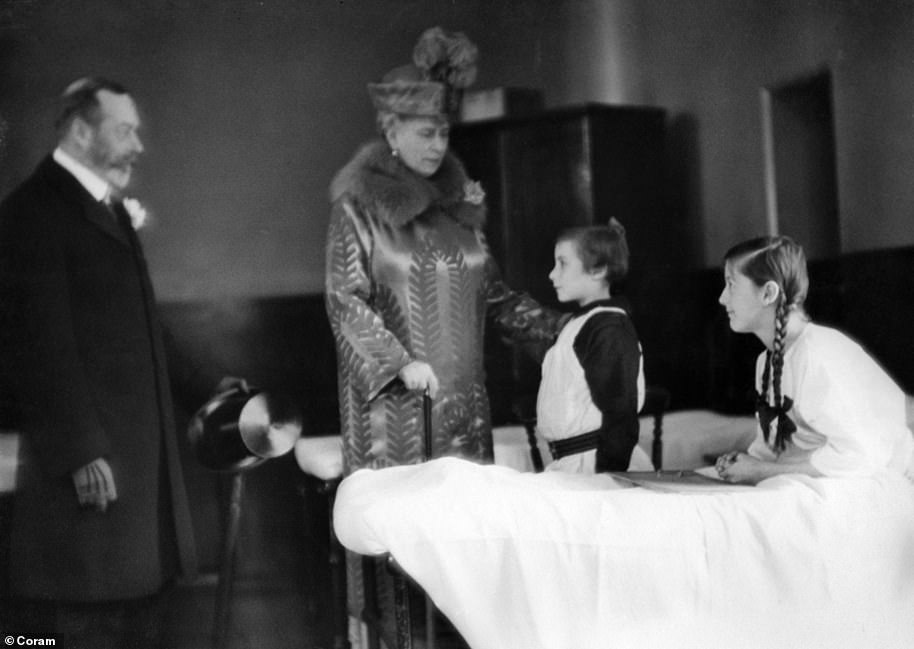 Among Sloane’s legacy was creating the Foundling Hospital, which King George V and his wife Mary, the Queen’s grandparents, are seen visiting. This is now the children’s charity Coram

SARAH VINE: Look out, Sloanes – the Wokesters are coming for you!

One of my least favourite questions to be asked — usually at dull political fundraisers where the conversation is as dry as the beef — is: if I could go back in time and eliminate one person from history, who would it be?

Luckily the whole exercise is just a stupid parlour game. Or it was. Because lately some people — rather a lot in fact — are playing it for real.

The latest bete noire is 17th century Irish physician, naturalist and collector Sir Hans Sloane. Born in 1660, he lived through an age of great scientific, intellectual and artistic expansion.

He has been denounced, Cultural Revolution style, by the British Museum (which he founded), and his bewigged effigy removed from its plinth. His crime? Like virtually every other nobleman of his age, he owned slaves. Henceforth he is to be housed along with other common-or-garden artefacts in a display that explains his legacy in the ‘exploitative context of the British Empire’. 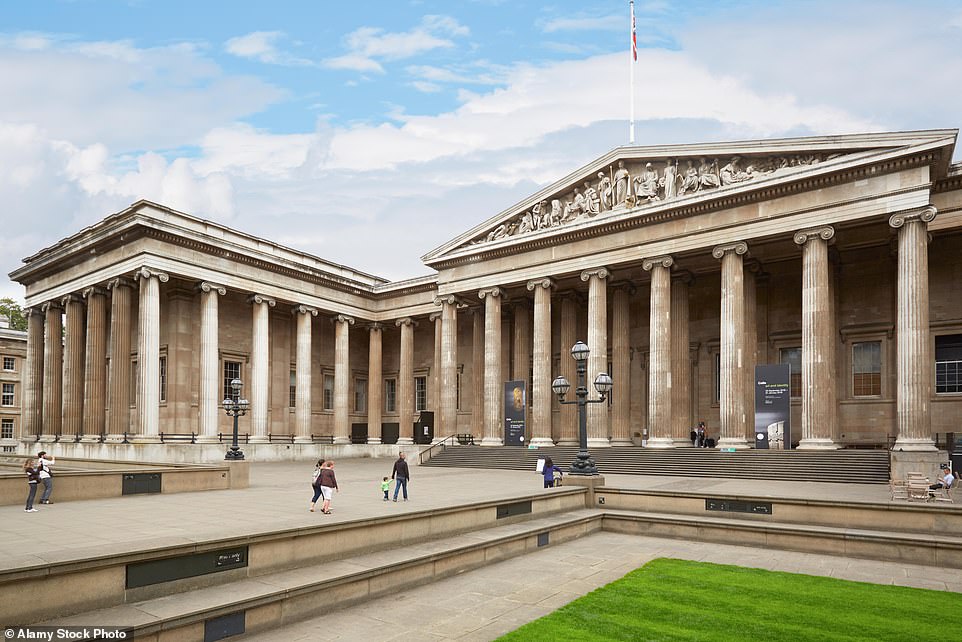 Without Sloane we would not have the British Museum (pictured), nor the British Library, the Natural History Museum, Chelsea Physic Garden, hot chocolate — or even one of the more entertaining features of the 20th century, the Sloane Ranger

Without Sloane we would not have the British Museum, nor the British Library, the Natural History Museum, Chelsea Physic Garden, hot chocolate — or even one of the more entertaining features of the 20th century, the Sloane Ranger.

Indeed, if we’re really going to cancel everything Sloane then presumably Alice bands, red trousers, Barbour jackets and point to points must henceforth all be consigned to the Orwellian black hole, together with pearl earrings and, of course, blue mascara.

The director of the Museum, Hartwig Fischer, explained that the move is part of wider measures to ensure its treasures are seen in the context of colonialism.

The aim, he asserts, is to ‘rewrite our shared, complicated and, at times, very painful history’.

No one is denying the history of the British Empire is inextricably linked to the slave trade. It is an unpleasant and indelible stain on our nation, and it is one that we must all reflect upon. But it is nevertheless just a stain. It is not the whole tapestry.

It is this broader picture, as people have been toppling the statues of similar historical figures in towns and universities across Britain over recent months, that we seem to be ignoring. And people like Mr Fischer — who seem more interested in furthering their personal goals than making the case for the rich and nuanced history of the institutions they represent — are guilty of the worst kind of intellectual cowardice.

The cancel culture sweeping the nation is not about materially improving the lives of the oppressed.

It’s about an intellectual fearfulness now sadly embedded across almost all our institutions — from the Civil Service to the Scouts — that has neither the courage nor the sophistication to resist the zombified armies of the woke whose righteous indignation and evangelical fervour makes them blind to the ambiguities of humanity and human history.

So to depose Sloane — or for that matter George Washington or any slave-owning figures of the past — serves no purpose, no real, practical purpose, other than to play to the gallery.

Yes, it is part of our past — but it is only one aspect of that past.

There are countless others — not least the fact that our Parliament abolished the slave trade long before many other nations — that, at least to my mind, tips the balance in our favour. 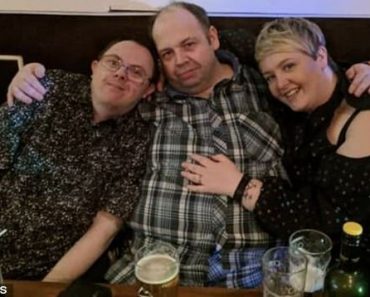 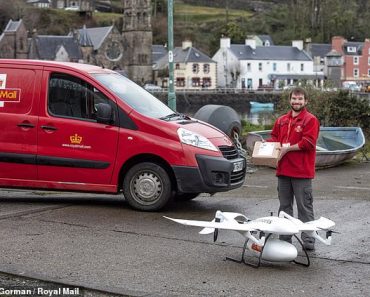 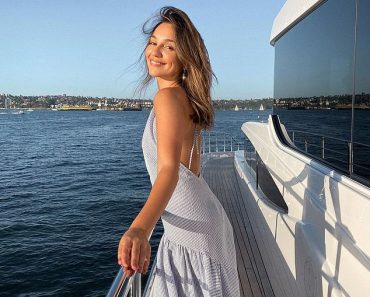 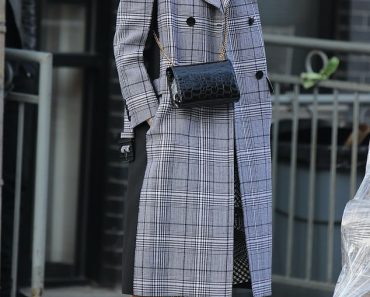 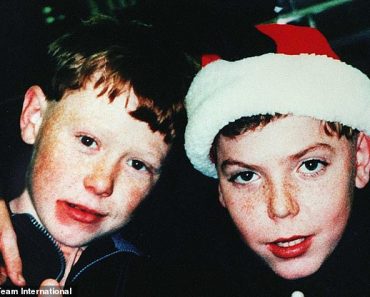