Katharine McPhee and her husband David Foster were in the mood for socializing on Friday when they met up with Rebel Wilson and her date.

The 36-year-old Smash star and her 70-year-old husband joined the 40-year-old Cats actress for dinner outdoors in Hollywood.

Katharine looked glamorous in a little black dress, which she covered up with a tan plaid blazer.

Coupled up: Katharine McPhee, 36, enjoyed a double date on Friday in Hollywood with her husband David Foster, 70, the actress Rebel Wilson, 40, and her masked date

The former American Idol contestant also wore a comfortable pair of flats and carried a black handbag with a thick gold chain.

Rebel matched her in a sleeveless black dress with ruffles at her shoulders, and her date showed up in a black shirt and matching black blazer.

David contrasted his navy blazer and an untucked white dress shirt with amore casual pair of jeans and white sneakers with red trim. 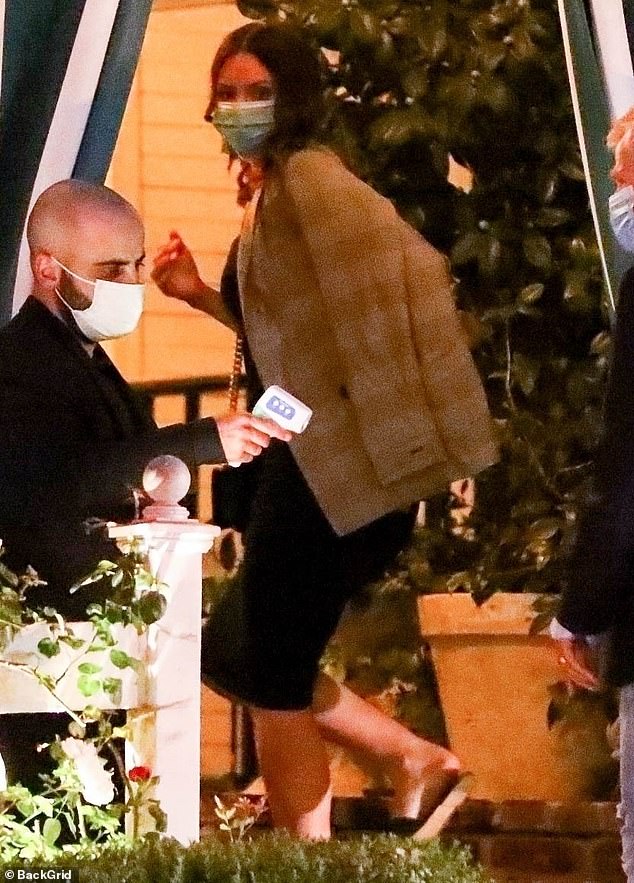 Back in black: Katharine wore a sleek black dress with a tan plaid blazer draped over her shoulders. Rebel matched her with a sleeveless black dress

All of the guests were masks to dinner to help slow the spread of the novel coronavirus.

Katharine made headlines in August when sources claimed to Us Weekly that she hopes to have a child with her senior husband.

The couple, who married in London in June 2019, are ‘definitely trying’ for a baby, the sources said. 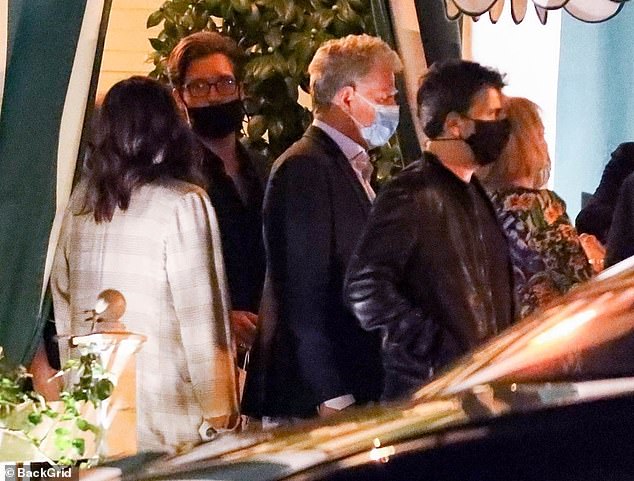 Taking their time: The couple’s chatted with other friends outside the restaurants outdoor tent before heading on their way

Following their dinner, David stopped to chat with a couple outside before moving on.

The actress shared a photo of a masked table read with the cast on Thursday, captioning it, ‘and we’re back!’

Another photo showed a monitor on set capturing her breaking into laughter with her costar Eddie Cibrian.

The two were announced to star in the series in January, but production was halted in March due to the coronavirus pandemic. 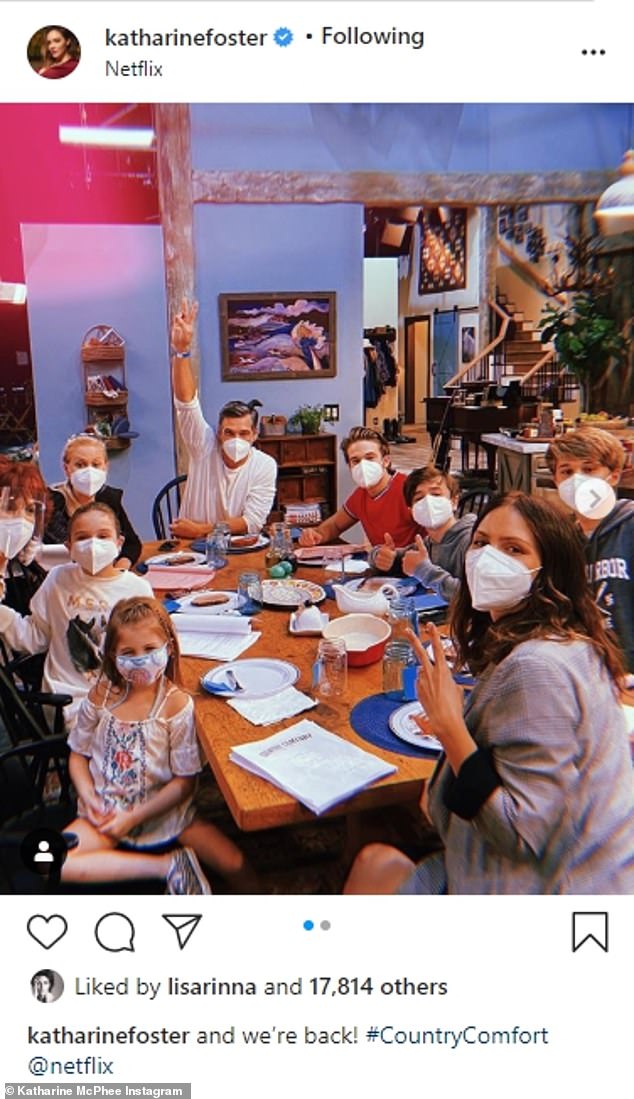 Back at it: On Thursday, Katharine revealed she was back on the set of her Netflix comedy series Country Comfort, which was announced in January and delayed in March due to the pandemic

The multi-camera comedy was created by The Nanny’s executive producer Caryn Lucas and shares a similar premise to the Fran Drescher series, though it’s not a reboot.

Katharine plays a young country singer who takes up a job as a nanny after her singing career experiences a setback.

She starts working for a cowboy named Beau (Cibrian) who needs help raising his five children, but she soon finds a way to restart her music career after learning the whole family is musically gifted.

Netflix hasn’t yet announced a release date for the comedy series. 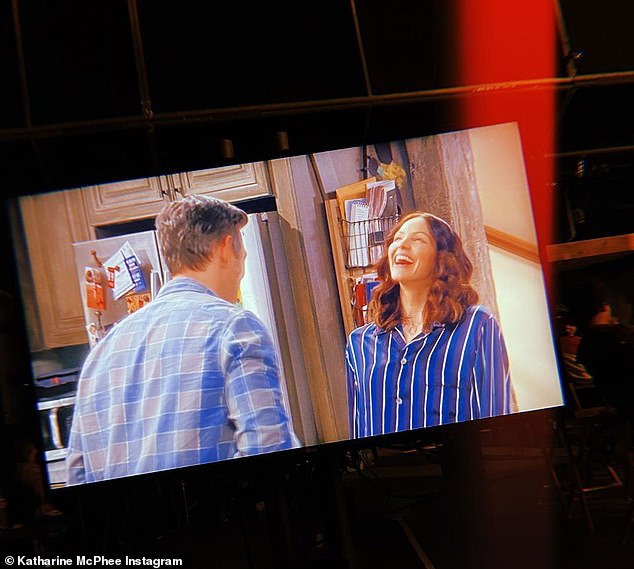 Starting over: The series is similar to The Nanny and stars Katharine as a country singer who resorts to being a nanny for a cowboy and his five children after her career craters

Her friend Rebel Wilson also has her own TV project coming up, though it’ll be considerably shorter.

The Pitch Perfect star is set to appear on the upcoming second season of the revived Who Wants To Be A Millionaire, with Jimmy Kimmel hosting.

She’ll join other celebrity guests including Modern Family’s Julie Bowman, Ray Romano and Tiffany Haddish, and one of the four will win the million-dollar prize.

The Jojo Rabbit actress showed off her stunning weight loss and her newly trim figure in a navy blue dress while posing with her friend Jacon Andreou, a vice president at Snapchat. 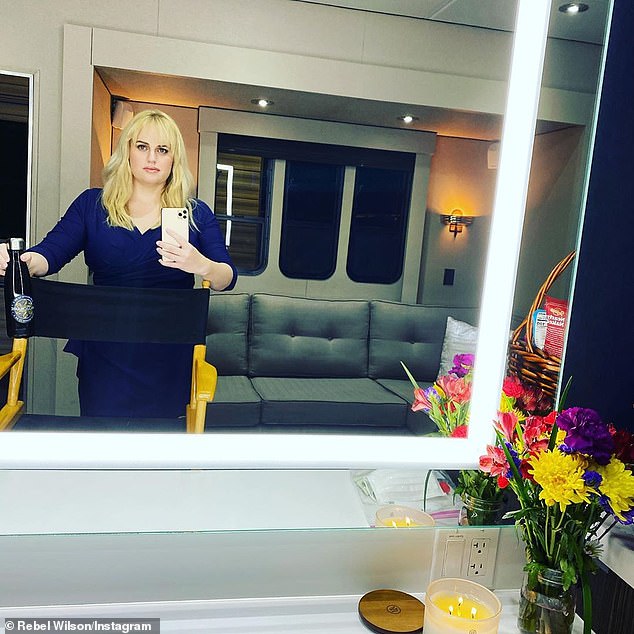 Coming soon: Rebel posted to Instagram on Friday about her upcoming appearance on the rebooted Who Wants To Be A Millionaire, hosted by Jimmy Kimmel

So far, Rebel has lost at least 40lbs toward achieving her goal weight of 165lbs.

She shared some photos of herself in the mirror while Jack was getting made-up ahead of his appearance on the show.

‘Can’t reveal too much but catch me and my “smartest friend” @jacobandreou on Who Wants To Be A Millionaire with @jimmykimmel raising money for @schoolofstjude,’ she captioned the green room photos and a video.

The organization she was supporting, The School of St. Jude, offers completely free education to 1800 of the poorest students living in Arusha, Tanzania.

The new season of Who Wants To Be A Millionaire will begin airing on October 18 on ABC. 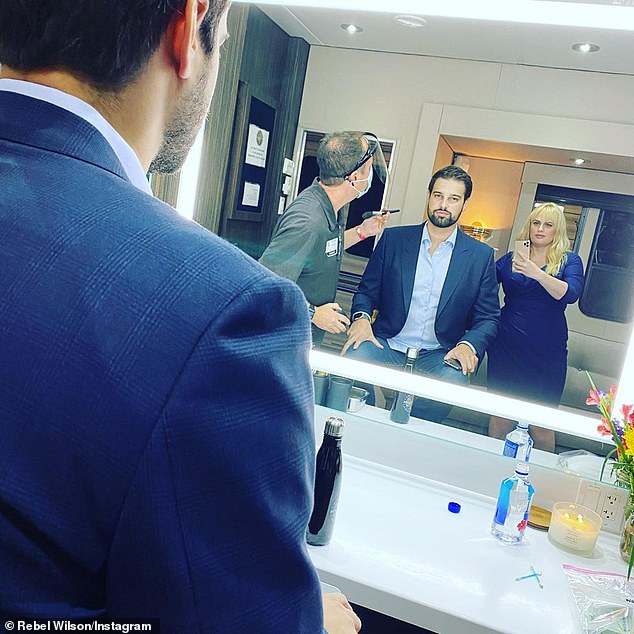 Behind the scenes: She showed off her phenomenal weight in a navy dress while backstage with her friend Jack Andreou, a VP at Snapchat, was getting made-up 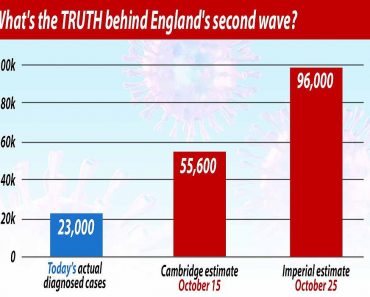