Pete Evans’ new Evolve Health Labs has been the source of immense speculation, and derision, before it even opened its doors.

During my recent trip to Byron Bay, I visited Pete’s new facility located in the Habitat Lifestyle Precinct on Bayshore Drive.

The brand new clinic has a cryotherapy chamber, a hyperbaric treatment chamber, a room for localised cryo treatments, and another for red light therapy.

Two years ago, I would have been writing a review on a delicious paleo dish by the former MKR judge, but now I’m volunteering to be a guinea pig of Pete Evans’ newest passion – ‘a new era wellbeing centre providing holistic treatments’.

On arrival, the spacious foyer had a large Evolve sign with Pete’s name below it.

Elsewhere, on shelves with crystals, Pete’s famous face and name were on products and books for sale. 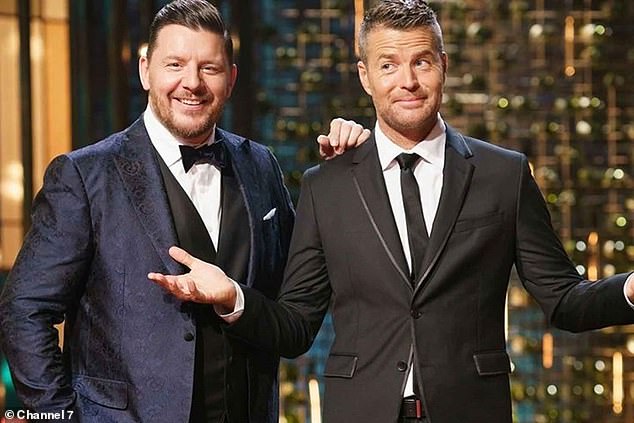 The axed My Kitchen Rules judge has turned his efforts and passion from cooking towards promoting wellbeing , alternative medicine and holistic treatments. Pictured: Manu Feildel and Pete Evans 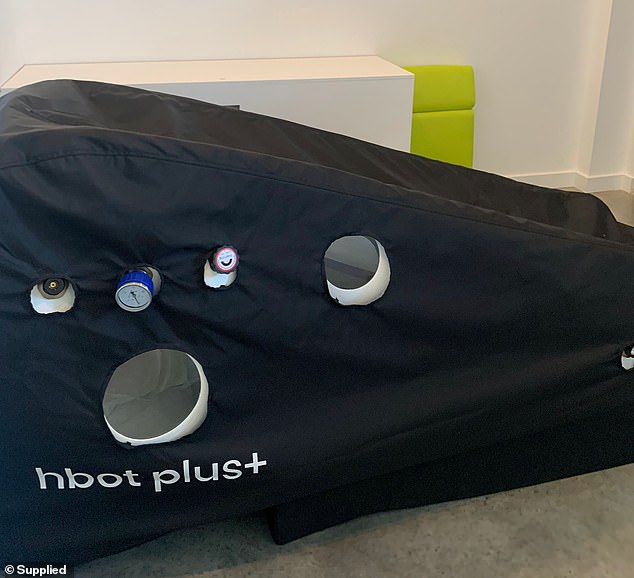 Pete’s brand new clinic has a cryotherapy chamber, a hyperbaric treatment chamber (pictured- HBOT), a room for localised cryo treatments, and another for red light therapy

As I’d previously used a cryo chamber in Sydney to successfully aid in my recovery time while training for a half marathon in 2018, I focused my attention on the procedure I hadn’t seen or tried before – Hyperbaric Oxygen Therapy (HBOT).

The sci-fi sounding name already made me feel nervous, and seeing the chamber didn’t do much to calm them: it’s basically a tent with multiple tubes that attach to a machine with pressure gauges and intense-looking buttons.

It’s the only treatment on Evolve’s new website that doesn’t have an in-depth explanation of its desired outcomes. It states: ‘Hyperbaric treatments gently place the body under increased pressure in an oxygen-saturated environment. This treatment method is used worldwide by many leading health professionals.’ 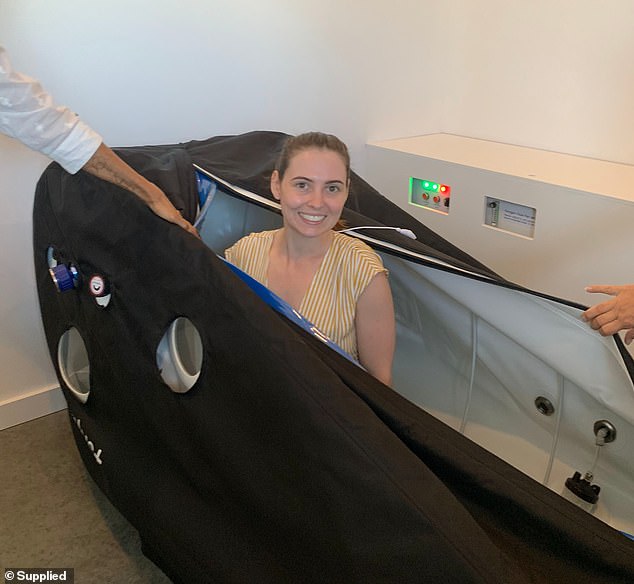 Going in: Hyperbaric oxygen therapy allegedly increases the amount of oxygen a person’s blood can carry. A constant air pressure is maintained in Evolve’s mild chamber (similar to below sea level conditions) as near-pure 100% oxygen is administered via a mask 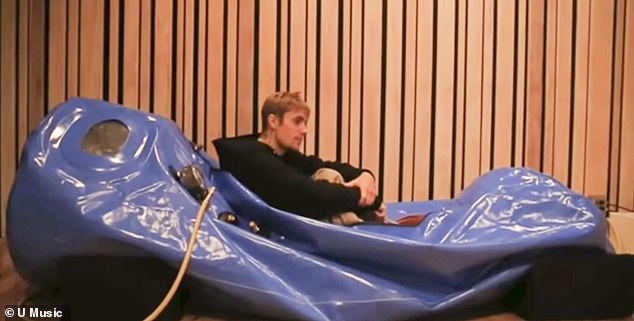 ‘You get more oxygen to your brain so it decreases your stress levels’: Canadian singer Justin Bieber (pictured) an at-home hyperbaric chamber that he claims helps reduce his anxiety

When asking what benefits I may achieve from the experience, the staff were reluctant to give me specific, guaranteed benefits, instead vaguely assuring me that the benefits were wide ranging. In my own independent research it has been linked to temporarily restoring normal levels of blood gases and tissue function to promote healing and fight infection. It’s also favoured by many celebrities, such as singer Justin Bieber, Olympic swimmer Michael Phelps and the late Michael Jackson.

Hyperbaric oxygen therapy allegedly increases the amount of oxygen a person’s blood can carry. A constant air pressure is maintained in Evolve’s mild chamber (similar to below sea level conditions) as near-pure 100% oxygen is administered via a mask.

I signed a waiver acknowledging the potential temporary and permanent side effects (oxygen poisoning/toxicity, middle ear injuries and changes in vision are a few listed) before stepping into the deflated chamber with an oxygen mask securely fitted over my face. The technician zipped me in before inflating the capsule. 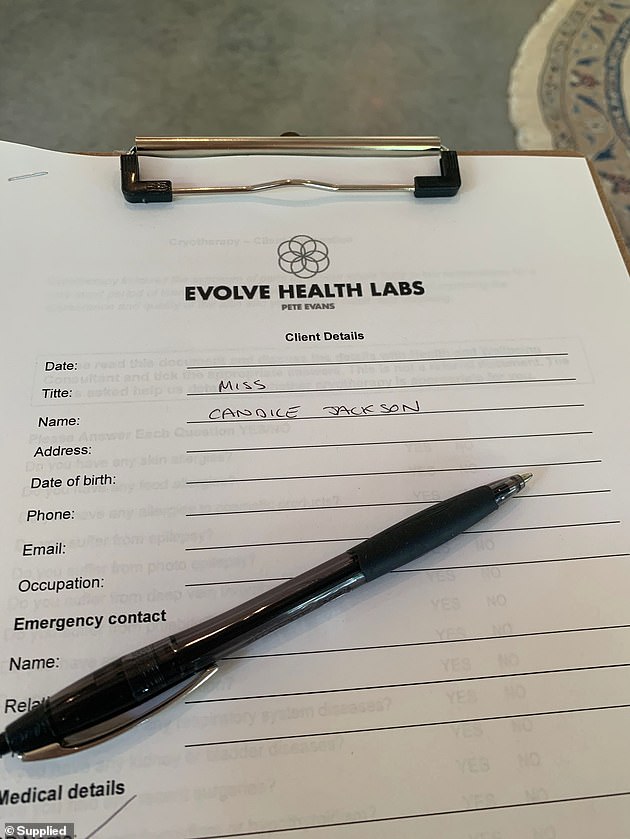 At your own risk: I signed a waiver acknowledging the potential temporary and permanent side effects of the two treatments I had booked 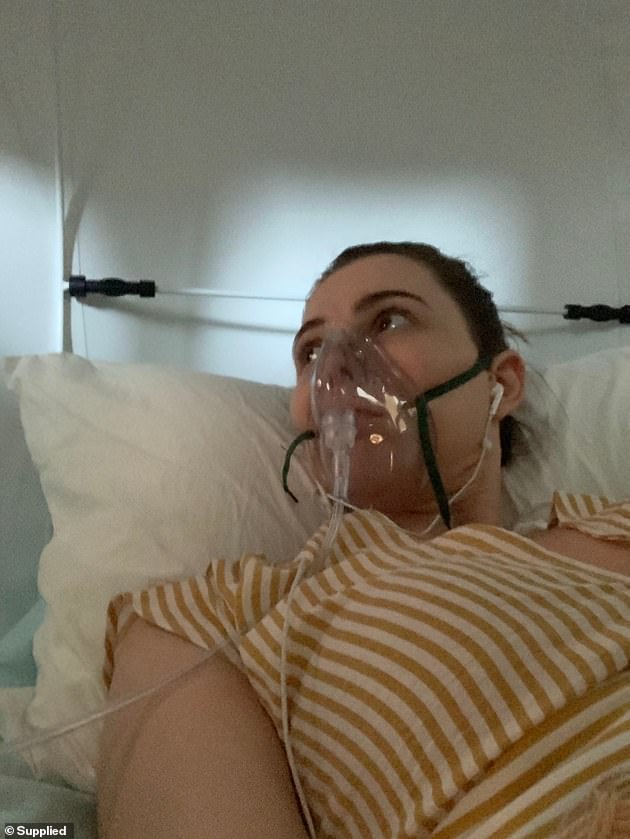 As the chamber began to expand with loud whooshing noises from the vents, I couldn’t help but find myself distracted by the caution signs and flickering pressure gauges 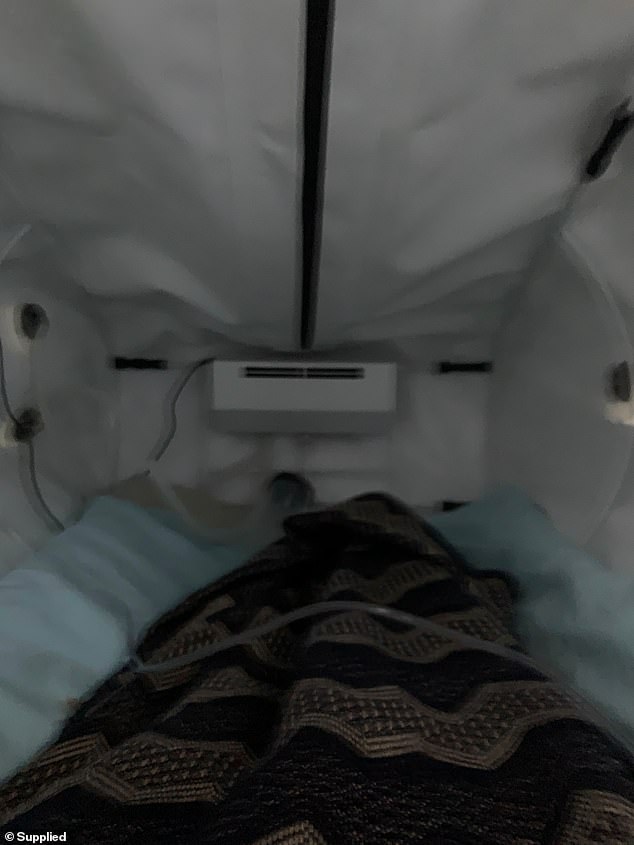 Inside: I was allowed to bring in my phone and get comfortable with a pillow and blanket as I continued breathing through a fitted mask

There are no hospital booties or special clothing required to use the HBOT at Pete’s facility, and I was allowed to bring in my phone and get comfortable with a pillow and blanket. I was told people often fall asleep in the chamber, but I was far too anxious and on edge to get to that state of relaxation.

As the chamber began to expand with loud whooshing noises from the vents, I couldn’t help but find myself distracted by the caution signs and flickering pressure gauges.

It took less than 10 minutes inside the purpose-built ‘body bag’ for me to wonder if I’d also leave in one.

I’m the first to admit that statement sounds overly dramatic, but hear me out. I was genuinely scared at first by the futuristic-looking therapy.

Only in the past few weeks, I watched an episode of horror TV series Hannibal, where one of these machines caught on fire and incinerated the woman inside due to a static charge. I was assured it couldn’t happen with their mild chamber as potential fire hazards occur in medical grade facilities where the chambers use 100% oxygen and the air pressures is far greater. 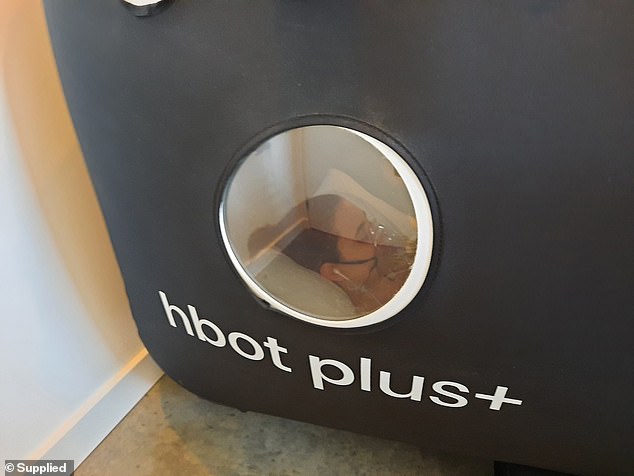 Anxious and a little claustrophobic: While scary at first, the treatment was uneventful and painless, although I did experience a build up of pressure in my ears, similar to in an airplane 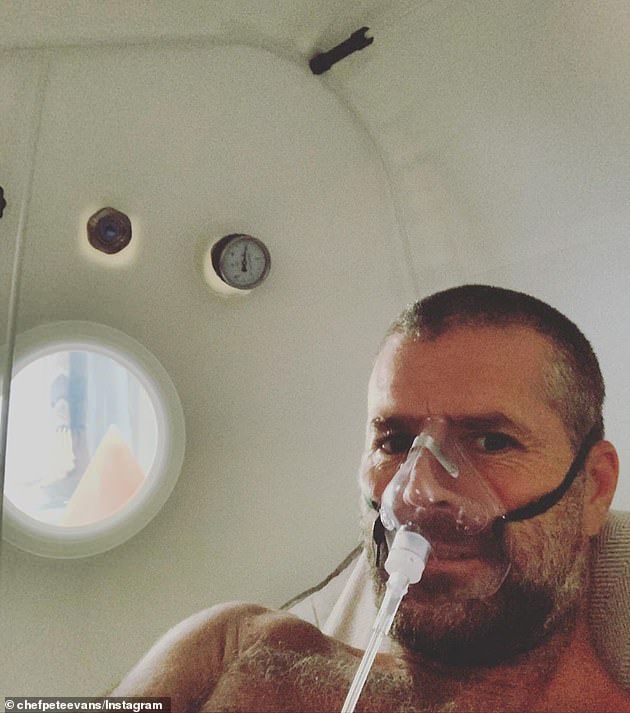 Nonetheless I tried to remain still, as I thought: ‘Maybe I should have told my sister I put her down as my emergency contact.’ While my brain continued to wander, I wondered ‘should air taste like this? Does air even have a taste?’. I chose to accept the noises, close my eyes, take big, deep breaths through the oxygen mask and give the technician a brave thumbs-up as she checked on me intermittently throughout the treatment. Putting aside my anxious state and overactive imagination, the treatment was uneventful and painless, although I did experience a build up of pressure in my ears, similar to the sensation in an airplane.

After an hour, I emerge relaxed and clear headed. I also felt a little lighter on my feet, but perhaps it was a sense of relief, both mentally and physically. I survived. I also found falling to sleep easier that night, however it’s unclear if that was a direct result of the treatment or a placebo affect. 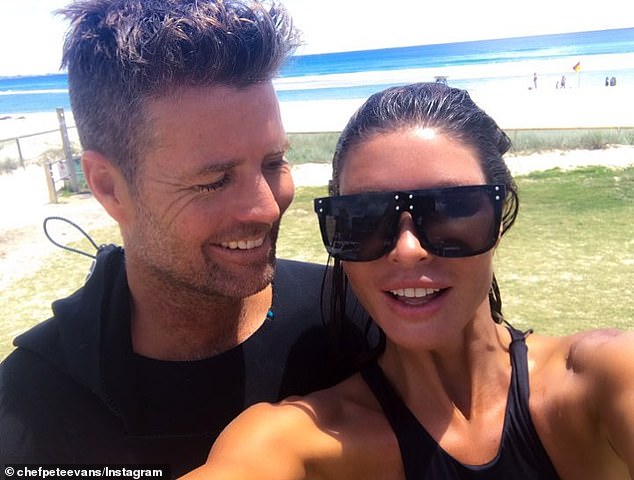 Joint venture: While Pete Evans’ (left) name is mentioned numerous times by staff and clients during my visit, the business appears to be more hands-on for his wife, Nicola Robinson (right)

While Pete Evans’ name is mentioned numerous times by staff and clients during my visit, the business appears to be more hands-on for his wife,  Nicola Robinson. Nicola was friendly and genuinely excited to share the benefits of the clinic’s methods to new and returning clients.

She administered my cryogenic ‘penguin facial’, and set me up on a ‘healing bed’ with a heated biomat fitted with amethyst crystals. Wrapped snug in a blanketed cocoon, Nicola used the cryo wand to beam vaporized liquid nitrogen across my forehead, cheeks, nose and chin. 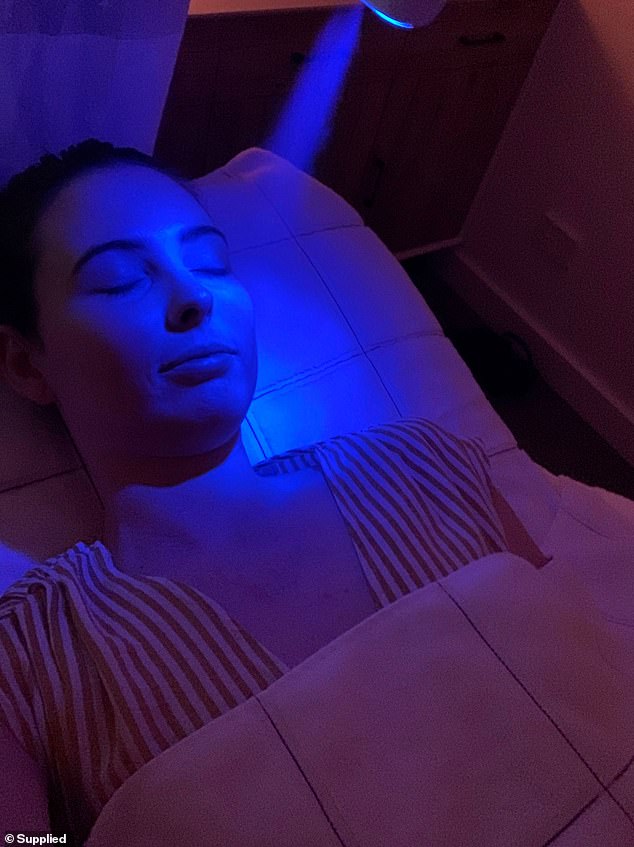 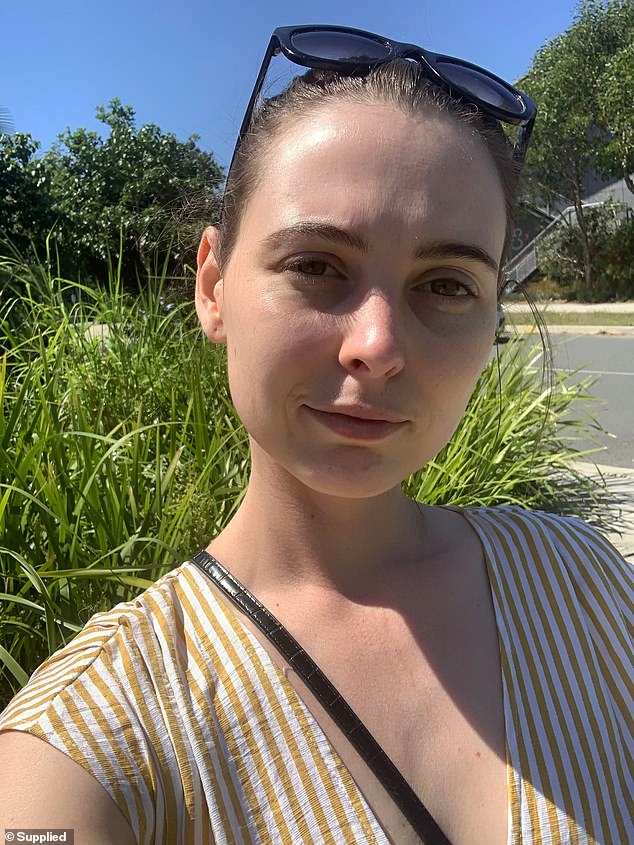 If you’re concerned about booking any of the treatments on offer at Evolve, do your own research and chat with your health care professional to determine if its right for you.

Daily Mail Australia were not paid to review Evolve Health Labs, and were not given these treatments for free.

WHAT IS A HYPERBARIC CHAMBER AND HOW IS IT USED?

A hyperbaric chamber is a highly-pressurized room or tube where a patient is given pure oxygen to breathe.

The air pressure in these chambers is three times higher than normal pressure outside.

At this higher air pressure, the lungs are able to take in more oxygen than under normal conditions.

All the body’s tissues require oxygen to live and stay healthy, so in a hyperbaric chamber the lungs take in more oxygen which is then carried throughout the body to restore tissues that may be struggling or infected.

WHAT ARE HYPERBARIC CHAMBERS USED TO TREAT?

Hyperbaric oxygen therapy is a proven treatment for decompression sickness, a condition that some people develop after SCUBA diving, wherein the high pressure of being deep under water causes nitrogen to form in their blood vessels.

This typically causes muscle and joint aches and fatigue, but in rare cases can prove fatal. Hyperbaric oxygen therapy reverses the process that allows the dangerous nitrogen bubbles to form.

According to the Mayo Clinic, doctors may also recommend hyperbaric oxygen therapy for:

Although claims have been made that the therapy helps a whole hosts of other medical issues, there is only scientific evidence to support the above uses.

There isn’t significant reason to believe it treats conditions like fibromyalgia, depression or chronic fatigue syndrome. 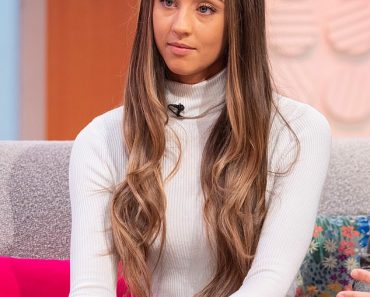 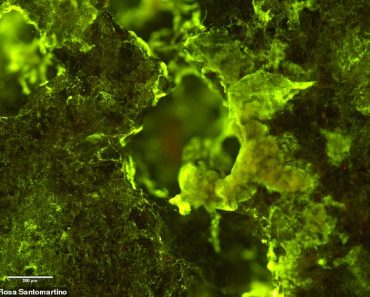 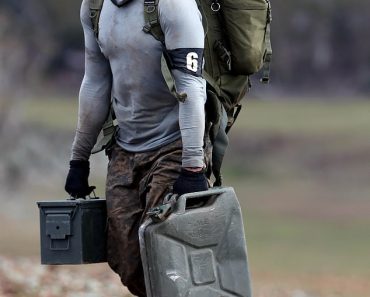