Kirsty Gallacher has spoken out about her shock drink-driving arrest – and subsequent 18-month ban from the road – describing the experience as ‘horrific’.

The TV personality, 44, was about three times the legal limit when she was pulled over on 12 August 2017 in Eton, the morning after a night out with pals.

And the former Sky Sports presenter broke down in tears in a new interview with The Sun as she recounted how having the spotlight shined on her misstep affected her.

Arrest: Kirsty Gallacher has spoken out about her shock drink-driving arrest – and subsequent 18-month ban from the road – describing the experience as ‘horrific’. Pictured in 2019

When asked by her interviewer Beth Neil what advice she would give herself if she could go back to that time, the star became emotional.

She said: ‘I’m crying because I feel sadness for that person. I just wanted to know I’d be all right. And I am now, I know I’m all right now.’

Kirsty continued: ‘If I’m honest, that person is unrecognisable to me and that makes me sad because I think of the pain I was going through. 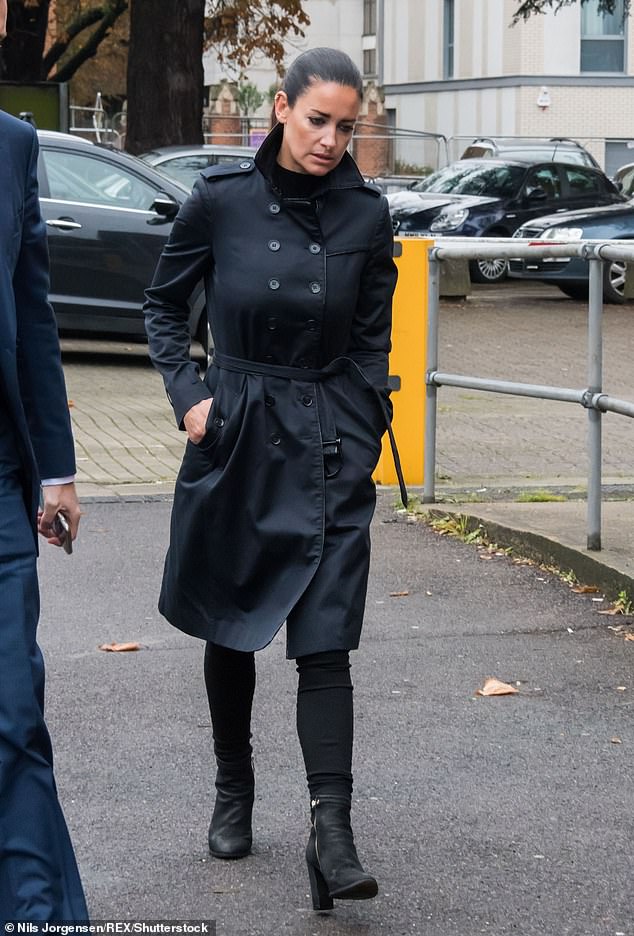 Limit: The TV personality, 44, was about three times the legal limit when she was pulled over on 12 August 2017 in Eton, the morning after a night out with pals. Pictured at court in 2017

‘It was a really sad, painful time, but I’m in a place now where I’m loving my life, I’m happy, doing everything I want to do, which is brilliant.’

She added: ‘I’m such a different person now. That doesn’t mean I was a bad person then – I’m a completely normal person like everyone else out there. I’ve just learned to give myself a break.’

In August 2017, the mother-of-two had consumed so much booze on a night out that she was about three times the legal limit at 11am the next day when she went to meet her two sons in Berkshire.

Former Strictly Come Dancing contestant Kirsty had been drinking until 3am before she drove her £40,000 BMW X4 eight hours later and was pulled over for driving erratically.

In September 2017, Kirsty was banned from driving for two years and ordered to carry out 100 hours of unpaid community work after admitting to one count of drink-driving. The sentence was cut by six months after she took part in a safety course.

A breathalyser test found she had 106 micrograms of alcohol per 100 millilitres of breath – more than three times the legal limit of 35 micrograms.

However, it was a long and traumatic road that led to her meeting with law enforcement officers that fateful morning. 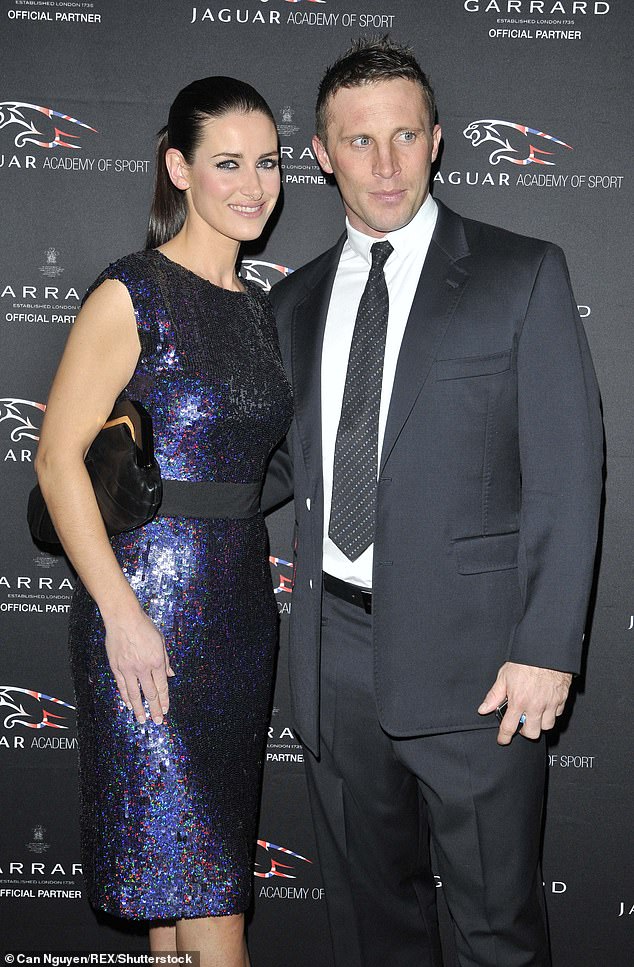 The star has admitted that she was left with post traumatic stress disorder following her ‘painful’ split from ex-husband Paul Sampson.

She split from retired rugby star Paul, 43, in 2015 following a 15-year relationship.

And five years on, the star spoke about the trauma of their ‘devastating’ break-up earlier this year, admitting that it left her ‘grieving and mourning.’

Speaking to The Sun earlier this year, the star outlined the heartbreaking effect that her divorce had on her, revealing that it left her ‘devastated’ and struggling to eat.

Kirsty went on to tell the the Outspoken Beauty podcast that amid the divorce, she was left ‘saddened’ for her two sons Oscar, 13, and 10-year-old Jude, whom she shares with Paul. 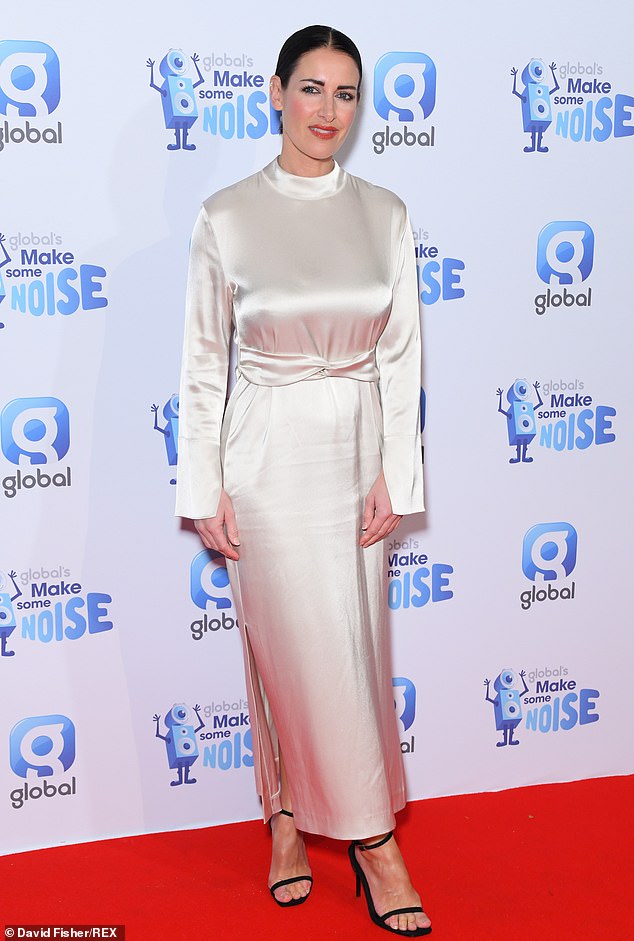 Difficult: Five years on, the star opened up about the trauma of their ‘devastating’ break-up, admitting that it left her ‘grieving and mourning’ (pictured in 2019)

Meanwhile, the former Sky Sports presenter admitted that she regretted taking part in Strictly Come Dancing so soon after the split, adding that it ‘wasn’t the right time.’

Kirsty, who took part in the show in 2015 and was paired with Brendan Cole told the Made By Mamas podcast: ‘It was a horrible time and I was grief-stricken for the children.

‘I was doing Strictly Come Dancing which I loved but I definitely shouldn’t have done it. It wasn’t the right time.’

It was recently revealed that Kirsty and Paul Sampson toasted their divorce from opposite ends of a champagne bar.

The couple were in a feud after calling an end to their 15 years together and they had one awkward drink sitting far apart at the plush bar.

But ex-England rugby ace Paul decided to go over and finally call a truce to call an end to the bitterness.

He told The Sun on Sunday: ‘She got quite annoyed but I said, “Look, this doesn’t have to be a war.”‘

Paul was speaking publicly for the first time since the pair’s split six years ago. 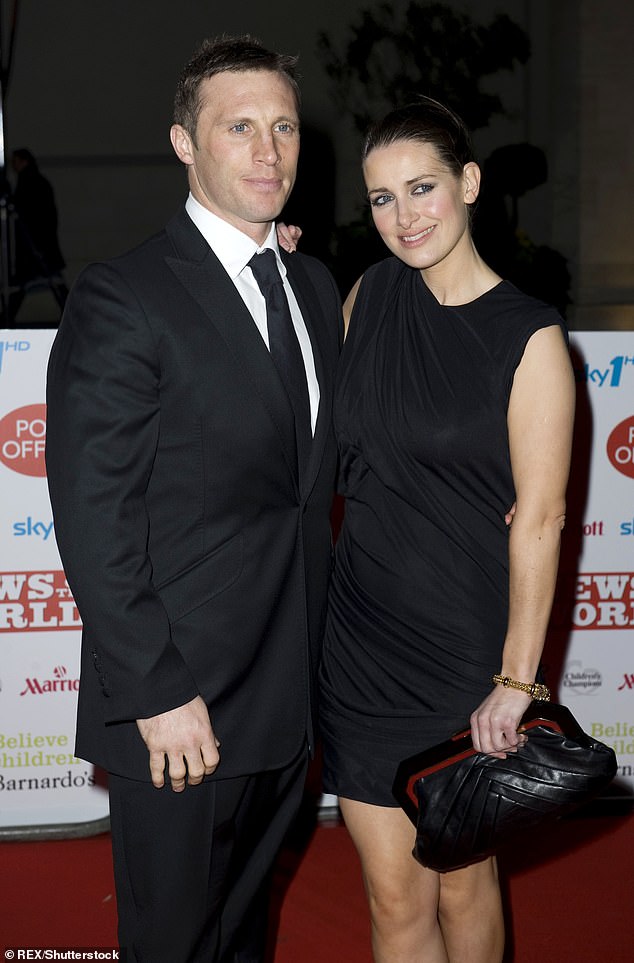 Traumatic divorce: She said, ‘I was grieving and mourning. I think I had post traumatic stress disorder. I was skinny, not eating and wanting to black it all out’ (pictured in 2010)

He said: ‘I could have had plenty to say, especially after Kirsty gave one or two interviews that indicated I had packed a bag and left the family home.’

He revealed how Kirsty announced she wanted a divorce while he was in a pit of depression after hanging up his rugby boots, compounded by the death of his father.

The former London Wasps player struggled with becoming a stay-at-home father while his wife was travelling the world for Sky Sports.

He has now launched his own life-coaching business to help sports players and separating couples.

He said: ‘When you come to the end of your career you think you’re a bit washed up. It was a tough time. I wouldn’t wish it on my worst enemy.’ 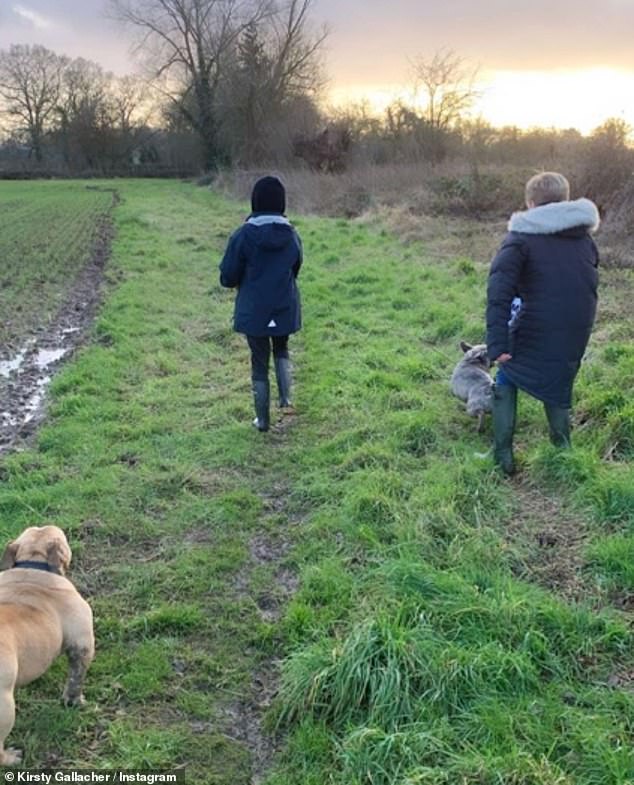 The glamorous couple met in 1999 shortly after Paul had won his first cap for England and Kirsty was made the new face of Sky Sports News.

They married in 2010 in a £50,000 ceremony in Spain but their relationship started to wobble the following year after Paul’s retirement from rugby due to injury.

He went into a depression and did not know what to do with himself, a situation worsened by the fact he had failed to come to terms with his father’s death in 2004.

Kirsty recently splashed out £1.4 million on a stunning newly built barn-style house in Ascot following her divorce from Paul.

In the divorce she had kept their marital home in Virginia Water, and lived there with sons Oscar and Jude. 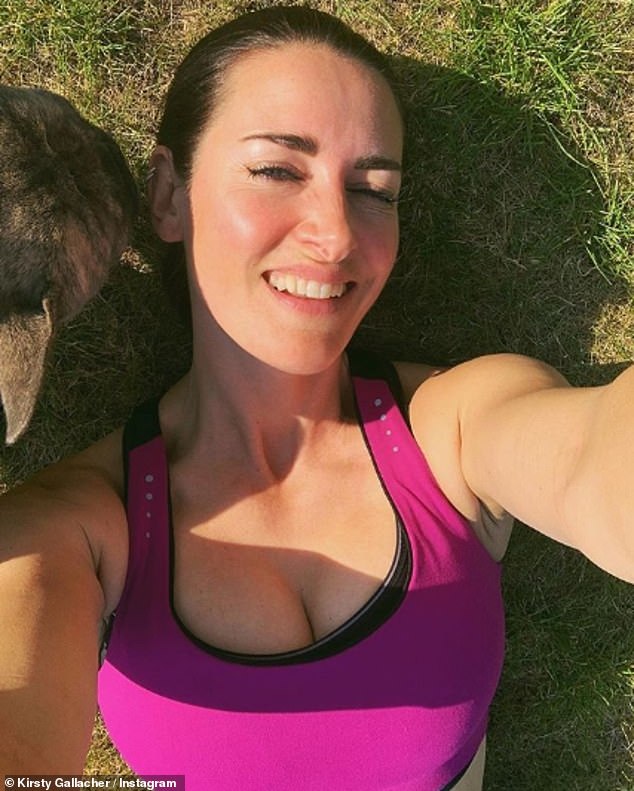 Regrets: The former Sky Sports presenter admitted that she regretted taking part in Strictly Come Dancing so soon after the split, adding that it ‘wasn’t the right time’

The presenter sold the Surrey home for £895,000 and relocated to the farmhouse in Berkshire with her children and pet pooches.

Kirsty’s decision to sell up comes after she announced last year that she was considering moving away.

Speaking to Metro last year, she explained: ‘When I met Paul, my former husband, we moved to Virginia Water, which felt like going home, as it was where I grew up.

‘I am still there, along with our British bull dog Betsy and our rather excitable French bull dog Bertie. My boys were born in this house and go to school locally. I’ve done a lot of work to it, but, as much as we love it, another move is on the cards.’

Kirsty was able to secure £895,000 for the Virginia Water home which also boasted four bedrooms, a patio garden area and spacious living area. 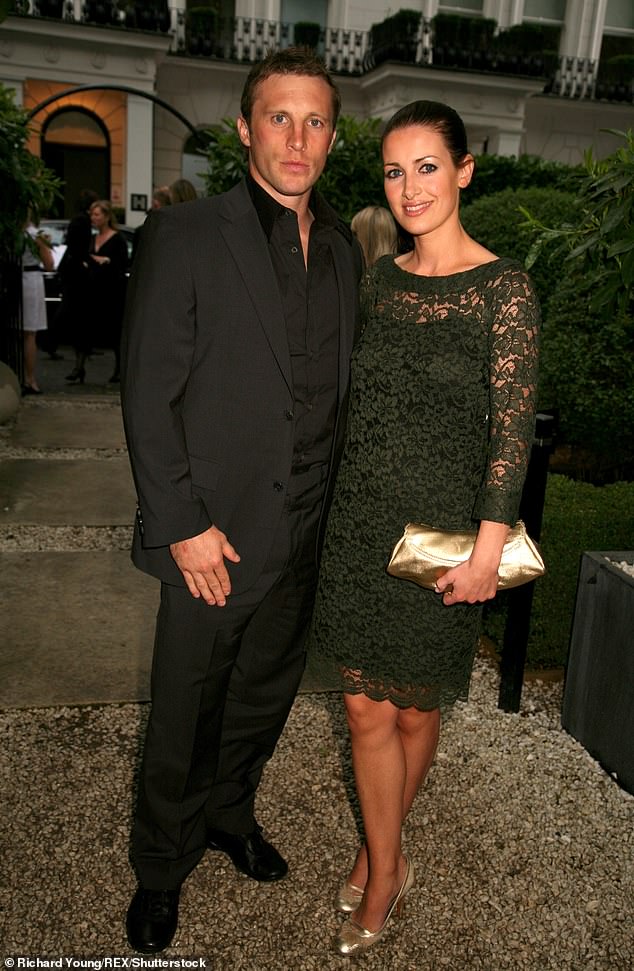 Reflection: Paul said recently, ‘I could have had plenty to say, especially after Kirsty gave one or two interviews that indicated I had packed a bag and left the family home’ (pictured in 2007) 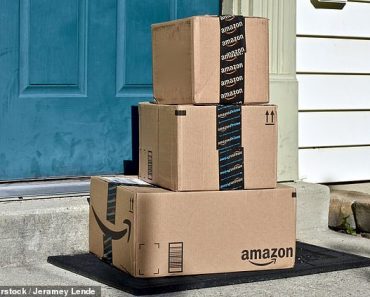 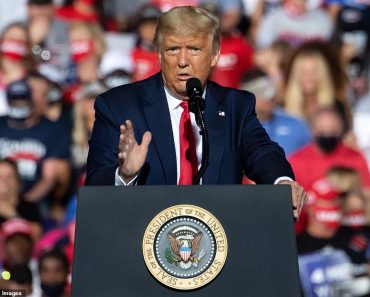 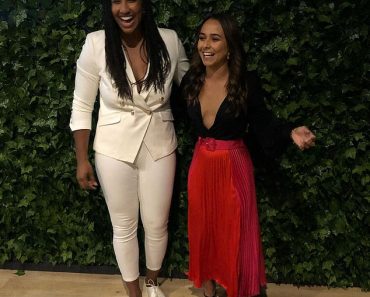 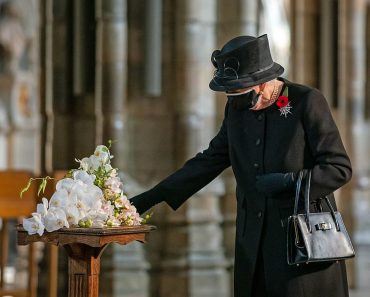