The colleagues of Matiu Ratana bought the slain custody officer a McDonald’s breakfast that he was owed to place on his empty chair in a heartbreaking tribute.

Sgt Ratana, 54, was allegedly shot five times in the chest at point-blank range by a handcuffed suspect at Croydon Custody Centre, London at 2.15am on Friday.

It is understood he was preparing to search the man, who had been detained for possession of ammunition and Class B drugs with intent to supply, with a metal detector in a Covid screening cell.

His colleague Richard Lovelock said that although buying a meal for Sgt Ratana was ‘daft’, it was inspired by a ‘touching moment’ that had helped the team come to terms with his death.

Sgt Lovelock posted a picture of the breakfast to Facebook, which was accompanied by an All Blacks Rugby shirt in honour of Sgt Ratana’s heritage and enthusiasm for the sport. 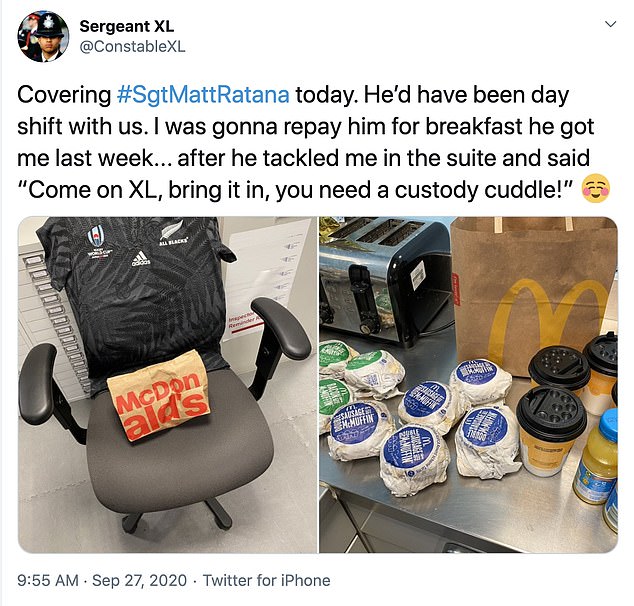 In a Twitter post, a colleague explained how Ratana would have been on a day shift with them

‘My colleague Chris got him the breakfast because Matt, being the type of guy he was, bought him one when he was last in and said “don’t worry, sort me out next time”.

‘I know it sounds daft but it’s just those touching little moments that have helped us all through yesterday and today.’

In another post on Twitter, a policeman shared images of the tribute and explained how Sgt Ratana would have been on a day shift with them on Sunday.

‘Covering #SgtMattRatana today. He’d have been day shift with us,’ he said. 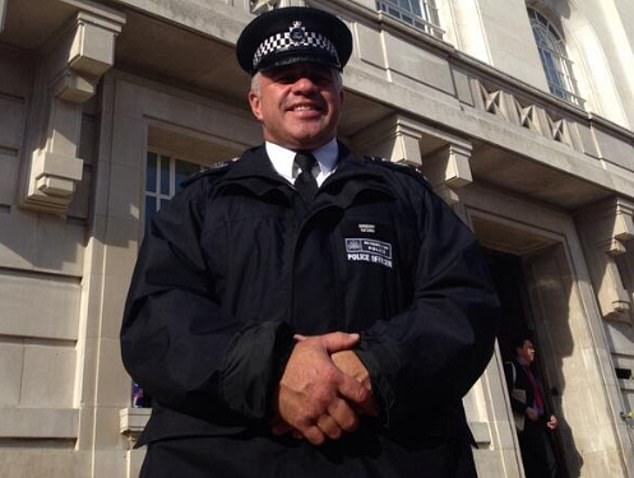 Sgt Matiu Ratana, who was 54, was allegedly shot five times in the chest at point-blank range during the incident on Friday 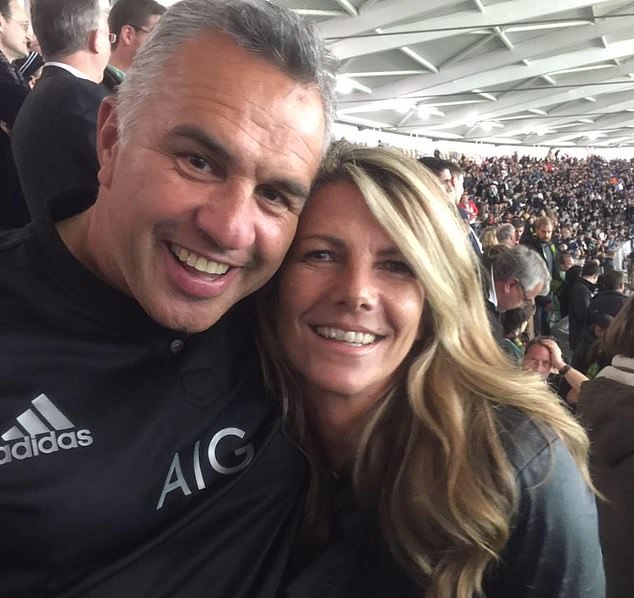 It is understood he was preparing to search the man, who had been detained for possession of ammunition and Class B drugs with intent to supply, with a metal detector in a Covid screening cell. Pictured: Sgt Ratana and his partner Sue

‘I was gonna repay him for breakfast he got me last week… after he tackled me in the suite and said “Come on XL, bring it in, you need a custody cuddle!”’

The tribute came on National Police Memorial Day, which saw multiple commemorations take place for officers across the UK who have lost their lives while on duty.

Sgt Lovelock calculated the pay that Sgt Ratana would have earned while working on the overtime shift and has donated it to a JustGiving page supporting the family, which has already raised over £56,000.

The Metropolitan Police officer has served 29 years with the force, the same as Sgt Ratana before his death, and said they had often talked about retirement plans. 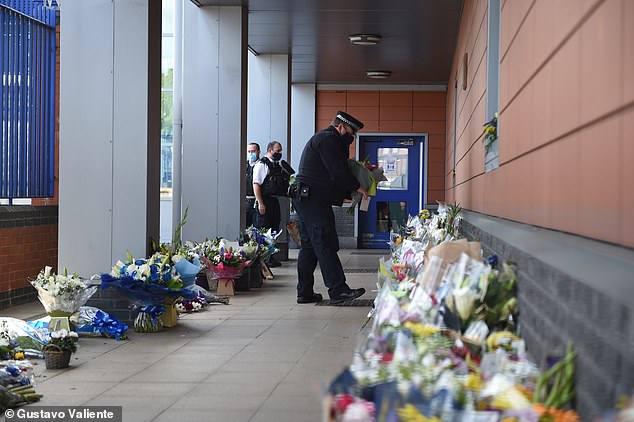 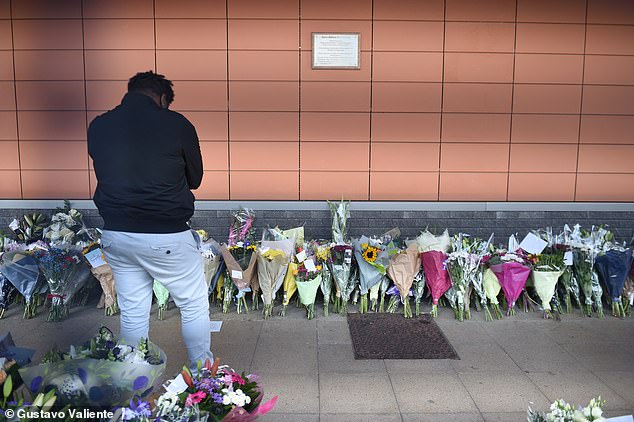 Sgt Ratana, whose job was to look after the care and welfare of detained people, died in hospital following the fatal shooting on Friday 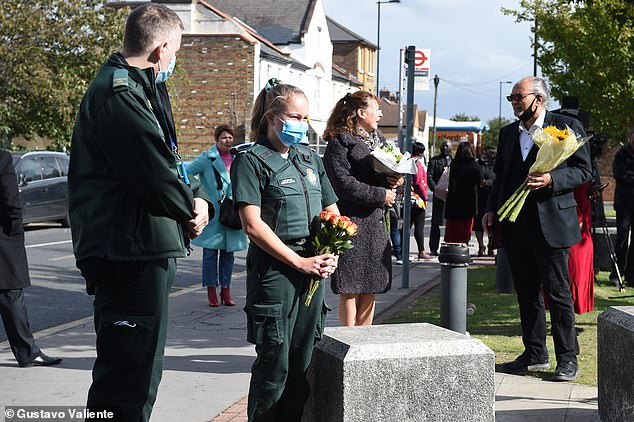 ‘We’ve got similar interests in rugby and beer and all those things that lads talk about but he genuinely was one of the nicest guys,’ he said.

‘You can see that in the tributes paid to him by so many people. We’re a team, we work as a team.

‘So when the team went for breakfast this morning, we didn’t want to leave Matt out so we got him that breakfast.

‘The reality is he probably would have needed several.’

Sgt Ratana, whose job was to look after the care and welfare of detained people, died in hospital following the fatal shooting on Friday.

The Metropolitan Police officer has been described as someone who epitomised the role police play in protecting others and, as head coach at East Grinstead Rugby Club, an ‘irreplaceable figure’.

A man arrested at around 2am on Sunday in Norwich, Norfolk, on suspicion of supplying a firearm, today remains in custody at a south London police station. 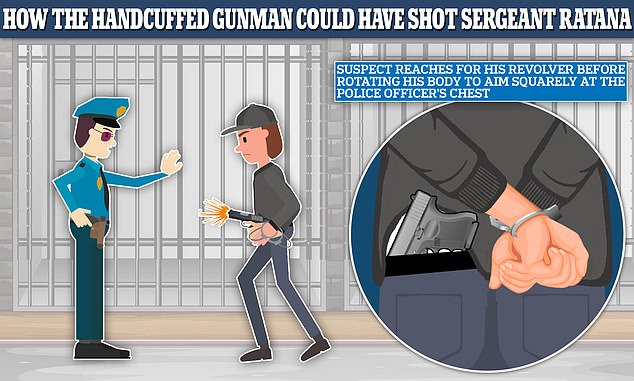 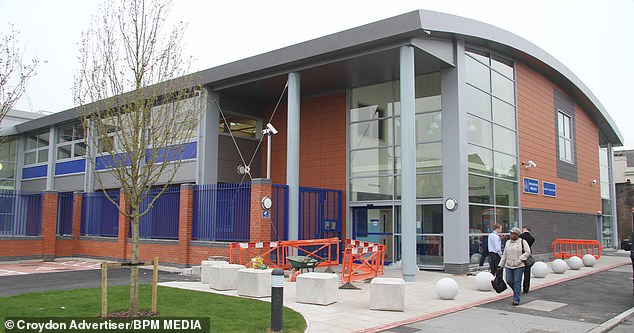 The suspect for the shooting – widely reported to be 23-year-old Louis De Zoysa – has not yet been spoken to by investigators due to his critical condition.

Police have been searching an address on Southbrook Road in Norbury, south-west London, and another on Park Road, Banstead in Surrey following Sergeant Ratana’s death.

A police guard was in place outside Courtlands Farm off Park Road yesterday, following reports from neighbours of an explosion in the early hours of the previous morning.

One neighbour said: ‘The blast was at 5.40am and woke up our little boy and we sent him back to bed, but what we’ve heard from other neighbours there was about 20-odd police and they were lined down the driveway.’

In the lead-up to Friday’s killing, the suspect had been arrested by patrolling officers for possession of ammunition and possession of class B drugs with intent to supply following a stop and search, then handcuffed behind his back before being taken to the station in a police vehicle.

According to the Independent Office for Police Conduct (IOPC), he was taken into the building and sat in a holding area in the custody suite, then opened fire while still in the handcuffs as officers prepared to search him with a metal detector. 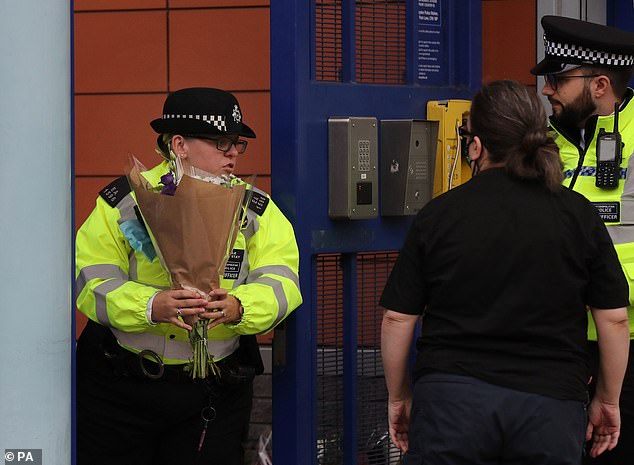 The suspect for the shooting – widely reported to be 23-year-old Louis De Zoysa – has not yet been spoken to by investigators due to his critical condition. Pictured: Croydon Custody Centre 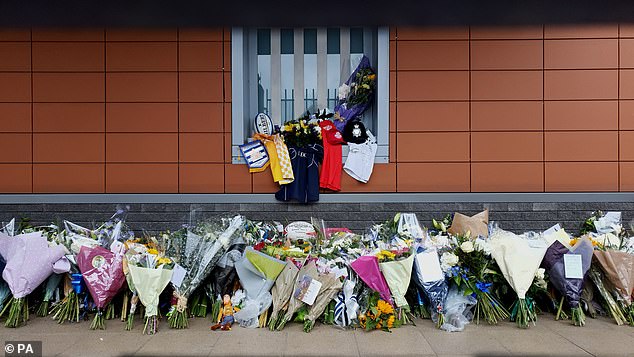 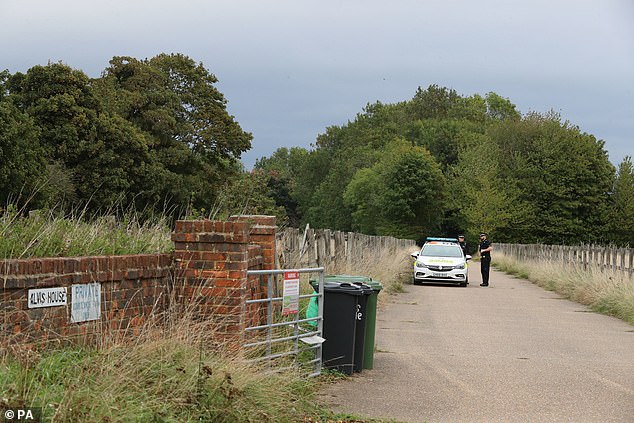 Police at Courtlands Farm in Banstead, Surrey, where officers carried out searches in relation to the death of Sgt Ratana

No police firearms were discharged in the incident, during which the suspect was also injured, and the case is not being treated as terror-related.

Multiple tributes have been paid to the New Zealand-born sergeant since his death, including from the country’s Prime Minister Jacinda Adern.

Metropolitan Police Commissioner Dame Cressida Dick said he was an ‘extraordinary person’ who was ‘very good at his job’.

She said his ‘terrible’ death might bring home to people the challenges of police work, helping them to ‘see us police as who we are – human beings, going to work to help people, to support people and to protect people’.

She added: ‘Matt was the epitome of that.’

The Prince of Wales, speaking during a virtual service for National Police Memorial Day on Sunday, said his death is a reminder of the dangers officers are confronted with.

Prince Charles added: ‘The dreadful incident in Croydon on Friday is the latest heart-breaking evidence of the risks faced by our officers daily.’

Friends and teammates gathered in silence in East Grinstead to pay their respects as the club flag was flown alongside the New Zealand flag and an All Blacks rugby team flag to honour Sergeant Ratana’s love of the sport and his roots.

Police have previously said they are working with a ‘determination to find justice for our colleague and his family’. 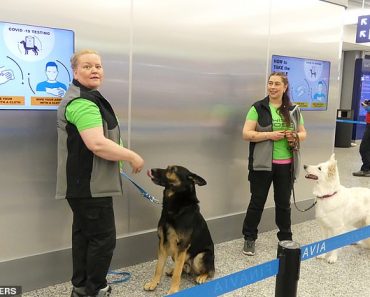 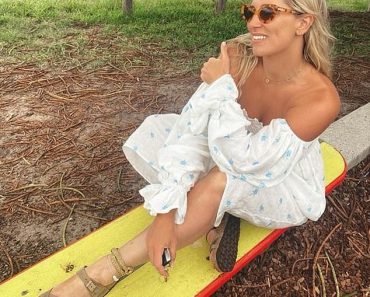 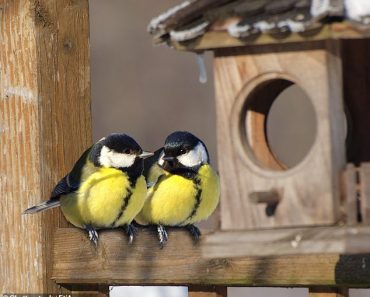 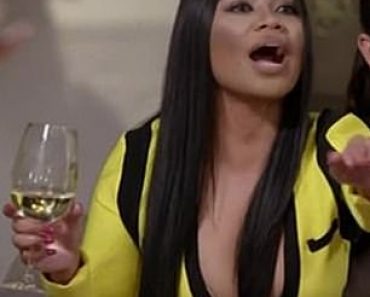 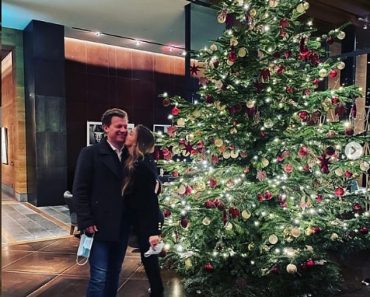