YouTube has been criticized by members of the deaf community for deactivating a feature that allowed channels to crowdsource captions and subtitles.

The ‘Community Contributions’ feature was deactivated September 28, one day after the end of International Week of the Deaf.

The Google-owned platform said it was pulling the plug because the feature is ‘rarely used and people continue to report spam and abuse.’

Liam O’Dell, a journalist who broke the story on the feature being removed, told the DailyMail.com: ‘As a deaf viewer, it’s been a safety net for me when watching content.’

‘Unfortunately, a lot of YouTubers still aren’t committing to captioning their videos, so subtitles and translations submitted by fellow viewers were an incredible back-up in those instances – especially when the automatic captions are still far from perfect.’

One day after the end of International Week of the Deaf, YouTube deactivated its Community Contributions feature, which allowed content creators to crowdsource captions. Deaf viewers called the feature an invaluable asset

However, more than a half-million people have signed a Change.org petition calling on YouTube to reinstate community-generated captioning.

In addition to offering assistance to deaf and hard-of-hearing viewers, supporters say the option benefited people with audio-processing disorders and those trying to consume media in a foreign language.

YouTube first announced the removal was coming in July, giving today as the deadline to publish drafts of captions. 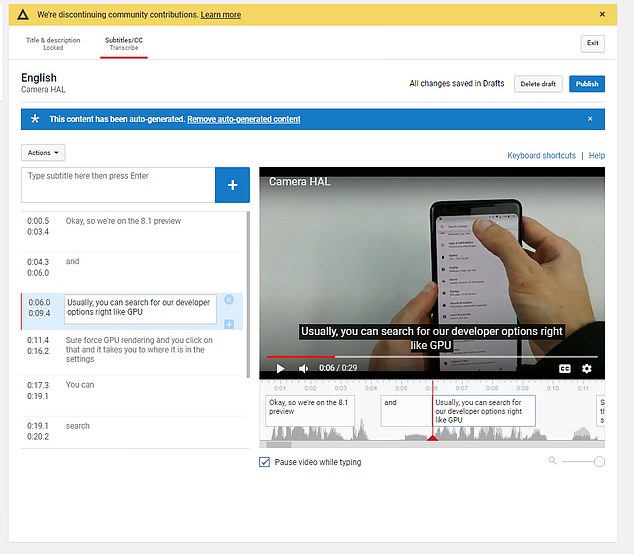 A sample page from YouTube’s Community Contributions feature. The platform says its removed the option because it was seldom used and prone to abuse and spam

The Community Contributions feature allowed viewers to manually close-caption or translate videos and submit them for approval.

It had to be enabled by a channel owner, who would then review and approve submissions.

They could also be published automatically after receiving enough community reviews, although that feature was disabled in August 2019. 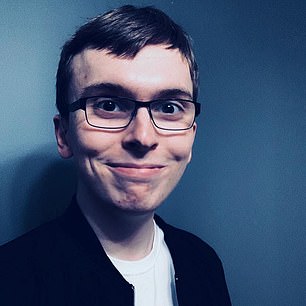 Journalist Liam O’Dell first reported in July on YouTube’s decision to remove the Community Contributions feature. ‘As a deaf viewer, it’s been a safety net for me when watching content,’ he told the Daily Mail

According to the takedown page, less than 0.001 percent of channels published community captions in the last month.

YouTube currently offers machine-transcribed subtitles that are often full of errors, according to Ars Technica.

Content creators can still manually caption videos themselves, and use automatic captions or paid third-party tools.

And YouTube has said those who used Community Contributions for at least three videos in the last two months will get a free 12-month subscription to the captioning service Amara.

There are about 37.5 million deaf or hard-of-hearing people in the US and American Sign Language (ASL) is the third most used language in the country.

ASL is a complete language that uses signs made by moving the hands combined with facial expressions and body postures. 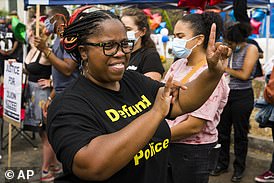 It is the primary language of many North Americans who are deaf and is one of many communications options for people who are deaf or hard-of-hearing.

British Sign Language (BSL) is used in place of ASL in the UK.

BSL users utilize both hands for the alphabet while ASL users only utilize one.

Signers and verbal communicators use the same neural skills to chat, according to scientists.

Many creators in the community believe the feature was underpromoted, especially after the automatic publishing feature was removed.

‘I think that YouTube could have done more to address the issue of low usage prior to making this decision,’ O’Dell said.

‘Community captions were never once promoted on YouTube or TeamYouTube’s Twitter accounts, and creators have talked about how they were never notified when a new community captions track was submitted by a viewer.  I am left wondering how they can justify removing this feature.’

He added, while spam and abuse did exist, YouTube could have done more to protect against them when they launched Community Contributions years ago.

As of Monday afternoon, more than 511,000 people have signed a Change.org petition calling on Google to reverse its decision.

‘Community captions ensured that many videos were accessible that otherwise would not be. People from so many different backgrounds, working together to enjoy content together. Why remove that?’

Other critics say most content creators are one-person operations without the time, resources or funds to create captions themselves, especially in another language.

‘This will be a deathblow to many virtual YouTubers who have large Western audiences that rely on this feature,’ a commenter wrote on the takedown page.