Pantomimes are back… oh yes they are! Traditional festive stage shows will return in time for Christmas as theatres get cash for seats they must leave empty

By Mario Ledwith and Jason Groves for the Daily Mail

Pantomime season has been saved as plans being announced today will enable audiences to attend festive performances.

Cash-strapped theatres will receive money from a private fund to cover the cost of the seats that they have to leave empty to comply with social distancing measures.

The plan to revive theatre-going is being funded by Camelot.

The National Lottery operator approached Culture Secretary Oliver Dowden with an offer of help after he came under mounting pressure to support arts bodies.

Pantomimes are expected to take place at theatres including the London Palladium, which normally seats an audience of more than 2,200, as part of the deal.

Last month, Mr Dowden said his officials were working on ‘Operation Sleeping Beauty’ to bring back ‘the magic of theatre for families this Christmas’.

However the plan fell flat with the sector remaining crippled by social distancing rules that have placed huge swathes of the industry in dire financial circumstances.

Under the funding agreement, sources said Camelot has agreed to pay theatres for the empty seats required so that audience members can stay two-metres apart.

The arrangement, which has also been orchestrated by leading pantomime director Michael Harrison, will provide theatres with a cash injection and allow rehearsals to begin. 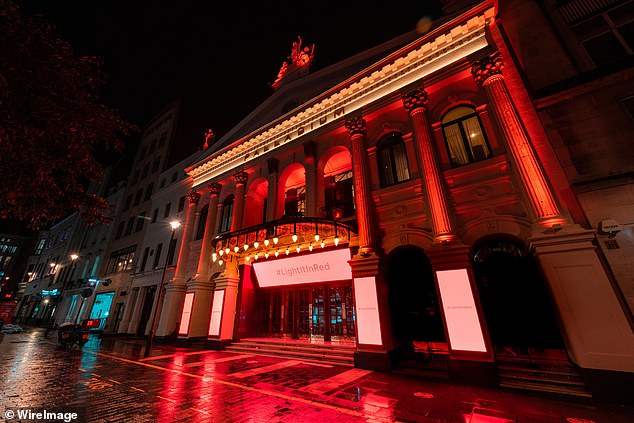 Pantomimes are expected to take place at theatres including the London Palladium (pictured), which normally seats an audience of more than 2,200, as part of the deal

Venues were allowed to reopen from August 1, but have been forced to limit ticket sales and reduce capacity to comply with Government regulations.

Many theatres and venues have been unable to reopen because the requirements of social distancing have made it financially unviable to do so. Restrictions mean audience members must sit in groups of no more than six.

The situation has seen immense pressure on the Government to provide emergency funding amid closures of arts venues and organisations.

Last month, theatre producer and composer Andrew Lloyd Webber spoke of the arts sector having reached ‘a point of no return’, adding that the industry must be given a bailout to ensure its survival.

Mr Dowden is also calling for the arts sector to be given a firm date when theatres will be allowed to return to full capacity.