Today show journalist Jess Millward was left speechless when her parents surprised her on her last day of work before maternity leave on Friday.

The Queensland reporter was presenting a live broadcast about the border closures when her mother, Jenny, and father, Tim, arrived on the back of a bike.

After receiving a bunch of flowers and a gift bag, Jess, 30, broke down in tears as she thanked her colleagues for organising the surprise.

Heartwarming: Pregnant Today show reporter Jess Millward broke down in tears as her parents surprised her on her last day of work before maternity leave on Friday

‘For everyone at home, today is Jess’s last day. She’s heading off on maternity leave,’ co-host Allison Langdon explained.

Karl Stefanovic added: ‘Over the years you have demonstrated to be one of the great reporters that we’ve ever had on the Today show.’

‘You have done an incredibly fine job of reporting and you’ve led the way constantly, every single morning,’ he added.

‘We know how hard it’s been for you for the last few months getting up at two in the morning and driving down the Gold Coast and covering news for us.’ 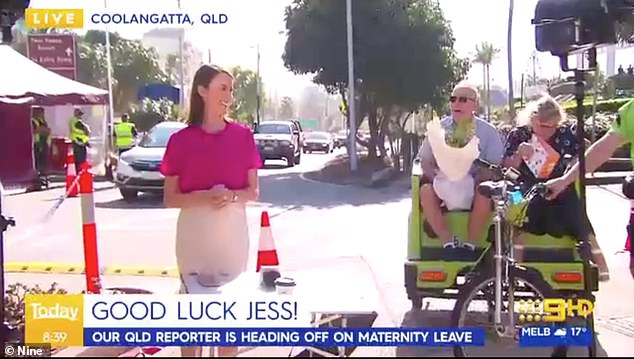 Surprise! The Queensland reporter was presenting a live broadcast about the border closures when her parents Jenny and Tim arrived on the back of a bike

Jess said she would definitely be returning to work after giving birth to her first child.

‘After I birth this little one, I’ll be back. Mixed emotions. I love you guys dearly. I work with the best in the business. I feel privileged every morning to do that,’ she said.

Jess announced she was expecting her first child with her husband, Seven News reporter Joel Dry, live on air in June. 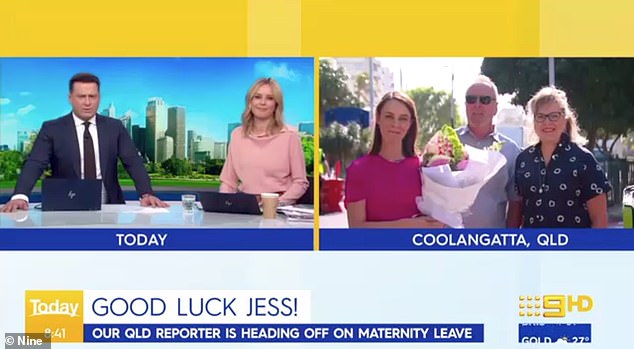 Special moment: After handing her a bunch of flowers and a gift bag, Jess broke down in tears as she thanked her co-stars for organising the surprise

She rubbed her belly and revealed she was expecting a child while reporting from a theme park on the Gold Coast.

‘I’m a thrill seeker from way back, a real bada** if you can say that on TV,’ Jess began.

‘I was all ready to go on the rides yesterday, super excited, cameraman ready to go, and then I remembered I have a certain condition at the moment, so I can’t really,’ she added. 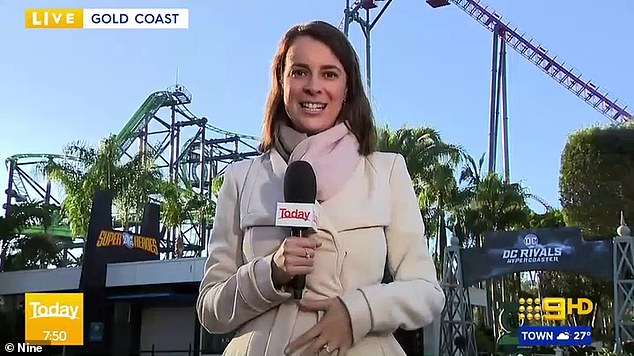 Karl then asked her about her ‘condition’, saying he had no idea what she was talking about.

Allison reminded Karl that he did know, and that it was a ‘good condition’.

Jess then teased her announcement by saying she was banned from going on rides for the ‘next five months’.

‘She’s having a baby!’ Allison said, confirming the happy news for viewers. 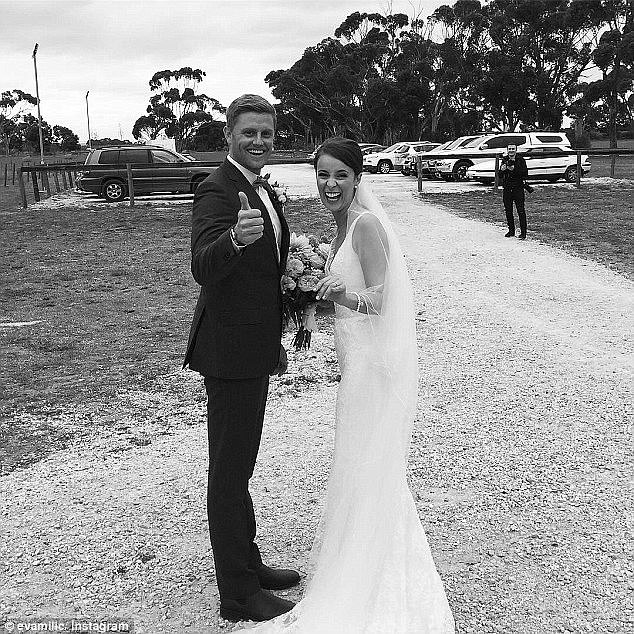 Wedding bells! Jess and her husband, Joel Dry, who works for Channel Seven, married in February 2018 in Langhorne Creek, South Australia. Pictured on their wedding day 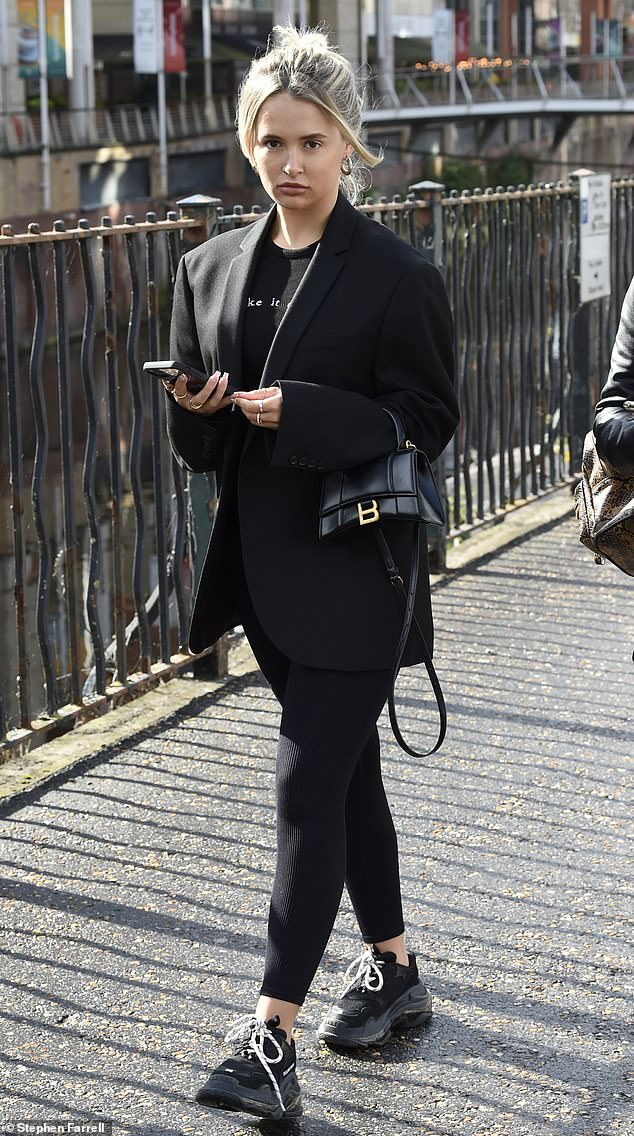 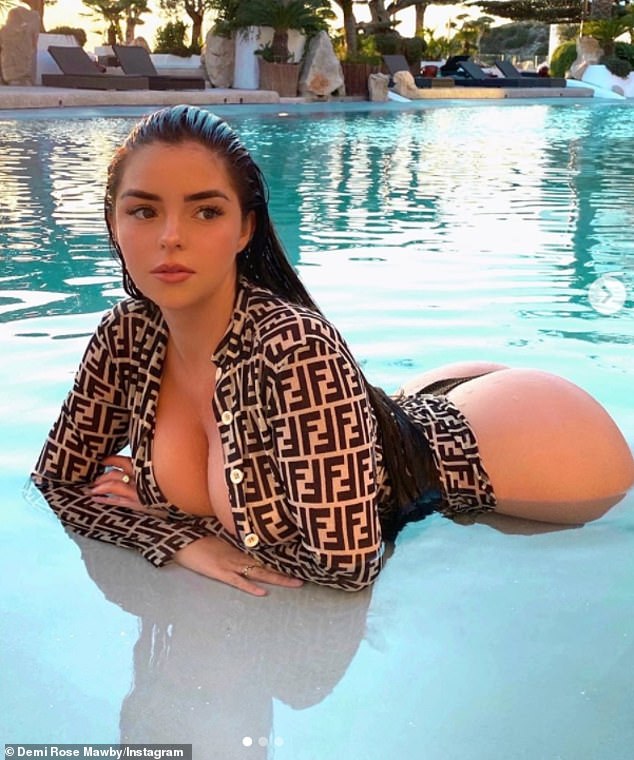 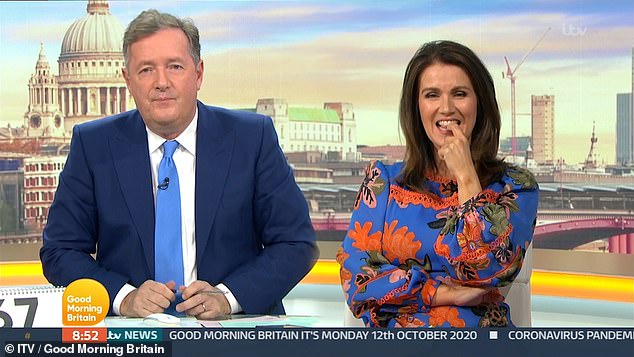