Police in riot gear today clambered up a treehouse where eco-warrior Swampy is protesting against HS2 and broke up the camp where he and eight other activists have been living.

The activist, real name Daniel Hooper, had teamed up with an HS2 rebellion group trying to protect an area of ancient woodland marked for destruction.

However four police officers clambered up to the treehouse at about midday today and began taking it apart.

The protesters claimed two people had been arrested in the treehouse so far and two on the ground on suspicion of aggravated trespass.

Swampy and the eight other activists have been living up the tree, nicknamed ‘The Beancan’, in Jones’ Hill Wood, near Aylesbury, Buckinghamshire, since October 1.

Yesterday, his 16-year-old son Rory joined him in the tree-top protest, but he was not believed to be there today.

The son of middle-class Berkshire parents, Swampy became the poster boy for environmentalism after he became involved in the protests against the A34 Newbury by-pass in 1996.

He later spent seven days and nights living in a tunnel dug by campaigners attempting to stop the A30 dual carriageway in Devon in 1997.

The specially trained climbing officers from Thames Valley Police urged Swampy and his friends to come down from the tree quietly.

One officer said: ‘I suggest you come with us. We will put you in a safe harness and lower you down.’ 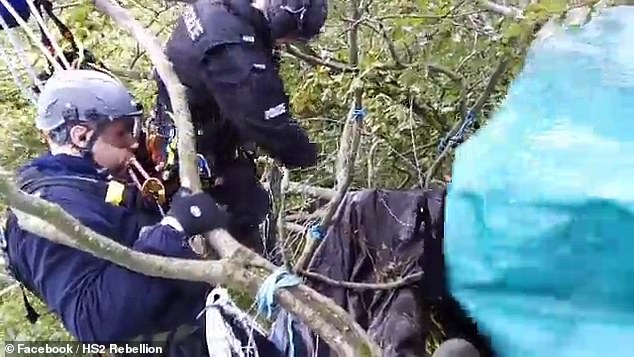 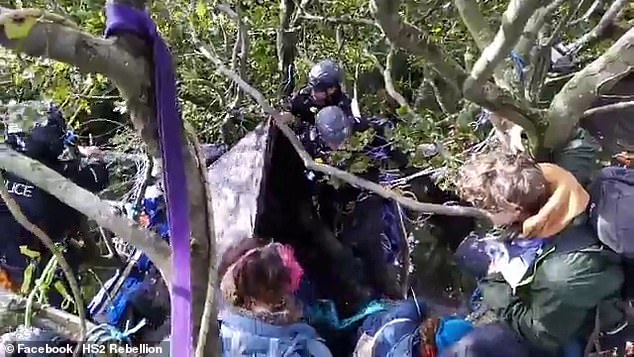 However as the police and the protesters embarked on bad tempered exchanges as they grappled high in the treetops.

One activist accused an officer of threatening to kick her in the head.

The officer claimed he was protecting his colleague as the activist was attempting to tamper with his safety ropes, which would have caused him to cascade down to the ground.

But the activists maintained that ‘none of us is going to put anyone in danger’.

A spokesman for the HS2 protesters said Swampy and his fellow activists were going to be arrested for aggravated trespass.

She told MailOnline: ‘Today is day eight of the eviction of Jones’s Hill Wood, near Wendover in Buckinghamshire. 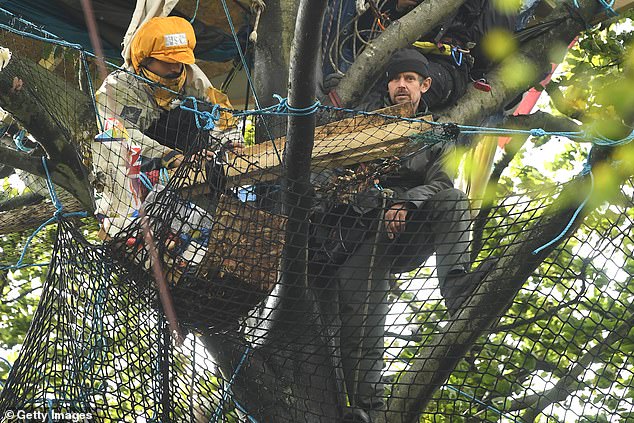 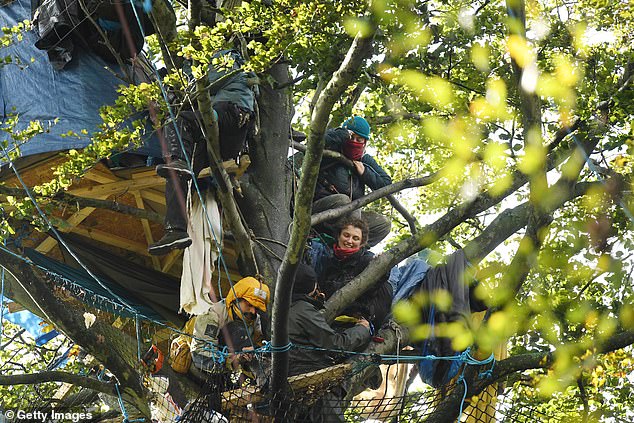 Swampy and the eight other activists (pictured today) have been living up the tree, nicknamed ‘The Beancan’, in Jones’ Hill Wood, near Aylesbury, Buckinghamshire, since October 1 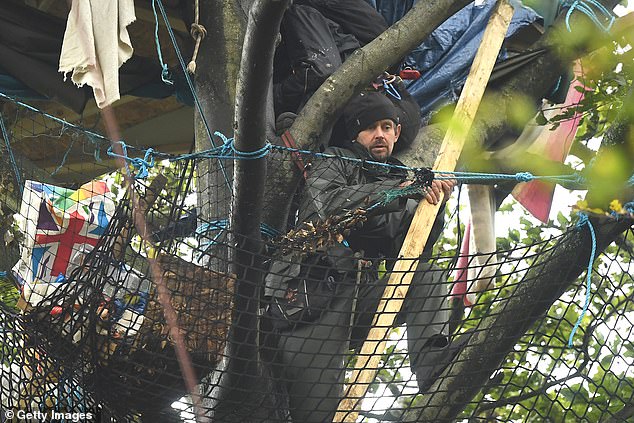 Eco activists have been camped out in the treehouse in Buckinghamshire, pictured today

‘At 1.20pm six protesters remain in the final treehouse known as the Bean Can. There are currently police climbers in the tree.

‘Protesters in the tree have been warned that when they are removed from the tree and reach the ground they will be arrested for aggravated trespass.’

Up until today police 15 arrests and two people have been charged in relation to the HS2 protests at Jones’ Hill Woods.

Jack Hartcup, 30, from Norwich and Toni Bingham, 32, appeared at Reading Magistrates last Friday charged with breaching bail conditions and committing an offence under the Trades Union and Labour Relations Act.

In a bizarre statement released online, the Bean Can activists claimed their treetop protest was not about stopping HS2 or preserving the ancient woodland but ‘resistance to government and corporate greed’. 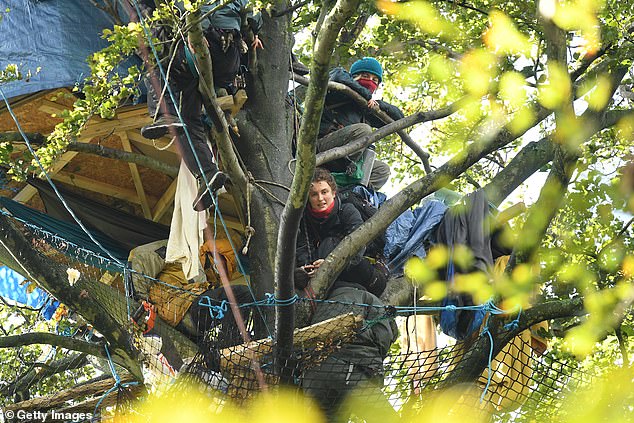 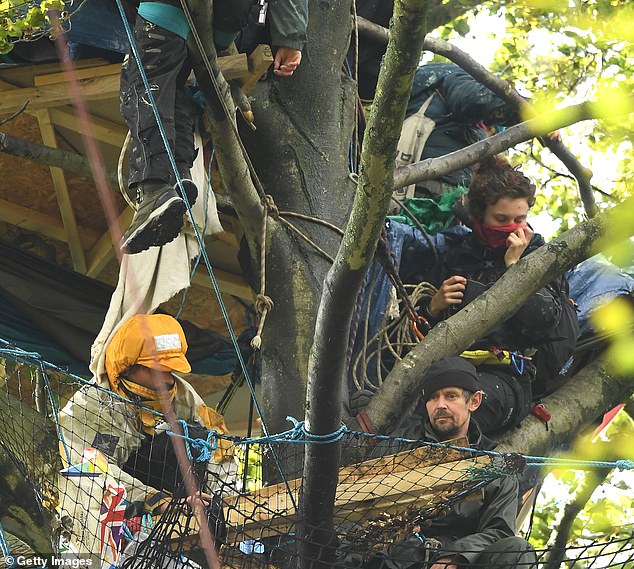 The activist, real name Daniel Hooper, had teamed up with an HS2 rebellion group trying to stop the destruction of ancient woodland marked for destruction 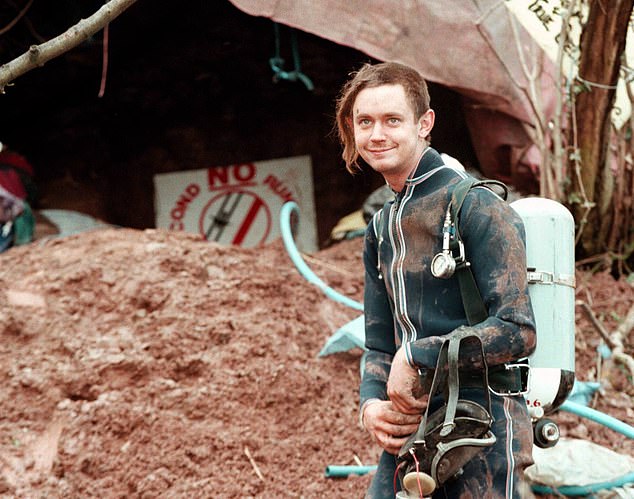 The son of middle-class Berkshire parents, Swampy became the poster boy for environmentalism in the 1990s. He is pictured at a Manchester Airport runway protest in 1997

In a statement issued from their treehouse, they wrote: ‘This is a statement from The Bean Can, the last remaining treehouse resisting the eviction in Jones Hill Wood.

‘The Bean Can is occupied by autonomous activists who are not affiliated with any particular organisation.

‘Firstly, we want to make one thing clear: this is not about a railway. This is not even about keeping the trees standing – these treehouses are a symbol of resistance.

‘This is a resistance to government and corporate greed, and profit for the rich being put before people and planet.

‘This is about the state prioritising corporate interests over welfare services and community – HS2 is a kick in the teeth to struggling communities after a decade of austerity.’