Up to four people have died after a Covid-19 outbreak on a cancer ward at an Edinburgh hospital, causing the department to be closed off as six more test positive.

NHS Lothian says it has discharged patients from its cancer ward at Western General Hospital in Edinburgh, but some are being kept in over the weekend.

The trust has not confirmed how many people have died after contracting coronavirus, but said it was fewer than five.

Dr Donald Inverarity, consultant microbiologist, NHS Lothian, said: ‘Our thoughts are with the family of the deceased and I would like to express our sincere condolences.

‘A multidisciplinary Incident Management Team was immediately established and all necessary infection control measures are in place.

‘The situation will continue to be reviewed and monitored very closely.’

Patients who would normally spend the weekend at home with family before returning to hospital on Monday are being asked to remain on the ward to reduce the risk of spreading the virus. 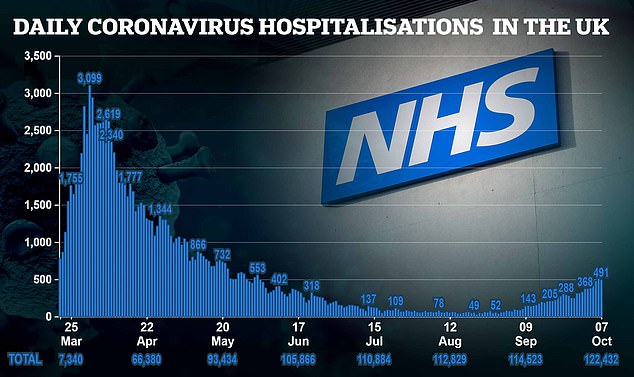 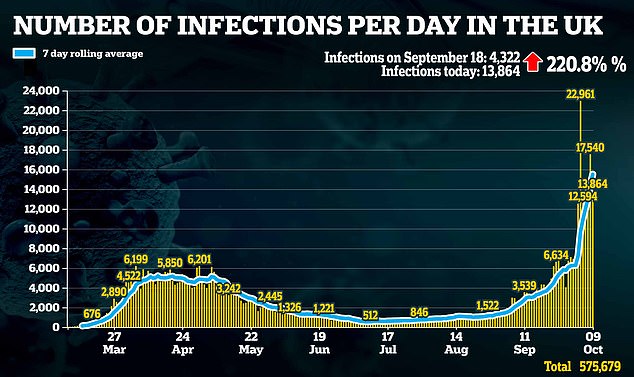 The health board’s Health Protection Team and the nationwide Test and Protect teams are carrying out contact tracing of visitors and outpatients, where necessary.

Routine Covid-19 screening of staff and patients is taking place as part of an enhanced regime.

Dr Inverarity said: ‘The enhanced outbreak testing regime allows us to identify staff and patients who have the virus before they become symptomatic.

‘That gives us the opportunity to introduce enhanced infection control measures and barriers sooner than we would previously have been able.

‘It allows staff to begin self-isolation and patients to be moved into cohorted groups before they become symptomatic, which in turn reduces the likelihood of passing on the infection to others.

‘Patient safety is our main priority and while we understand that the request not to go home for the weekend may be upsetting, it is necessary. 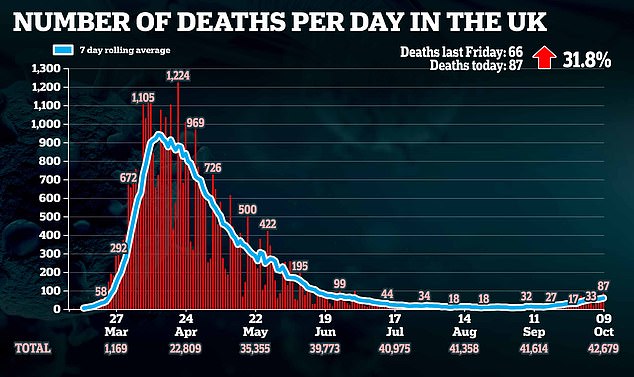 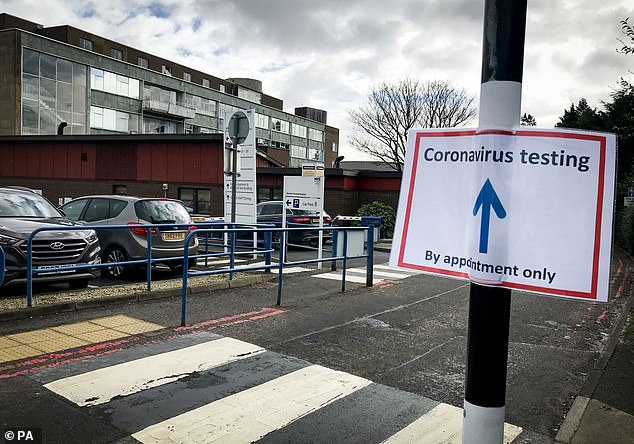 Patients are being kept on an oncology ward over the weekend at Western General Hospital in Edinburgh, which used for coronavirus testing at the start of the pandemic

‘It will help reduce the risk of onwards transmission and protect their families and the wider community. I would like to thank patients and their families for their co-operation and understanding.’

Rising coronavirus cases in Scotland saw a tightening of lockdown measures earlier this week, which will begin tonight.

From today, pubs are being asked to close at 6pm, with businesses being closed in parts of the country that are seeing the highest levels of infection.

Pubs, bars and restaurants have all been temporarily banned from selling alcohol.

Drinks can still be served until 10pm in outdoor areas but pubs and licensed restaurants in five health board areas across the central belt will be forced to close for 16 days as of this evening.

Establishments in Greater Glasgow and Clyde, Lanarkshire, Ayrshire and Arran, Lothian, and Forth Valley can only provide takeaways during this time with the temporary measures set to end on Sunday October 25.

Daily infections drop to 13,864 and the R-number could be down too but hat-trick of reports claim true figure may be 45,000 a day, infections DOUBLED in a week and outbreaks are growing in all but THREE areas

Britain’s daily coronavirus case count dropped today to 13,864 from more than 17,000 yesterday and official estimates of the R rate suggest the outbreak may be slowing in a ray of hope for the UK’s second wave.

But a hat-trick of reports warn the country is still on a precipice with up to 45,000 people catching it every day and fears the outbreak is ‘getting out of control’. 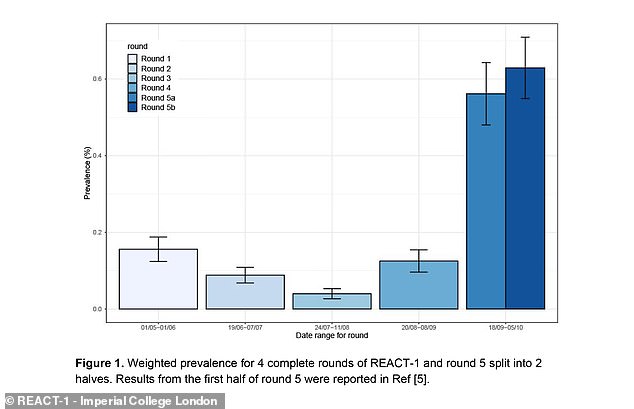 The Imperial College London-led REACT study estimates there were 45,000 new cases of coronavirus every day in England during the week ending October 5 – almost half the predicted rate of transmission during the darkest days of the crisis in April

Reports from the Office for National Statistics and Imperial College London, and Public Health England data from yesterday, however, show that cases were continuing to spiral out of control in England at the start of October.

As many as 45,000 people caught the virus on October 5, according to the results of one major government-run surveillance study which also pointed out that cases are growing twice as fast in the North of the country as they are in the South.

Another report by the ONS estimated 17,400 contracted the disease each day in England alone in the week ending October 1, which was double the number-crunching agency’s prediction last week. This is the highest estimate the ONS has given and puts the outbreak larger than it was in late April when data began.

And statistics published yesterday by PHE show that all but three areas of the country have had infection rates rise since last week. Of a total 149 local authorities, only Luton, Wolverhampton and Cornwall and the Isles of Scilly had a lower number of cases per person than last week.

Prime Minister Boris Johnson is expected on Monday to formally unveil plans to split the country into three tiers, with the worst-hit areas facing the harshest restrictions which may include closing pubs and restaurants to slow the spread of the disease.

But experts on the Government’s SAGE group fear the tier system will not be strong enough to get the virus under control and avoid a second wave. Some believe ministers should have pulled the trigger on a nationwide ‘circuit breaker’ lockdown in England two or three weeks ago when it was first discussed.

Scrutiny of the PM’s plans has only increased after Nicola Sturgeon imposed a two-week alcohol ban inside pubs and restaurants across Scotland, while closing bars entirely in coronavirus hotspots. The prospect of draconian rules being imposed across England has sparked a Tory backlash, with MPs demanding the Government set out in detail how areas subject to the tightest restrictions will be able to get them lifted.

Department of Health officials today also announced 87 deaths, up 31 per cent on the 66 recorded last week. But it is impossible to accurately compare today’s cases with what was recorded on either of the last two Fridays due to a Public Health England blunder that saw officials miss 16,000 positive coronavirus tests between September 25 and October 2. For comparison, 4,322 infections were announced on September 18 – the most recent Friday with comparable data. There were 17,540 new cases announced yesterday, October 8. 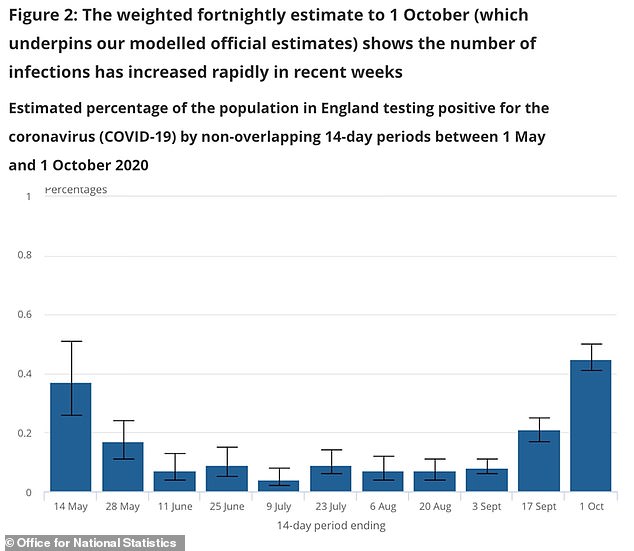 A report by the Office for National Statistics showed that more than 0.4 per cent of people in England were thought to be infected with Covid-19 in the week up to October 1, which was the highest estimate since the data began in May. It suggests that one in every 240 people has the disease, although this varies widely according to which part of the country people are in

Covid-19 hospital admissions are also still rising, with 491 newly-infected patients requiring NHS care on Wednesday – the most recent day figures are available for in England. This is up 50 per cent in a week (328) but down slightly on the day before (524). Almost three-quarters of all admissions are occurring in the North West, North East, Yorkshire and the Midlands, the data shows.

The ONS estimate suggests the Department of Health’s testing programme is now picking up most of the true number of cases, with it managing to diagnose 11,000 people on October 1 – 63 per cent of the ONS’s new cases prediction. But the Imperial College London research suggests it is only spotting 29 per cent of all infections.

But the estimates are still a far cry from what Britain was recording the darkest days of the pandemic in March and April, when scientists believe the true figure was at least 100,000 each day. Some academics have even estimated that as many as 350,000 people caught the disease on March 23 – when the lockdown was imposed.

Meanwhile the Imperial REACT study also shows that cases are doubling twice as fast in England’s Northern regions as they are in the rest of the nation – it estimated the national doubling time is 29 days but said it was more like 13 days in Yorkshire, 14 in the West Midlands and 17 days in the North West. It may even be shrinking in London, the researchers added, in part because of immunity developed in the first wave. And they claimed the R rate in the capital could be below the dreaded number of one. 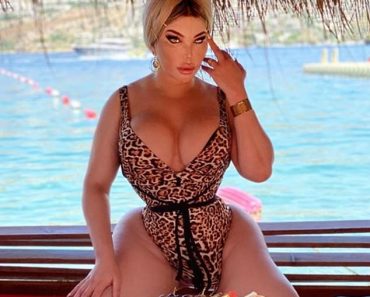 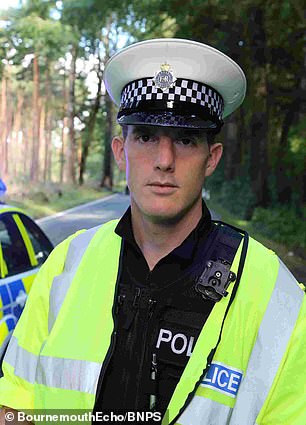