Veteran eco-warrior Swampy has been charged with aggravated trespass after being hauled by police from a 26 metre high tree house on the proposed route of the High Speed 2 rail line.

He and seven other protesters had set up camp in The Beech tree in the 1.8 hectare Jones’ Hill Wood, between Wendover and Great Missenden, in the Chiltern Hills in Bucks.

Specially-trained climbing police officers in riot gear clambered up the tree to bring them down yesterday.

The activist Swampy, real name Daniel Hooper, has been charged with aggravated trespass after being hauled by police from a 26 metre high tree house on the proposed route of the High Speed 2 rail line 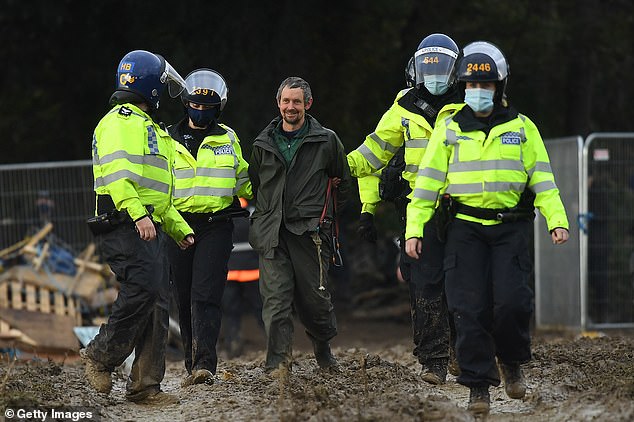 He and eight other protesters had set up camp in The Beech tree in the 1.8 hectare Jones’ Hill Wood, between Wendover and Great Missenden, in the Chiltern Hills in Bucks 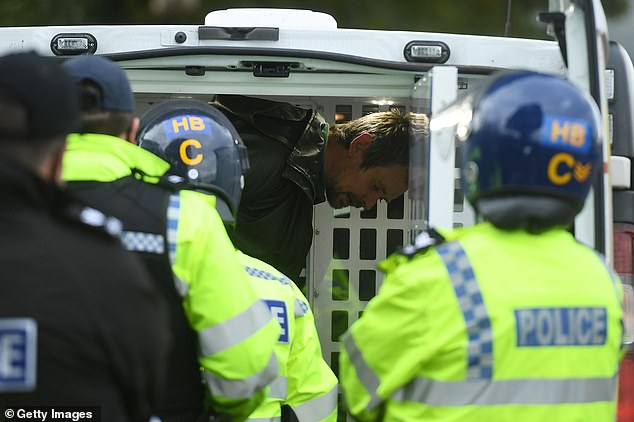 Jones’ Hill Wood – which the demonstrators are fighting to protect from HS2 – was the inspiration for Roald Dahl’s children story Fantastic Mr Fox and has become a symbol of the fight against the high speed line.

Swampy – real name Dan Hooper – fought off officers as they tried to grab him yesterday, with brawls breaking out with the police as they forced protestors out of the camp which has been dubbed the ‘Bean Can’.

The 47-year-old, from Wendover, was charged alongside four others today with aggravated trespass. Three others were also charged.

All eight have been released on bail and will appear in High Wycombe Magistrates’ Court in November.

Among the group were demonstrators using the nicknames Scrap, Peahead, Pigeon, Sky, Satchel and Biscuit.

His co-defendants include Alice Crawshawe, 21, from Manchester and Veronica Tombolan, 23, Anne Kahn, 22, and Ella Russell, 25, all from Buckinghamshire. 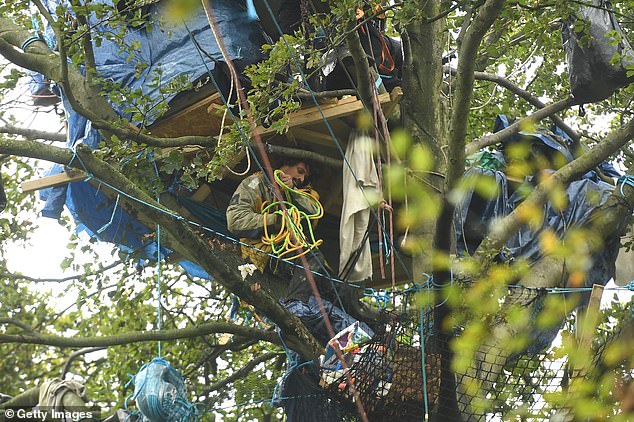 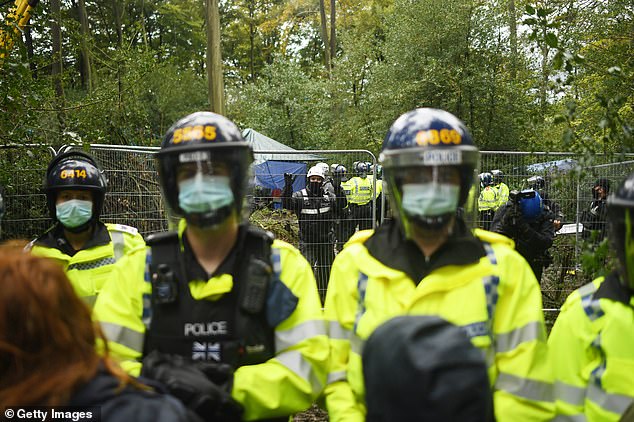 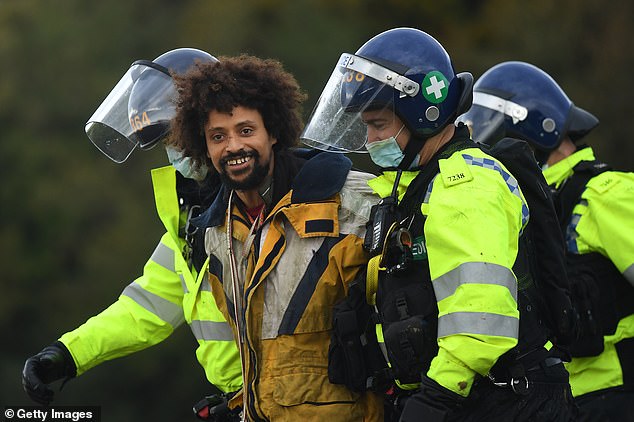 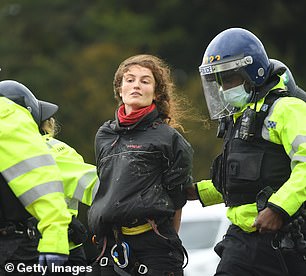 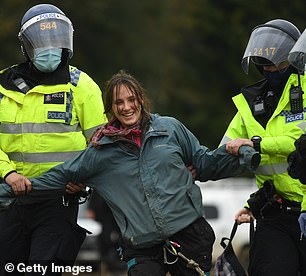 Richard Fox, 29, from Plymouth, was charged with obstructing and resisting a constable in execution of duty and will also appear in court in November.

Dana Patel, prosecuting, said the two men had been bailed on the condition that they did not interfere with the workings on an HS2 site.

However Mr Masters was found not to be in breach after his lawyer Audrey Mogan argued no workers were present at the time the protesters were removed.

She also successfully argued that Mr Harewood, 30, was also not in breach because the address he had previously given the court was the treehouse, where he had lived for the last three months.

Both were bailed and due to appear in November, charged with aggravated trespass.

At about midday yesterday, police officers clambered up to the treehouse – where all eight activists have been staying for at least a week – and began taking it apart.

The 1.8-hectare beech wood, one of 108 ancient woodlands that are scheduled to be destroyed along the HS2 route, is considered a habitat of principal importance and home to bats, badgers, tawny owls, and foxes. 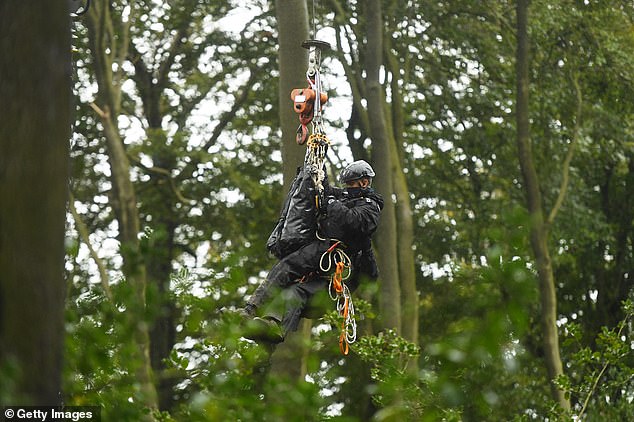 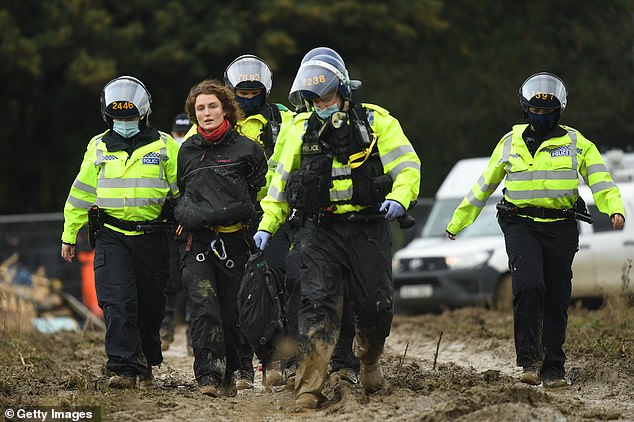 Parts of the surrounding Chiltern countryside are also under threat from the controversial HS2 project.

On Wednesday, Swampy’s 16-year-old son Rory joined him in the treetop protest, but he was not believed to have been there when it was dismantled.

The son of middle-class Berkshire parents, Swampy became the poster boy for environmentalism after he became involved in the protests against the A34 Newbury by-pass in 1996. 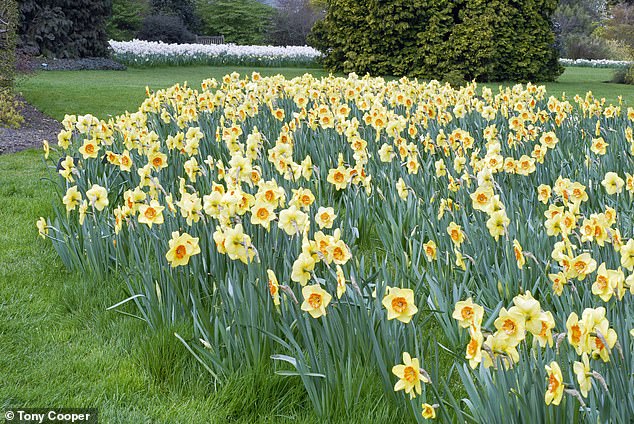