Eat out to help out! Fox and hedgehog are caught on camera sharing a roast chicken dinner in delighted wildlife lover’s back garden

This is the comical moment a hedgehog and fox share a late night roast chicken dinner.

Wildlife lover John-Paul Jones, 50, from Whitchurch, Cardiff, was able to capture the unlikely dinner companions tuck into the feast on a motion-activated security camera in his garden.

The father-of-three, who first started leaving treats out for animals after spotting an abundance of wildlife in his back garden, said he ‘could not believe it’ when he saw the two animals indulging in the meal at the same time.

Wildlife lover John-Paul Jones, 50, from Whitchurch, Cardiff, was able to capture the fox watch the hedgehog tuck into the roast chicken dinner on a motion-activated security camera

During the clip, which was filmed on October 6, the hedgehog tucks into the roast chicken when the fox quickly takes a piece of the meal.

The hedgehog jumps before continuing to eat the roasted chicken in the back garden.

Mr Jones later said: ‘I left the chicken out raw overnight and nothing touched it so the next morning I took it back in, roasted it and put it out again.

‘I couldn’t believe it when the hedgehog and the fox were eating it at the same time.’

The wildlife lover has previously left chicken, duck, and cheese out for the animals in his garden.

He continued: ‘They eat better than me.

‘I left a quartered chicken out once and the camera caught the fox just lazily licking at the plate for ages after it was gone. 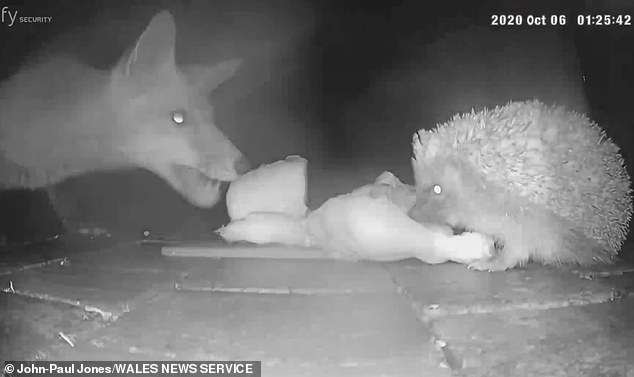 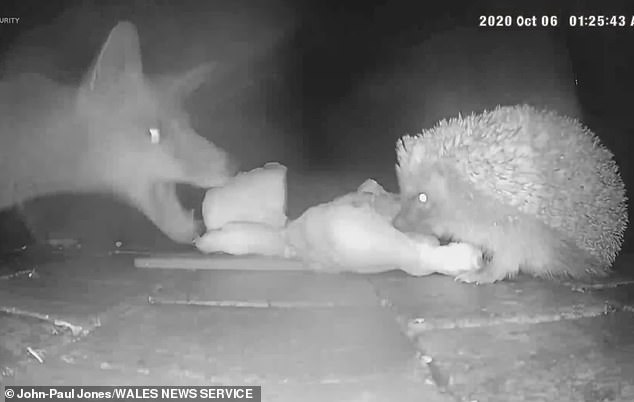 Mr Jones, who filmed the footage on October 6,  said he ‘couldn’t believe it’ when he saw the creatures eating it at the same time

‘I fed the hedgehog cheese once and I googled it after because I wondered if it was the right thing to do and I read that they could suffer from quite bad wind – I thought ‘oh no I’ve got a farting hedgehog’.’

Mr Jones posted the footage on the Save the Northern Meadows Facebook group which objects to plans to build a new cancer hospital on greenfield land in Whitchurch.

He said: ‘The meadows are a tremendous source of wildlife and it would be devastating if they are lost.

‘We’re not against the hospital being built but there are far more appropriate brownfield sites available.

‘We’re calling for an independent inquiry into the model that has been proposed.’

After sharing the comical footage online, some social media users shared their praise for the heartwarming scenes.

One user wrote: ‘Awh love them. What are they eating?’

While another added: ‘Whatever it was, it looked like they were enjoying it.’ 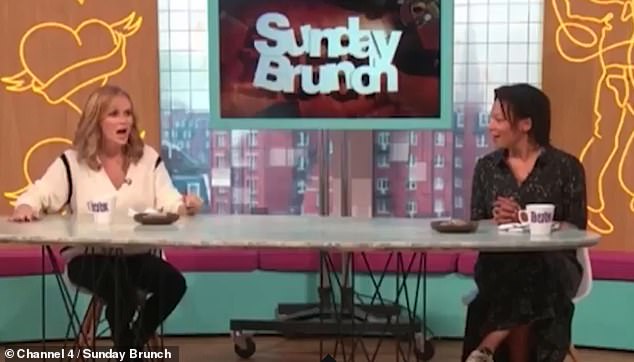