Shares in Rolls-Royce have almost doubled in five days, capping off its best week since listing in 1987.

On October 1 the jewel in Britain’s engineering crown announced plans to raise £5billion – with £2billion of it from investors – to survive the Covid crisis.

The news triggered a sharp fall in shares. But after a weekend spent digesting the news, traders regrouped and bargain hunters swept in, causing the aircraft engine-maker’s stock to a jump 96.5 per cent since Monday.

Turning the corner: After slumping during the pandemic, Rolls-Royce shares have jumped 96.5 per cent since Monday

It was widely reported that the Government is planning to plough up to £2billion into a Rolls-led project to build mini nuclear power stations, while the Capital Group Companies upped its stake from 7.9 per cent to 8.7 per cent.

And although Berenberg brokers cut their price on its stock from 270p to 250p, this is still above the current level. 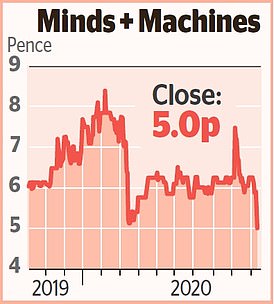 Shares in Minds + Machines Group tumbled 15.3 per cent, or 0.9p, to 5p after it opened an investigation into a possible accounting error.

The company, which sells internet domain names and offers other related services, said the probe centred around whether revenue from a contract last year had been ‘correctly recognised’.

There could be other drivers, however, with CMC Markets analyst David Madden saying ‘there is increasing speculation about a takeover bid’.

Any such bid would be heavily scrutinised by ministers and could be blocked thanks to the Government’s ‘golden share’ in Rolls.

But it was the junior market that caught investors’ eyes yesterday.

At the close on Thursday the AIM all-share index surpassed its pre-Covid year-high of 975.18, meaning it has clawed back losses since the crisis hit in February, and then some.

Scott Knight, head of audit at bean-counter BDO, said the index has ‘proved to be remarkably resilient and adaptable’ this year.

It has been boosted by stratospheric pharmaceutical company rises during the pandemic. This includes Covid test maker Novacyt, which surged 15.5 per cent, or 118p, to 880p to hit a new high. It has risen by 6,739 per cent this year.

Elsewhere on the junior market, esports tournament organiser Gfinity was one of the largest gainers on AIM after it hoisted a for-sale sign above the business following a review. Shares closed 20.9 per cent up, rising 0.7p, to 4.05p.

Biffa has bought a company that specialises in collecting waste from businesses such as pubs, restaurants and offices, for £35million.

Simply Waste Solutions operates in west London, Oxfordshire and Bristol. Biffa shares buffed up by 2.9 per cent, or 6.5p, to finish at 234p.

Russian gold miner Petropavlovsk, however, went the other way. It fell 4 per cent, or 1.3p, to 31.4p, after slashing forecasts for the amount of gold it will dig up this year and delaying the start of a key project until next spring.

Magnum and Persil owner Unilever rose 0.7 per cent, or 34p, to 4847p after a Dutch legal body said it was probably not ‘legally sustainable’ to slap it with a one-time ‘exit tax’ over its plan to merge the company into a single headquarters in London.

British Land advanced 3.1 per cent, or 11.3p, to 378.6p as it resumed dividend payments and said London’s office market is reviving. It has been paid 91 per cent of the rent due from office tenants.

And Aston Martin shares revved up by 2.9 per cent, or 1.45p, to 52.2p after four-time Formula One world champion Sebastian Vettel said he has a stake in the luxury car maker, but refused to say how big it was. 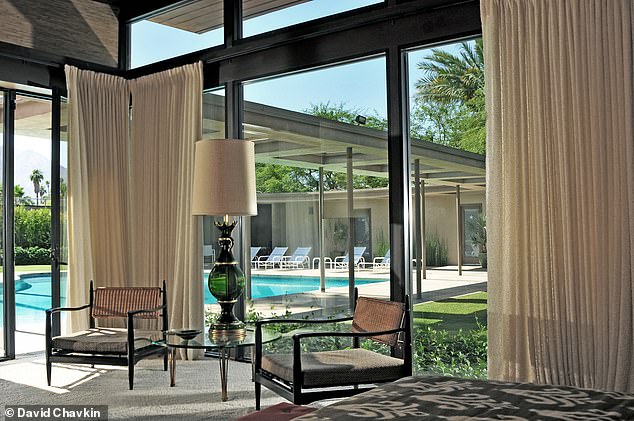