With miles of sandy beaches battered by Atlantic breakers, the rugged coastline of North Cornwall is a jewel in the crown of the British seaside.

Today, its picturesque fishing villages and bustling towns are famous for surfing, posh food and crowds of even posher visitors.

But locals and tourists alike have found a disturbing new tide washing up on the pristine beaches in recent weeks – hundreds, if not thousands, of disposable face masks, plastic gloves and other detritus, all generated by Covid-19.

Marine biologist Emily Stevenson, 23, (pictured) who runs the Beach Guardian charity, shows some of the plastic masks picked up on Cornwall’s coastline.

With attempts to ban single-use plastics seemingly on hold amid the coronavirus crisis, Britain is drowning in an ocean of dirty and discarded personal protective equipment.

No one knows this better than marine biologist Emily Stevenson, 23, who has been cleaning beaches with her family for more than a decade.

With her father Rob, she organises clean-ups with volunteers along the seven picturesque beaches between Padstow and Newquay, including popular surfing spot Constantine Bay.

In the past two months alone, Emily and her Beach Guardian charity volunteers have picked up 650 plastic gloves and more than 250 face masks from this short stretch of coast. With Covid-19 set to remain with us for some time, the problem will only intensify.

‘PPE waste is everywhere,’ she says. ‘We’re finding on average five to ten masks on every clean.’ 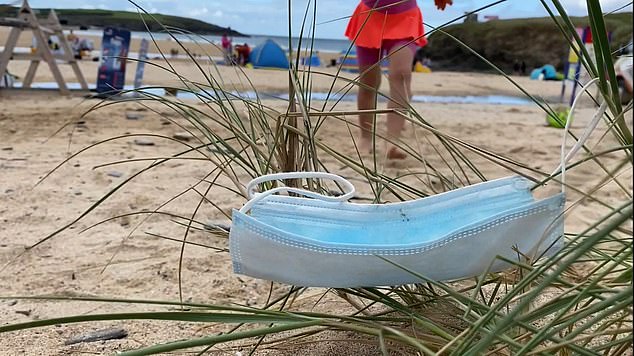 In the past two months alone, Beach Guardian charity volunteers have picked up 650 plastic gloves and more than 250 face masks on one short stretch of coast

Many masks have fine layers of plastic, including non-recyclable polypropylene, polyethylene and vinyl.

Even when disposed of correctly, they will end up in landfill or be incinerated, releasing toxic fumes.

‘Left in the ocean, they will take an estimated 450 years to degrade.

‘We’re finding more on our beach cleans than we are anywhere else,’ says Emily.

‘This is really frightening because it’s that final point of contact before it goes out into the ocean. If it’s not picked up now, it probably never will be.

‘When a mask is dropped on the ground or blown out of a car door, it can easily find its way to the sea.

‘Washed down into a drain by rainfall, it will travel into a river and flow down to the estuary, where it will be swept out to sea or eventually be washed up on a beach.’ 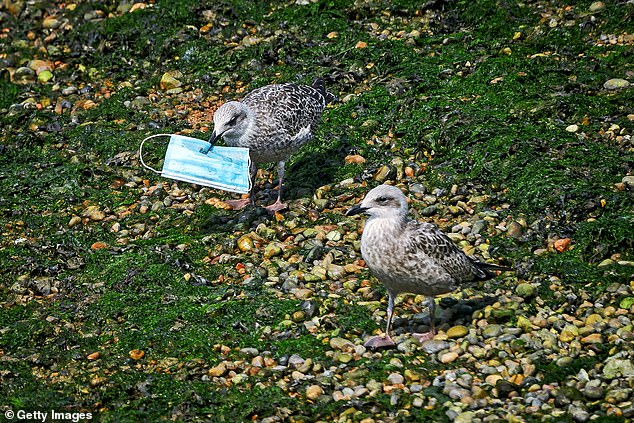 Deadly diet: A gull tries to eat a plastic face mask on the shore. The RSPCA has published pictures of a gull with a mask wrapped so tightly around its leg it had caused swelling

Hayling Island in Hampshire lacks the charm of Padstow, but the story is just the same when it comes to PPE.

There, among the seaweed and pebbles on a popular peach, are the tell-tale glimpses of pale blue – a plastic glove followed a few seconds later by a face mask.

The Mail on Sunday joined Lissie Pollard and Bianca Carr of the Final Straw Foundation, who spend hours every week clearing litter from the shoreline.

Facing west over Langstone Harbour towards Portsmouth, about three miles away, this stretch of beach – a popular spot for dog walkers, bird watchers and water sports fans – is only 600 yards long.

But our buckets soon fill up with discarded masks and gloves. 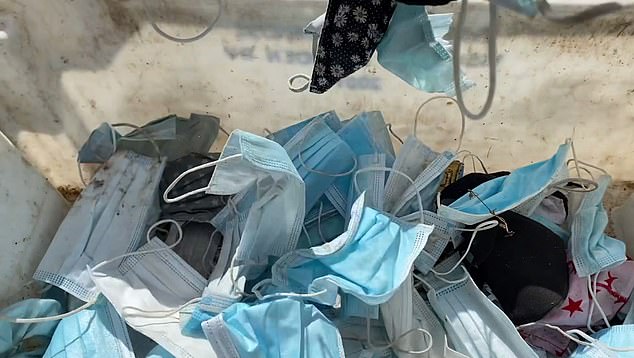 Global conservation group WWF estimates that if one per cent of masks are not properly disposed of, 10 million masks a month could end up in the environment

‘But now we estimate that something like 20 per cent of what we pick up is PPE.’

Bianca adds: ‘It first started appearing about two months after lockdown started. When we were finally allowed out of the house for more than an hour, we went to the beach and noticed the masks and the gloves.

‘What we’re seeing now is the tip of the iceberg. There must be countless items out there.’

Laurent Lombard, a founder of the French non-profit Operation Mer Propre (Operation Clean Sea) has said that ‘soon there may be more masks than jellyfish’ in the Mediterranean. Few doubt him, or the damage they can cause. 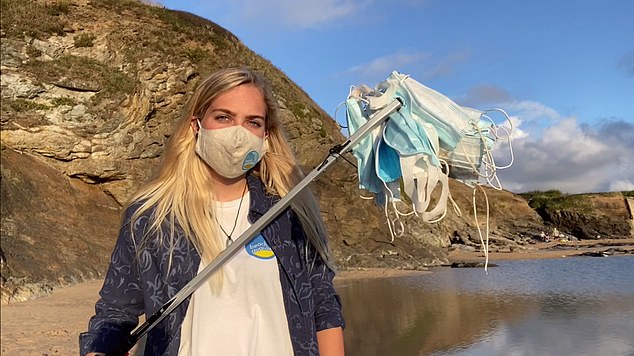 With attempts to ban single-use plastics seemingly on hold amid the coronavirus crisis, Britain is drowning in an ocean of dirty and discarded personal protective equipment

Global conservation group WWF says that if only one per cent of masks was not properly disposed of, then about ten million masks a month would end up in the natural environment. That’s about 88,000lbs of plastic.

It’s not merely unsightly, the Covid plastic can easily be swallowed by sea creatures.

The plastic fills the stomach, reducing feelings of hunger and causing the animal to weaken, ending in a slow and painful death.

Large pieces can block the intestines, while smaller bits can be scattered when excreted, putting even more animals at risk.

The elastic straps that secure disposable masks are particularly hazardous for wildlife, which can easily become tangled in the loops.

The RSPCA has published pictures of a gull with a mask wrapped so tightly around its leg it had caused swelling.

Even when the virus is eventually contained, it seems the effects of Covid-19 will be with us for generations to come.