President Donald Trump has said that he is no longer taking steroids, but could not confirm that he has tested negative for coronavirus since becoming infected last week, even as he plans to hold an event with hundreds of people at the White House on Saturday.

‘I feel really, really strong,’ Trump said in an interview with Fox News contributor Dr. Marc Siegel, which was pre-taped but aired on Friday night on Tucker Carlson Tonight.

The opening segment of the interview, which was Trump’s first on-camera since testing positive for the virus, was framed as a kind of mock medical exam, with Siegel, who is a practicing physician, asking Trump about his ‘chief complaint.’

Trump went on to say that he was no longer taking the powerful steroid Dexamethasone, which some medical experts had warned can have psychological side effects including confusion and aggression.

‘I tolerated it very well, I don’t take it anymore. It was pretty short term,’ Trump said of the steroid, which the CDC recommends for treating coronavirus only in cases where a patient is admitted on supplemental oxygen or requires ventilation.

‘I feel really really strong,’ Trump said in the interview with Fox News contributor Dr. Marc Siegel, which was pre-taped but aired on Friday night on Tucker Carlson Tonight 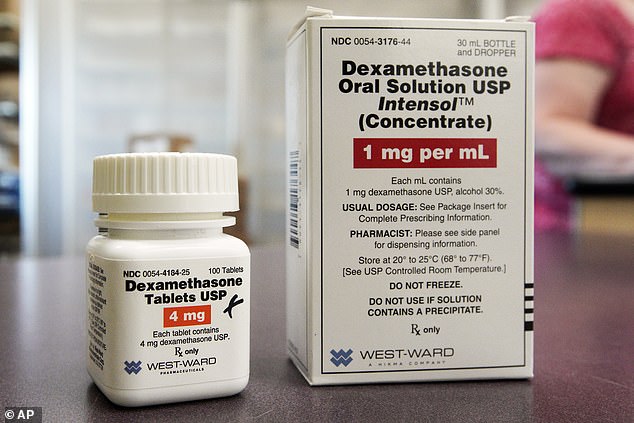 Trump said he was no longer taking Dexamethasone, which some medical experts had warned can have psychological side effects including confusion and aggression (file photo)

Asked what drugs he was on, Trump first said ‘right now I’m medication free, I’m not taking any medications as of eight hours ago,’ adding ‘which frankly makes me feel good, I don’t like medication.’

However, when asked a second time what medications he was taking on Friday, Trump hedged, saying ‘I think pretty much nothing.’

On Thursday, Trump said he would be re-tested for COVID-19 on Friday to see if he still had detectable levels of the virus following his apparent speedy recovery.

‘I have been retested. I haven’t even found out numbers or anything yet,’ Trump said of Friday’s test. ‘I know I’m either at the bottom of the scale or free.’

It was unclear when the interview, which Carlson said was filmed by a White House camera crew, was taped.

He said he did not know when his next test would be, adding that it was “probably tomorrow… they test every couple of days.”

Siegle also asked about the results of scans of Trump’s lungs for any damage, a key test that has not been publicly revealed by his doctors.

‘Initially it had some congestion in there but ultimately it tested good and with each day it got better,’ he went on, without going into further detail. 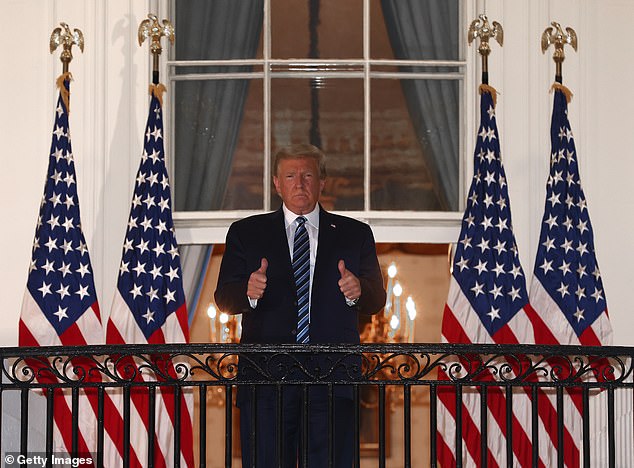 Siegel asked Trump what his two most prominent symptoms were when he was hospitalized at Walter Reed National Military Medical Center on Friday.

Trump said he did not know where he had contracted the virus, adding: “It’s highly contagious. That’s one thing you learn, this is a contagious disease.”

It follows the release on Thursday of a memo from White House physician Dr. Sean Conley saying that it would be safe for Trump to return to public engagements as soon as Saturday.

Trump will hold a public gathering on the White House South Lawn on Saturday with hundreds of people for his first event since being diagnosed with the coronavirus and then will travel to Florida on Monday for a campaign rally, the White House said late Friday.

The president will keep his distance from Saturday’s crowd and is expected to speak from one of the balconies at the White House to the group on the South Lawn – two weeks exactly after his superspreader event in the Rose Garden. 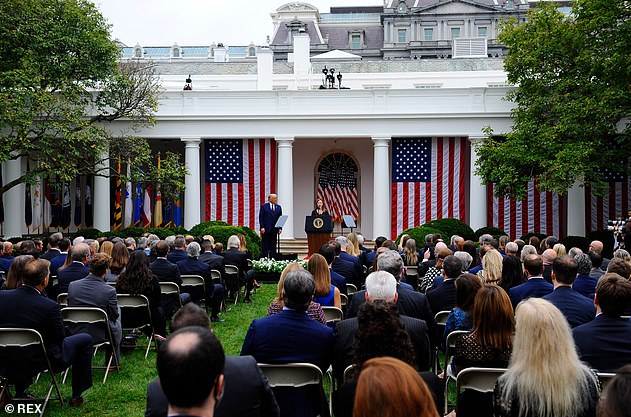 There will be no tests and although attendees will be ‘instructed’ to wear masks it was unclear if the rule would be enforced. It is so far unclear if Trump is still contagious because of the White House’s refusal to say when he last tested negative.

Saturday’s event will feature ‘remarks to peaceful protesters for law and order’ by the president, according to an invite obtained by ABC News. It will happen in conjunction with a previously planned event organized by Trump supporter Candace Owens’ group Blexit, a campaign to urge Black Americans to leave the Democratic Party.

‘This will consist of a temperature check and a brief questionnaire. The health and safety of all attendees is our priority and following CDC guidelines is strongly encouraged,’ a source with knowledge of the group’s planning told DailyMail.com. There was no mention of social distancing.

Then, on Monday, President Trump will go to Sanford, Florida, for a Make America Great Again campaign rally, his re-election campaign announced.

His last rally was in Bemidji, Minnesota, and CBS News reported Friday that there are so far nine positive cases linked to it, with two people in the hospital. 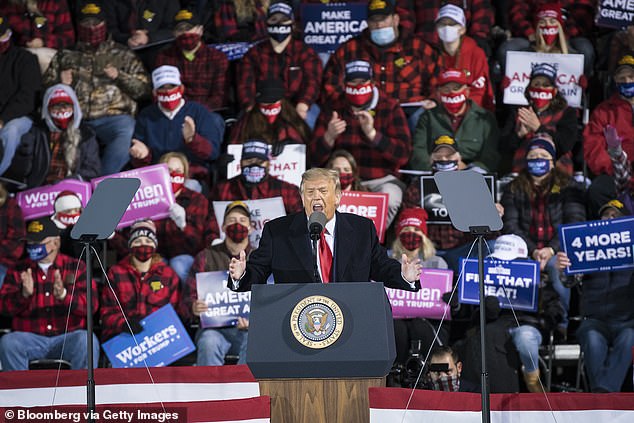 President Trump will go to Sanford, Florida, on Monday, for a Make America Great Again campaign rally that he was originally scheduled to go to Sanford on the Friday he tested positive for COVID; above Trump speaks at rally in Minnesota on September 30 – his last before his COVID diagnosis

Trump has been restless and eager to get back to the campaign trail after being sidelined with COVID.

But scheduling massive events with supporters will find Trump facing questions about his treatment of people’s health at time he’s being criticized for having a cavalier attitude about the pandemic, which has killed more than 200,000 Americans.

The two events were scheduled after Trump’s physician, Dr. Sean Conley, stated in a update late Thursday that Trump’s medical team felt that he would be safe to return to public engagements by Saturday.

Most scientists think that viral shedding continues for about 10 days after symptoms start in mild to moderate cases, according to the Centers for Disease Control and Prevention.

The Rose Garden, just off the South Lawn, was the site of a superspreader event in late September when Trump announced the nomination of Judge Amy Comey Barrett to the Supreme Court.

The September 26 gathering attracted around 100 people – many of them not wearing face masks; all sitting close.

THE TOLL OF COVID FROM SCOTUS NOMINEE EVENT

* Bill Barr, 70: self-isolating out of caution.

AT EVENT AND STOOD AT BACK OF ROSE GARDEN 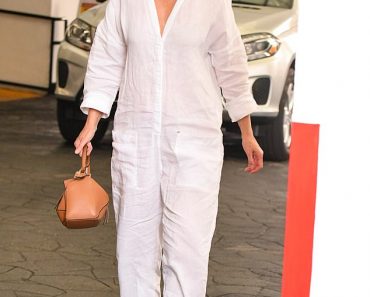 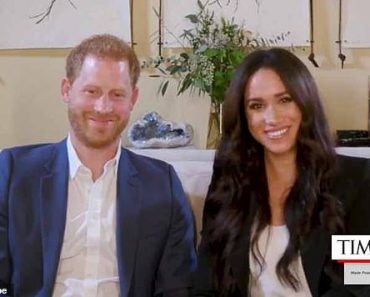 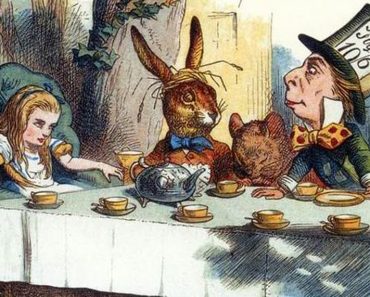