Fourteen years and 10 days after Michael Schumacher won the last of his 91 races – a target as distant as the moon – Lewis Hamilton equalled the giant tally with victory at the Eifel Grand Prix.

On a cold, grey day in the mountains of western Germany, Hamilton secured his spot in history.

Watching on was Michael’s 21-year-old son Mick, an aspiring F1 driver who currently leads the F2 standings. Sadly, as the world knows, Michael is confined to a private life of glacial convalescence after the skiing accident that robbed him of his vitality nearly seven years ago.

Lewis Hamilton stormed to victory at the Eifel GP to take his 91st win in Formula One, matching Michael Schumacher’s record 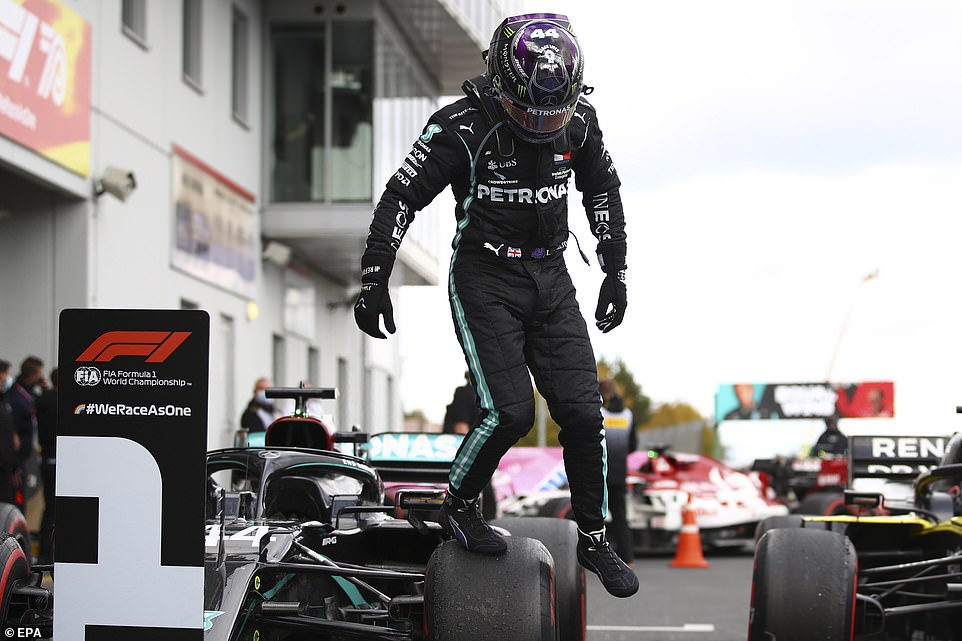 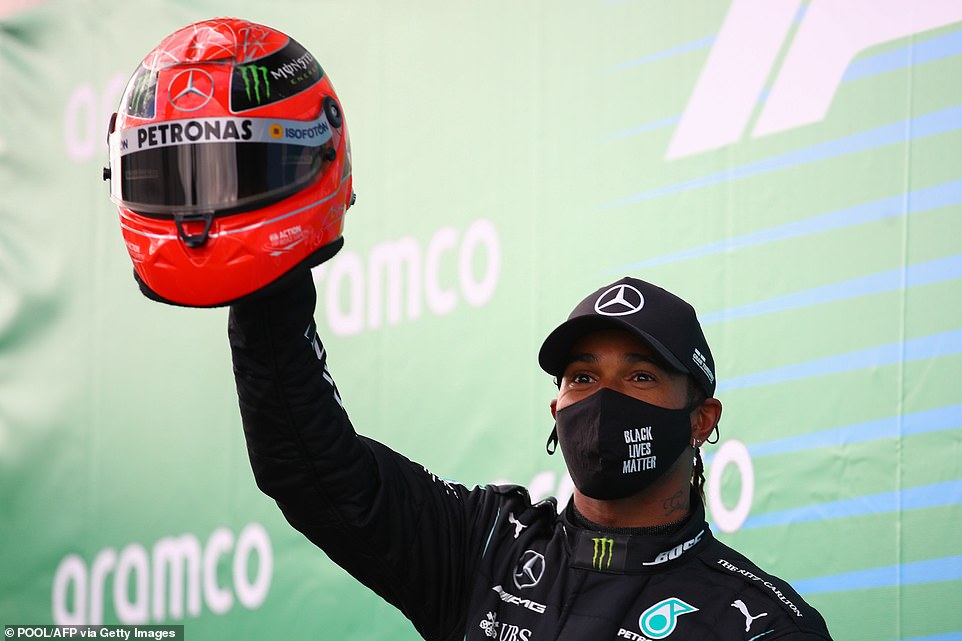 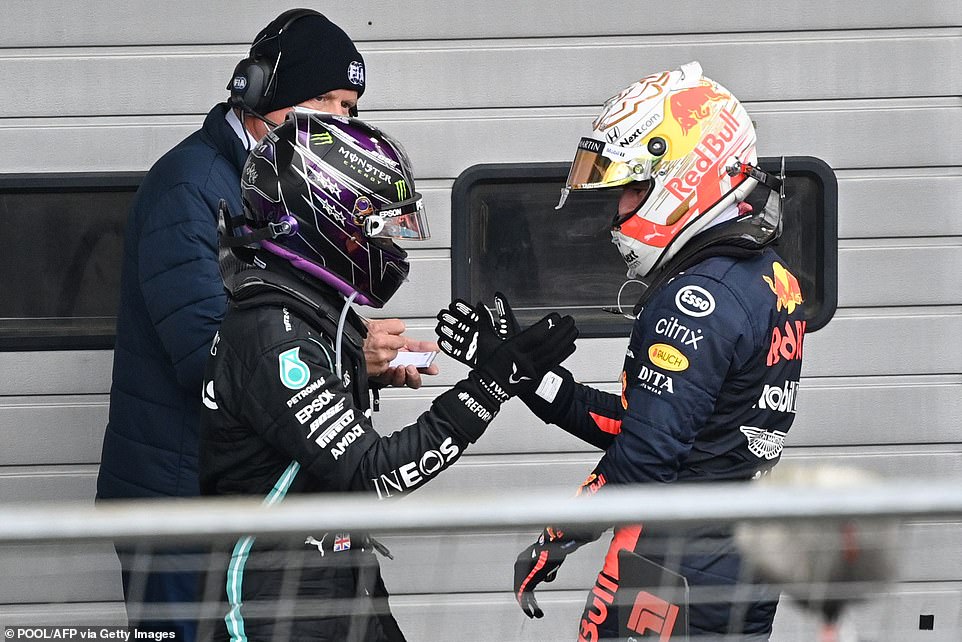 When Schumacher was an automaton of success, he almost destroyed the sport by his brilliance. Certainly, many thought his 91 victories would never be broken. But here was Hamilton, a boy from Stevenage, who in 14 seasons has matched the seemingly matchless in 261 grands prix.

He will also, surely, go level with Schumacher on seven world titles before the campaign ends in Abu Dhabi on December 13. He leads Mercedes team-mate Valtteri Bottas by 70 points with 11 of the 17 rounds completed.

Lewis first burst across our horizons in 2007 with a bravura opening corner in Melbourne on a debut that betokened all the mould-breaking that was to follow. 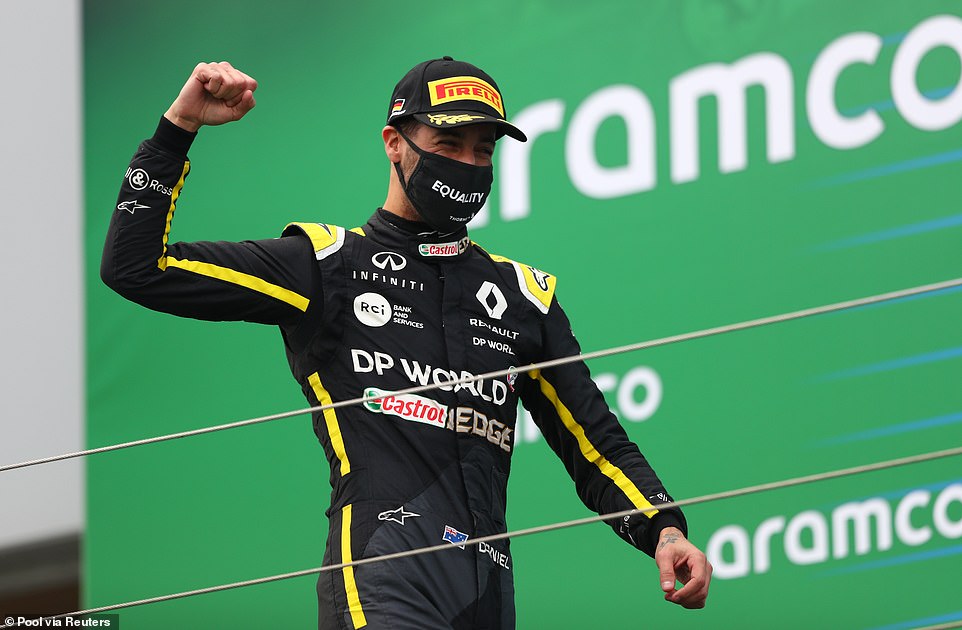 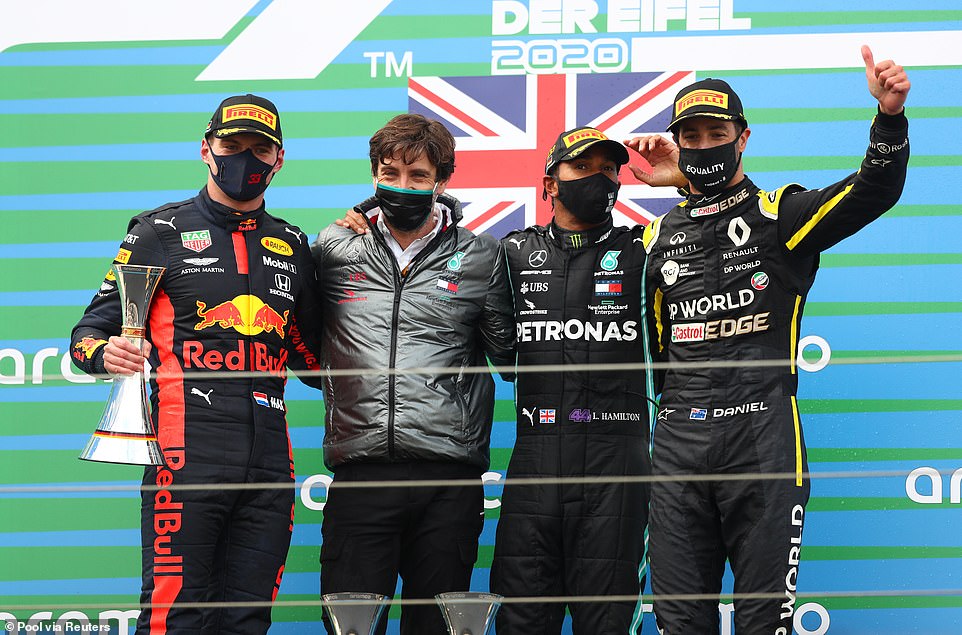 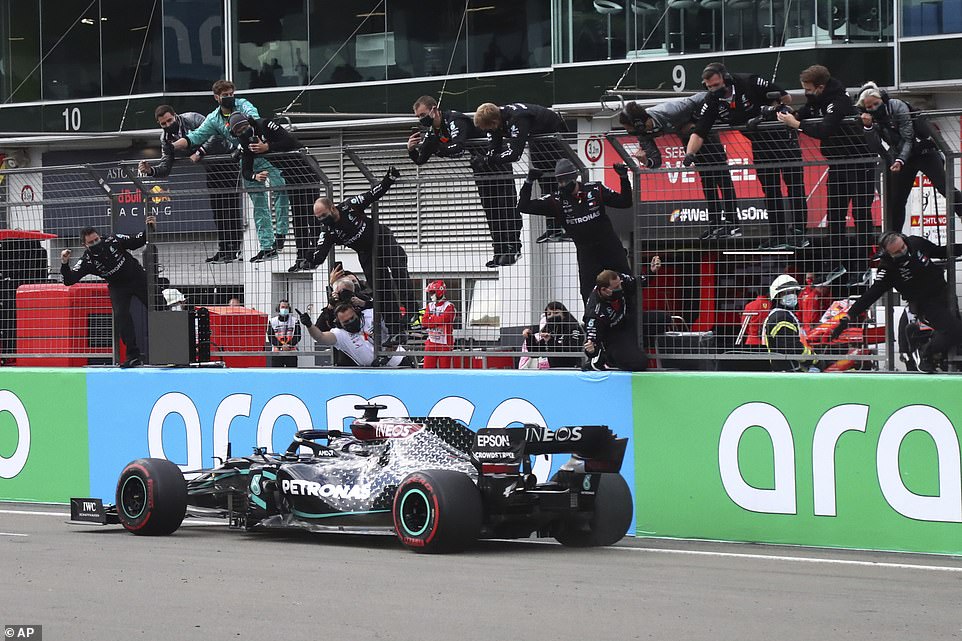 And here at the Nurburgring the victory was mostly simple, despite starting second behind Bottas.

Hamilton pressed the Finn hard, out-braking him into the first corner, but Bottas for once jagged his elbows out, and re-established his advantage on the inside of the second bend.

Hamilton’s chance came on lap 13. Bottas locked up at Turn One and ran wide. The Briton pounced, taking ownership of the race that he was never to relinquish.

His task on this spine-tingling, breath-shortening afternoon of opportunity – with the temperature just 8C – was made easier when Bottas announced over the radio a loss of engine power, a precursor to his retirement a few moments later. 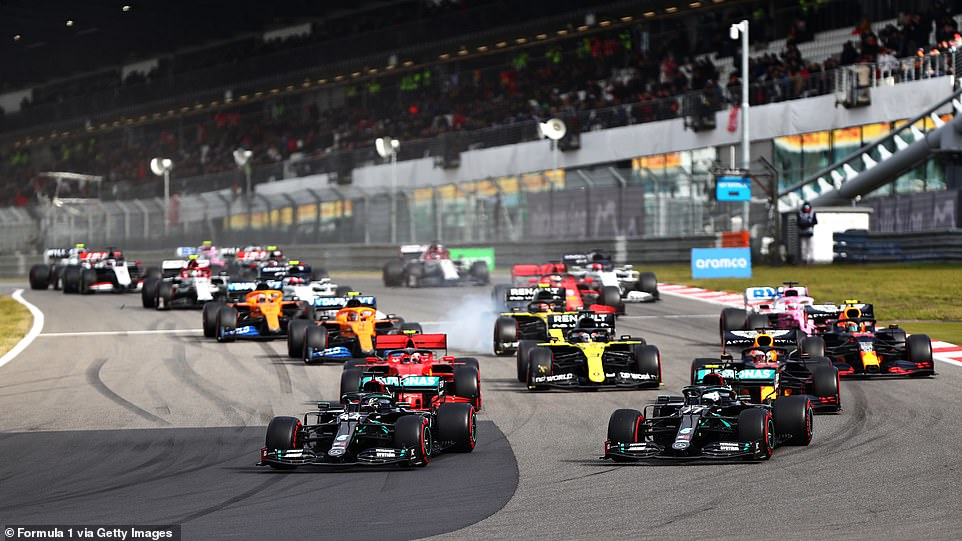 Hamilton (left) got a good start to edge ahead of Bottas into turn one, only for the Finn to emerge in front 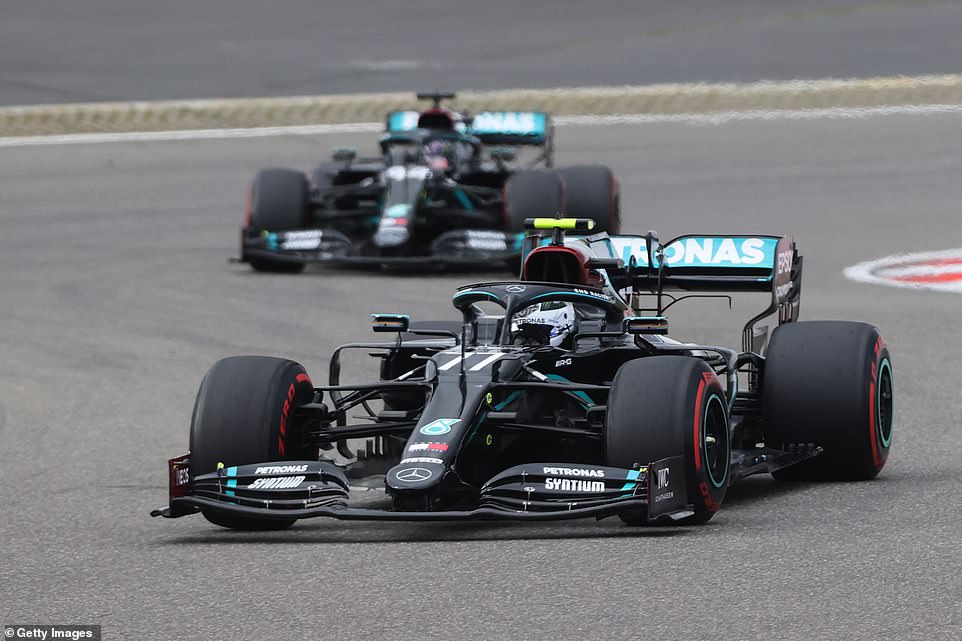 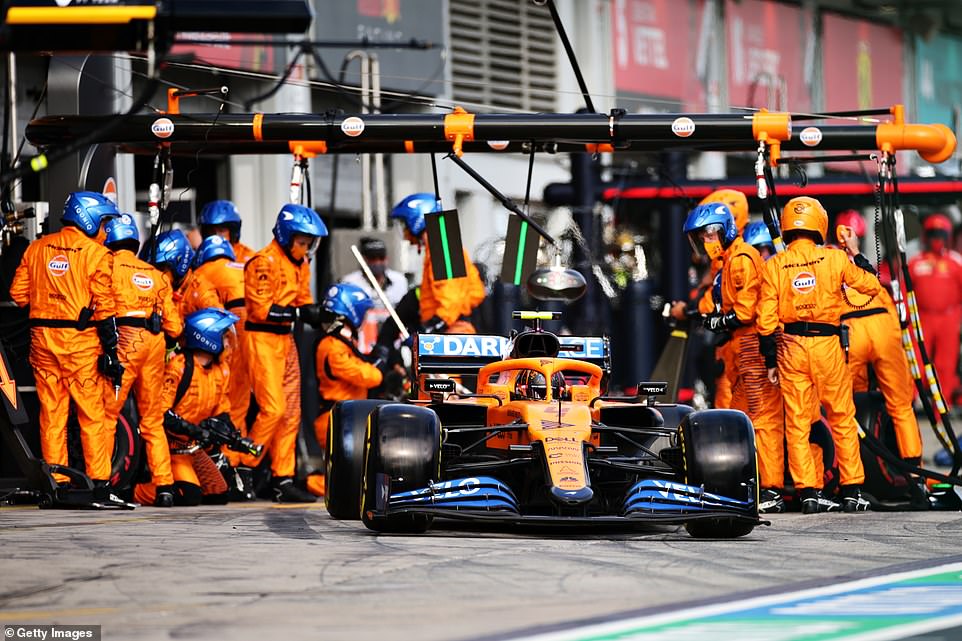 Red Bull’s Max Verstappen, a talent who might, just possibly one outlandish day, challenge the new peaks Hamilton will set for the sport, finished second. The Dutchman is driving brilliantly, outperforming his car. He is just 23. Hamilton made his debut at 22, yet Verstappen is already into his sixth season.

Daniel Ricciardo, a friend of Hamilton, finished third for Renault.

Some 13,500 fans shivered their timbers and applauded Hamilton in the German car for drawing level with Schumacher, the absent hero who was born and developed his art as a karter at Kerpen 53 miles north of where this action was unfolding. 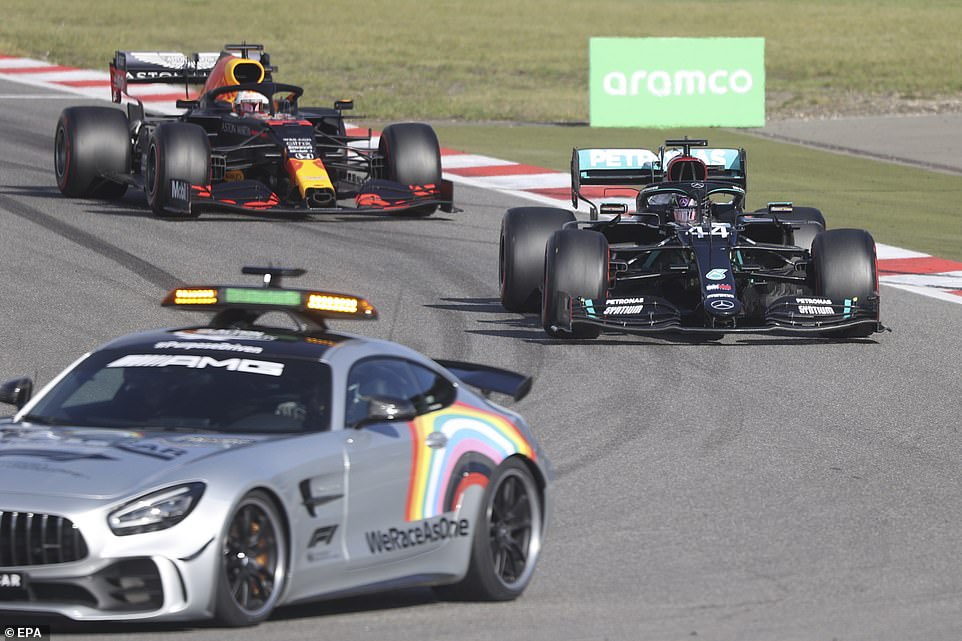 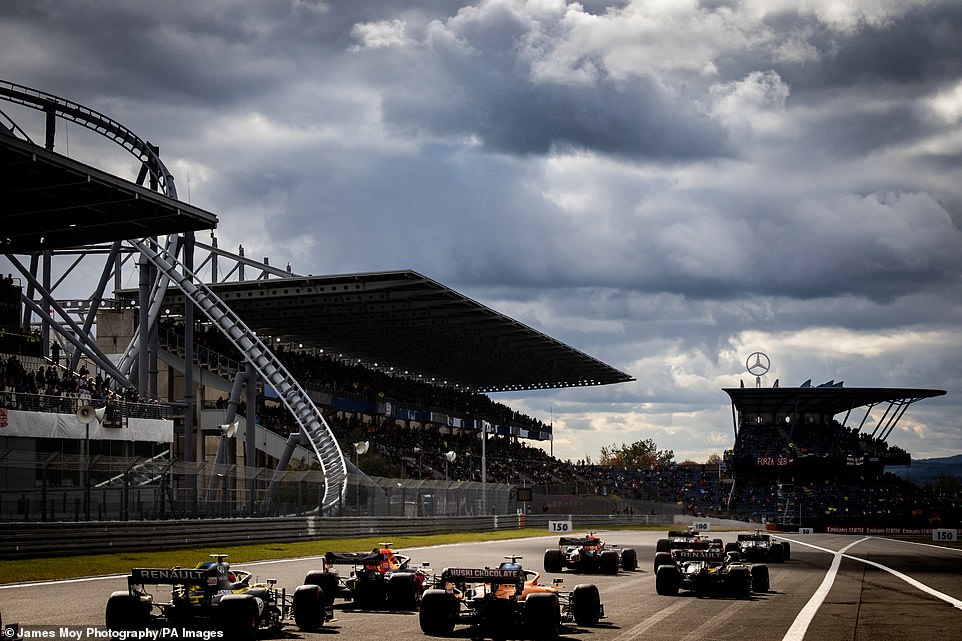 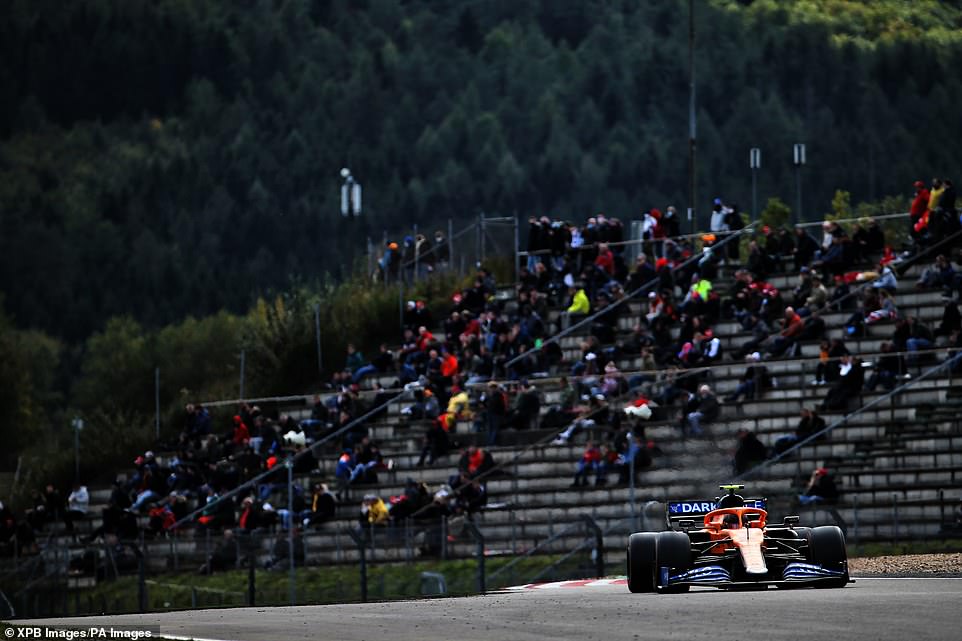 People will say that Hamilton is uniquely blessed by the dominance of the equipment he is driving. This is true. A jockey is better on Arkle than a Blackpool donkey. But he remains a super talent – his focus on winning undimmed by time. He has his other interests, such as fashion and music, but he has used those to keep him sharp for the day job.

The one moment of possible vulnerability in this latest race was presented by the safety car called out after Lando Norris’s McLaren conked out towards the close.

Would Verstappen be able to pile on the pressure? No, Hamilton made light of cold rubber on the re-start to remain clearly out in front. His serenity was in contrast to Ferrari’s Sebastian Vettel, who spun as he seems always to do these days. The four-time champion, inspired by Schumacher as a kid, had once imagined all the records for himself as he dominated the sport in the first four years of the last decade.

Over in the Alfa Romeo garage, stood Schumacher Jnr impassively watching on as his father’s feats were met.

It was a day to hail Hamilton, a talent as rare as Halley’s Comet.

RE-LIVE ALL THE ACTION FROM THE EIFEL GRAND PRIX…

Lewis Hamilton is looking to record his 91st victory in Formula One as looks to get back to winning ways at the Nurburgring for the Eifel Grand Prix following disappointment in Russia last time out.

After being hit with penalties following pre-race errors that cost him victory at Sochi the world champion is now hoping to match the great Michael Schumacher’s tallyof wins in the sport as he takes step closer to also matching the German’s seven world championships.

Follow all the Eifel Grand Prix action with Sportsmail as we bring you all the drama as it happens with the race getting underway from 1.10pm BST. 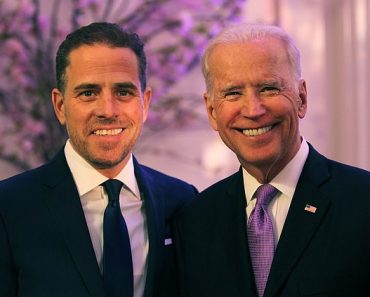