Culture Secretary Oliver Dowden apologised today for a ‘crass’ advert suggesting a ballerina should retrain to work in cyber-security after Twitter uses mistakenly assumed it was new.

He took to social media to distance the Government from an ad that featured a young dancer tying up her ballet pumps alongside the caption: ‘Fatima’s next job could be in cyber. (she just doesn’t know it yet).’

But the promo is one of a series published in 2019 – before coronavirus – by the National Cyber Security Centre (NCSC) to encourage teenagers and young adults to consider a career in cyber security.

Downing Street said the advertisement was part of a ‘long-running campaign’ but its timing was ‘not acceptable’.

The Prime Minister’s official spokesman said: ‘This is part of a campaign encouraging people from all walks of life to think about a career in cyber security.

‘But this particular piece of content was not appropriate and has been removed from the campaign.

‘The Government recognises the challenge to the cultural industry and today the Culture Secretary has announced £257 million of funding to help support 1,385 theatres, art venues, museums and cultural organisations across England.’

But that was not before it triggered a host of mocking memes. 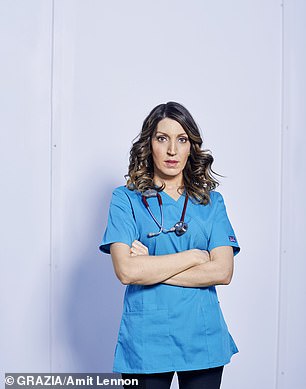 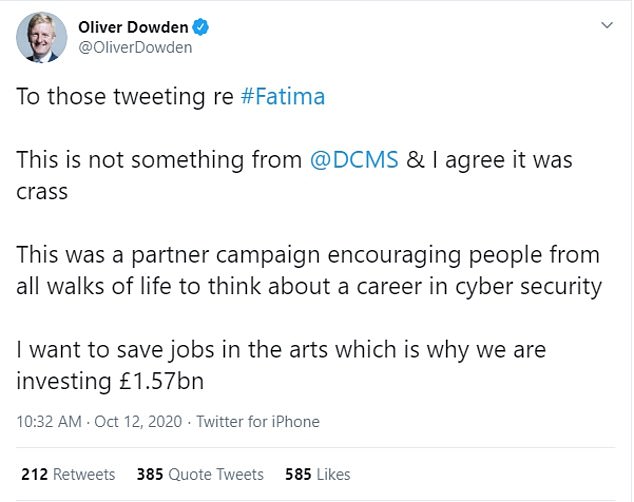 Downing Street also confirmed it was pulling the advert, saying it chimed badly with its efforts to support arts jobs during the pandemic 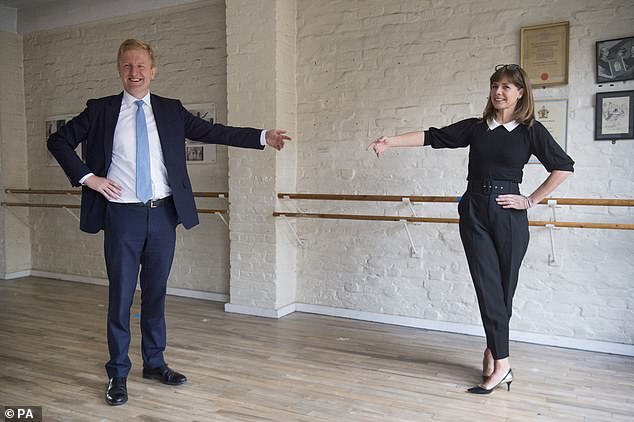 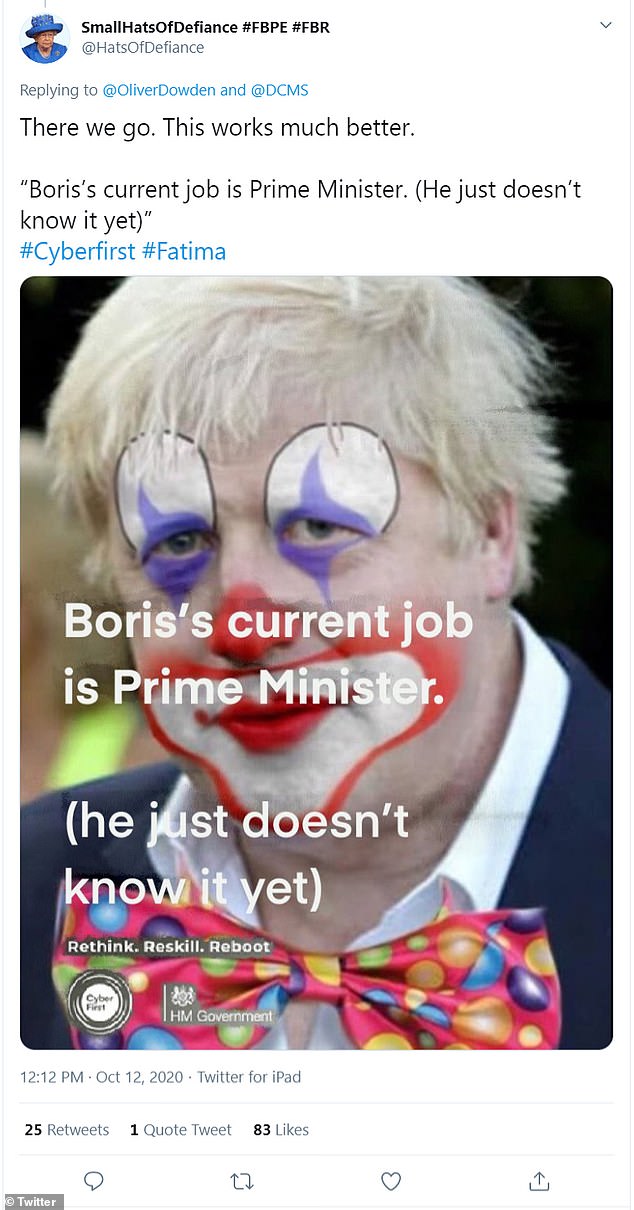 Shortly after ‘Fatima’ began trending on Twitter, Mr Dowden responded: ‘To those tweeting re #Fatima. This is not something from @DCMS & I agree it was crass.

‘This was a partner campaign encouraging people from all walks of life to think about a career in cyber security.’

He added ‘I want to save jobs in the arts’, pointing to the Government’s Culture Recovery Fund, which announced its first recipients today.

Liverpool’s famous Cavern Club, Bristol’s Old Vic theatre and the London Symphony Orchestra are among more than 1,300 arts venues and organisations to receive up to £1 million each as a share of £257 million of state funding.

Mr Hayes posted on Twitter: ‘Stick with your dreams, don’t listen to this sh*t campaign written by people who, when not working, turn to the arts – music, tv, film, theatre, dance, photography, etc etc for joy. Making joy is our job. Reboot your terrible advertisement.’

Author and columnist Caitlin Moran added:  ‘I don’t know if the government know they appear to have recently created a ‘Hopes & Dreams Crushing Department’, but for a country already depressed and anxious, I would suggest it’s a bit of a ‘Not now, dudes’ moment?’

Shadow mental health minister Dr Allin-Khan tweeted: ‘Fatima, you be you. Don’t let anyone else tell you that you aren’t good enough because you don’t conform to their preconceived social norms.’

Mr Sunak insisted he was talking generally about the need for some workers to ‘adapt’ and suggested there would be ‘fresh and new opportunities’ available for those who could not do their old jobs.

According to Arts Council England, the arts and culture industry contributes more than £10 billion a year to the UK economy, with £3 spent on food, drink, accommodation and travel for every £1 spent on theatre tickets.

Monday’s money recipients are venues and organisations who applied for less than £1 million, with future releases of up to £3 million going to larger organisations in the future, it added. 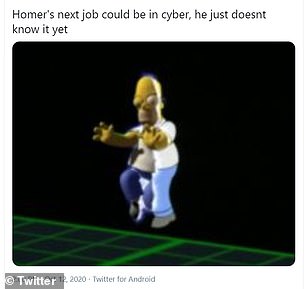 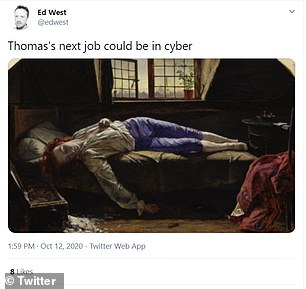 Downing Street also confirmed it was pulling the advert, saying it chimed badly with its efforts to support arts jobs. But that was not before it trigered a host of mocking memes

The Cavern Club, which launched the career of The Beatles, is currently closed down due to increasing coronavirus transmission rates in Liverpool.

Other venues in line for a boost include Beamish Living Museum in County Durham, the Northcott Theatre in Exeter and the Yorkshire Sculpture Park in Wakefield, the DCMS said.

Sir Nicholas Serota, the chairman of Arts Council England, which is distributing the money, said: ‘Theatres, museums, galleries, dance companies and music venues bring joy to people and life to our cities, towns and villages.

‘This is a difficult time for us all, but this first round of funding from the Culture Recovery Fund will help sustain hundreds of cultural spaces and organisations that are loved and admired by local communities and international audiences.’

He said further funding will be announced later this month.