Home
News
What are the best sustainable funds for good returns?
Prev Article Next Article

The Prime Minister announced a plan to make wind farms power every home in the UK inside a decade in his speech to the annual Tory party conference this week.

Boris Johnson’s big pledge, looking beyond the Covid-19 crisis to a brighter and greener future, was met with scepticism by some of his own MPs.

But many investors are well ahead of the Prime Minister when it comes to renewable energy and are piling cash into sustainable funds at a rapid rate as other sectors struggle in the pandemic.

Energy promise: Boris Johnson wants to make wind farms power every home in the UK inside a decade

They are perhaps heeding ex-Bank of England governor Mark Carney’s warning to the big institutional investor and pension funds that they risk seeing their assets become ‘worthless’ unless they wake up to the climate crisis.

One investment strategist notes that Johnson’s announcement of a £160million investment in ports and factories to increase the UK’s capacity in offshore wind fourfold by 2040 wasn’t overly ambitious since the UK was on track to do that anyway.

‘Having said that, the commitment to wind energy and the construction of factories, ports and other infrastructure is a welcome boost to the economy and should entice private investors to invest more in wind energy projects as policy uncertainty is further reduced,’ says Joachim Klement of Liberum Capital.

‘The £50billion in investments over the next decade that might be needed to achieve the goal seems incrementally likely to come from private investors who choose to invest in countries that have a clear an unambiguous commitment to green energy, rather than countries with a more wavering political class.’

So how might ordinary investors make money on the back of the Government’s determination to support renewable energy?

We round up experts’ views on ethical investing and Johnson’s announcement on wind power, plus their fund recommendations.

UK wind energy production capacity: Growth in the past and future 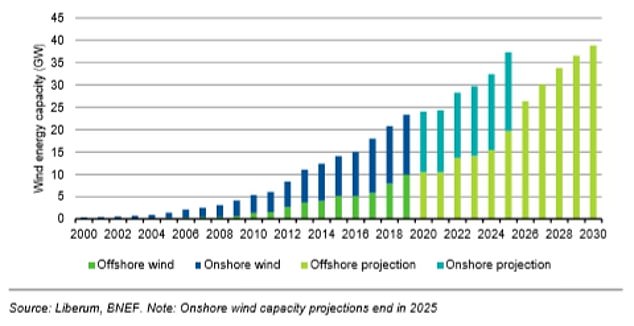 How to invest ethically: What to consider when choosing a fund

There is now a good range of sustainable funds available to UK investors and the amount of money in them is growing, says AJ Bell financial analyst Laith Khalaf.

But they still only make up 2.7 per cent of invested assets and have plenty of room for further growth, he adds.

‘In the second quarter of 2020, retail investors ploughed £2.55billion into responsible inv’estment funds, compared with £800million in the same period last year.’ 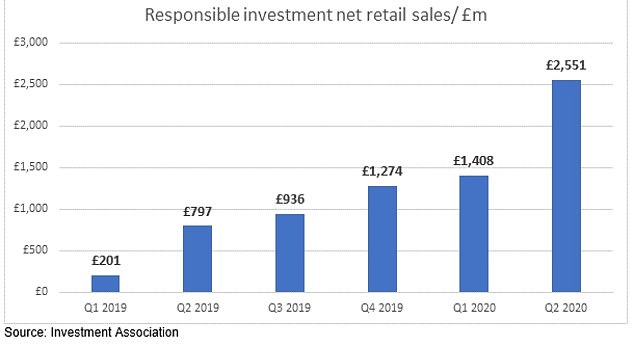 Popular: Many investors are well ahead of the Prime Minister when it comes to renewable energy, and are piling cash into sustainable funds at a rapid rate (Source: IA and AJ Bell)

‘Funds take different approaches to responsible investment, which means investors do have to do a bit of extra homework to check the fund they choose matches up with their ethical goals,’ says Khalaf.

Funds that aim to do no harm screen out any ‘ESG’ – environmental, social and governance – transgressors like gambling companies, arms manufacturers, fossil fuel producers and tobacco companies, he explains.

Which companies could benefit from wind power pledge?

‘The main beneficiaries are going to be companies that build wind turbines,’ says Joachim Klement of Liberum.

‘Here, Orsted is the leader in the UK, but other firms like Vestas Wind, Siemens Gamesa Renewables and General Electric may also benefit.

‘An expansion of wind energy is also likely to benefit electrolyser companies like ITM since the production of hydrogen uses wind and solar energy and hydrogen is an efficient way of storing surplus electricity.

‘Traditional battery storage funds might also be beneficiaries at the margin from the need to store excess wind energy.

‘Finally, infrastructure companies like Balfour Beatty and construction materials producers like Breedon, which has won contracts to build offshore wind farms in Scotland in the past, may also benefit from additional demand and the £160m investments in ports and factories.’

Meanwhile, Khalaf tips investment trusts Greencoat UK Wind and The Renewables Infrastructure Group, in addition to his fund recommendations below.

‘Investing ethically can also mean that you have a very different portfolio to world stock market indices and other investors,’ warns Khalaf.

‘That’s not necessarily a bad thing, but it can mean extended periods of both outperformance and underperformance.

‘It can also lead to additional risk in the portfolio, for instance through exposure to smaller companies and emerging technologies.

‘Investors shouldn’t let the perfect be the enemy of the good in this regard and could consider mixing traditional and ethical funds to create a more diversified and less risky portfolio.’

‘For instance, BP has promised to reduce carbon emissions to net zero by 2050. Phillip Morris, the manufacturer of Marlboro and Chesterfield cigarettes is shifting to new products to ‘deliver a smoke-free future’.

‘Very long term goals for sure, some may say flapping in the prevailing wind, but a significant change in direction of travel nonetheless.’

Khalaf adds that traditional index tracker funds don’t have any ESG screens and simply allocate money to stocks passively, but some track ethical indices produced by the likes of FTSE and MSCI.

‘Much like with an active fund, investors should check the sustainable criteria to make sure investment is aligned with their own goals – this time it’s the index they need to look at rather than the fund.’

Meanwhile, he says traditional funds are becoming more aware of ESG and building such considerations into their standard investing process, as a way of flagging risks.

‘The BP Gulf of Mexico oil spill, the Volkswagen emissions scandal and Boohoo Group’s failure to properly manage its supply chains are all examples of ESG failings which caused environmental and societal harm, but which also prompted steep falls in the companies’ share prices. That’s something no fund manager wants in their portfolio.’

What impact will Johnson’s pledge have on renewable energy sector?

‘The £160m package to improve the nation’s wind power infrastructure is a boon for companies in the sector, and the funds that invest in them,’ says Teodor Dilov, fund analyst at Interactive Investor.

‘The announcement comes at what has been a tough time for the energy sector.

‘A lot has been said about the plight of the established global energy players amid the coronavirus crisis, but the wind power and the broader renewable energy sub sector has not gone unscathed.’

He explains cheaper oil prices put pressure on the earnings of businesses in this space as this makes them the less attractive alternative. 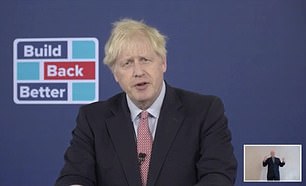 Boris Johnson speech: Wind power promise was met with scepticism by some of his own MPs

However, the Prime Minister’s pledge illustrates the ‘grow back greener’ campaign has legs and is gaining steam, he adds.

‘This, combined with continued efforts towards net zero carbon emissions by 2050 bodes well for the green energy sector.

‘But it is worth bearing in mind that alternative energy can also be sensitive to broader commodity price changes and is not immune to further Government interventions either, which are not always a boon.’

Darius McDermott, managing director of FundCalibre, says: ‘A decade ago, 40 per cent of Britain’s electricity came from coal.

‘Now the UK has the largest offshore wind industry in the world. Governments and companies around the globe are pledging to achieve carbon neutrality and at an accelerating pace, and this means there are plenty of great opportunities for investors.’

What funds could you consider?

Peter Michaelis, head of the sustainable funds team at Liontrust, has been investing in sustainability since 2001.

That’s two years before Greta Thunberg, who has done so much to raise the profile of climate issues, was born. 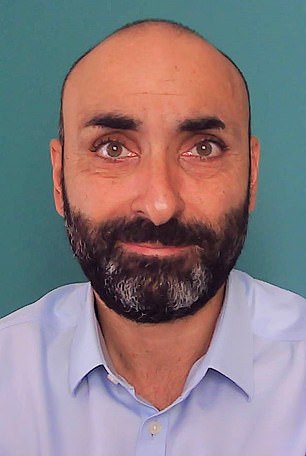 Laith Khalaf: Investors have to do a bit of extra homework to check the fund they choose matches up with their ethical goals

This fund invests across the global stock market in companies that are driving sustainable growth.

The fund doesn’t use negative screening, it selects companies based on their positive societal benefit.

The manager looks for investments that are exposed to one of around twenty sustainable growth themes, and seeks to run a concentrated portfolio of 40 to 60 stocks so that each investment makes a meaningful contribution to performance.

Manager Mike Fox has been involved in this fund since 2003.

It invests exclusively in the UK stock market and uses positive screening for ESG factors.

A more detailed qualitiative analysis is then conducted to really assess the ESG credentials of potential buys.

Companies are ranked and weighted within the fund based on a combined score for sustainability and financial performance.

The fund has a holding in SSE, which is building out its renewable energy capacity, including wind power.

The fund invests across the globe in high quality companies are positioned to benefit from the sustainable development of the countries in which they operate.

Manager Nick Edgerton has been managing the fund since 2012 (as co-manager until 2016).

The team have a conservative investment style and their investment picks are driven primarily by bottom-up analysis of the companies involved.

Over short to medium time periods the fund may deviate heavily from index returns, with the likelihood that it will lag in strongly rising markets but protect in down markets due to its quality biases and focus on capital preservation.

What is an ongoing charge?

The ongoing charge is the investing industry’s standard measure of fund running costs.

The bigger it is, the costlier the fund is to run.

The ongoing charge figure can be found in the Key Investor Information Document (KIID) for any fund, usually at the top of page two.

To track down these documents, put the fund name and ‘KIID’ together in an internet search engine. Read more here about investment charges.

We like VT Gravis Clean Energy Income fund which invests in a diversified portfolio of global listed securities of companies involved in the operation, funding, construction, generation and supply of clean energy – with wind power investment accounting for around 35 per cent of the overall portfolio.

It also offers investors a decent income in an ethical package, with a yield of 3.2 per cent.

The fund is relatively new having launched in 2017 and small in size with around £133.6million in assets.

There could be challenges over scale down the line, but it is off to a promising start, returning 56 per cent since launch.

Renewable electricity, which includes wind power generation, accounts for around 37 per cent of the fund’s portfolio.

The fund’s returns are very consistent with those of the benchmark and as at 6 October it has delivered 164 per cent over five years and 130 per cent over three years respectively.’

It invests mainly in investment trusts exposed to different types of UK infrastructure; from railways and roads to GP surgeries, wind and solar power.

It also has a nice level of income. It currently has 16 per cent of the fund invested in wind power and 18 per cent in solar power.

The fund has a unique approach of only investing in companies that are contributing to the decarbonisation of the world economy.

As well as avoiding creating carbon emissions, companies will also have to have at least 50 per cent of their revenues from three sectors: renewable energy; efficient use of resources, and electrification.

Its top holding is Vesta Wind Systems, for example, the Danish manufacturer of wind turbines.

Companies in which the managers invest must operate within the ‘safe operating space’ where human activities can take place safely. It also has Vesta as its top holding and 9.5 per cent in renewables.

This episode of the Investing Show is from September 2019: 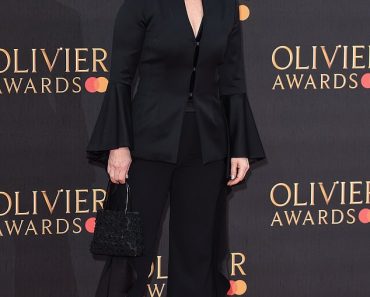 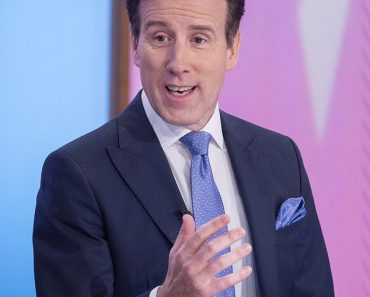