Dump and dumper! Locals who were infuriated by fly-tippers install crowdfunded HD cameras in the trees – and catch TWO offenders red-handed within days

Residents fed up with Tameside council’s ‘reactive approach’ – to clean up the litter chucked in the country lanes each week – decided they needed a high tech strategy.

They set up a fundraising page and were able to buy two £85 wildlife cameras which they hid around Park Bridge, Greater Manchester, earlier this month.

In the first video, recorded at 11.40am last Tuesday, a white van can be seen reversing into a lay-by, before the passenger gets out, runs to the back doors and tips a dustbin full rubbish and other waste onto the road.

A pair of dumpsters are seen chucking furniture and bedding out of the back of a van in Park Bridge, Greater Manchster, last Friday

And on a Friday a second camera caught another white van in the act.

Two men get out of the vehicle, open the rear doors and dump a mattress, three chairs and what appears to be an old bed onto the ground before driving off.

Tameside council say the waste has since been cleared up and the incidents are being investigated.

Residents say they were forced to take action after fly-tipping became a ‘weekly’ occurrence in the village.

They bought two £85 cameras, which are normally used for wildlife spotting, and put them up in the spots most commonly targeted.

Dan Bonser, who set up a GoFundMe page to raise the money for the cameras, which are camouflaged and equipped with motion sensors and night vision, said: ‘It’s just absolutely disgusting.

‘This is a close knit village, everyone knows everyone and everyone’s disgusted by it.

‘A horse rider was nearly thrown off her horse last week when a piece of tarpaulin that had been dumped flew up in her face.

‘We assumed it was happening at night, but the last two lots we’ve caught just did it in the middle of the day.

‘And it seems to have gotten worse during lockdown when the tips closed for a while.

‘Since then people seem to have realised they don’t have to go to the tip they can just come to Park Bridge and dump it here.

‘In fairness to the council they are good at coming and cleaning it up, but it always seems to be a reactive thing. What we need is a proactive approach to stop it happening.’

A Tameside Council spokesperson said: ‘The waste has all been removed – we started the removal yesterday and it was completed today. 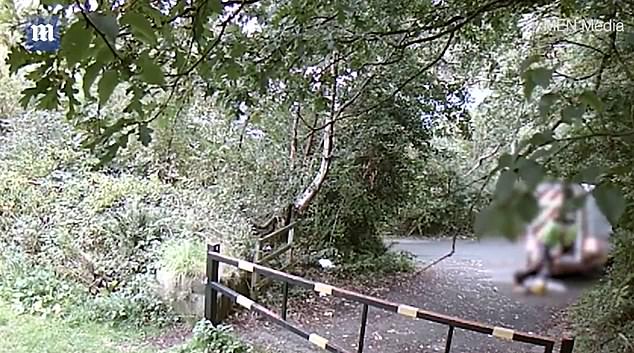 ‘Evidence was found within the waste and this is currently being investigated.

‘Flytipping is illegal and unacceptable at all times both to the local community and environment and to public resources and we will always take action where appropriate.

‘In general, there is an issue with unregistered waste carriers – or ‘man in a van’ type operators who often advertise on social media – fly-tipping waste.

‘If your waste is fly-tipped, by you or by someone else on your behalf, you could face an £80 fixed penalty notice or an unlimited fine.

‘It is a legal requirement that householders check their waste is being disposed of legally and responsibly.’