The Help to Buy scheme and a stamp duty holiday gave Britain’s biggest housebuilder a shot in the arm as the property market picked up speed.

Between July 1 and October 11, Barratt Developments handed over the keys for 4,032 homes – 24 per cent higher than the same period of last year.

The housing market has soared since it came out of lockdown in May, with pent-up demand leading to a flurry of completions and, more recently, the Government suspending stamp duty on homes worth less than £500,000 until next March.

Building boost: Between July 1 and October 11, Barratt Developments handed over the keys for 4,032 homes – 24 per cent higher than the same period of last year

But another Government salve, the Help to Buy Scheme, was clearly visible in Barratt’s trading update yesterday.

The number of private reservations using the recently extended programme rose to 51 per cent, from 45 per cent in the same period of last year.

Introduced in 2013, the controversial loan scheme essentially allows people to buy a newbuild house with a small deposit – and developers claim the programme is crucial in the effort to tackle the UK’s chronic housing shortage.

The reliance is likely to continue, Barratt said, as it pointed out mortgage lenders were currently offering 5 per cent mortgages for first-time buyers. 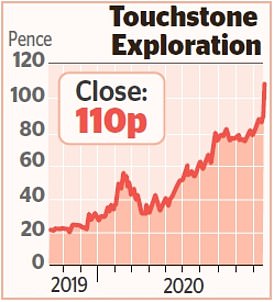 Energy minnow Touchstone Exploration has made its third big gas discovery in less than 18 months in the Trinidadian jungle.

Test drilling at its Chinook-1 well – which is one of the deepest drilled in Trinidad and Tobago in almost a decade – found much more gas than was expected.

It also tried out a new type of drilling on Chinook-1, which it intends to use more frequently.

The AIM-listed group saw shares rise 25 per cent, or 22p, to 110p, making it one of the junior market’s top risers.

Another boost could be on the horizon for Government-backed 5 per cent mortgages – but even without this Barratt’s orders are up 17 per cent to 15,135 homes, worth £3.65billion.

It said it expects profits this year to be ‘materially ahead’ of forecasts after many of its clients – which include the NHS – had to rapidly shift to remote working during the pandemic.

Synthomer, which makes polymers used in medical gloves, was in second place on the FTSE 350 leaderboard after it also said it would outperform this year.

Elsewhere on the mid-cap index, emerging markets-focused asset manager Ashmore (up 7.7 per cent, or 28p, to 391p) reported it had a bumper first quarter.

The value of its assets increased by 2.3 per cent to £66billion in the three months to September.

Things were shakier over at recruiter Page Group, whose industry has been battered by the jobs bloodbath triggered by lockdowns, but shares still managed to rise by 1 per cent, or 4p, to 415.2p.

Profits in the most recent quarter fell by around a third, to nearly £144million, and it warned that its business in the UK was faring worse than its European and Asian arms.

Retail investor favourite Angling Direct failed to make a splash with traders. Sales rose 21 per cent to £32million in the six months to the end of July and profit by 250 per cent to £1.4million as Britons flocked to take up fishing over the spring and summer as Covid restrictions stymied socialising.

However, the company admitted it wasn’t sure how long the ‘exceptional trends’ of the last few months would continue. Shares fell 4.7 per cent, or 3.25p, to 65.25p.