The combined magnetic fields of both the Moon and the Earth sheltered the latter’s developing atmosphere before the Moon’s magnetism waned, they concluded.

This protective and previously unrecognised buffer prevented Earth’s early atmosphere from eroding when the young Sun stirred up ‘violent space weather’ – which would otherwise have burnt our planet’s surface to a crisp.

‘Our planet has a special shield called a magnetosphere that protects us from harmful radiation from the Sun,’ said Dr Green.

‘The Moon is not so lucky – it doesn’t have a magnetosphere, at least not today, but scientists are learning that, billions of years ago, the Moon may have had a magnetic field just as strong as ours.

‘This kind of research is tremendously exciting because it tells us that these bodies, our solar system bodies or planets or Moons, are evolving over time.’

The Earth’s magnetic field is the product of the electric currents generated as liquid metal moves around in our planet’s core.

The Moon, meanwhile, used to have a robust magnetic field – but it has long since faded away.

In 1969, astronauts on the Apollo 12 mission – the the second to land on the Moon – discovered that the Moon’s magnetic field is about 1,000 times weaker than present-day Earth’s. 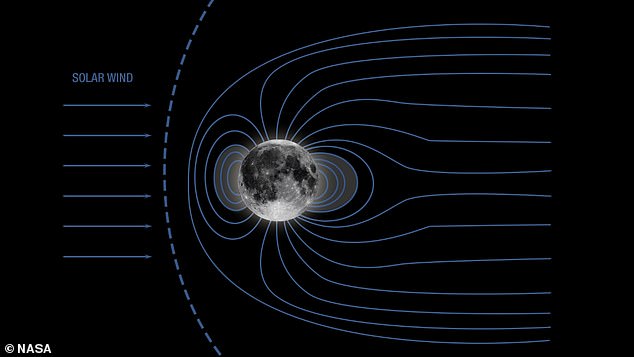 Our Moon, 4 billion years ago generated its own magnetic field, which acted as a protective buffer for the Earth

The magnetic properties of rocks can be revealed by the presence of minerals, which can provide a snapshot of a certain time.

‘From a scientific perspective, I keep saying the samples are a gift that keeps on giving because as we understand them more, we can go back and look at those and tease out more and more information,’ said Dr Green.

Additionally, research has called into question how the early Earth’s magnetic field alone could have sufficiently protected it from intense and destructive bouts of solar wind and radiation.

To learn more, Dr Green and colleagues modelled the overlapping magnetic dipole fields (MDFs) or ‘magnetospheres’ of the ancient Earth and Moon.

MDFs are the fields of electric charge between a pair of equal and magnetised poles, separated by a distance.

Billions of years ago, the Moon’s magnetic field was at peak intensity. 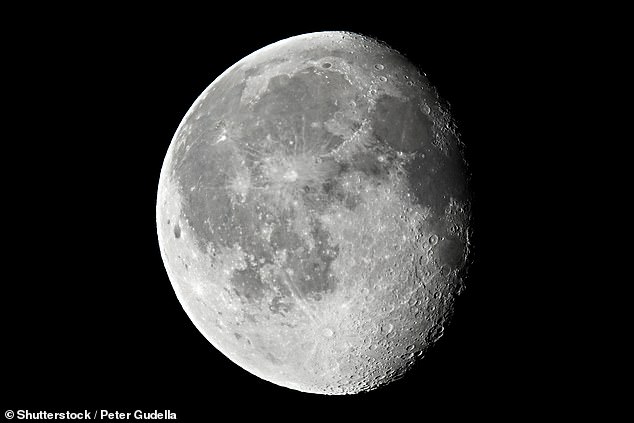 It was also much closer to Earth – only about 18 Earth radii away, compared with roughly 60 Earth radii today.

One Earth radii is simply the Earth’s radius – the distance from the centre of Earth to its surface (3,958 miles).

The Moon is still slowly drifting away from us, at a rate of about a single inch, or around 2.5cm, every year.

Dr Green’s simulations suggested that the Moon’s magnetic field acted like a protective bubble, taking the brunt of fierce solar winds and offering Earth’s atmosphere ‘an extra line of defence’.

The team anticipate that further trips to the Moon could provide further evidence to build on this study, which has been published in Science Advances.

Samples gathered during NASA’s upcoming Artemis program, which will land the first woman and next man on the Moon by 2024, could be crucial.

Earlier this year, scientists revealed that the moon’s once-strong protective magnetic field disappeared around one billion years ago when its internal dynamo stopped working. 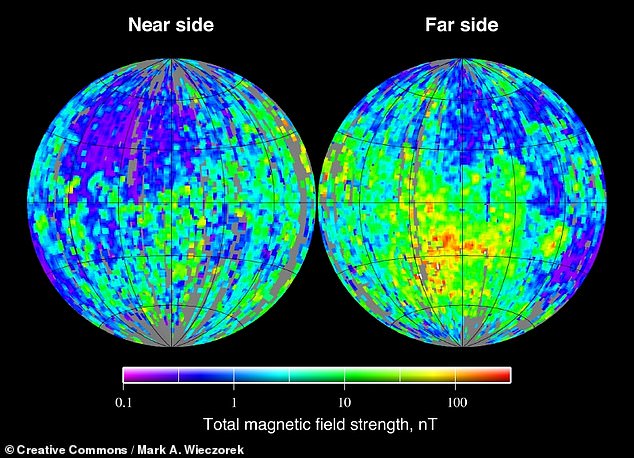 Researchers found that the field one billion years ago had dropped down to 0.1 microteslas -around 500 times weaker than the Earth’s today. Pictured, the total magnetic field strength at the surface of the moon as recorded by NASA’s Lunar Prospector in November 2006

To determine the past strength of the field, researchers studied rocks from the moon’s surface that were formed out of molten material generated by a large impact.

As this rock cooled, tiny grains inside lined up with the magnetic field to form a snapshot of the field’s strength and direction at that time.

Researchers found that the field one billion years ago had dropped down to 0.1 microteslas – around 500 times weaker than the Earth’s today.

The dynamo that powered the field, driven by the crystallisation of matter in the lunar core, had ceased by this time.

WHEN IS NASA GOING BACK TO THE MOON?

In a statement in March, NASA Administrator Jim Bridenstine doubled down on plans to send humans first to the moon and then to Mars and said NASA is on track to have humans back on the moon by 2028.

The plan relies on the developing Space Launch System and Orion spacecraft, along with the Gateway orbital platform.

SLS and Orion are expected to be ready for their first uncrewed test flight in 2020.

Construction on Gateway – an orbiting lunar outpost – is expected to begin as soon as 2022.

‘We will go to the Moon in the next decade with innovative, new technologies and systems to explore more locations across the lunar surface than ever before,’ Bridenstine said.

‘This time, when we go to the Moon, we will stay.

‘We will use what we learn as we move forward to the Moon to take the next giant leap – sending astronauts to Mars.’

Vice President Mike Pence, however, tore up these plans and statements when he unexpectedly revealed a new deadline in March stating intentions to put humans on the moon by 2024 – four years earlier.

The VP called on NASA to ‘reignite the spark of urgency’ for space exploration and make it a priority to set ‘bold goals’ and stay on schedule.

NASA administrator Jim Bridenstine added a week later, at the start of April, that the agency would get ‘really close’ to delivering a plan by April 15.

This has been missed by several weeks and the House Science Committee is now vocalising its displeasure at having no viable plan or programme from the space agency.