Locked-down Brits are facing more misery this week with ‘severe gales’ and downpours set to hit the south east.

Storm Barbara is due to arrive in the UK on Wednesday, after making its way through southern Europe, and could bring wind and rain with it – a change from recent conditions which have been mostly dry and cloudy.

While a slight upturn in temperatures is expected, meteorologists are monitoring the development of the storm, which is bringing adverse weather to parts of Portugal and Spain on Tuesday.

While there is not expected to be a major impact on the UK, there could be some downpours for those in the south east and possibly central England on Wednesday.

A Met Office spokesman said: ‘The development of this storm system is still relatively uncertain and therefore, although not currently expected, there is still the potential for severe gales to affect the extreme south-east of England during this period. Therefore, we are carefully monitoring the storm’s development.’

Meanwhile, there are two yellow severe weather warnings in place across the UK with heavy showers set to arrive nationwide.

One rain warning covers Northern Ireland where 20-30 mm of rainfall is expected, with some hills and mountains likely to see 40-60 mm.

There is a low risk that a few places, in particular the Mourne Mountains, could see as much as 80 mm or more.

Rain was seen in Paisley high street today, pictured, and downpours are expected to hit Britain for the rest of the month 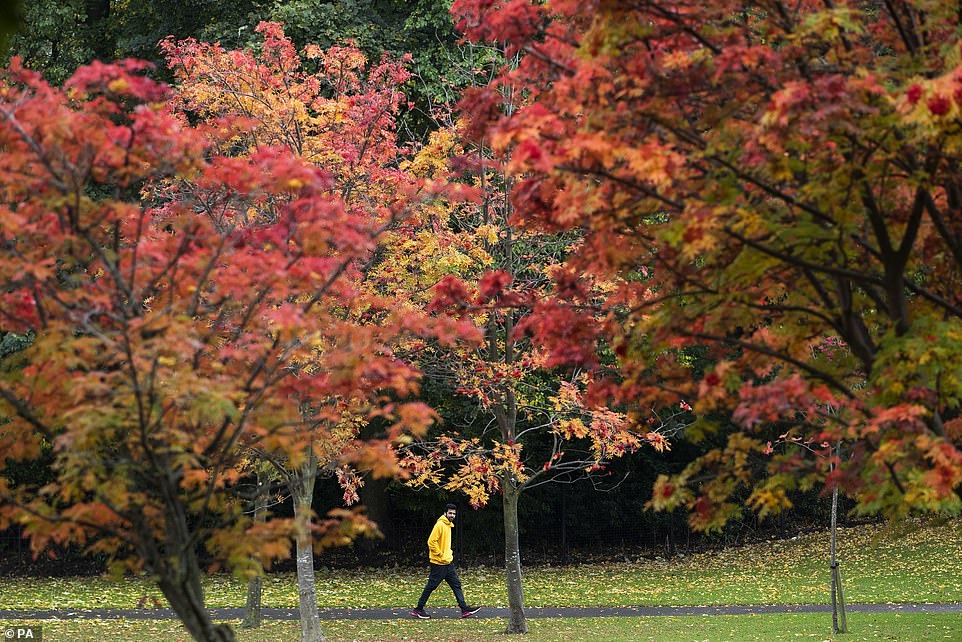 Locked-down Brits are facing more misery this week with wind and rain being forecast over the coming days – a change from recent weather which has been mostly dry and cloudy (pictured: a calm day in Edinburgh on Monday 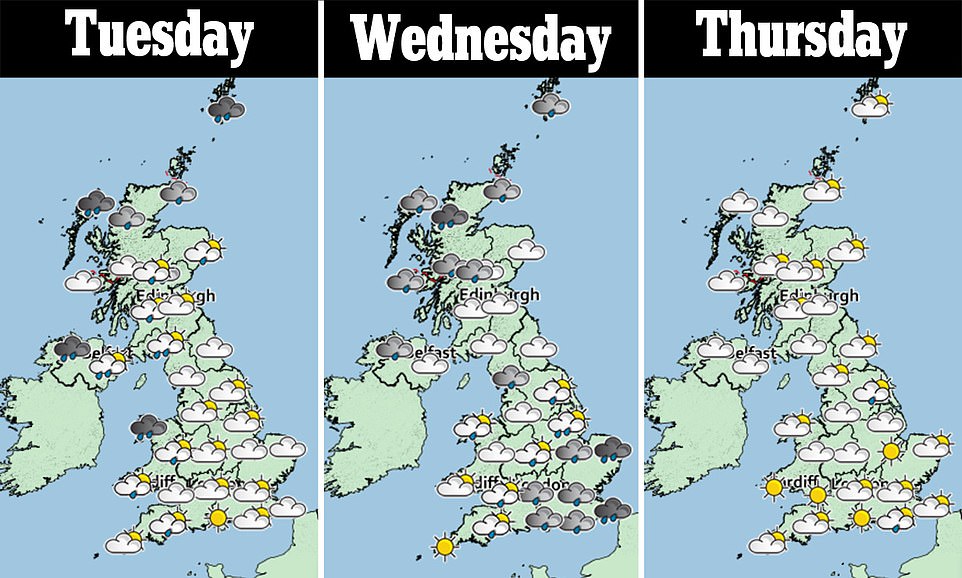 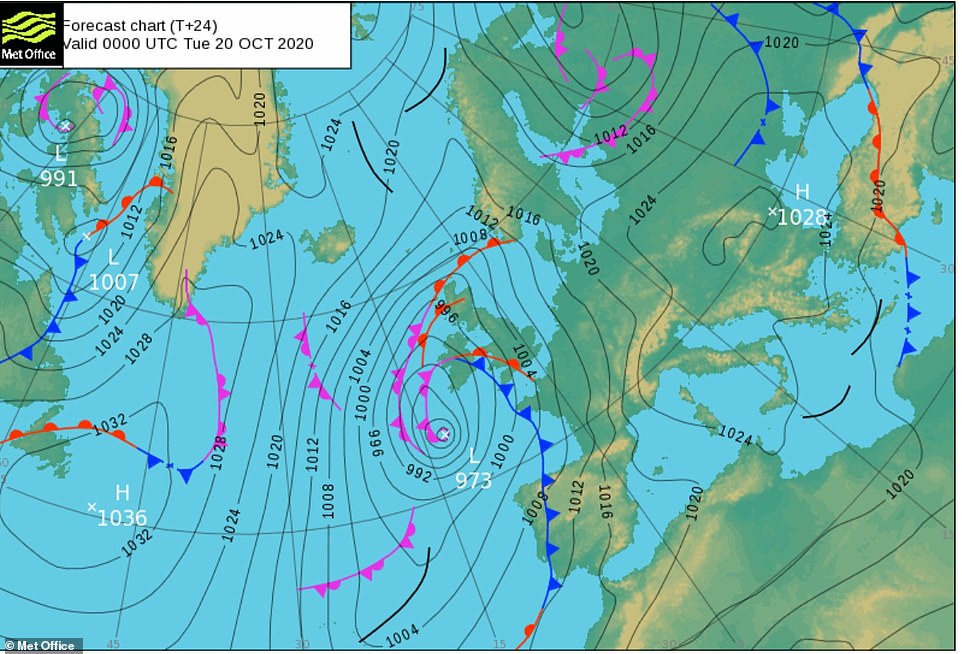 A Met Office graphic shows how Storm Barbara will make its way through Europe on Tuesday, before it is expected to arrive in the UK on Wednesday 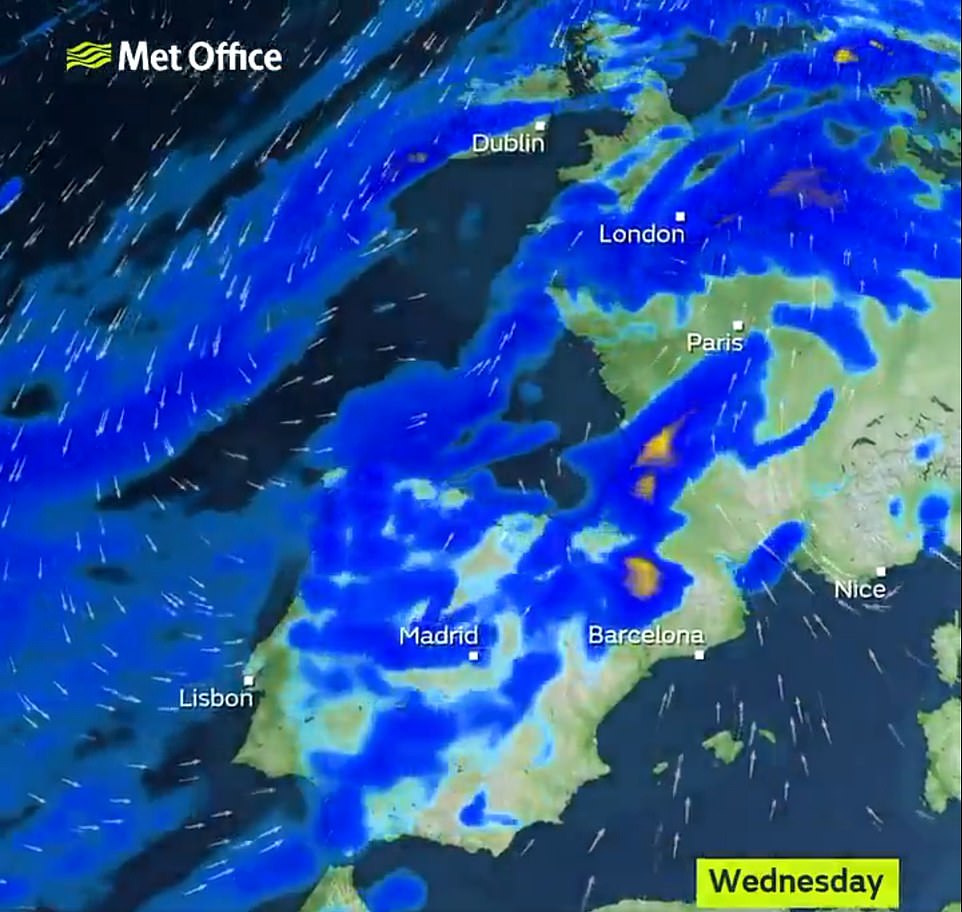 The other warning covers parts of Scotland, including the Central Belt, where 50-75 mm of rainfall is expected over hills and mountains.

However, a few isolated spots, most likely in Argyll, could see as much as 75-100 mm of rainfall.

Met Office Chief Meteorologist, Frank Saunders, said; ‘Tomorrow (Tuesday) a low-pressure system, separate to Storm Barbara, will cross Ireland and Northern Ireland bringing gale or even severe gale force winds to some exposed parts of the west and South West of the UK.

‘As we look ahead to the rest of the week, we are expecting rain or showers for many areas on Wednesday, possibly heavy and blustery in the South East.

‘It will be quieter on Thursday but more unsettled from Friday, with spells of wet and windy weather moving in from the west.’

The Met Office also dismissed speculation of widespread snow, insisting there is no indication of such conditions arriving for the rest of the month.

It comes after wearied Brits were warned that the coming onslaught of wind and rain could last until the end of October.

Heavy wind and rain is set to smash parts of the UK over the coming days, with a ‘turbulent’ week of weather ahead. 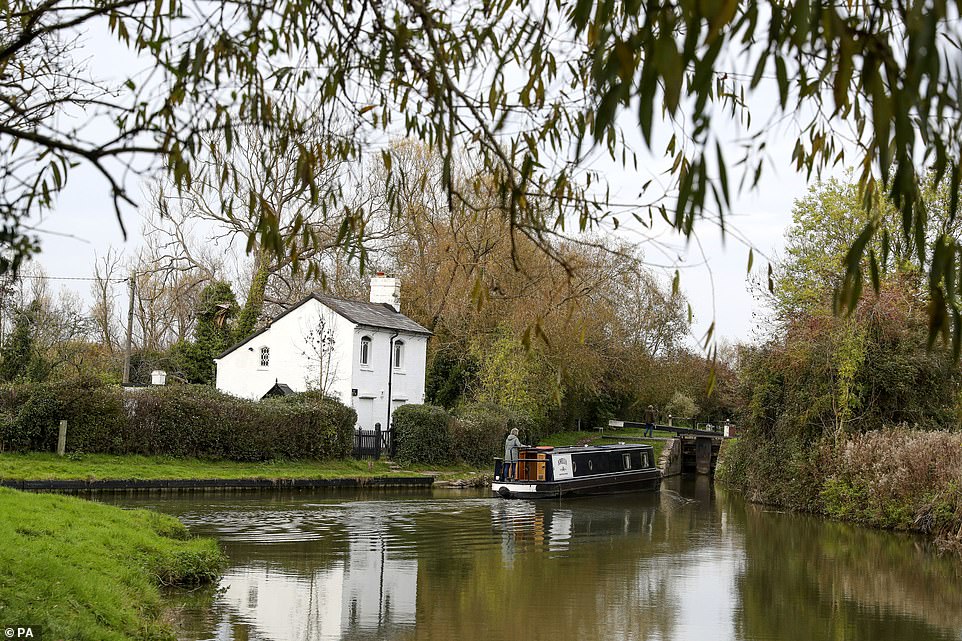 A canal boat passes Duke’s Lock cottage in Wolvercote, Oxford on a calm day on Monday, with Storm Barbara set to hit later this week 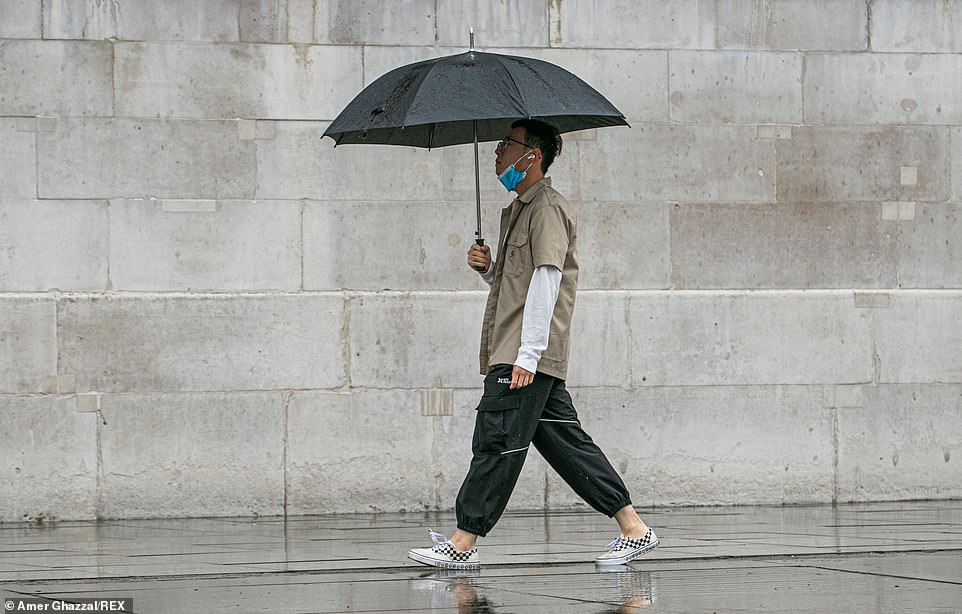 Gusts of 40mph are expected over the Irish sea, while up to 60mm of rain could fall, rising to 80mm in mountainous regions.

Luke Miall, a meteorologist at the Met Office, said: ‘Well there’s a turbulent week of weather ahead, it is starting to look wetter and windier.

‘Going into Tuesday the rain will start to push towards Wales and the south-west of England, with most of the UK seeing rain at some point.

‘The winds will be much stronger on Tuesday with heavier showers in Northern Ireland and Scotland.’

He said this was due to a spell of high pressure and air being dragged in from the Mediterranean.

Wednesday is expected to be the warmest day next week, with some areas seeing 64.4F (18C) temperatures.

Mr Miall added: ‘Unlike last week where the weather has been fairly static, this week will be changeable with the rain having the most impact.

‘This is fairly typical for the time of year.’

In Essex, cars were left submerged in water after high tides flooded coastal roads in Tollesbury on Sunday.

A large section of the north Essex coast – including areas such as Clacton-on-Sea, Brightlingsea, Mersea Island, Colchester, Maldon and Tollesbury – were placed under a government flood alert earlier in the day.

The alert was in place between 12.30pm and 2.30pm, and warned that high tides would cause some flooding on coastal roads.

The alert read: ‘Tides are expected to be higher than usual due to spring tides.

‘The Strood at Mersea Island, Coast Road and car parks on the front at West Mersea, and the Hythe and Promenade at Maldon may be flooded.’ 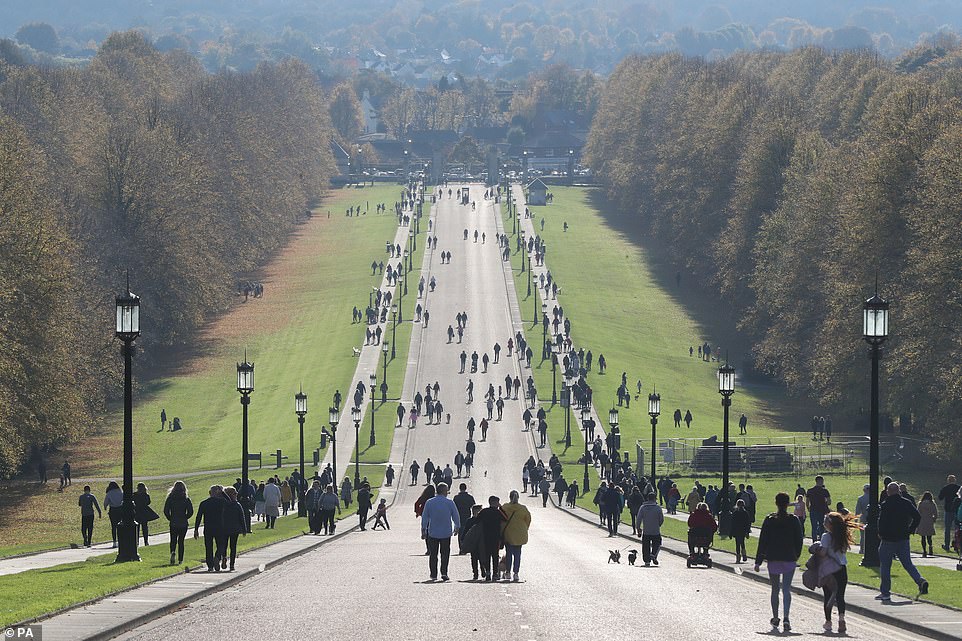 Gusts of 40mph are expected over the Irish sea, while up to 60mm of rain could fall, rising to 80mm in mountainous regions. Pictured: The Stormont estate in Northern Ireland on Sunday 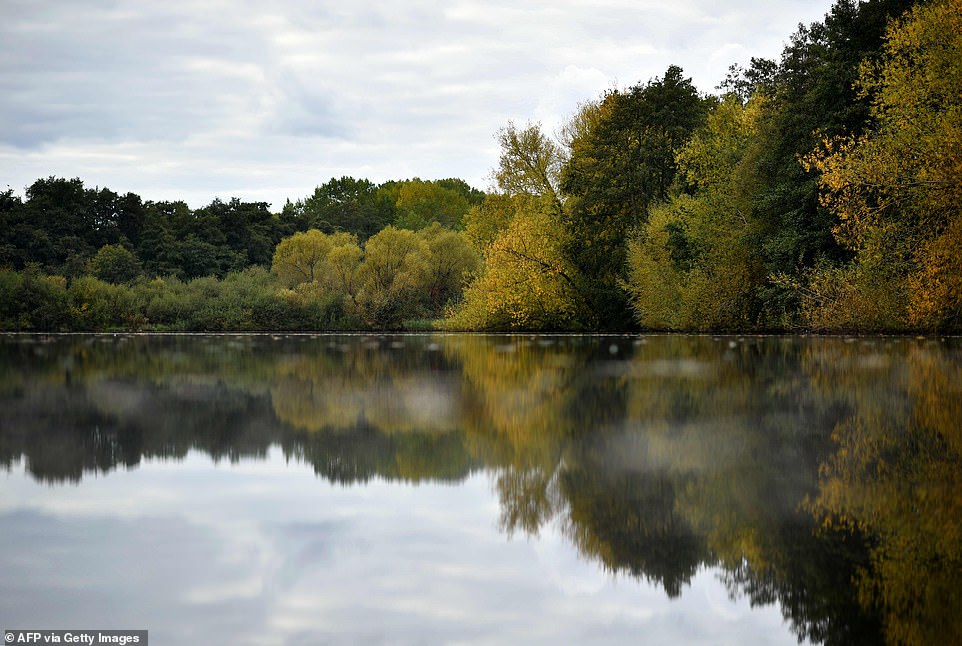 Luke Miall, a meteorologist at the Met Office, said: ‘Well there’s a turbulent week of weather ahead, it is starting to look wetter and windier.’ Pictured: Autumn colours reflect of a lake in Horsmonden, Kent, on Sunday 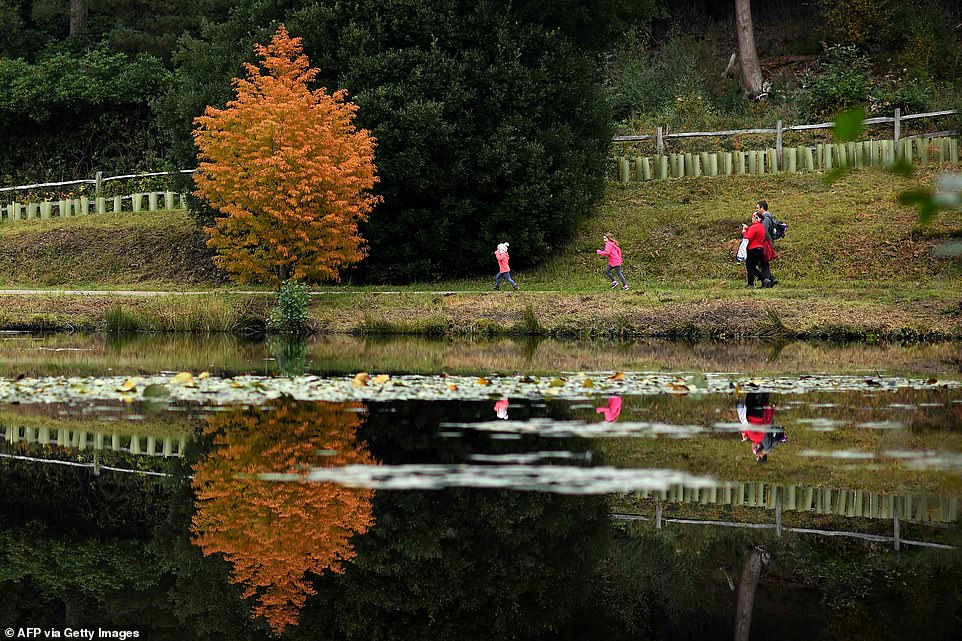 Mr Miall added: ‘Unlike this week where the weather has been fairly static, next week will be changeable with the rain having the most impact.’ Pictured: Bedgebury Pinetum in South-east London on Sunday 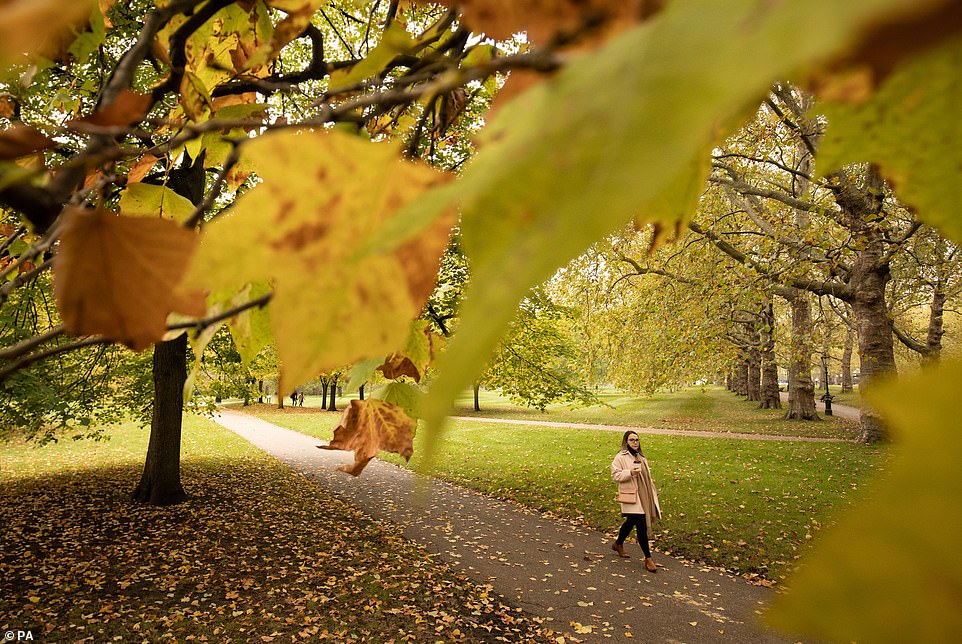 The photos taken at Tollesbury show the scene during high tide, leaving cars stranded and pathways covered by water.

Bookmakers Coral have now cut the odds on this month beating that record from 6-4 to 4-5, and make it 1-2 for snow to fall UK this month, while it is now 4-9 for this winter to be the coldest since records began.

A spokesman for the company said: ‘Winter is set to arrive early this year and with temperatures falling fast over the next few days, the odds have been slashed on this month ending as the coldest October on record.’

Last week, it emerged that Britain endured its wettest day on record earlier this month – with enough rainfall to fill Loch Ness. 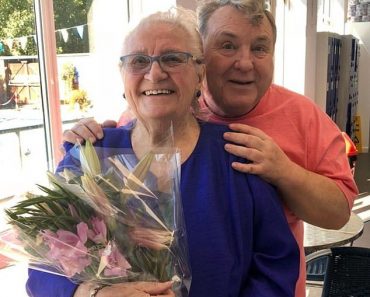 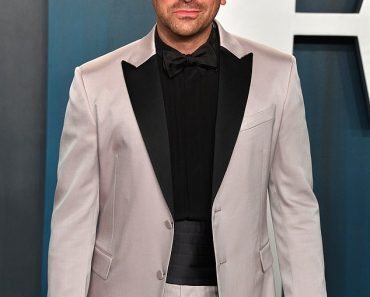 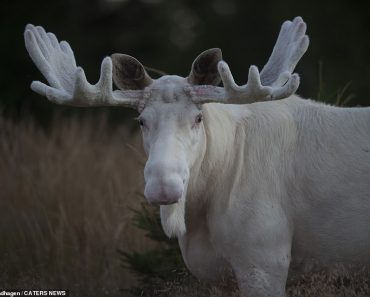