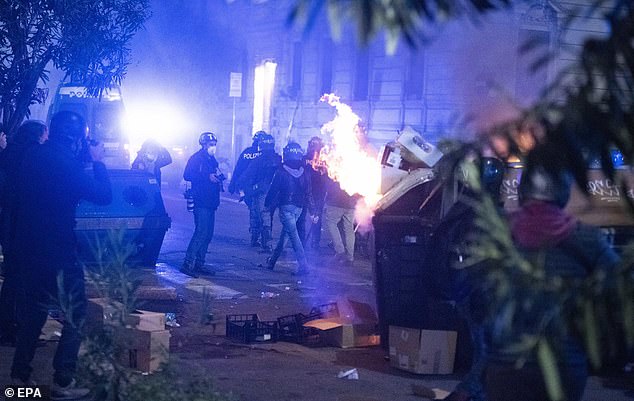 As the coronavirus crisis drags on, the mood in Europe is turning ugly. Tempers are fraying. Frustration is at boiling point.

And, as the shocking photos on this page reveal, with new Covid restrictions being introduced across the continent, many countries are sliding into open rebellion.

Take Italy, for example, where this week at least a dozen cities have seen violent protests against the government’s reimposition of a tight lockdown.

The most serious occurred in Milan and Turin, where demonstrators committed arson, vandalised public transport, looted shops and attacked the police with stones and petrol bombs. 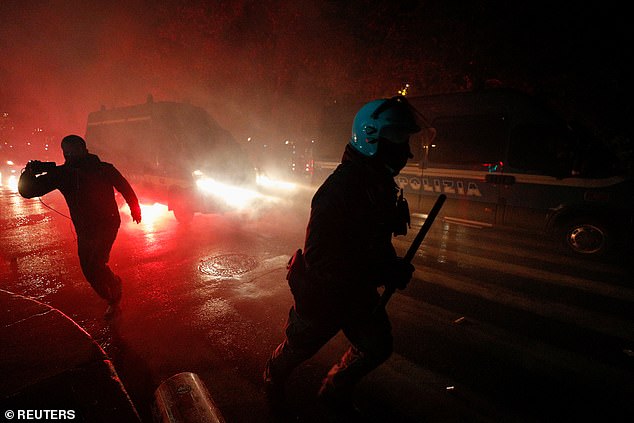 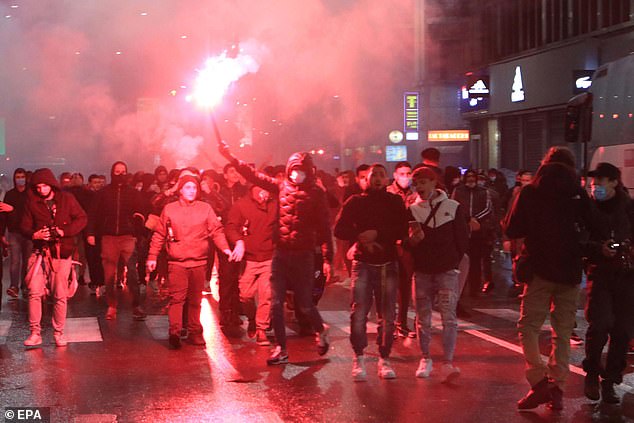 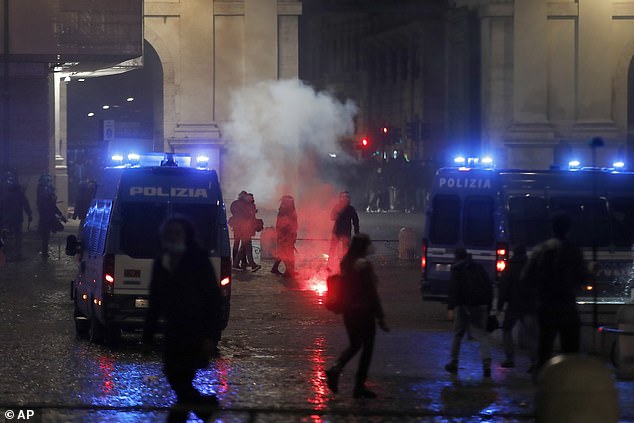 The flames of discord have spread to Spain, where the declaration of a second state of emergency and the prospect of a six-month lockdown led to huge protests on the streets of Barcelona, with scores of rubbish bins set on fire.

There have been explosive anti-lockdown rallies in the Czech capital of Prague, at least one of which had to be broken up by the police using tear gas and water cannon.

Even Germany, where the public is renowned for its obedience to authority, is experiencing unrest.

‘Why aren’t you telling the truth, Mrs Merkel, about how we are losing our freedom, jobs and health?’ read one placard at a demonstration in Berlin.

Across the Channel in France, where a state of emergency has also been declared recently, there have been major protests in several cities, including Paris and Marseille.

Indeed, one poll yesterday showed that just 37 per cent of French voters think that the government of president Emmanuel Macron has handled the pandemic effectively – hardly a surprise given that the daily total of infections passed the milestone of 50,000 on Sunday. 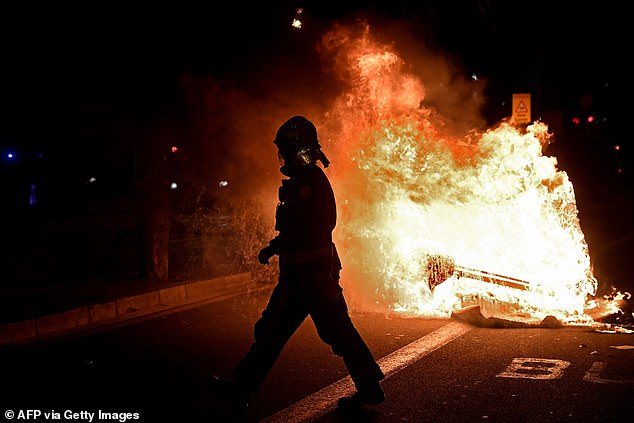 So how long will it be until Britain follows suit and street protests are triggered?

Thankfully, our country has not yet reached the stage of combustible revolt.

But, as stoicism gives way to scepticism, it is clear that there is far less unity now than there was back in the spring when the first lockdown was introduced.

Anti-lockdown demonstrations are a regular weekend occurrence in central London, while the willingness of normally law-abiding citizens to comply with ever-more complex regulations is beginning to fray.

This week even the BBC presenter Victoria Derbyshire admitted that if the rule of six were still in place by Christmas, she would ignore it.

She later backtracked from this stance, but her initial statement reflected an increasingly widespread disenchantment with the current rules. 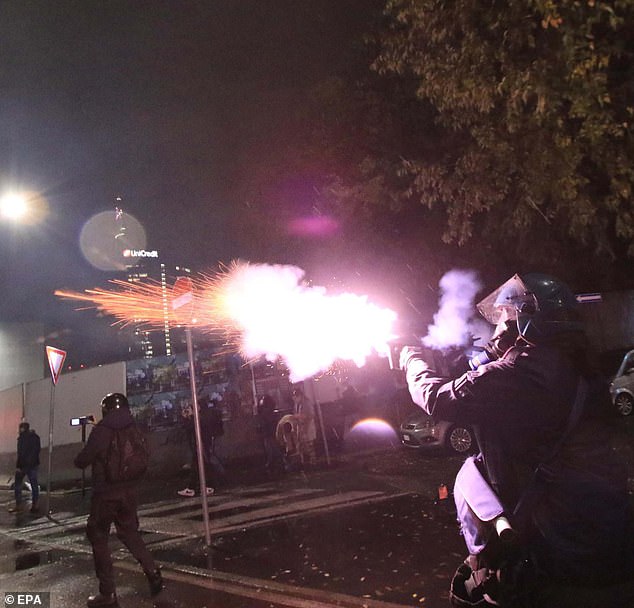 Protesters in Milan attacked the police with stones and petrol bombs

According to the latest polls, only 39 per cent of the public approve of the No 10’s Covid policy.

Even Tory MPs seem to have had enough, with a number of those in northern seats now on the verge of open rebellion against the Government’s perceived lack of a coherent exit strategy from the new Covid lockdowns being imposed on them with devastating economic impact.

As someone who has to self-isolate because of an underlying health problem – the onset of Parkinson’s Disease – you would expect me to support the current restrictions.

Yet I have deepening reservations about the Government’s handling of this crisis.

For it appears to me that we have ended up in the worst of all worlds, governed by rules that are both draconian and ineffective.

A central part of the problem is that the public’s faith in officialdom has been badly eroded, largely due to the gross hypocrisy of those who devised Britain’s restrictions.

After all, it is impossible to maintain national cohesion when there is one law for the hard-pressed citizenry, another for the privileged elite. 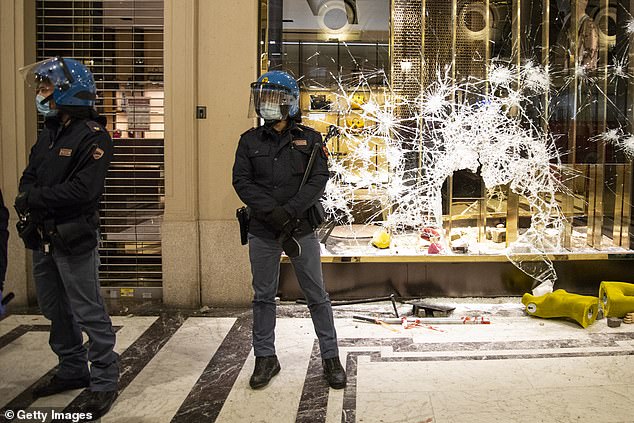 Too many of the rule-makers have turned out to be rule-breakers, refusing to tolerate the same sacrifices that they so piously demanded of others.

The most egregious purveyor of such double-standards was undoubtedly Downing Street’s chief strategist Dominic Cummings, whose notorious trip by car to Barnard Castle in County Durham after he had contracted Covid was a clear breach of the lockdown.

His lack of contrition, never mind his refusal to resign, has permanently undermined the Government’s credibility and, I would suggest, was a tipping point for the public mood which, over the past few months, has been increasingly restive.

There were, of course, others like him, such as Housing Secretary Robert Jenrick, who visited his self-isolating parents in distant Shropshire at the peak of lockdown, or SNP MP Margaret Ferrier, who shamelessly made a round-trip between Scotland and London last month despite knowing that she had tested positive for the virus.

Just as reprehensible was the behaviour of doom-mongering scientist Professor Neil Ferguson, the real architect of the lockdown strategy, whose illicit trysts with his married lover made a mockery of his own stern injunctions against household mixing.

‘I thought I was immune,’ he said in his defence, having tested positive for the coronavirus and isolated himself for ‘almost two weeks’ – an utterance that we now know contained more political than medical truth.

Meanwhile, the morale-sapping impact of such hypocrisy on the country has only been compounded by the Government’s heavy-handedness in meting out new restrictions. 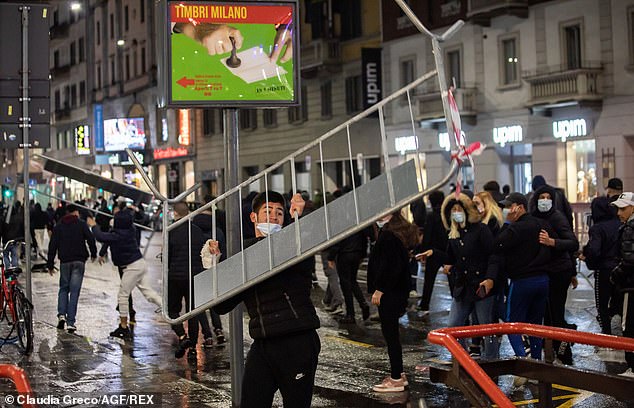 Protesters in Milan during a protest against the new coronavirus measures

More than 8million people in England are now living under the highest Tier 3 rules, while the devolved nations of Scotland, Wales and Northern Ireland have even tougher lockdowns.

Indeed the Welsh government appears to have become a mix of theatrical farce, communist East Germany and Cromwellian puritanism. Bizarre, contradictory regulations on essential sales have led to books on supermarket shelves being cordoned off with police tape.

‘I can buy a Babycham, but not baby milk,’ complained one shopper, highlighting the nonsense.

At the weekend, a service at a church in Cardiff was even raided by police with searchlights because it broke Wales’s particularly draconian ‘firebreak’ restrictions.

This assault on essential liberties is wholly unBritish. Freedom is meant to be central to this country’s heritage.

Yet today, ordinary people are being heavily punished without trial for the breach of some arbitrary edict. 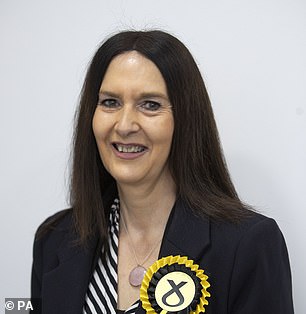 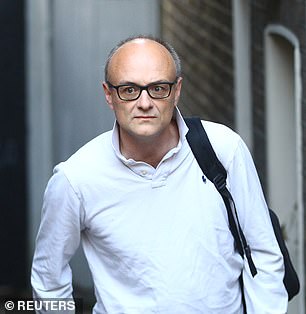 Just ask Manchester University student Carys Ingram, who was recently fined £6,600 after she posted a photo of herself on social media breaking quarantine rules during a visit to see her family in the Channel Islands.

Of course, it could have been worse. Last week individual penalties of £10,000 were imposed on three Nottingham students for holding a house party.

And in recent weeks we’ve seen just how easy it is for this jobsworth mindset to descend into outright cruelty.

That trend was epitomised earlier this month during a funeral at a Milton Keynes crematorium, where the ceremony was interrupted by an appallingly cold-hearted official who rushed forward to prevent a son from hugging his grieving mother.

It was a deeply disturbing indication of how individuals are being made to suffer unnecessarily by the current social-distancing measures.

Yet we must remember, too, that Britain as whole is also paying an enormous price for the current restrictions, both economically and in terms of our general health.

At the start of this year, who could have thought that by October we would be living in a country where the national debt is bigger than the size of the economy?

And so, after failing so miserably on so many fronts, it would take a Government of some nerve to now demand absolute obedience from the British public.

For if it does, it will only stoke the fires of indignation.