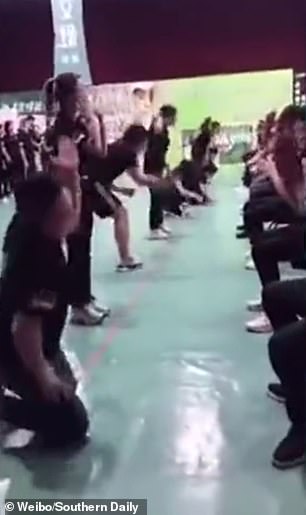 By Billie Thomson For Mailonline

A Chinese company is reportedly under investigation after being accused of forcing its staff to slap themselves repeatedly.

Trending social media footage shows a group of employees kneeling on the ground, seemingly chanting slogans and punishing themselves.

Their employer told reporters that the clip was recorded during a training session aimed to help its sales staff build their resilience. 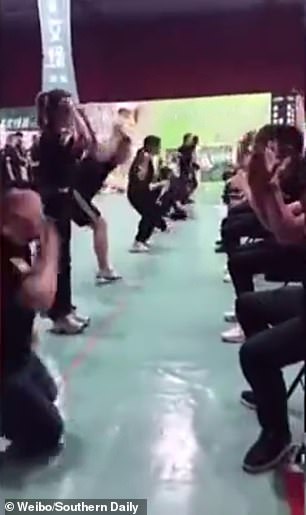 A Chinese firm has been accused of forcing its staff to slap themselves in the face. Viral footage shows a group of workers kneeling on the ground, seemingly punishing themselves

Speaking to a local newspaper, the firm insisted that the workers had slapped themselves ‘voluntarily’.

The 33-second clip was said to be taken recently in the city of Dongguan in southern China and shared by Southern Daily on Twitter-like Weibo on Wednesday.

It shows a row of around eight men and women, all dressed in black, standing in front of their individual trainer.

At least one of them is seen hitting his face over and over again. Others appeared to slap their hands on the ground or strike their fists in the air.

At one point, the man who had been slapping his face, took off his T-shirt and began to beat it against the floor several times.

The company, which reportedly sells furniture, stressed that it had not forced its employees to carry out those actions. 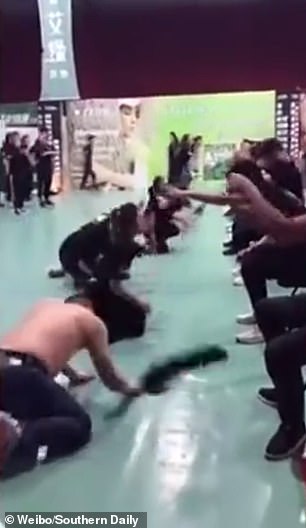 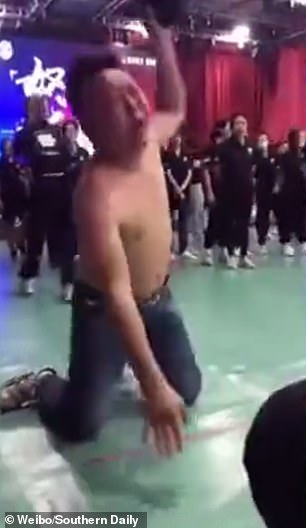 Speaking to a local newspaper, the firm insisted that the workers had slapped themselves ‘voluntarily’. The trending clip also shows the employees hitting the ground and shouting

A company spokesperson was quoted saying: ‘They did it voluntarily.’

According to Southern Daily’s report, the training was intended to help the firm establish an ‘iron army’ of sales and allow the staff to perform their best while selling their products.

A brand manager, named Zhang Min, was quoted claiming that the training had been organised by a third-party agency.

The human resources authority of Dongguan told the newspaper that it had been notified of the video and was investigating the matter.

According to China’s employment contract law, employers are not allowed to humiliate and give corporal punishment to workers. Furthermore, the employer shall be liable for compensation if any harm is done to the worker.

Nevertheless, many Chinese companies have been known for carrying out public humiliation rituals as punishment, from crawling on the streets to eating worms.

In 2018, workers at a hair salon were reportedly forced to slap themselves in the face 100 times, wolf down raw chillies and run 10 kilometres because their work performance hadn’t reached their boss’s expectation.

A month earlier, employees at a home improvement firm were allegedly whipped with belts, forced to drink urine and eat insects after failing to reach their targets.

However, some firms have been caught shooting and releasing such videos deliberately to boost their publicity.

In 2019, workers from a company in Tengzhou were seen being ‘forced’ to crawl on the street.

It was claimed at the time that the employees had not been able to reach their sales target.

The video sparked an outcry but later turned out to be a PR show.

Tengzhou police said the company had organised the event to attract attention. The company also apologised to the public for the stunt.