Two thirds of Brits are feeling lonely during coronavirus lockdown, prompting many of us to reach out to old friends if we can overcome the awkwardness, a new report from Snapchat claims.

The social media platform’s second annual Friendship Report into the nature of friendship found that 68 per cent of Britons now experience loneliness, up from 61 per cent pre-pandemic.

When asked to think about the effects of Covid-19 on their friendships, 48 per cent say being unable to see their friends has made them feel lonelier.

But 41 per cent of Brits say friendships are more important to them now, and 44 per cent are reaching out to friends that they haven’t spoken to in a while.

However, Brits ‘fear awkward pauses and failed connections’ so much that we forego the opportunity to start a friendship, deepen a relationship or reconnect with old mates.

Covid-19 has brought some friends closer together on platforms like Snapchat, but also made some of us feel lonely

‘While Covid-19’s challenges have changed how we maintain our friendships, the pandemic has also made some of us more generous with our newfound time,’ said Snapchat in a blog post.

‘Visual communication is great for friendships, with memories and images of your bond striking an especially powerful note.

Snapchat’s study, which involved 30,000 people, found 49 per cent of respondents said the lack of contact with friends was a key reason they felt more lonely.

31 per cent, meanwhile, said social distancing had weakened their relationships with friends and only 30 per cent feel their friends are reaching out to them as much as they would like.

Of that 29 per cent, however, there was around a 50:50 split over whether they felt closer or more distant than before the pandemic. 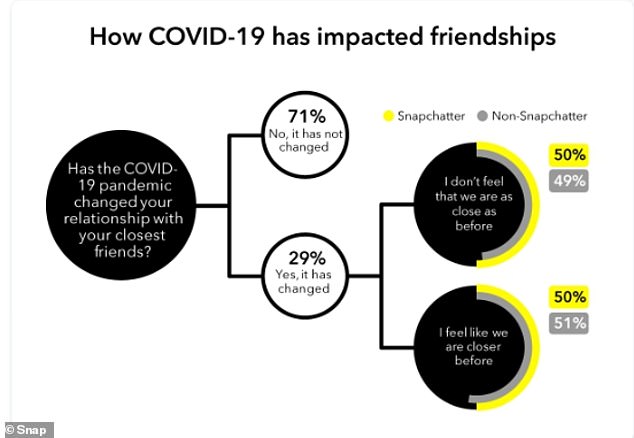 According to the study, 88 per cent of those Brits surveyed said they have lost touch with a close friend from childhood and 70 per cent would now like to rekindle those lost relationships.

Even though Brits would generally respond positively to one of their best friends re-establishing contact, awkwardness is preventing us from reaching out.

More than a quarter of Brits involved in the study – 27 per cent – said they would feel awkward getting back in touch.

Snapchat said 67 per cent would prefer to reconnect digitally, but only 54 per cent of people would know how to.

To try and tackle loneliness, many respondents said they had turned to digital platforms to help them stay in touch with friends.

Snapchat said video calls and visual communication on its platform and several others has helped build ‘a vital bridge between friendships’, both new and old. 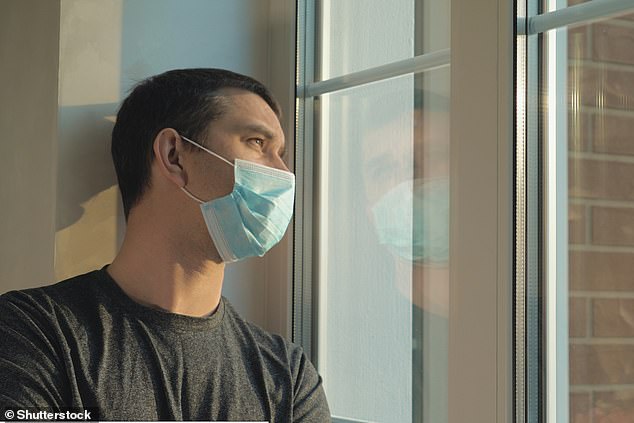 Awkwardness can put Brits off getting in touch with an old friend even when we’re feeling lonely during lockdown, the Snapchat survey revealed

64 per cent said they were using online communication platforms, including Snapchat, Instagram and WhatsApp. more now than before the Covid-19 outbreak.

And 47 per cent of people said the conversations they were having with friends using these tools were deeper than they were before.

Friendship researcher Donya Alinejad from the London School of Economics, who worked with Snapchat on the study, said virtual communications helped create ‘co-presence’ and a ‘feeling of being together when you’re actually physically distant’.

However, Professor Laavanya Kathiravelu at Nanyang Technological University, Singapore suggested digital communications are only a temporary fix for friendships during the current health crisis.

‘Although friendships continue to be maintained through apps, phone calls, and other mediated forms of communication, the disembodied element takes away from the full experience of friendship for many,’ she said. 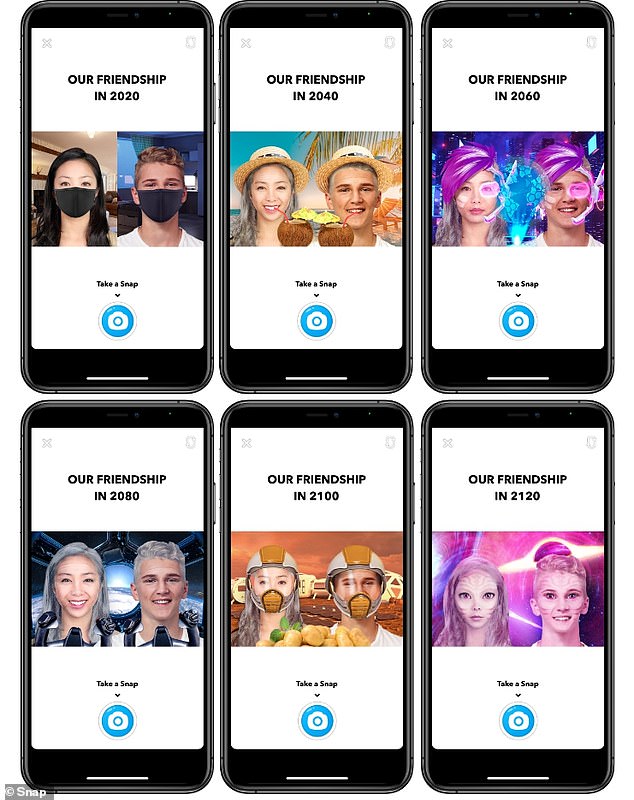 The Friendship Time Capsule, a new feature that allows friends that can’t be together in person to create new shared memories

In response to the findings, Snapchat has announced the launch of its Friendship Time Capsule, where users can create a collaborative photo collage of themselves with a friend.

The tool invites users to each take a selfie, which are overlaid on a range of different scenarios set in the future, including on a spaceship, the surface of Mars or a lunar base.

The tool aims to ‘help Snapchatters show they care for friends when they can’t be together’ or to act as an aid in getting back in touch with a close friend, the platform said.

Snapchat has also published a list of tips and skills on how to be a better friend as part of the Global Friendship Report, which encourages people to listen, stay present and accept responsibility in order to improve existing friendships.

HOW TO USE THE SNAPCHAT FRIENDSHIP CAPSULE 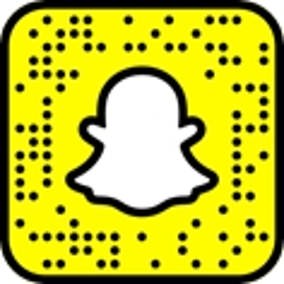 Snapcode above will activate the new feature

· To use the new feature, open up the Snapchat camera and select The Friendship Time Capsule on the carousel.

· If it isn’t there, hover your camera over this snapcode (right) and hold your finger on it.

· Then, take a selfie, select a year, then send it to your chosen friend.

· When your friend does the same, the new feature will put you both into a series of scenarios together (including visiting the Moon, and Mars) from today up to 2120.

· It also uses Snap’s advanced machine learning technology to age you and your friend up, depending on the year you have chosen.