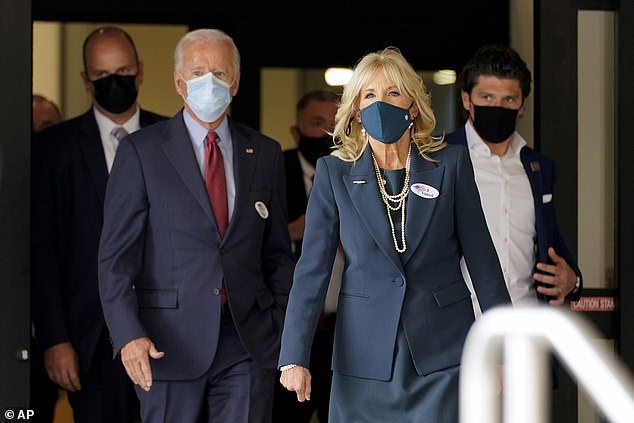 Joe and Jill Biden cast their ballots on Wednesday, voting early in this year’s presidential election in their home state of Delaware as the Democratic nominee prepares to campaign with former President Barack Obama.

The couple voted by appointment, which is the way early voting is conducted in that state. They exited the Carvel Delaware State Building in Wilmington wearing ‘I Voted’ stickers and face masks.

Both campaigns are gearing up for the final six days of the presidential election. Trump is planning a spat of closing rallies, holding multiple ones a day in key battleground states.

Biden, meanwhile, will bring out the party’s big gun: Obama. He and the former president will campaign together in Michigan – their only joint appearance of hte campaign – on Saturday.

Joe and Jill Biden voted in Wilmington, Delaware, on Wednesday

Plans are still be finalized for an exact location for the two men, who served together for eight years in the White House, to hold their event, The Hill newspaper reported.

The Biden appearance with Obama comes as a new poll shows he has taken the lead over Trump in Michigan and Wisconsin, two key battleground states.

A New York Times/Siena College poll showed Biden up eight points in the state, with 49 per cent to Trump’s 41 per cent.

The Democratic nominee leads by 17 points in Wisconsin and seven points in Michigan – two states that Trump carried in 2016 and helped put him in the White House.

The new numbers out of the Washington Post/ABC News poll show Biden is being boosted by his support from women.

In Michigan, Biden trails Trump among men by double digits, and the two are running about even among men in Wisconsin. 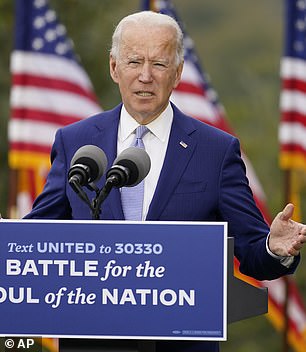 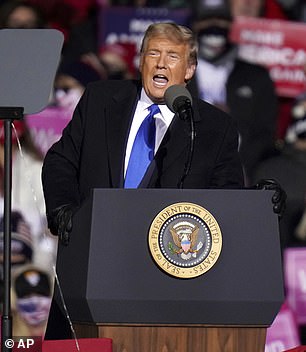 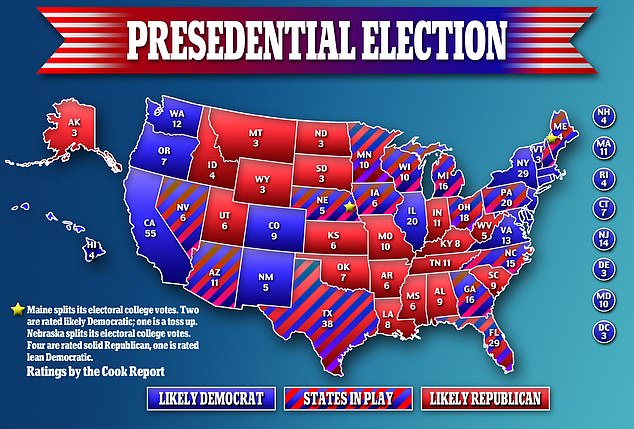 The poll numbers also indicate the coronavirus is having an effect on the election.

The pandemic has disproportionately driven women out of the workforce with some saying the current economic situation should be called a ‘shecession’ as women – particularly women of color – have been so badly effected.

President Trump is aware of his trailing numbers among females.

‘Suburban women, please vote for me,’ Trump has begged at his campaign rallies.

These women, also know as soccer moms and Walmart moms, supported Trump in 2016 but have been turning away from him in the years since. In the 2018 midterm election, they helped hand control of the House to Democrats.

Trump carried both Wisconsin and Michigan by less than 1 point in the 2016 election. He became the first Republican candidate in more than 20 years to carry the states – which were considered part of a ‘blue wall’ for Democratic candidates in the industrial Midwest.

Pennsylvania and Ohio are two other states in the region the president flipped to win the White House.

The president campaigned in Wisconsin on Saturday and was back on Tuesday. He also held a rally in Michigan on Tuesday. Vice President Mike Pence will campaign in the two states on Wednesday.

President Trump will return to Michigan and Wisconsin on Friday, along with a stop in Minnesota. 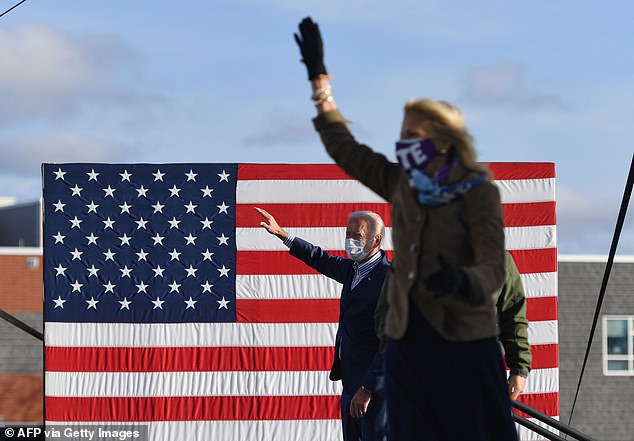 Jill Biden will campaign in Michigan on Thursday; new poll shows women breaking for Joe Biden in Michigan and Wisconsin

Biden’s double digit lead in Wisconsin comes as coronavirus cases hit new record levels there. The state is third in the nation in per capita COVID cases.

Complicating the contest in Wisconsin could be the Monday’s decision from the  Supreme Court, which effectively barred the counting of mail-in ballots received after Election Day.

It raises the question of how many late-arriving votes will be disqualified.

Interest in this year’s election, meanwhile, is hitting record levels.

More than 71 million Americans have already cast their ballot in this year’s election, according to the Election Project.

That interest was echoed in Michigan and Wisconsin, the Washington Post/ABC News poll found.

Nearly 7 in 10 voters in Wisconsin and more than 6 in 10 in Michigan said they are following the presidential campaign very closely. In both states, more than 9 in 10 say they are either certain to vote or already have voted.

Texas, long a Republican stronghold, was declared a toss-up state Wednesday by the respected election forecaster The Cook Political Report – a shocking pronouncement with less than a week to go in the presidential election.

Democrats have long argued the state, with is massive haul of 38 electoral votes, is trending their way thanks to its growing Latino population.

‘Texas’ shift from Lean Republican to Toss Up shouldn’t come as a surprise,’ writes Cook Report National Editor Amy Walter in her analysis. ‘Recent polling in the state — both public and private – shows a 2-4 point race’ between President Donald Trump and Joe Biden.

The RealClearPolitics polling average of polls in Texas shows Trump leading by 2.6 points.

Those numbers reflect the result in the state’s hotly-contested and closely watched Senate race in 2018, where GOP Senator Ted Cruz defeated Democratic rival Beto O’Rourke by a mere three points: 51 per cent to 48 per cent.

A Democrat has not won the state in a presidential election since 1976. Trump won Texas by 9 points in 2016.

A Biden win in Texas would end Trump’s hopes of a second term in the White House.

The Biden campaign is sending running mate Kamala Harris to the Lone Star State on Friday, where she’ll campaign in Fort Worth, McAllen, and Houston.

‘Texas could make Biden president and avert any constitutional nightmare,’ O’Rourke told Politico, referring to concerns among Democrats that Trump will legally contest ballots in battleground states if the 2020 result is close. O’Rourke has been advocating for Biden to campaign in the state.

Additionally, voting is reaching record levels in the state.

As of Tuesday, nearly 8 million Texans had cast ballots, approaching 91% of the entire 2016 vote – a higher percentage than any state in the country, according to the Election Project. 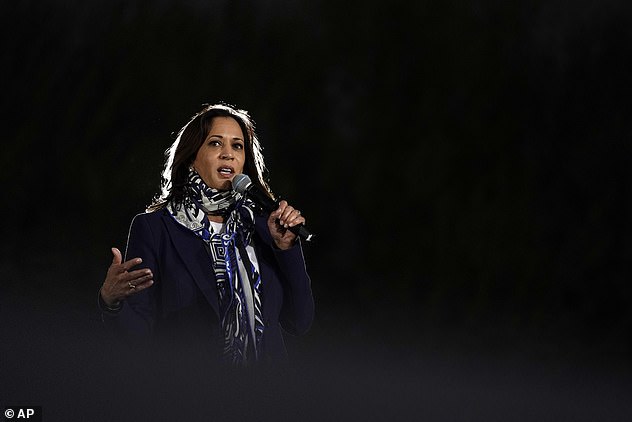 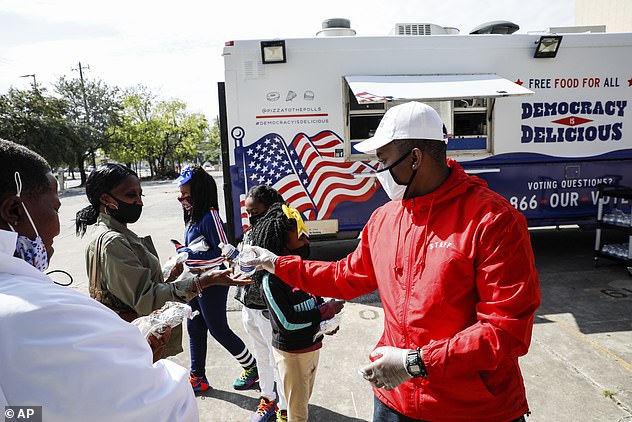 A Pizza to the Polls staff member hands out free food and drinks to local community members in Houston as part of early voting day on Saturday, Oct. 24, when early voting began

Trump has tried to hurt Biden in Texas by attacking his stance on oil and energy, aided by a mistake Biden made in their final presidential debate.

His campaign has tried to turn Biden’s remark about a ‘transition from the oil industry’ into a major scandal.

The president called it ‘perhaps the most shocking admission ever uttered in the history of presidential debates.’

But it’s unclear if the president’s push is catching fire among voters, particularly in the mist of a global pandemic and downward economy.