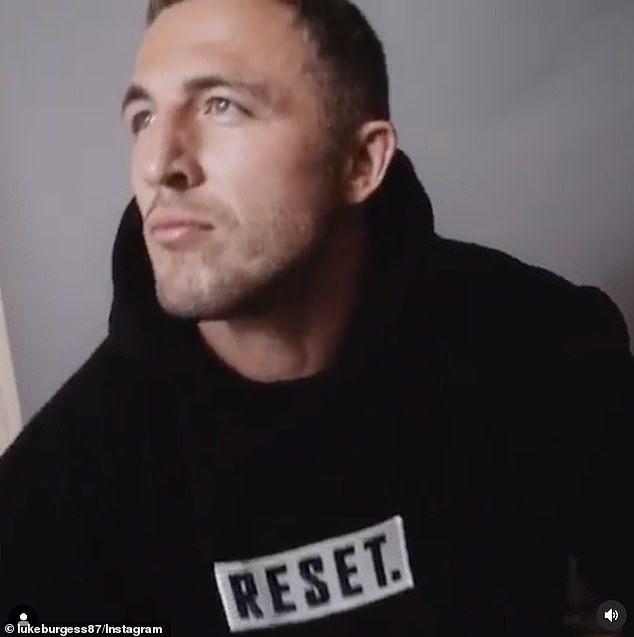 He recently launched his new clothing line with his older brother Luke and younger twin brothers, Thomas and George.

And on Wednesday, Sam Burgess teamed up with Luke and former Bachelorette star Jackson Garlick to promote the new Reset Collection for his clothing line.

In an advertisement for the label, the 31-year-old posed wearing a black jumper and matching coloured shorts.

New collection: Sam Burgess teamed up with his brother Luke and Bachelorette star Jackson Garlick to promote his ‘4B’ clothing range

Luke also showed off the brand’s new T-shirt while Jackson wore a beige jumper with the words ‘Reset’ written along the front.

This comes after Sam was formally stood down from his coaching role at the South Sydney Rabbitohs after claims about his marriage and wild lifestyle were published in The Australian on October 2.

The NRL and NSW Police have both launched investigations into the allegations.

The lawyer acting for Sam Burgess, Mark O’Brien, has strongly denied all allegations. 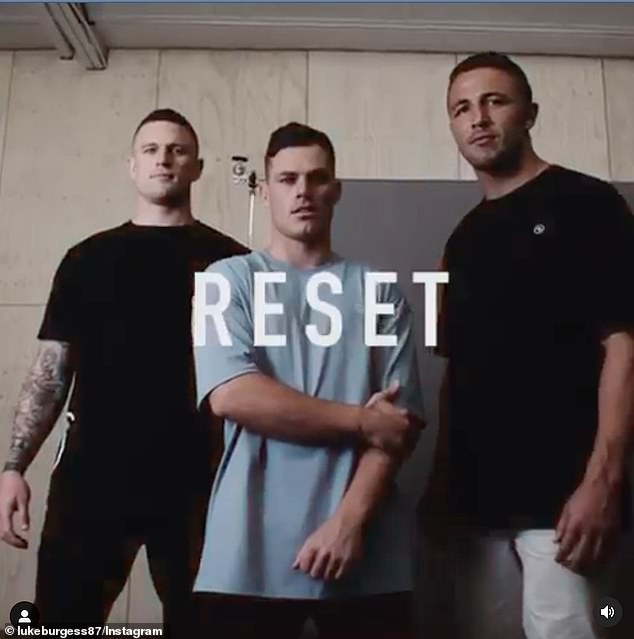 Promo: In an advertisement for the label, the 31-year-old posed wearing a black T-shirt and pants

‘The allegations are false and constitute an indefensible defamation against my client,’ Mr O’Brien said.

Rabbitohs staff members have also been accused of covering up Sam’s alleged indiscretions. It is not alleged that Russell was involved in any cover-up.

‘I thought we had the world at our feet together,’ Phoebe allegedly wrote to the actor. ‘He might need a good friend because he is just not our Sam.’

The article also included text messages Sam allegedly sent to Phoebe, after her initial conversation with the club owner came to light.

‘Phoebe why did you message RC saying everything,’ Sam allegedly wrote. ‘What are you trying to solve here?’ 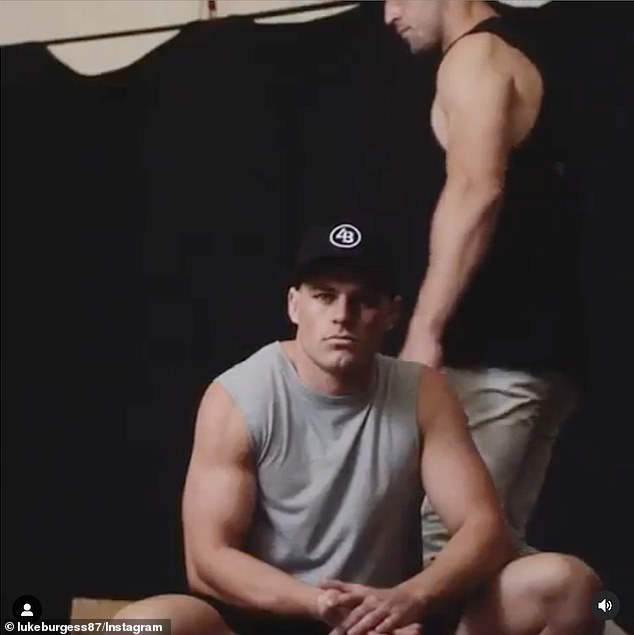 In the wake of the initial article, more bombshell claims about the footballer have come to light.

Sam was staying with his brother Luke at The Establishment, in Sydney’s CBD, on November 5, 2018, following a farewell BBQ for Souths player Jason Clark, The Daily Telegraph reported.

Phoebe was reportedly at home while her husband continued to stretch the festivities over a day.

According to the report, Sam returned home when his mother Julie – known to NRL fans as ‘Mrs B’ – descended on the swanky hotel in the early hours of the evening.

Julie allegedly asked hotel staff for the number of her son’s hotel room and after an hour of convincing, she moved Sam and Luke into a car. 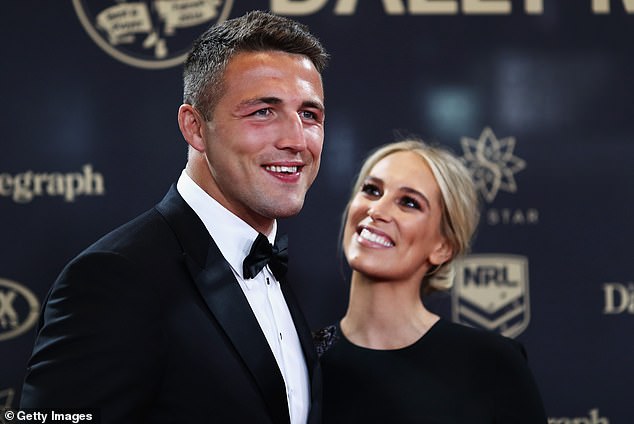 Explosive claims: On October 2, Sam was stood down from his coaching role at the South Sydney Rabbitohs after claims about his marriage and wild lifestyle were published in The Australian

‘Julie virtually had to drag Sam and Luke to her car by their ears, but somehow she got them out of that room and into her car,’ a source claimed.

NRL CEO Andrew Abdo said the league has launched an investigation into the claims made by The Australian, but they will not take action based off allegations.

‘The action we have taken is to initiate the investigation,’ he said last Friday.

‘Because these are allegations, we don’t have the facts before us, we’re not going to be taking any further action until we have the information needed to do that.

‘We will look to work with the club to find out what happened and to get to the bottom of the facts,’ he said. 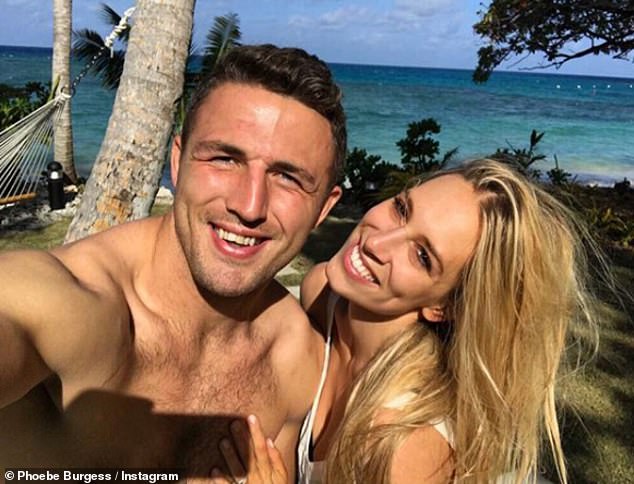 Denial: The lawyer acting for Burgess, Mark O’Brien, has strongly denied all allegations

‘We will also co-operate with the NSW Police, who have also begun an investigation into the matter. If these allegations are proven, we will take the strongest possible action that we can.’

NSW Police said they would be conducting their own investigation.

South Sydney released a statement saying the allegations were ‘very concerning’ and they would be treated with the ‘utmost seriousness’.

‘There is no place in our society for violence, harassment or abuse against women. If anyone is found guilty of allegations of this nature, the club will take the strongest possible action,’ a Rabbitohs spokesperson said. 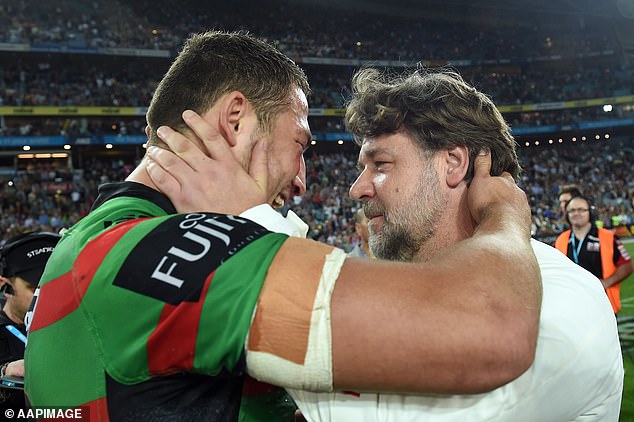 Texts: The article included texts Phoebe allegedly sent to Hollywood star Russell Crowe (right), who part owns the Rabbitohs NRL club. Rabbitohs staff have also been accused of covering up Sam’s alleged indiscretions. It is not alleged that Russell was involved in any cover-up