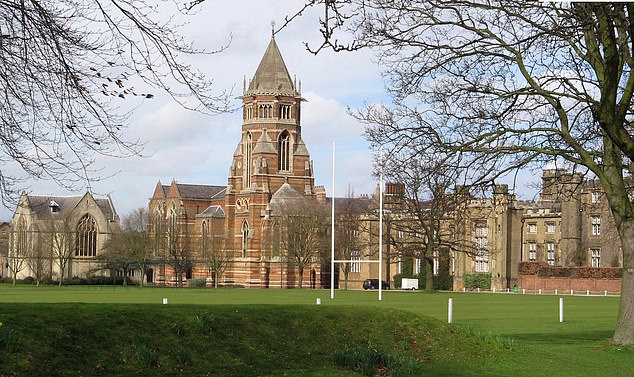 This was the place where Rupert Brooke and Matthew Arnold penned their first verses, and has spawned literary talents such as Alice In Wonderland author Lewis Carroll, Salman Rushdie and Foyle’s War creator Anthony Horowitz.

But Rugby School — setting for Thomas Hughes’s Victorian classic, Tom Brown’s School Days — has appalled alumni and academics alike by announcing that it is to sell off a treasury of nearly 300 books, including four Shakespeare folios, which are estimated to fetch £100,000.

Acclaimed novelist A.N. Wilson, who was at Rugby in the 1960s, is reduced to apoplexy, describing governors at the £37,000-a-year school as ‘complete vandals’.

‘It’s terrible. I would never dream now of leaving anything to that school because they would just flog it,’ he assures me, pointing out that next month’s auction follows the sale of much of the school’s glorious art collection at Christie’s, which raised nearly £15 million.

‘From being living books, housed in an institution with a strong Shakespearean heritage, in Shakespeare’s home region, they are likely to dwindle now into being mere investments,’ he tells me, pointing out that museum and university library budgets are currently under immense pressure because of the Covid pandemic.

Professor Dobson adds that the Rugby School collection, which includes first editions of such classics as Robinson Crusoe and Dickens’s A Christmas Carol, is now ‘more likely to vanish into private collections than to be consulted by experts’.

Peter Green, Rugby’s head — or Executive Head Master, as he is designated — explains the decision to sell the books by saying that the money raised will help fund ‘bursary support’.

The point is reiterated by a school spokeswoman. ‘Obviously, Rugby is a school, not a museum. 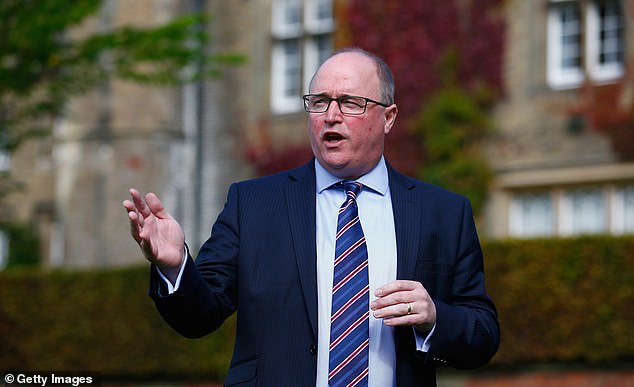 The paintings were becoming impossible to look after and insure, and the Governing Body decided then — as they have now about these books — that they should be sold to benefit the current and future students by way of making bursary provision greater.’

Wilson is unconvinced. ‘They say it will be spent on a bursary, but how do you know?’ he asks. ‘Who can you trust?’

‘To sell is to betray a previous generation’s generosity,’ reflects another distraught Old Rugbeian.

Jeremy Clarkson can embark on a victory lap after seeing off parish councillors trying to thwart his burgeoning business at Diddly Squat Farm in West Oxfordshire.

Earlier this year, the former Top Gear presenter opened a farm shop, Squat Shop, but he soon got snarled up in a spat with Chadlington Parish Council, which accused him of flouting planning regulations and coronavirus guidelines, and causing haphazard parking.

However, permission has now been granted subject to certain restrictions, including a reminder that he can stock only ‘local’ produce.

Motormouth Clarkson, who is worth £50 million, can barely contain his glee.

‘I’d like to thank the council for being so supportive of what’s turning into quite a good little business,’ he tells me.

While many women prefer to cover themselves up when pregnant , actress and model Emily Ratajkowski is determined to keep her full figure on display.

The London-born 29- year-old, who is married to film producer Sebastian Bear-McClard, is 20 weeks pregnant and happily showed off her new bump this week when she stepped out in New York wearing a tight black cut-out dress.

The English professor’s daughter, who made her Hollywood debut in Gone Girl playing Ben Af f leck’s clandestine lover, reveals she doesn’t want to know the baby’s gender just yet.

‘We won’t know until our child is 18 and they’ll let us know then,’ she says.

Is Hugh Grant mellowing now he has become a father?

The Love Actually star, 60, who has five children — three by his wife Anna Eberstein — says he missed his family so much when filming his new TV series, The Undoing, in New York that he cried.

He recalls: ‘At first, I thought what a fantastic opportunity to get away from my screaming children. But I missed them so much.

Almost every scene I acted in made me cry. Once, the director Susanne Bier had to say: ‘Hugh, you’re only asking for a cup of coffee.’

The 51-year-old eco-activist, who encourages people to wear the same clothes repeatedly to make fashion more sustainable, yesterday laid bare the pitfalls of exhausting one’s wardrobe when she posted a picture of herself sporting pink socks so ragged they had huge holes in the heels. 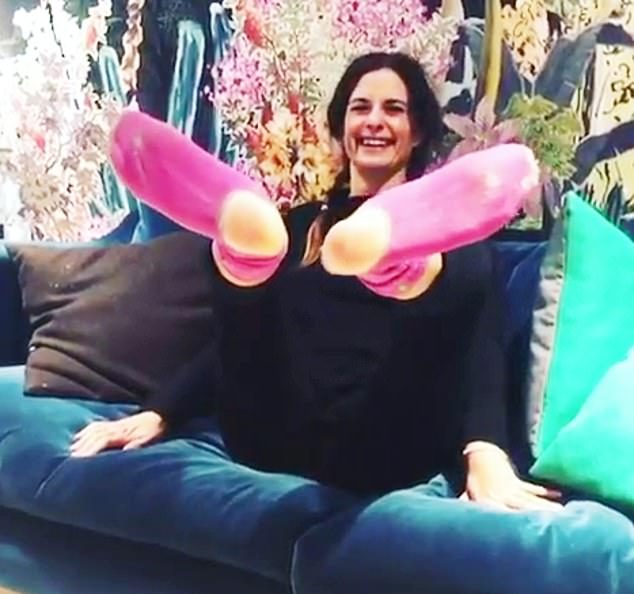 ‘When they point out that I am too strict about the “beyond 30 wears” rule,’ she captioned it, admitting that her socks are ‘clearly too old’.

Many millionaires bemoan the fate of their offspring, but hedge funder Sir Paul Marshall has revealed he is envious of his son Winston, a founding member of folk rock group Mumford & Sons.

According to Sir Paul, whose wealth is estimated at £630 million, Winston has a ‘much better career than mine.

The speed with which they went on with their first album to getting Brit awards and Grammys was amazing.’

Keef gets his own cameo

Talk about keeping it in the family. Rolling Stones guitarist Keith Richards has hired his son-in-law to shoot his music video.

Keef has re-released his 1992 solo song, Hate It When You Leave, and roped in his daughter’s film director husband, Jacques Naude, to help.

Naude, who married model Alexandra, 34, last year, depicts everyday scenes in the video, including a man mowing a lawn, a child learning to play the drums and young girls at cheerleading practice.

Of course, Keef, 76, features, too — sitting outside a house near fresh-cut flowers. ‘It’s something for your ears and eyes and for your hearts,’ says the rocker, giving his approval of Jacques’s work.

Now artist Ivy Getty, who stands to inherit a chunk of her family’s fortune, is hoping to influence American politics with her wacky sense of style. 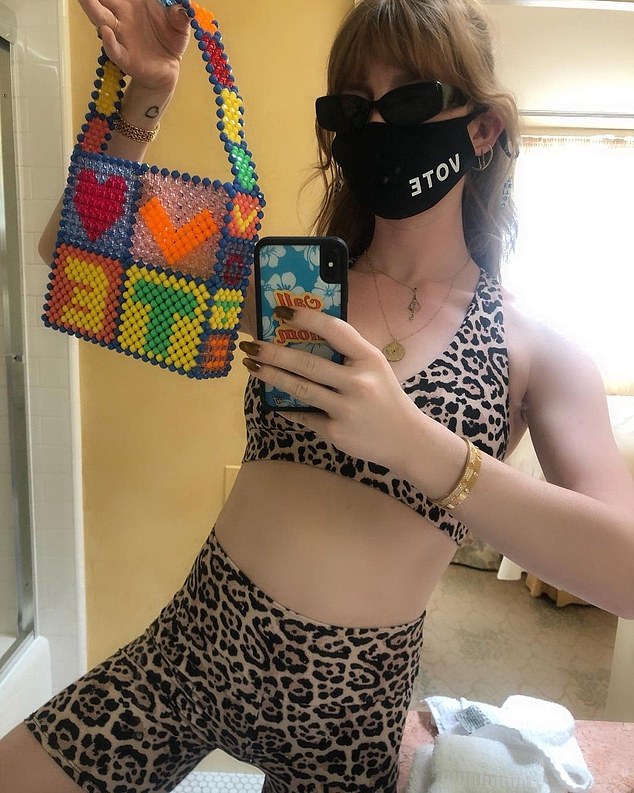 Ahead of the presidential election next week, the 25-year-old, who lives in San Francisco, posted a picture of herself in a leopard-print crop top and shorts teamed with a colourful bag and black face mask proclaiming ‘VOTE’.

‘I’m voting for Biden,’ she tells me. ‘I wear as much voting-related clothing to remind people to vote and register to do so.’

‘We’ve seen pop stars streaming their latest songs live from their kitchen. Let’s agree on one thing — however talented they are, it’s boring. Boring!’ says Ulvaeus.

‘As a former pop star myself, I take the liberty to say that. It will never be a substitute for a packed stadium or a sold-out theatre performance in the West End or on Broadway.’

Cue for an ABBA reunion tour, then?